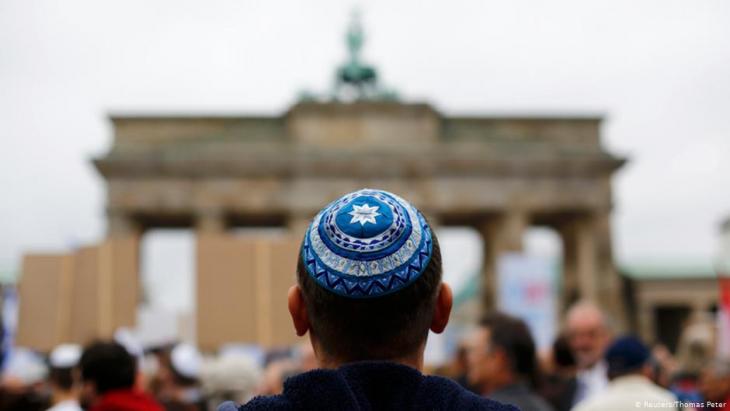 Jewish voices are much more diverse than the public often sees. Jewish men and women who oppose the injustice of Israeli occupation in the West Bank deserve our respect and protection against defamation, writes Charlotte Wiedemann

The "Radical Jewish Voices" in Britain are selling a sticker emblazoned with the words "Make Anarchism Jewish again!" in their online shop. The sticker is a reminder of a once-vibrant movement: for almost 100 years, the anarchist Yiddish newspaper Fraye Arbayter Shtime (Free Voice of Labour) was published in New York.

Our culture of remembrance features very few references to a Jewish life beyond a middle class that subscribes to state and capitalism. Jews are victims – as if they had never struggled, as if they had never been part of movements that fought for a more just world. In this historical configuration, there is only room for Zionism – not for the opposition.

Among other things, this view of political history is in play whenever left-wing dissident Judaism with German or Israeli roots is met with so much mistrust as is currently the case in Germany. Mistrust and repulsion are at the ready long before words like "apartheid" are even spoken. An incalculable Judaism disturbs the peace, forces us to think and reflect.

The fact that I call Jewish men and women who oppose the injustice of occupation "dissident" is just as much a product of the German situation. Perhaps it would never even occur to me to do so if I were American.

Respect rather than defamation

The events of recent weeks have provided an opportunity to hear a whole range of Jewish voices in the USA and Europe that – with regard to the occupation policy – are united by the slogan "not in my name". This gives us a hint of all the different things that Judaism in the diaspora can mean. Take, for example, the "Judeobolschewiener*innen" (Judeo-Bolshe-Viennese) in Austria. This collective is based on the principle of doikayt, a Yiddish term for social emancipation in the diaspora that opposes all kinds of nationalistic identification.

In Germany, refugees are being blamed for anti-Semitism, with some even claiming that it is 'imported'. https://t.co/ykh6Ph5zJv

The collective's response to anti-Semitism is based on the intersectional principle: like racism, the hatred of Jews is fought as a form of discrimination and is not viewed separately as the mother of all evils.

This stance is predestined to cause controversy – especially in Austria or Germany. But Jews who are willing, in solidarity with Palestine, to stand up to the brand of anti-Semitism fed by despair over a commonly-held injustice deserve respect, not defamation, in my opinion.

This certainly does not oblige us to like every single way in which Jewish opposition is voiced. I am reminded in this context of a scene in Hebron, where a representative of the organisation Breaking the Silence explained the segregated use of a road (Palestinians segregated from Jewish settlers) with the words "Hey, you're German, what does that remind you of?" The answer the representative was looking for was "ghetto", but not one of those present could say it out loud. Some of the things said by dissident Israelis in Germany can sometimes have a shrill edge – akin to someone leaving the family gathering to demonstratively stand outside the front door and flick a cigarette butt into the front garden.

The pristine and the grubby

In short, it took me quite some time to approach the phenomenon of left-wing Jewishness. Two years ago, I hesitantly went public with my stance in the debate about the awarding of the Gottingen Peace Prize, defending the winner, the "Juedische Stimme fuer gerechten Frieden in Nahost“ (Jewish Voice for a Just Peace in the Middle East), against accusations of anti-Semitism. A short time later, I was being accused of exactly the same thing myself. It takes so little to be accused of the worst thing I can imagine. I recently read one column that said I sounded like Hitler. Others have said I sound like Martin Walser. Such comparisons must not be taken seriously, certainly, but where does taking things seriously begin? (And if it takes me a long time to feel my way to the answer, how is a Palestinian woman supposed to do so?)

My impulse to defend myself by providing proof of how much the subject of the Holocaust has shaped my life is laughable. Nonsense! Those who slap this devastating label on other people with such ease are never interested in biographies, identity, or what has made them who they are; they just want to draw a line in the sand: on one side the pristine; on the other, the grubby.

For dissident Jewish men and women, particularly in Germany, it is much more painful that what has made them who they are is of no significance. Educationalist Michael Sappir recently wrote that many people just don't understand how much "effort to overcome, self-criticism and self-formation" it has taken for Israelis like himself to become radical opponents of the occupation policy. Some descendants of those responsible for the Holocaust surmise that the Holocaust simply does not hold the same significance for such Jews.

Jewish dissidence is a challenge

It is always difficult to be marginalised in what is already a small minority. And to then oppose the Israel-related construct that gives the Germans so much relief ... In the past, I didn't want to get intellectually involved in this complexity of Jewish dissidence – there was no handrail in sight. Today, I think that those on the left have to face this challenge.

As an older citizen, I would say that because Germany, after initial reluctance, assumed full responsibility for the Shoah, a large proportion of my generation has settled into a thought mainstream that we believe we have created or at least had a part in creating. Don't touch what has been achieved, this comfy state of being-in-the-middle! But nothing is achieved for eternity. Just look at the opinion polls. There are reports of teachers describing how far from many young people's minds (and not only those with migrant backgrounds) the Holocaust is. If these reports are accurate, it must be clear that new approaches are needed.

Today, it is largely minority groups that are showing us how anti-Fascism and radical solidarity can be combined while at the same time overcoming some very German psychology. Jewish dissidence is a very small, yet significant, part of this new phenomenon.

Home
Print
Newsletter
More on this topic
Anti-Semitism: Separating anti-Semitism from criticism of IsraelInterview with Amos Oz: ''I love Israel even in times when I don't like it''Hagit Ofran of Peace Now: The Zionist still holding a candle for peace and equalityBreaking the Silence: The ″turncoat″ sons of Israel
Related Topics
Anti-Semitism, Colonialism, Democracy and civil society, Gaza War, History of the Near and Middle East, Israeli-Palestinian conflict, Judaism | Jews
All Topics

Iranian artist Parastou Forouhar has lived in Germany since 1991. Full of rage, just like the protesters, she hasn't yet given up on the idea of justice. By Julia Hitz END_OF_DOCUMENT_TOKEN_TO_BE_REPLACED

Unflattering terms were used at a German Football Association human rights congress aimed at "intensifying the discussion" ahead of the World Cup. One speaker in particular made ... END_OF_DOCUMENT_TOKEN_TO_BE_REPLACED

Fariduddin Attar’s "The Conference of the Birds", one of the seminal works of Islamic mysticism, has recently been published in sumptuously illustrated German translation. It ... END_OF_DOCUMENT_TOKEN_TO_BE_REPLACED

Egyptian authorities have Mada Masr in their sights once again after critical reporting. But the editor of the country's last independent news source is adamant they will continue ... END_OF_DOCUMENT_TOKEN_TO_BE_REPLACED

Like Christianity, Europe's history is one of migration. Both have strong roots in the Orient and in cultures thousands of years old. Cultural historian Bernhard Braun invites us ... END_OF_DOCUMENT_TOKEN_TO_BE_REPLACED
Author:
Charlotte Wiedemann
Date:
Mail:
Send via mail

END_OF_DOCUMENT_TOKEN_TO_BE_REPLACED
Social media
and networks
Subscribe to our
newsletter