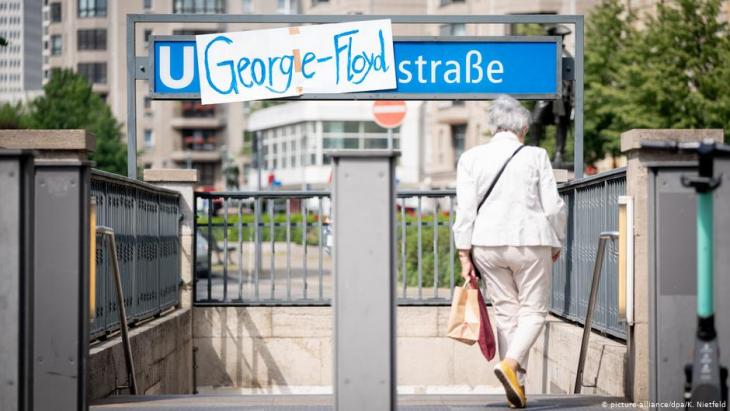 Debate about racism
Germany is not the anti-racist model the U.S. is looking for

Germany is often lauded for its atonement for its Nazi past. Yet the country upheld the structures that allowed – and allow – racism to flourish and Germanness to be intertwined with whiteness, writes Ursula Moffitt

Over the past few weeks, many social media posts have heralded Germany as a model for reckoning with past atrocities. This narrative is not new, but it has gained traction as statues commemorating Confederate generals, colonial leaders and others are torn down.

Since the student movements of the 1960s turned fraught silence into action, countless Holocaust memorials have been erected and former concentration camps transformed into educational facilities. These are unquestionably good things. Yet as we collectively grapple with how to move forward today, Germany shows us that atoning for past sins does little if the systems that allowed for them are not dismantled.

As an exchange student nearly 20 years ago, I stayed with a Turkish-German family who helped disabuse me of a whitewashed picture of contemporary Germany. Years later, I moved to Berlin for one year, which became eight. I returned to the US last fall with a doctorate in German national identity in relation to race and racism.

While working on my doctorate, I taught in the teacher training college at the University of Potsdam, focusing on historical and present inequities. Most of my students had never learned about German colonialism, and many were reticent to fill that gap. One asked, "We are already told how awful we are for World War II, why do we have to learn about other terrible things from Germany's past?" 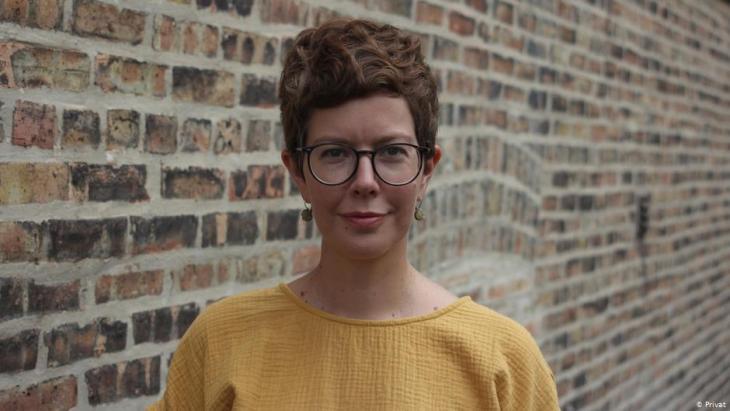 "Since the student movements of the 1960s turned fraught silence into action, countless Holocaust memorials have been erected and former concentration camps transformed into educational facilities. These are unquestionably good things. Yet as we collectively grapple with how to move forward today, Germany shows us that atoning for past sins does little if the systems that allowed for them are not dismantled," writes Ursula Moffitt (pictured here)

Confronting racism became part of my curriculum, though my white German colleagues told me I was overreacting, interpreting things wrong. White Germans often chastise Americans for their "obsession" with race, but I learned in Germany that not naming race is one of the most powerful ways to maintain a racially stratified society. I say "white Germans" intentionally. Though Rasse was removed from use following the Holocaust, the colour-blind lacuna this created provided space for systemic racism while making it difficult to name, track or condemn.

For centuries, blood-based belonging has guided policies and everyday notions of Germanness. In 1999, a law was passed broadening non-ancestry based citizenship, legally reflecting existing diversity in the citizenry. It was not until 2014, however, that dual citizenship was opened to children of non-EU citizens, who previously had to choose between gaining German citizenship or maintaining that of their parents.

As part of my doctoral research, I interviewed Turkish-German young adults, most of whom faced this choice and were angry at having to prove allegiance to the country where they were born and raised. Many noted that despite feeling German, a passport would not change that they are viewed as perpetual others by many white Germans.

Until the early 2000s, it was normative to discuss "Germans" and "foreigners", with the latter referring to perceived non-Germans. I was shocked to find this language in school-based research at the University of Potsdam in 2014. I was told it was for clarity — children can discern between "Germans" and "foreigners". When I brought up racism, I received a lecture on my own foreignness.

"Migrant background" was introduced in the German census in 2004 to track diversity – without naming race – and has since become ubiquitous. Often shortened to "migrant", regardless of where one is born, it's used almost exclusively to describe people of colour, including Germans of colour, though "German" is notably absent.

Unlike the understanding of race as a social construct with material impact shared by most in the US, Rasse is frozen as pseudo-scientific, biological – the definition used by colonisers and Nazis. Green party co-chair Robert Habeck, in arguing to remove Rasse from the German constitution, stated, "There is no such thing as race, there are only people." While well intentioned, such colour-blindness washes over racism, upholding rather than dismantling the structures that allow it to flourish. A new cultural reckoning is needed, not with the Holocaust, but with how Germanness intertwines with whiteness.

Who has access to citizenship, who is othered as a "migrant", and who is stopped by the police are shaped by racialised notions of belonging that predate World War II. Lauding Germany for how it "dealt" with its past makes ongoing racism today invisible. Monuments were never built to the Nazi past, but neither was that past adequately situated with what came before, or what has happened since. This is a mistake we can learn from.

Ursula Moffitt received her doctorate in psychology from the University of Potsdam in Germany. She is now a postdoctoral scholar at Northwestern University in the US, where she studies contextualised racial identity development.

The devaluation of the Egyptian pound combined with rising food prices is taking its toll on Egypt. More and more people are slipping into poverty. Karim El-Gawhary reports from ... END_OF_DOCUMENT_TOKEN_TO_BE_REPLACED

Since returning to power in Afghanistan, the Taliban have steadily eroded the rights and opportunities of women and girls, particularly their access to education. But Afghans are ... END_OF_DOCUMENT_TOKEN_TO_BE_REPLACED

The book "The Invention of the Maghreb: between Africa and the Middle East" prompts us to review basic terminology. This includes terms that we use almost every day as if they are ... END_OF_DOCUMENT_TOKEN_TO_BE_REPLACED

Tunisia has been going through a severe economic and political crisis in recent years. More than one in three young people there are unemployed. For many skilled, qualified and ... END_OF_DOCUMENT_TOKEN_TO_BE_REPLACED

At the end of every year, the team at Qantara.de gives you a run-down of the ten most-read articles on the site over the past 12 months. Here is a quick overview of the stories ... END_OF_DOCUMENT_TOKEN_TO_BE_REPLACED

The government in the Netherlands, one of the last European nations to abolish slavery, has made an historic apology. But some feel that there is still a long way to go. By Ella ... END_OF_DOCUMENT_TOKEN_TO_BE_REPLACED
Author:
Ursula Moffitt
Date:
Mail:
Send via mail

END_OF_DOCUMENT_TOKEN_TO_BE_REPLACED
Social media
and networks
Subscribe to our
newsletter