Debate between Necla Kelek and Tariq Ramadan
Who's Afraid of Euro-Islam?

Europe has long hotly debated the role played by Islam in the public sphere. Two of today's most controversial figures recently faced off in a debate: Necla Kelek and Tariq Ramadan. A report from Berlin by Sarah Mersch

Europe has long hotly debated the role played by Islam in the public sphere. Two of today's most controversial figures recently faced off in a debate: Turkish-born German sociologist Necla Kelek and Swiss Muslim philosopher Tariq Ramadan. A report from Berlin by Sarah Mersch 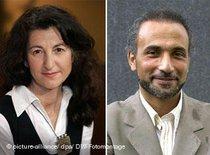 ​​"The white German middle class – that's a thing of the past" and the German majority population had better get used to it as quickly as possible, says Tariq Ramadan, the most prominent and controversial representative of the European Muslim community.

It just so happens that the majority of the audience attending this debate at the taz Conference in Berlin (17-19 April) belongs to the "white German middle class," but Ramadan doesn't see his comments as a threat to his listeners. Quite the contrary, he says that he favours an open dialogue between Muslim immigrants and mainstream European society.

Over the past few years, Islam has risen to become the leading topic of debate among Germans, leaving the country basically divided into two camps, each with its diverging points of view. Each brands the other as either "Islamophobes" or "multi-cultural bleeding-heart liberals". This explains why "Who's afraid of Euro-Islam?" was chosen as the title of the debate.

The two speakers on the stage reflected these two camps. On the one hand, there was Necla Kelek, who represents the European "Islam-light" faction, which assumes that Islam has a "hidden agenda," and therefore calls on Muslims to assimilate completely. In Germany, this camp knows that it can rely on the backing of the conservative establishment and the support of a large number of feminists, above all Germany's foremost defender of women's rights, Alice Schwarzer. 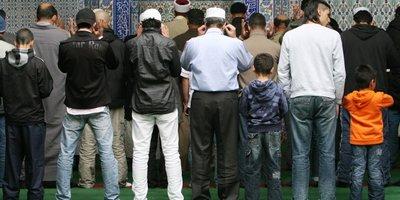 Islam is an integral part of Germany, but the fact that it is increasingly visible in the public sphere has frightened many Europeans, says Tariq Ramadan

​​On the other, there was Tariq Ramadan, an enigmatic intellectual and brilliant speaker who, depending on one's point of view, is perceived either as the great hope of European reformist Islam or a dangerous demagogue who does the bidding of conservative representatives of Islam.

Muslims in Europe are being "Islamicized"

Both debaters agreed with each other on one point, however. In recent years, immigrants in Europe are increasingly being defined according to their religion and less according to the cultural characteristics of their countries of origin. Ramadan criticized this development as "attributions by mainstream society."

Kelek's theory, however, goes in a completely different direction. "These people came as Turks, now they are demanding services from the German state as Muslims." Kelek, who sees herself as a secular European Muslim, sees the growing emphasis on religion as an expression of a lack of integration – primarily in the settings where it is collectively practiced, in other words, in mosques.

According to Kelek, most mosque associations bolster the political influence of their countries of origin and preach an extremely conservative interpretation of Islam, which is inconsistent with the secular society that is the norm in Europe.

The new public visibility of Muslims has triggered fears in Europe, said Ramadan in his opening remarks. He said that the current debate is based on irrational fears instead of facts and statistics. At that moment, a question came from the audience: "Ms Kelek, are you actually afraid of Mr Ramadan?" 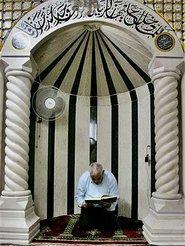 ​​Kelek looked Ramadan squarely in the eye and launched a counterattack, fulminating against Islamic headscarves and the oppression of women. "The greatest German achievement is the sexual liberation of women."

The sociologist remained unimpressed, however, when Ramadan replied that forcing women to wear headscarves was a violation of human rights, adding that he also supports sexual freedoms and that the Koran must be understood within the context of its creation. The debate ended, as is so often the case in Germany and Europe, with both sides feeling confirmed in their prejudices.

Kelek might be right when she condemns the Islamic associations in Germany as "archconservative", and Ramadan does occasionally voice opinions that are thoroughly conservative, but all of this was lost in the general agitation of the atmosphere.

The debate also failed to touch on other issues, such as the fact that the increasing number of people turning to religion is an indication of a low level of education and a lack of career opportunities and that many imams are now preaching in German.

"As long as they continue like this and jump down each other's throat instead of talking about something concrete, integration doesn't stand a chance," complained a woman in the audience.

Conference with Jürgen Habermas and Tariq Ramadan
No Europe without Muslims
The integration of Europe's Muslims has long since passed from a project to reality, says Tariq Ramadan. At a recent conference, the controversial Islamic theologian met up with the German philosopher Jürgen Habermas. What shape will the future relationship between modern Europe and Islam take? Arno Widmann reports

Portrait Tariq Ramadan
Role-Model for Muslim Youths throughout Europe
Islamic scholar Tariq Ramadan is the idol of the Parisian suburbs. He is fighting for a modern Islam and against what he calls "Jewish intellectuals". Now the US administration has revoked his visa. By Jörg Lau

END_OF_DOCUMENT_TOKEN_TO_BE_REPLACED
Social media
and networks
Subscribe to our
newsletter