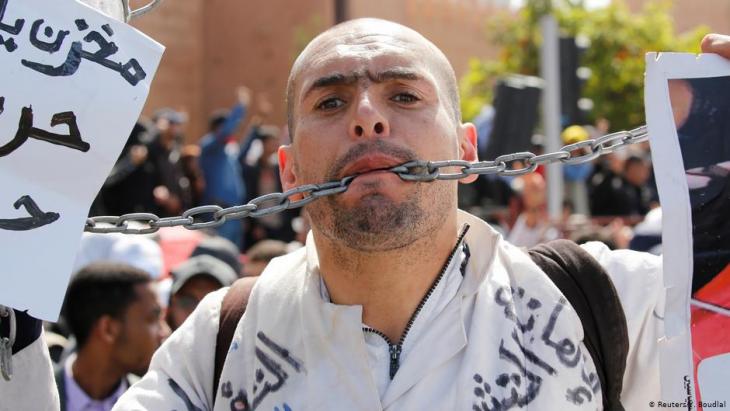 Morocco's rule of law, human rights and freedom of the press are under attack. According to political scientist Mohamed Taifouri, although the 2011 constitution includes a large number of freedoms, the state repression that was thought to have been overcome is making a comeback

The actual manifestations of Morocco's regression vary, as do its methods, depending on the sphere of activity: from a political stalemate, a monopolistic economy, a tightening of the noose on civil society, to restrictions on the press and the media by lavishing praise on the chorus of acolytes within their ranks.

The process picked up speed as decision-makers gave greater weight to security in their approach to many issues facing Morocco, such as the Rif movement, the demonstrations in Jerada and the case of the contract teachers. In so doing, they contradicted the rumours circulating that security measures previously taken by the government had been wrongly conceived and that the State was just waiting for the right moment to correct them.

The Makhzen or deep state is relying on force and violence in order to recoup past losses and rebuild its image which, it was believed, had been shaken under pressure from the street during the days of the Arab Spring.

Unable to withstand the pressure

Most of the groups involved including the parties, the unions and civil organisations have picked up on this, abandoning their previously confrontational stances as a result. They have toned down the criticism in their rhetoric, and the scale of opposition to the state, to the government and to public policies is now far less than it was during the early years following the re-drafting of the constitution.

At the same time, a group of democrats (intellectuals, academics, lawyers, journalists and artists) are continuing to push forward and to make the most of the little freedom they still have. They have maintained the struggle for democracy and continue to confront tyranny. They seek to do this by exposing corruption and those behind it, based primarily on the precedents in the constitution, as well as the gains which have been achieved in the years since it was promulgated.

The curtain was brought down on the Moroccan version of the Arab Spring by the Makhzen reverting to its old tricks. Despite this, a group of mischievous dreamers, or "nutters" as the previous Minister of Finance used to call them, continue to needle the bureaucrats every now and then with their dreams of building a democracy. This is driving the state’s functionaries to look for ways of bringing these daydreamers "to their senses" and remind them that the days of revolution are over, for good. 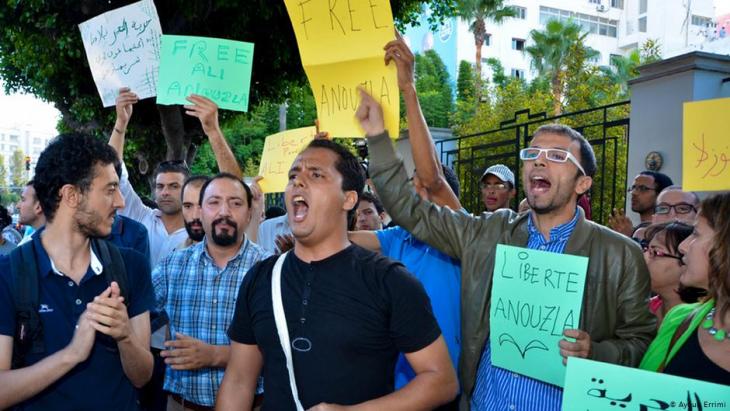 Solidarity with Ali Anouzla: the independent Moroccan journalist constantly uncovers human rights violations through his investigative research. He regularly takes up taboo topics such as criticism of the king, government corruption, torture and unfair trials. In autumn 2013 Anouzla spent five weeks in prison before being released on bail

These visionaries have only the independent press to get their message out, all the more so since the regime has begun carefully targetting well-known journalists. In this way, the regime has gone after people with a long track record as advocates of democracy and who as journalists expose the dirty games played by both the allies of tyranny and those who move in the circles of power.

The regime is eager to avoid being accused of restricting the freedom of the press and the media, and it is not about to compromise its already poor standing: Morocco ranks 135th in the world and 39th in Africa on the World Press Freedom Index. To this end, it is seeking to hound dissenting voices by bringing criminal cases of an ‘ethical’ or ‘security’ nature, using the tabloid press to defame the individuals, even before any conviction has been secured.

It began with the journalist Ali Anouzla, editor-in-chief of Lakome news website, after he wrote an expose in July 2013 about the royal pardon which was granted to the Spanish serial child rapist Daniel Galvan. Two months later, Anouzla was arrested by the authorities, in accordance with the country’s law on terrorism, after his website published a report about al-Qaida in the Islamic Maghreb (AQIM), which included a link to a Spanish news website allegedly containing a video by AQIM.

The country's national election on 8 September will likely bring new government. But neither experts nor locals expect it to bring long-promised change, writes Cathrin Schaer END_OF_DOCUMENT_TOKEN_TO_BE_REPLACED

The coronavirus pandemic has turned lives upside down all over the world. In the Middle Ages, however, people lived with epidemics all the time. The best and most famous ... END_OF_DOCUMENT_TOKEN_TO_BE_REPLACED

A bird's eye view of eight hundred years of history: Brian A. Catlos tells the story of Al-Andalus in the style of a streaming series and deconstructs the myths of the Reconquista ... END_OF_DOCUMENT_TOKEN_TO_BE_REPLACED

In his new book, "Tangier/Gibraltar- A Tale of one city: An Ethnography", Dieter Haller looks at how shared experiences and practices have created a unique relationship and a ... END_OF_DOCUMENT_TOKEN_TO_BE_REPLACED

While Europe and North America experience something like a return to normality with relatively high vaccination provision and take-up rates, the rest of the world is struggling to ... END_OF_DOCUMENT_TOKEN_TO_BE_REPLACED

Algerian scholar Said Djabelkhir rejects the charge of "offending Islam". In interview with Ismail Assam, he maintains that he has been wilfully misconstrued. At the same time, he ... END_OF_DOCUMENT_TOKEN_TO_BE_REPLACED
Author:
Mohamed Taifouri
Date:
Mail:
Send via mail

END_OF_DOCUMENT_TOKEN_TO_BE_REPLACED
Social media
and networks
Subscribe to our
newsletter