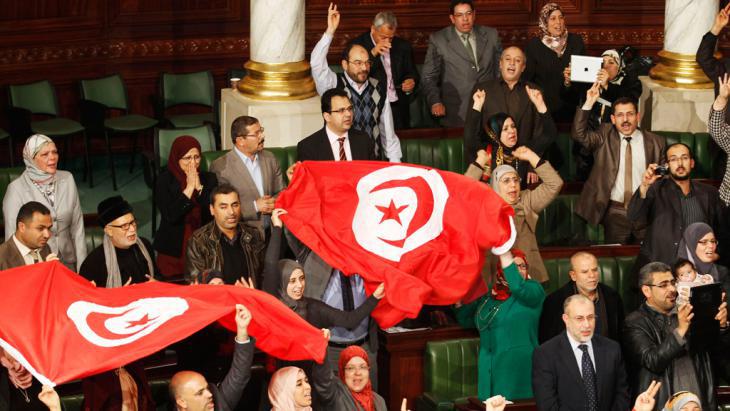 Tunisia is the only one of the Arab Spring nations that is on the road to democracy. Almost four years after the first protests, which began in the south, this North African country has become a beacon of light for the whole Arab world. But in spite of its successes to date, Tunisia still faces some huge challenges. By Ilyas Saliba

The celebrated passing of the new constitution at the start of the year, which became the most progressive constitution anywhere in the region, marked the first milestone on this rocky road to democracy.

From the beginning, the inclusion of the most varied different political and social groups was a sign that efforts were being made to transform Tunisia. In the first weeks and months after the Ben Ali regime was toppled, even before elections were held to form the assembly that would draw up the constitution – the Assemblée Nationale Constituante (ANC) – the protagonists involved made an effort to be as broadly inclusive as possible.

Together, these political players resisted the temptation to hold quick elections for a new parliament or even a presidential election. First, they wanted to agree on the rules of the game for the political system within a constitutional assembly.

The decoupling of the process to come up with a constitution from the elections to decide political offices is one of the most important differences between the Tunisian transformation and those of neighbours Egypt and Libya. That being said, the aim of separating the drawing up of the constitution from the installation of a new political leadership, both chronologically and factually, was only partially successful, even for the model students in Tunis.

The parties treated the election to the ANC like an election for a new parliament, meaning that the founding of the constitution ultimately became politicised. And because the timetable had been calculated too tightly, the ANC, which was originally only supposed to last a year, had to be extended several times.

Over a period of three years, the ANC also took on an increasing number of traditional parliamentary tasks, such as the passing of laws and control of the government. After several crises, caused by the assassination of two prominent delegates from left-wing parties by Islamist extremists, the ANC agreed to establish a government of technocrats to prepare the elections. 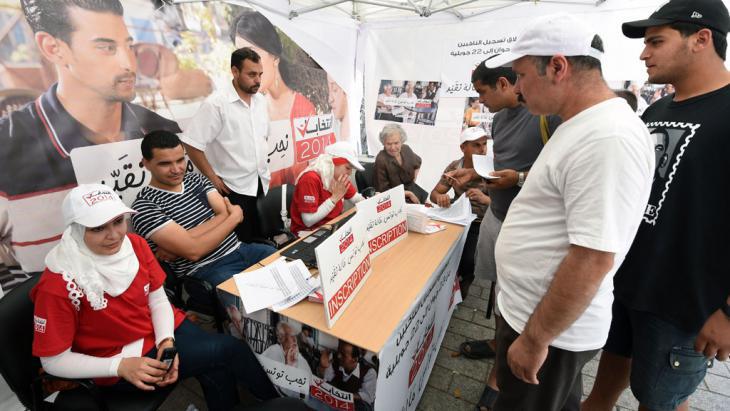 People registering to vote in Tunisia's parliamentary and presidential elections. The presidential election, which will take place on 23 November, will be the first free election of a Tunisian head of state since the overthrow of President Zine al-Abidine Ben Ali in 2011. Together with last week's parliamentary election, they are intended to mark the end of the country's transition to democracy

A plea for de-escalation

Following growing pressure from civil society, and with mediation by the unions within the framework of the national dialogue, the ANC succeeded in coming to an agreement on the new constitution. The striking thing about the reaction to the extremists' political violence was that all organisations from both political and civil society made a joint call for non-violence, de-escalating the tense political situation in the country.

The imminent dissolution of the constitution assembly in favour of a parliament elected in accordance with the new constitution, and the presidential elections that will follow in November, usher in the next phase of the transformative process in Tunisia.

Tunisia's democracy is a beacon of light in an Arab world made up of newly established autocracies (Egypt, Algeria, Bahrain, Jordan) and the countries of the region engaged in civil war (Libya, Yemen, Syria). This development – notwithstanding all necessary criticism of the transformative process – cannot be valued highly enough.

All the same, Tunisia's parliamentary election in October and presidential election in November present a kind of "stress test" for the process of transformation in Tunisia and the political elites involved. The semi-presidential institutional structures that have already been established still have to prove themselves. The political protagonists in particular will have to interpret their scope and to maintain the inclusive political culture achieved in the process of drawing up the constitution. 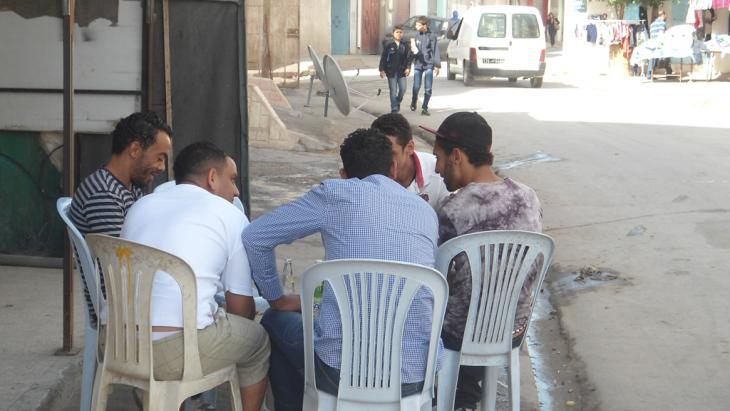 Still sidelined, almost four years after the Jasmine Revolution: a group of young unemployed men sit talking in Tunisia. "Efforts towards reform that will enable young people to enter the workforce are therefore urgently needed. Unfortunately, despite their important role during the 2011 protests, the younger generation still has no great socio-political influence," writes Ilyas Saliba

In spite of Tunisia's successes, several immanent problems have not yet been addressed. Socio-economic questions, which many see as the main trigger for the 2011 protests, were largely put on the back burner while the constitution was drawn up. The decline in tourism and the drop-off in international willingness to invest during the transformation process, in combination with decreasing volumes of EU trade, have led to a further increase in youth unemployment. According to official statistics, unemployment among the under-25s in Tunisia stands at 40 per cent. Young people lack prospects.

What makes youth unemployment a problem for the whole of society, however, is not the high percentage alone. A glance at the country's demographics is enough to reveal that 40 per cent youth unemployment in Tunisia represents a far higher proportion of the population as a whole than the 50 per cent unemployment among young people in Spain or Greece. And even higher levels of foreign investment or a growth in tourism alone will hardly be able to solve this structural problem. Efforts towards reform that will enable young people to enter the workforce are therefore urgently needed. Unfortunately, despite their important role during the 2011 protests, the younger generation still has no great socio-political influence.

In addition to this, the central political question of distribution between the centre and the periphery has still not been answered. In an institutional structure that continues to be organised along classical, centralised lines, we must wait and see whether the neglected regions in the interior will get a bigger piece of the pie in a new political landscape. It was no coincidence that the protests in December 2010 began in Tunisia's economically neglected interior, before making their way into the capital. 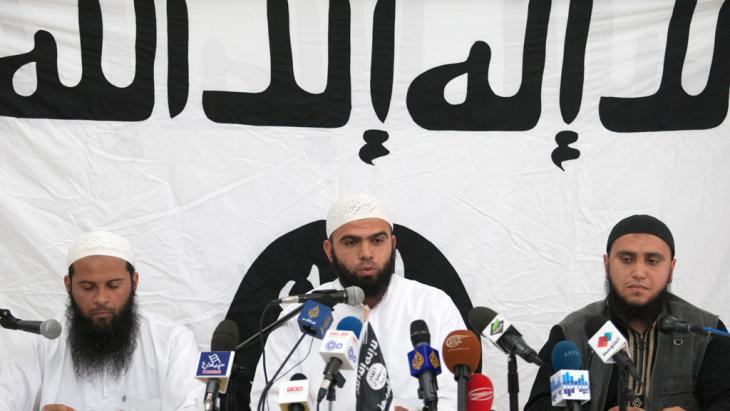 Supporters of Ansar al-Sharia in Tunisia: most Tunisian jihadists belong to the radical Islamist group Ansar al-Sharia, which is considered a terrorist group by Tunisia, the UK and the US. Many hold it responsible for the assassination of politicians Chokri Belaid and Mohamed Brahmi in 2013

The key role of the constitutional court

Another decisive issue is the central line of conflict laid out in the constitution, and not conclusively clarified, between the protection of religion from blasphemy and the principal of secularity – in particular the freedom of expression and the freedom of the press. In this respect, the newly established constitutional court will have a decisive role to play in the interpretation of the constitution's text.

Up until now, the efforts towards political transformation have been strongly concentrated on the national level. At local level, particularly in towns and municipalities in the more rural regions, the town halls have been partly filled by old regime cadres or self-proclaimed revolutionary committees since the overthrow of Ben Ali, which is now almost four years ago.

As a rule, these committees have not been legitimated by elections. A systematic transfer of the transformative process to local level and properly anchoring it in the rural regions is one of the many challenges facing the new government in Tunis.

The security apparatus, which spread fear and terror under Ben Ali's regime, particularly through his secret service, has so far escaped any comprehensive changes. A reform of the security sector, especially the police and the secret-service organisations, is absolutely essential in order to create trust among the state's citizens and its executive.

The challenges of jihadism

This seems all the more necessary since Tunisia has a number of security threats to combat. According to official statistics from the Tunisian Ministry of the Interior, at least 2,600 Tunisian nationals have now made their way to Syria or Iraq, to fight in the "holy war"; 80 per cent of them are thought to have joined IS.

Even if there has been no recorded influx of these people back into the country, the return of radicalised jihadis with military experience does not bode well for Tunisian national security. In addition to this, Tunisia has been put under great strain by the streams of refugees coming from Libya, Mali and Syria. And weapons flowing in from Libya and Mali mean that in the border regions, the state's monopoly on the legitimate use of force is coming under increasing pressure.

The parliamentary and presidential elections at the end of October and the end of November are a new performance test for Tunisia. Even now, almost four years after the fall of the Ben Ali regime, we cannot pass a final judgment on the transformative process. Tunisia is still in the middle of a transition that still has the potential to fail.

Nevertheless, we can give Tunisia a good report on the transformation it has accomplished thus far. The smallest country in North Africa was not only the origin of the protest movements of the Arab Spring, it is also setting a good example for democratic change in the region.

Ilyas Saliba is an academic in the department of Democracy and Democratisation at the WZB Berlin Social Science Center and an associate fellow of the EU-Middle East Forum at the German Council on Foreign Relations (DGAP). His primary research interest is the stability of autocratic regimes during the Arab uprisings of 2011.

Sultana Khaya, 41, has been peacefully resisting the Moroccan occupation of Western Sahara for many years. Because of her campaign to assert the self-determination of the Sahrawi ... END_OF_DOCUMENT_TOKEN_TO_BE_REPLACED

Back in 1995, when The Times asserted Islam was to blame for the poor levels of education among women in the Muslim world, Mohammad Akram Nadwi began scouring ancient Arabic ... END_OF_DOCUMENT_TOKEN_TO_BE_REPLACED

Since Spain abandoned its traditional neutrality towards the conflict in Western Sahara, Morocco has announced a "new phase" in relations between the two countries. But what is ... END_OF_DOCUMENT_TOKEN_TO_BE_REPLACED

Tunisia's president has been carrying out a coup by degrees, demolishing the country's hard-fought democratic gains bit by bit. With an economy in turmoil and a splintered ... END_OF_DOCUMENT_TOKEN_TO_BE_REPLACED

The German government is planning to legalise cannabis before the end of this legislative period. So what does Islam have to say about its consumption? Will changing the law alter ... END_OF_DOCUMENT_TOKEN_TO_BE_REPLACED
Author:
Ilyas Saliba
Date:
Mail:
Send via mail

END_OF_DOCUMENT_TOKEN_TO_BE_REPLACED
Social media
and networks
Subscribe to our
newsletter