Skip to main content
Democratisation in Egypt and Indonesia

"Do Not Repeat Our Mistakes!"

Thirteen years after the political reforms, Indonesia is viewed as the most stable democracy in its region. Is there something Egypt can learn from the Indonesian example? A critical analysis by Saskia Louise Schäfer 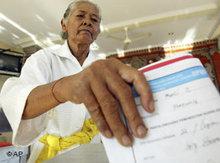 In Indonesia, elections are judged to be free and fair, the transition to democracy is hailed as a success. But the country is plagued by virulent corruption and violent Islamism

​​Thirteen years after the "Reformasi" of 1998, Indonesia is viewed as the most stable democracy in its region. In February, Indonesian President Susilo Bambang Yudhoyono offered an exchange of information with Hosni Mubarak on Indonesia's experiences with democratisation. The BBC organised a discussion via satellite telephone where Indonesian journalists passed on advice to their Egyptian colleagues.

Of course, there is no ready-made blueprint for political change and Egypt will find its own way. The current situation in Egypt, however, in spite of some important differences, can be more readily compared with what was going on in Indonesia thirteen years ago than with post-Islamic Revolution Iran, for example. The dramatic pictures that have come out of Egypt recently have brought much talk of a 'revolution' in the country, but what we are really seeing is a transformation and one in which the old political forces, especially the military, are playing a major role.

Indonesia's transition to democracy is hailed as a success. Elections are judged to be free and fair and they have given the current president time to move towards stability during a second term in office. The country's freedom of the press is the envy of many countries even outside the region. The fear that political chaos or Islamism would replace the Suharto dictatorship has proven unfounded.

Although the long suppressed conservative Islamist parties are making use of the new freedom to demand a stronger role for Islam, they receive only a small fraction of the vote at elections and tend to campaign on anti-corruption measures. In the meantime, the economy is booming.

The visits by Hillary Clinton and Barack Obama show how good relations with the US are. Clinton commended the country's efforts in the fight against terrorism, while Obama praised Indonesia's 'unity in diversity', which he called an example to the world. Is Indonesia, then, a democratic success story, and an example to the Arab world? 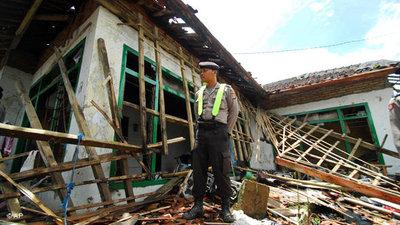 Outbreak of violence: As Djakarta's 'Interfaith Harmony Week' was getting underway at the beginning of February, a militant Islamist lynch mob was setting about and killing several members of the Ahmadiyah minority. Pictured: destroyed house of an Ahmadiyah family in Pandeglang

Human rights activists would dispute this and point to the heaps of files on unresolved human rights violations, on structural poverty, on torture in the Papua province, or on harsh laws derived from sharia.

Even as Djakarta's 'Interfaith Harmony Week' was getting underway at the beginning of February, a lynch mob was setting about and killing several members of the Ahmadiyah minority. Shortly thereafter videos began to appear showing just how out of their depth and inactive the police at the scene had been. Two days later in central Java two churches were set alight by protestors outraged by the lightness of the sentence given to a Christian who had allegedly insulted Islam. 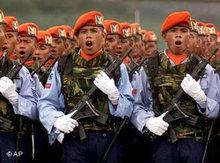 In order to reduce military interference in Indonesia's domestic policy, the entire army structure was decentralised and soldiers were given no voting rights

​​So what is it that Egypt can learn from such a contradictory and rather ambivalent model? In both cases the military took on a key role following the collapse of the dictator and faced the task not only of ensuring that the promised stable handover of power to the people would take place, but also of reforming itself at the same time. The Egyptian military has promised to hand over power to the people. This will be a very difficult chalenge, one that will require time – time that we must hope the people have and the army puts to good use.

In Indonesia military interference in domestic policy has been drastically reduced. The entire army structure was decentralised and soldiers were given no voting rights.

Indonesia remains plagued by crippling corruption and a venality within the judicial system that is undermining democratic structures within the country. The large number of crimes that go unpunished has an unsettling effect on the majority of the population, and with each new and absurd acquittal, confidence in the judicial system and in the government is further diminished.

It would send out a positive signal in Egypt if the money that Mubarak had distributed among his cronies and cohorts were to be returned and crimes reviewed and reassessed. Indonesians are still bitter about the way the Suharto family has managed to hold on to their accumulted wealth.

Bribery, however, is not the only influence at work on the judgements of the Indonesian courts. Some of the more vocal Islamist organisations are not above beating up witnesses in front of the courts, or even threatening to burn down the building to achieve the desired outcome. Egypt needs to find a way to allow Islamist groups, too, to participate in the democratic process, without being blackmailed. 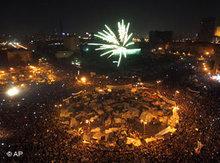 A magic dwells in each beginning: The task that Egypt now faces is to convert the street protest into a new system of political participation, Schäfer says

​​The wish for political participation is, after all, one that needs to consider participants, not merely structures. New politicians, untainted by the old regime and able to win the trust of the people, are urgently needed. The shortage of this crucial resource proved a hindrance to Indonesia's transition. This is also a danger for Egypt, because the Islamist parties are still free of any taint of corruption and they are the ones with the fresh candidates, the can now put up new faces for their election posters. This was what happened in Indonesia.

After the fall of Suharto, the demonstrators in Indonesia returned to their jobs and left the reorganisation of the political system to the politicians of the old system. They, however, unable to disperse the stench of nepotism, were forced to form coalitions with small Islamist parties after the elections, parties that were offering a clean slate and promising to combat corruption.

The task that Egypt now faces is to convert the street protest into a new system of political participation. Bambang Harymurti, chief editor of the weekly magazine 'Tempo', banned under the Suharto regime, says his Egyptian colleagues would be well advised to leave journalism immediately and take up politics. His advice is simple: "Do not repeat our mistakes!"

Saskia Louise Schäfer is a doctoral student at the Free University of Berlin, where she specialises in South-East Asian Studies and Political Science.

Islam in Indonesia
Democratisation from Below
In Indonesia, Islamic NGOs have become the backbone of the country's tolerant civil society. While Islamic women's organisations are demonstrating how the Sharia can be used effectively to combat misogynist policies, Islamist parties are losing ground in elections. Alfred Stepan and Jeremy Menchik report

Religious Minorities in Indonesia
Putting an End to Intolerance
Jurnal Nasional journalist Luther Kembaren examines a host of factors that have led to sectarian and religious violence in Indonesia, and calls for all elements of Indonesian society – including the government and media – to help empower religious minorities

END_OF_DOCUMENT_TOKEN_TO_BE_REPLACED
Social media
and networks
Subscribe to our
newsletter