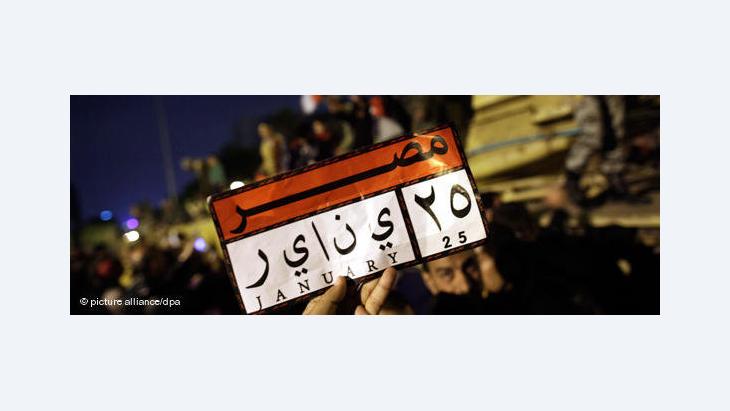 Demonstrations against the Military Council in Egypt

"The military council is not cooperating with the revolution; it is trying to control it." This is the kind of thing that demonstrators are saying in Cairo. Once again, they are flocking to Tahrir Square in their thousands; only this time, they are protesting against the military council and the transition government. Amira El Ahl sends us this report

A small, yet unambiguous piece of graffiti depicting Field Marshall Hussein Tantawi behind bars has been daubed on the facade of the Mogamma – an imposing, Kafkaesque-like building that is a symbol of mismanagement and nepotism if ever there was one. Hundreds of people are staging a sit-in in front of the building.

"I don't notice any change. We toppled Mubarak and got Tantawi," reads one placard being held up by a middle-aged man. Last Friday, hundreds of thousands of people came to Tahrir Square to vent their anger about this situation. It was the largest demonstration to take place in Cairo since Mubarak was overthrown. In other cities across the country too, thousands of people took to the streets in protest.

"We have come here today to exert the same pressure as we did during the revolution," says Mustafa Dessouki. "We came to demand the overthrow of the regime, because the entire government is corrupt, not just one single person."

Mustafa Dessouki is neither an activist nor one of Egypt's "Young Turks". He has never been politically active; in fact, the 35-year-old recently got married and is working as a manager in a private company. He says that he himself is doing well, but that the overall situation in Egypt is no longer tenable. "Absolutely nothing has changed since Mubarak was overthrown," he says while running across a crowded Tahrir Square, where it is 40 °C in the shade.

The only way to force the military council under Tantawi to make real changes, he says, is to exert constant pressure. "We have to stay and show that they cannot play games with us." 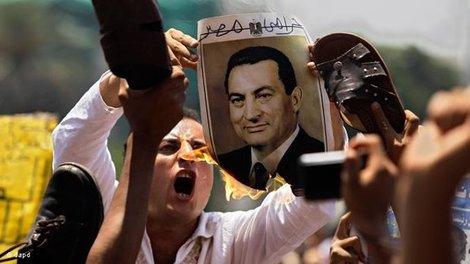 Unhappy with the changes that have been made since Mubarak was forced out of office, tens of thousands of people returned to Tahrir Square last week; they want more former civil servants to be brought to justice and criminal proceedings against Mubarak and his former posse to be accelerated

​​The frustration and disillusionment felt by Egyptians about the political course adopted by the military council has been steadily increasing in recent weeks. On June 28, there were brutal clashes between police and demonstrators in which 1,000 people were injured. The police used tear gas and shot rubber bullets into the crowd. The attacks were seen as evidence of the fact that Mubarak's notorious police machine is still up and running.

Dwindling support for the army leadership

The court case against the former Minister of the Interior, Habib Al-Adly, his helpers and police officers, who are up on charges of murdering demonstrators, keep being postponed. Seven police officers from Suez, who had been sent to prison for murder, have been released. To cap it all, the former Minister for Information, Finance, and Building has been acquitted of corruption.

At the same time, activists and human rights activists are being fast-tracked through military courts. It is said that in the past five months, sentences – some of which run into several years – have been handed down on 5,000 civilians by military courts. Yet neither Mubarak nor his sons have seen the inside of a courtroom. 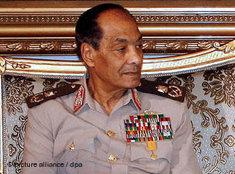 "We toppled Mubarak and got Tantawi!" Many demonstrators consider the chairman of the military council to be a symbolic figure of the old regime

​​"The military leaders are just pretending that they want reforms. In reality, they don't want change, and we can't really insist that they put their colleagues in the dock and sentence them," says Dessouki. Many Egyptians share this opinion. The initial faith in the military council seems to be dwindling by the day.

The military is the only pillar of the old regime to remain standing and to be completely unaffected by events. After all, during the revolution, the military leadership sided with the demonstrators and has since repeatedly expressed its commitment to the introduction of civil democracy in Egypt. However, its actions since then have spoken quite a different language.

The omnipotence of the army

It is not surprising that the military leadership is not interested in changing the status quo. Since the military coup of 1952, every one of Egypt's presidents has been a military man. Politically and economically, the military is the most powerful institution in the country.

Since the signing of the peace treaty with Israel in 1979, the military has received about US$36 billion in military aid, making it the second-largest recipient of American military aid after Israel. Every year, it receives US$1.3 billion. Moreover, the military rules over an extensive economic empire of companies and factories. Its exact budget is unknown.

Last month, Hussein Tantawi gave instructions for military law to be amended. From now on, accusations of corruption levelled at active or retired members of the military should be investigated by the military itself and by no other.

"The military council is not cooperating with the revolution," says Mustafa Dessouki," it is trying to control it. They are reacting to our demands but they are not actually taking any positive action." Dessouki is convinced that it was a considered move on the part of the military to sacrifice Mubarak and, in so doing, to start dividing the population into Islamists, Copts, Conservatives, and Liberals. "To this end, the military council is employing exactly the same tactics as Mubarak did." 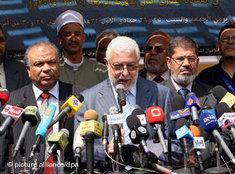 New political player on the Nile: Egypt's Muslim Brotherhood founded a new party, the Freedom and Justice Party, at the end of April 2011

​​Unlike most liberal parties, the Muslim Brotherhood and other Islamist groups support the military leadership's schedule for the holding of elections. The liberal parties are afraid that the well-organised Muslim Brotherhood will benefit the most from early parliamentary elections and thus armed with a parliamentary majority, will shape the future constitution of the country as it sees fit.

Mustafa Dessouki doesn't believe that the secular and Islamist camps are at loggerheads either. "The regime is exaggerating the power of the Islamists to its own ends." For decades it has been singing the same old tune: "It's your choice: it's either us or the fundamentalists." Dessouki says that despite the fact that this situation has never actually come about, the regime is using this tactic to reinforce its position of power.

For the young people in the Muslim Brotherhood in particular, Islam and a civil state are not incompatible. "In Islam, there is no such thing as the concept of the religious state," says Sondos Asem.

Asem is an active member of the Muslim Brotherhood and has been tying to explain to supporters in public debates why she, as an Islamist, supports a civil state. "Islam should be the state religion and the main source of the legislative because its principles are freedom, equality, human dignity, and justice." She says that she is decidedly opposed to clerics who abuse religion to achieve political power.

Since the overthrow of Mubarak, the military council has amended party law, making it easier to set up political parties. Islamists also benefit from this reform. For example, the Muslim Brotherhood recently set up the Freedom and Justice Party. Other Islamist groups have also taken similar action.

However, as political involvement increases, the internal conflict among Islamists is also on the rise. The split within the Muslim Brotherhood – especially between the old and young guards – is becoming more and more obvious. This dispute recently peaked when five young members were excluded from the organisation for wanting to set up their own party despite being forbidden to do so by the brotherhood's most senior committee.

Some long-serving members of the brotherhood have also fallen out of favour with the brotherhood's leaders, which responded by announcing that the group will not take part in the upcoming presidential elections. Nevertheless, a high-ranking member of the brotherhood – Abdel Moneim Aboul Fotouh, who is considered liberal – has announced that he wants to stand for election as an independent candidate. 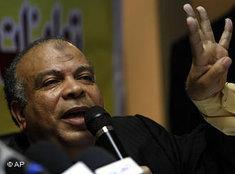 "The new Freedom and Justice Party is not a religious, but a civil party based on Islamic law," explains Mohammed Saad El-Katatni of the Muslim Brotherhood

​​Even the Salafists – who adhere to a very conservative brand of Islam and constitute a minority in Egypt – have founded their own party. There is no unity between the Islamist parties. One reason for this is that their ideologies vary hugely; from liberal to extremely conservative, there is a party for all colours in the Islamist spectrum.

But despite their differences, members of the Muslim Brotherhood, the Salafists and the Liberals all gathered on Tahrir Square last Friday. For one day, they united behind the slogan: "The Revolution comes first".

"There are left and right wings in every ideology, but this revolution is not just about religion," says Mustafa Dessouki, standing in front of the steel framework of the Muslim Brotherhood's now empty stage as night falls. Unlike the liberal activists, the Islamists do not want to openly criticise and challenge the military leadership. They insist that change is possible with the military.

The several thousand activists who have come together for an indefinite sit-in on Tahrir Square do not share this belief. They believe in the power of civil disobedience. They have brought traffic to a standstill, blocked the entrance to the Mogamma, and intend to remain there until their voices are heard. So far, however, the military and the police have turned a deaf ear.

They’ve already got the Louvre; they’ll soon have a Guggenheim Museum as well – and now the Emirates have added literature to their quest for cultural supremacy in the Arab world ... END_OF_DOCUMENT_TOKEN_TO_BE_REPLACED

Years in the making, Sisi's elite New Administrative Capital will isolate most Egyptians from their centres of government in an effort to fortify the regime against any social ... END_OF_DOCUMENT_TOKEN_TO_BE_REPLACED

Professor Timothy Brennan's "Places of Mind: A Life of Edward Said" is a detailed biography of one of the most important intellectuals of the twentieth century, taking us on a ... END_OF_DOCUMENT_TOKEN_TO_BE_REPLACED

China has long portrayed itself as a strong supporter of the Palestinian cause. It has also claimed that in sharp contrast to the stance of the USA, its position is based on ... END_OF_DOCUMENT_TOKEN_TO_BE_REPLACED

Recep Tayyip Erdogan, disappointed by the European Union’s reluctance to integrate Turkey into its ranks, has re-directed his country’s diplomacy toward the Maghreb and Africa to ... END_OF_DOCUMENT_TOKEN_TO_BE_REPLACED

END_OF_DOCUMENT_TOKEN_TO_BE_REPLACED
Social media
and networks
Subscribe to our
newsletter