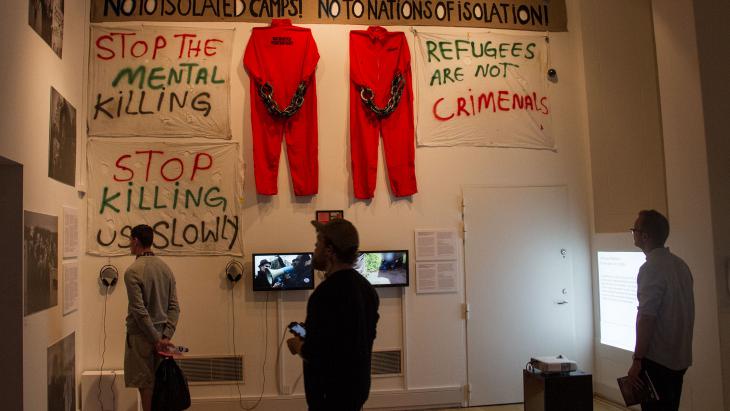 A pregnant Peruvian, Daniela Ortiz, enters the gathering room; she enters the room tethered to another human life. A blood transmission tube from a vein in her right arm connects to a vein in the left arm of the man accompanying her, a Spaniard, Xose Quiroga.

Ortiz presented her performance at the opening of the exhibition Deportation Regime, in the capital city of Denmark, a country infamous for its anti-immigration laws. The exhibition was hosted by CAMP, an art gallery in Copenhagen that describes itself as a exhibition venue ″for art discussing questions of displacement, migration, immigration and asylum.″

For Ortiz, who has performed and created artwork about immigration and deportation for five years, this exhibition was an opportunity to raise awareness of the antiquated, 19th century rule, ″right of blood″, which is still in effect in most countries across the world.

″Nationality is not the only thing that our children inherit from us, our status as an immigrant also passes on to them,″ Ortiz points out. ″If parents are considered illegal immigrants in Europe, then their children will also become illegal citizens, regardless of their birthplace.″

In Ortiz′s opinion, concepts such as freedom of movement, globalisation and the labour market are notions of modern colonialism. 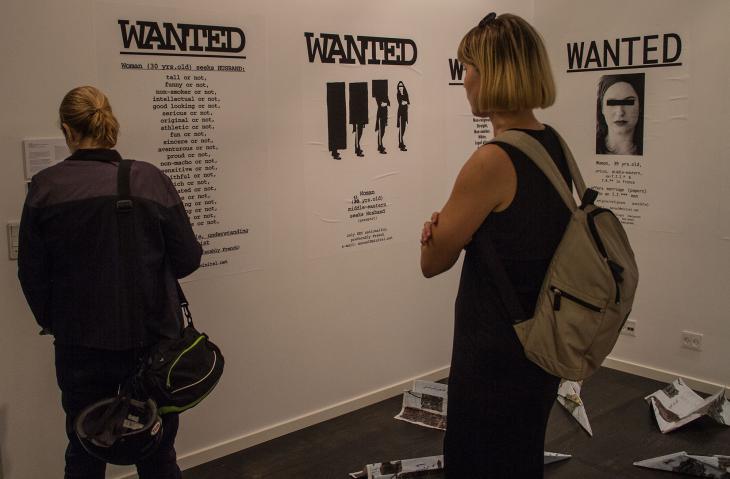 Marianne Torp, chief curator at the National Gallery of Denmark believes that art centres can positively affect the ongoing discussion about immigrants coming to Europe: ″We have been very interested in changing the general view point of Danish people about the situation of immigrants who arrive in Denmark,″ admits Torp. ″In a time of massive immigration, we need to think about what it means to be a nation and how we can expand and develop the notion of nationality"

″These are laws established by the European states for their own benefit,″ she explains. ″Europeans are the only ones benefiting from these laws and agreements. They can move freely, enjoy borderless trade and have access to greater work opportunities.″

″For the people from the old colonies, like us, the only opportunity presented to us is to be a cheap labour force, or to take the manual work that most Europeans don′t want to take.″

The Peruvian artist first arrived in Europe in 2007 and lives in Spain with a temporary residency permit. To her, even the integration process and the authorities′ framework for that process, is deeply rooted in colonial rules.

″They look at us as if we don′t know how to live and behave,″ she observes. ″In order to become their nationality, they first check to see if we know how to behave. If we pass the test, then they let us stay. This is the same mind-set that allows Western countries to attack Iraq and Afghanistan with the aim of bringing them democracy.″

In addition to Ortiz, artists from Iran, Cambodia and the United States display their artwork, which is based on the themes of immigration and deportation, in CAMP′s current exhibition. Through her project, WANTED (Urgent), Ghazal, an Iranian artist living in France, presents a series of black and white posters that plead for ″a non-racist husband with an EU passport″ in the hope of escaping deportation.

Frederikke Hansen, one of the two directors at CAMP, explains that the opening of this 45 square metre gallery was the result of a 10-year investigation into Nordic colonialism and its impact on other nations. ″Through art works we can explain to people what a border is and what a camp or detention centre means,″ she says.

CAMP began holding immigration-related exhibitions in April 2015 and has become the only art centre with such an undertaking in Scandinavia. ″Artistic reflections on the politics of refugee and migrant detention″, ″journeys of historical uncertainty″ and ″the dividing line″, were CAMP′s previous exhibitions, which were also shown in the National Gallery of Denmark.

At the entrance of the gallery, an installation by Dady de Maximo, a survivor of the 1994 genocide in Rwanda, was displayed. His artwork depicts a set of fashion mannequins whose clothing is comprised of refugees′ life jackets and UNHCR plastic sheets. Crowns of barbwire are placed around the wrist of the mannequins, reminiscent of the crown of thorns placed on the head of Jesus to mock his claims.

Marianne Torp, a chief curator at the National Gallery of Denmark believes that art centres can positively affect the ongoing discussion about immigrants coming to Europe.

″We have been very interested in changing the general view point of Danish people about the situation of immigrants who arrive in Denmark,″ admits Torp. ″In a time of massive immigration, we need to think about what it means to be a nation and how we can expand and develop the notion of nationality.″

Art as an engine for change

Most of the artists whose art works have been presented in CAMP′s exhibitions have had first-hand experience as a refugee or immigrant. Their work depicts stories of displacement and hopelessness through photographs, sculptures, video art and installations. 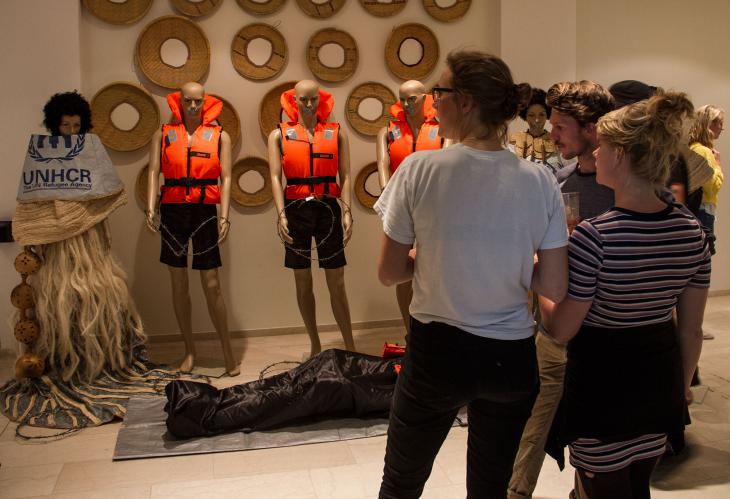 Displayed at the entrance of the gallery is an installation by Dady de Maximo, a survivor of the 1994 genocide in Rwanda. His artwork depicts a set of fashion mannequins whose clothing is comprised of refugees′ life jackets and UNHCR plastic sheets. Circlets of barbwire are looped around the wrists of the mannequins, somewhat reminiscent of crowns of thorns

″These artists have lived in refugee camps or have been kept in detention centres,″ stresses Tone Olaf Nielsen, the other director at CAMP. ″These are the experts who can provide testimonies to us and explain to the privileged classes that this situation must be changed.″

To explain the art centre′s main goal, Nielsen says that artists at CAMP have been attempting to address the question: ″Why can some of us move freely around the world without any visas, while others are brought into an asylum centre, a detention centre, or even a prison when they cross a border? ″

″We have to find a way to deal with the people who have been forced to flee their hometowns because their houses were bombed or they were threatened with death because of their sexuality,″ adds Nielsen. ″If I have to leave [my country] at some point, I hope there will be somebody who welcomes me.″

In his book "Ground Zero: 9/11 und die Geburt der Gegenwart" (Ground Zero: 9/11 and the Birth of the Present) Islamic scholar Stefan Weidner analyses the consequences of the ... END_OF_DOCUMENT_TOKEN_TO_BE_REPLACED

To Afghans, the name "Panjshir" evokes associations with the Tajik resistance against the Soviets during the 1980s. But the special charm of the province lies in its landscape. ... END_OF_DOCUMENT_TOKEN_TO_BE_REPLACED

The USA and NATO plan to withdraw from Afghanistan by September. The operation is risky, the outcome uncertain. Many Afghans fear civil war. The quake on the Hindu Kush will also ... END_OF_DOCUMENT_TOKEN_TO_BE_REPLACED

Even in times of war and pandemic, refugees are still being deported to Afghanistan. Several deportation flights have taken place in recent weeks alone. Since those affected often ... END_OF_DOCUMENT_TOKEN_TO_BE_REPLACED

The Prophet Muhammad never executed anyone for apostasy, nor encouraged his followers to do so. Nor is criminalising sacrilege based on Islam’s main sacred text, the Koran. In ... END_OF_DOCUMENT_TOKEN_TO_BE_REPLACED

END_OF_DOCUMENT_TOKEN_TO_BE_REPLACED
Social media
and networks
Subscribe to our
newsletter