Despite French and British pleas, few signs of U.S.-Iran detente

Britain and France all but begged Iran to jump into the waters of a negotiation with the United States this week.

Neither antagonist, however, showed much desire to discuss the many issues dividing them, from Iran's reawakening nuclear programme to the U.S. sanctions squeezing the Iranian economy.

The absence of dialogue - let alone a presidential meeting - shows neither is yet willing to abandon core elements of policy: the U.S. belief that pressure will bring Iran to its knees and Iran's refusal to capitulate to U.S. duress.

As a result, European and Gulf officials expect Washington to keep tightening its vise on Iran's economy and foresee more attacks in the Gulf - like the September 14 strikes on Saudi oil facilities - that the West blames on Tehran despite its denials.

French President Emmanuel Macron and British Prime Minister Boris Johnson teamed up on Tuesday to urge Iranian President Hassan Rouhani to meet U.S. President Donald Trump while they were all in New York this week for the U.N. General Assembly.

The recent deal reached by Iran and the West has raised hopes of a better future for Iranians. Until then, Iranians will have to continue coping with the impact of Western sanctions on their economy 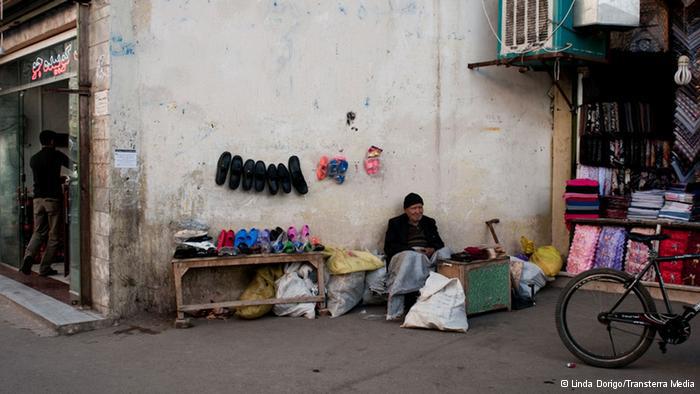 A street vendor at the bazaar of Mashhad presents his goods to passers-by. Many of those peddling their wares struggle to make ends meet. 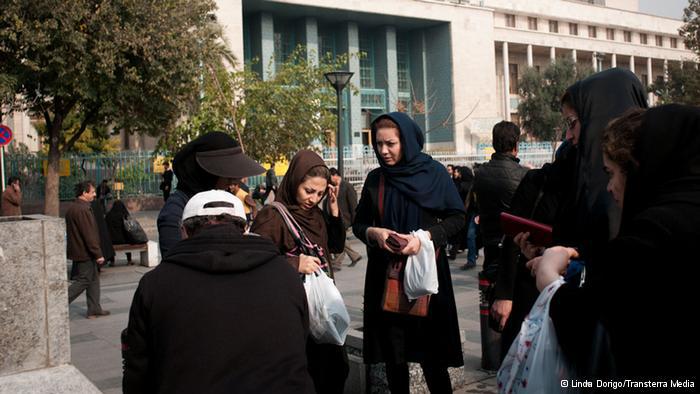 Bozorg bazaar, the main bazaar in south Tehran. Banking operations with foreign countries are impossible due to the sanctions. Iranians have to use Dubai-run banks or Turkish banks for their money transactions. 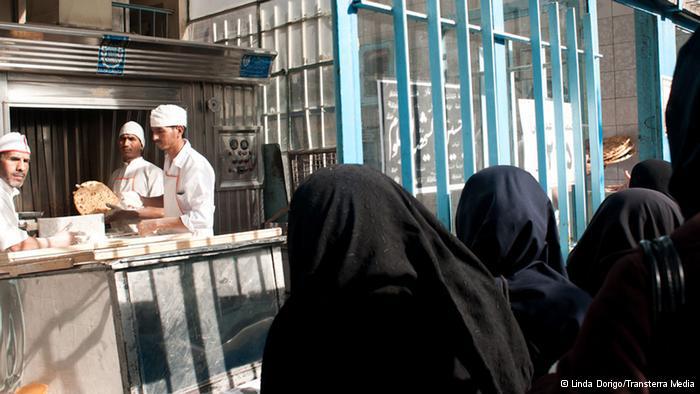 Women queuing to buy bread at a bakery in Mashhad. Many Iranians have changed their shopping habits, preferring to buy at the cheaper supermarkets rather than going to more expensive shops. 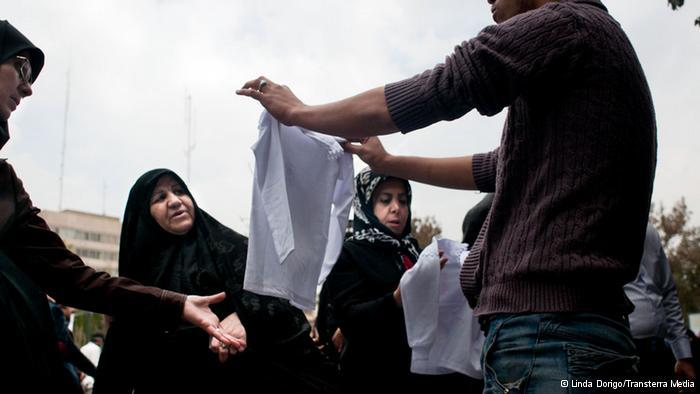 Because many commodities are not available on the official market due to sanctions, the black market is thriving, providing Iranians with items that are in demand. 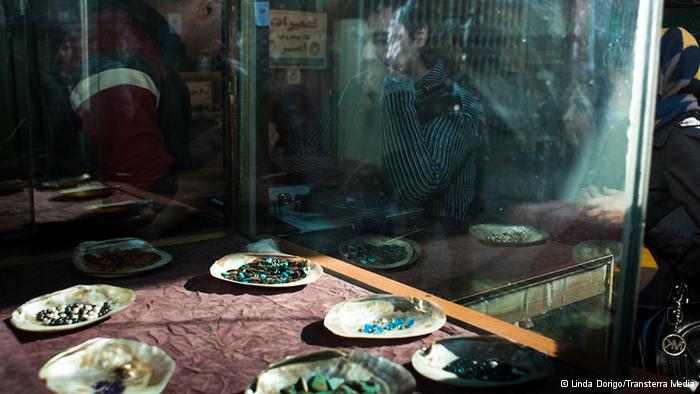 An exchange shop for gemstones in Tehran. Many Iranians are investing in gemstones because the devalutation of the Rial, the Iranian currency, has left it practically worthless. 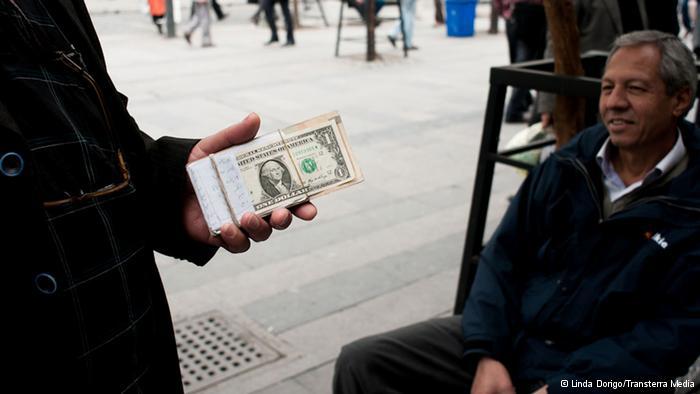 Because of the sanctions, many people resort to exchanging dollars and euros illegally on the streets of the capital, Tehran. 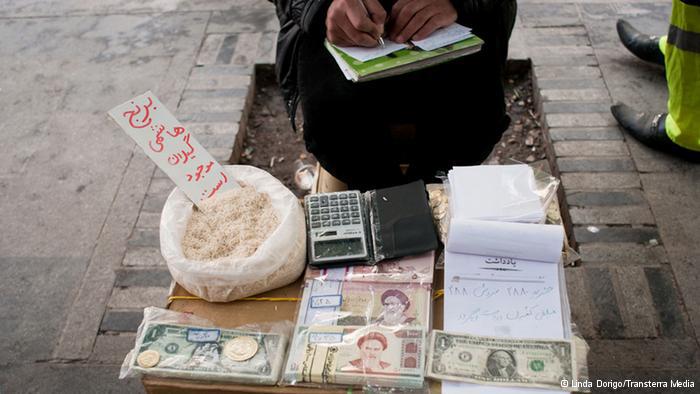 One of the most urgent problems facing the Iranian economy is the devaluation of the Rial. Over the past two years, it has lost nearly two-thirds of its value. Conservative estimates put inflation at 40 per cent. 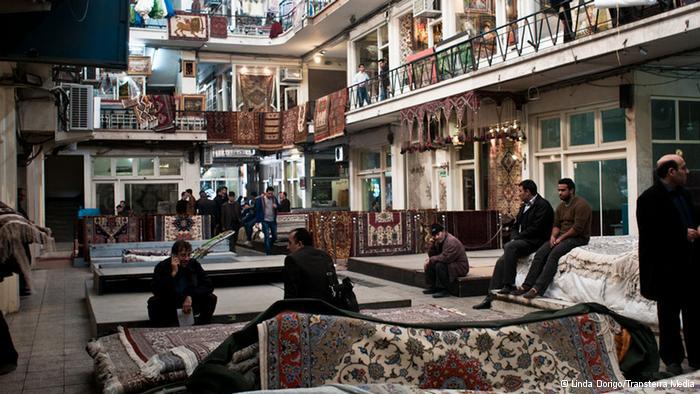 Bozorg bazaar, the main bazaar in south Tehran. The carpet industry is a very important pillar of the Iranian economy. However, export restrictions relating to sanctions are hitting profits hard.

"If he leaves the country without meeting with President Trump, this is a lost opportunity," Macron told Johnson in a rare three-way meeting with Rouhani caught on camera.

"You need to be on the side of the swimming pool and jump at the same time," Johnson said, miming a jumping gesture to the Iranian president, who was wearing his habitual floor-length robe.

Iranian officials sniffed at the idea of Rouhani-Trump talks in New York, with one on Wednesday putting the odds at "zero". "The era of using pressure to bring a country to its knees is over," said a second Iranian official, who spoke on condition of anonymity.

They also reiterated, in public and private, their demands that the United States return to the 2015 Iran nuclear deal that Trump abandoned last year and that it ease the sanctions he tightened in May to try to eliminate Iran's oil exports.

"They walked out of the deal, imposed sanctions, tried to cut our oil exports, threatened other countries to stop helping us," said the second Iranian official. "Then they talk about talks? No chance."

In the view of Western officials, Iran has struck back against U.S. sanctions through a series of attacks in the Gulf that have roiled oil markets.

Critics argue that Trump's failure to respond militarily has convinced Tehran it can continue to strike with impunity.

"The Iranians are still willing to take the risk involved in attacking oil facilities in Saudi Arabia since they understand that they will not exact a heavy price," said a Western intelligence source.

The one area where U.S. and Iranian officials signalled a willingness to talk, though it was unclear whether they actually did, was on the possibility of releasing prisoners from the other country.

The United States this week deported an Iranian woman who pleaded guilty to exporting restricted U.S. technology to Iran, but U.S. Secretary of State Mike Pompeo declined to discuss whether a U.S.-Iranian prisoner swap was in the offing.

Trump, who basks in high-profile summits, had said he was willing to meet Rouhani in New York without preconditions, but the Saudi attacks upended the efforts by France's Macron to bring the U.S. and Iranian leaders together.

"The September 14 attacks were of such magnitude that it was a turning point," said a French diplomatic source.

The source described Iran's early September decision to take another step away from the nuclear deal by starting to develop centrifuges to speed up its uranium enrichment as "a third knife attack" on the 2015 agreement. "There was a little wiggle room before. That's even smaller now, but it still exists," he added.

Iran committed another breach of the fraying nuclear deal by enriching uranium with advanced centrifuges, a report by the U.N. nuclear watchdog policing the deal said on Thursday.

A third Iranian official said a U.S.-Iranian negotiation was still possible, saying: "It is always darkest before the dawn."

Analysts, however, doubted one was likely any time soon.

"The Trump administration keeps insisting that Iran is under pressure - which is certainly true. But Trump is under pressure as well, as Iran continues to attack U.S. and global interests and expands its nuclear programme in potentially dangerous ways," said Phil Gordon, who served at the State Department and U.S. National Security Council under then-President Barack Obama.

"Iran has signalled in recent weeks that it is not prepared to simply cave to U.S. maximalist demands as Trump seems to have hoped," added Gordon, who is now at the Council on Foreign Relations think tank. "So now Trump has to decide if he's going to give in to some of Iran's demands - a major climbdown - or to accept the costs and risks of the unstable status quo."    (Reuters)

END_OF_DOCUMENT_TOKEN_TO_BE_REPLACED
Social media
and networks
Subscribe to our
newsletter