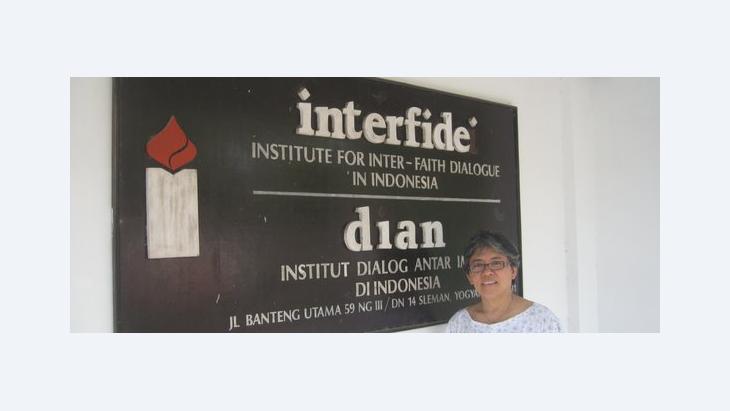 Dialogue between Religions in Indonesia

On the Interdenominational Construction Site of Humanity

﻿For the past 20 years, the Indonesian NGO DIAN/Interfidei has been engaged in interdenominational dialogue. The organization has also tried to include atheists, Confucians, and even fundamentalists in its activities – with various degrees of success. Anett Keller reports from Yogyakarta

Dhakidae was not the only one with such questions. In October 1991, the Catholic journalist Daniel Dhakidae, together with his Muslim colleague Zulkifly Lubis, the Protestant theologians Eka Darmaputra and Thomas Sumartana, and the Muslim religious scholar Djohan Effendi founded DIAN/Interfidei, the first Indonesian NGO that made pluralism the focus of its programme.

At the time, Indonesia was firmly in the grip of Suharto's military regime. The constitution recognized only five religions – Islam, Protestantism, Catholicism, Hinduism, and Buddhism. The official position was one of "tolerance between religions," but it was forbidden for the media to report on any conflicts between the adherents of different faiths. 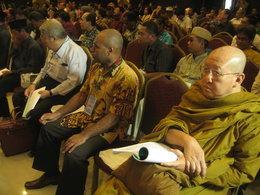 "Building a common house in which there is room for everyone": the 20th anniversary celebrations of DIAN/Interfidei in Yogyakarta

​​"DIAN/Interfidei deserves the credit for recognizing early on that enormous tensions had been seething under the surface," says Stanley Adi Prasetyo, member of Komnas HAM, the Indonesian human rights commission.

The philosophy of DIAN/Interfidei is that people of different faiths should exchange their real experiences rather than focussing on their respective religious dogmas. All interested individuals should be included, regardless of their faith or world views. The goal is to create an interdenominational community.

"The concept of 'tolerance between religions' was one imposed from above and that solely catered to institutions and their leaders," explains Daniel Dhakidae. "An interdenominational community, in contrast, develops from the grass roots, from community initiatives, and is not driven by special interests."

Elga Joan Sarapung, the executive director of the DIAN/Interfidei Institute, long ago gave up her work within the confines of an organization. In 1993, she resigned from her position as deputy chair of the Gorontalo Synod in north-eastern Sulawesi in order to devote her energies to NGO work in Yogyakarta. "I am not the type to be a pastor. All the rituals aren't for me." The 50-year-old with closely cropped grey hair lets loose a hearty laugh. "Too much routine makes me very impatient."

Yogyakarta lies at the heart of the island of Java. It is a cultural melting pot and home to the country's leading universities. According to Elga, the city is the ideal location for her NGO. "Yogyakarta is cosmopolitan and pluralistic. It is ideally suited for us to reach the young generation."

Atheism as a political foe

Interfidei intentionally includes Atheists in its dialogue as well, although hardly anyone in Indonesia will admit to not believing in God. This can be traced back to the fierce indoctrination pursued under the military dictatorship of Suharto, who seized power after an attempted putsch and strived to wipe out the Communist Party on account of its supposed involvement in the coup d'état. From then on, the official doctrine was "Atheism = Communism = chaos." 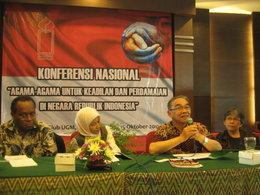 Creating an interdenominational community: The philosophy of DIAN/Interfidei is that people of different faiths should exchange their real experiences rather than focussing on their respective religious dogmas

​​Elga is not concerned with an individual's formal denomination, but rather with their concrete behaviour. "When someone does something good, then that person is following an inspiration. Who of us can truly claim to know where this inspiration comes from?"

Over the past two decades, Interfidei has time and again confronted taboos. Elga recalls being interrogated by police for hours on end. In 1994, the organization held a number of seminars on Confucianism, which at the time was not a religion recognized by the state. "The police who interrogated us admitted to knowing absolutely nothing about Confucianism," remembers Elga. "They said that they were just following orders."

Back then, the threat to the organization came from the state. Now, the proponents of pluralism face a diversity of opponents and dangers, including terrorist attacks, bloody unrest between Christians and Muslims, and deadly attacks on minority groups such as that against the Ahmadiyyah by Islamist mobs. With increasing frequency, violent events are casting a disturbing shadow over the multi-religious and multi-ethnic archipelago and its young democracy.

"The state does not protect its citizens," complains Elga. "It does not employ force against violence prone fundamentalists." This makes it all the more important to conduct civil society dialogue in all directions – even including radical circles.

These efforts have borne fruit. Aswar Hassan has travelled to Yogyakarta for the 20th anniversary celebrations of DIAN/Interfidei. In 2000, this powerful man from South Sulawesi co-founded the "Preparatory Committee for the Implementation of Sharia Law" (KPPSI) and served seven years as its Secretary General. The Committee also includes representatives of violent groups, some of whom have been imprisoned for their participation in terrorist activities.

In 2001, Hassan took part in a DIAN/Interfidei seminar. "It opened up a door to dialogue for me at a time when others simply pegged me as a fundamentalist, only because I moved in fundamentalist circles."

"DIAN/Interfidei is a unique organization with respect to its consistent, deep, and serious efforts in promoting pluralism," says Anis Fakhrihatin, head of the teacher network. "During anti-terrorism campaigns, numerous domestic and foreign NGO turned to religion teachers," remarks Anis. "All at once, they wanted to talk to us about human rights, gender issues, and social justice. But after the workshops, we never heard from them again," criticizes Anis.

DIAN/Interfidei is like a construction site where we all join efforts – with our different tools and techniques – to build a common house in which there is room for everyone," says Jacky Manuputty. The pastor from Ambon, site of bloody unrest between Christians and Muslims, had his own house burned down by Christians, because he promoted reconciliation with Muslims.

Jacky reminds his colleagues on this interdenominational construction site of humanity not to distance themselves from the grass roots. Here, economic problems count first and foremost. Then he reiterates that Indonesia has a great deal of experience in pluralistic co-existence and solving social problems. "We don't have to reinvent the wheel," says Jacky. "The common folk have the most experience in solving problems. We can learn the most from normal life and daily communication between neighbours."

Home
Print
Newsletter
More on this topic
Muslims and Christians in Indonesia: Interreligious Dialogue in a Time of TensionFranz Magnis-Suseno: "Every Religion Is Essentially Humanistic"Why 72 Per Cent of Indonesians Want ShariaViolence against Minorities in Indonesia: Democracy without Tolerance
Related Topics
Dialogue of Cultures | Intercultural Dialogue, Dialogue of Religions, Freedom of religion, Indonesia's opposition
All Topics

Water buffalo and oxen have been part of the work in Indonesian fields for centuries. But the draught animals are no strangers to sport either, as can be seen in two traditional ... END_OF_DOCUMENT_TOKEN_TO_BE_REPLACED

According to the latest Reuters tally, more than 2.54 million people are now reported to have been infected by the novel coronavirus globally and 177,004 have died. As Muslims ... END_OF_DOCUMENT_TOKEN_TO_BE_REPLACED

Around the Islamic world, lockdowns and curfews are being extended and religious ceremonies are being cancelled outright in the hope of slowing the spread of COVID-19. Here’s the ... END_OF_DOCUMENT_TOKEN_TO_BE_REPLACED

While some are beginning to protest the lockdown, others are unable to bury their loved ones in accordance with Islam. Here’s the latest from across the region END_OF_DOCUMENT_TOKEN_TO_BE_REPLACED

Coronavirus continues unabated. Iran remains a hub of infection, war-torn Syria has recorded its first case and Yemen is bracing itself for the worst. Here’s the latest from ... END_OF_DOCUMENT_TOKEN_TO_BE_REPLACED

As COVID-19 sweeps across the globe, it is forcing religions to adapt and take action to prevent infection. But experts warn against using the crisis to fuel conspiracy theories. ... END_OF_DOCUMENT_TOKEN_TO_BE_REPLACED
Author:
Anett Keller
Date:
Mail:
Send via mail

END_OF_DOCUMENT_TOKEN_TO_BE_REPLACED
Social media
and networks
Subscribe to our
newsletter