Dialogue of religions
House of One: Berlin lays cornerstone for religious understanding

Last week, in the heart of Berlin, a group of Christians, Jews and Muslims laid the foundation stone for a joint house of worship that will feature a church, a synagogue and a mosque. Those involved have high expectations for the project: "the idea is bigger than the building". By Christoph Strack

For years it had been just an idea. Then, at the end of May 2021, it began to take actual shape. A cornerstone was laid on the future site of House of One, a building project by Christians, Jews, and Muslims looking for a place to meet. Located in the middle of Berlin, the site is just minutes from some of the city's most popular and historic areas.

"This is an important project for Berlin," said Pastor Gregor Hohberg, who helps lead the initiative. "Jews, Christians, Muslims, as well as atheists and people from other religions, have been talking about it for at least ten years." The city needs a place like House of One, Hohberg added, to offer the opportunity to engage with one another. "It's an extremely important symbol," he said, calling the site a "place of peace."

House of One is building on 700 years of Berlin history. Its location is close to where the city began and was the site of the Petrikirche. The 13th-century church had the highest tower in Berlin, and it survived in various forms until the East German communist government tore it down in 1964. The area has been a treasure trove for archaeologists, who have found remains of more than 3,000 people buried at the church, as well as ruins of other churches.

If all goes according to plan, House of One will stand atop this history within five years. It will be home to a church, synagogue, and mosque, built around a central meeting space, to serve as a symbol of coexistence. The designs call for a 40-metre-high structure of stone and brick. The construction budget of about 43.5 million euros ($53.3 million) has been largely secured. 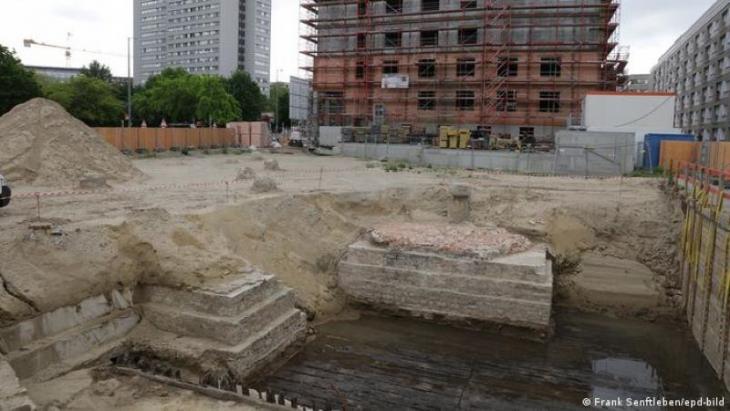 The House of One's future location was once the site of the 13th-century Petrikirche, which boasted the tallest spire in Berlin. The church survived in altered form until the East German communist government tore it down in 1964. The area has proven a treasure trove for archaeologists, who uncovered the remains of more than 3,000 people buried at the church, as well as evidence of additional ecclesiastical structures. Within five years, the House of One – with its church, synagogue, and mosque built around a central meeting space – will stand atop this history as a symbol of co-existence

The plan is of special significance for Osman Örs, an imam involved in the project. Berlin is home to more than 80 mosques and Islamic prayer spaces, but this will be the first in the centre of the city.

"This will become Berlin's most central mosque," Örs said. "Now and then, some Muslims get confused when they're looking on Google for a mosque in the city centre," he added with a laugh. Until now, all they find is a sketch posted at the construction site.

With the major, western monotheistic religions under one roof, antisemitism has become a topic for House of One to deal with, which Hohberg says is as pressing as ever. A fresh round of violence between Israel and Hamas, the Palestinian terror organisation, has sparked waves of protest around the world, including in Berlin. Some of the anger at Israeli airstrikes, which have killed hundreds of civilians, has spilled over into antisemitic tirades.

"It's important to always try to understand how someone else sees things, where someone is coming from or what they believe," Hohberg said. "Society profits when there's dialogue. And that's what we're doing here." 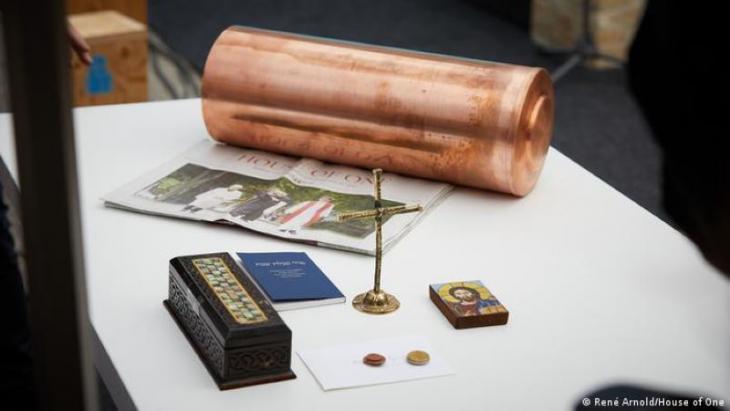 Time capsule witness to the founders' message of peaceful coexistence: "This is an important project for Berlin," said Pastor Gregor Hohberg, who helps lead the initiative. "Jews, Christians, Muslims, as well as atheists and people from other religions, have been talking about it for at least ten years." The city needs a place like House of One, Hohberg added, to offer the opportunity to engage with one another. "It's an extremely important symbol," he said, calling the site a "place of peace"

Even without a physical building, participants in House of One have already come together on a number of occasions, both joyous and sad, such as after attacks against Muslims in New Zealand, Christians in Sri Lanka, and Jews in the United States and Germany.

"We've become friends. We've seen to it that a rabbi, imam, and pastor stand shoulder to shoulder," Örs said. While extremism cannot destroy faith and peace, he said: "It can damage them. We have to actively do something about it."

The project has received significant political backing, including funding from the federal and Berlin state governments. The foundation behind House of One, which is led by Berlin's Mayor Michael Müller, includes prominent political leaders and heads of major public cultural institutions. Wolfgang Schäuble, an influential conservative politician who presides over Germany's parliament, the Bundestag, was one of several high-profile guests to attend the ceremonial laying of the cornerstone.

An international audience was in attendance. Azza Karam, the secretary-general of New York-based Religions for Peace, the largest multi-religious leadership platform, gave an address. People also tuned in via live stream from the Central African Republic and Georgia, where similar coexistence projects are underway.

Home
Print
Newsletter
More on this topic
Berlinʹs House of One: Offering a triune solutionThe Salaam-Shalom Initiative: Breaking down artificial wallsThe Berlin Project "House of One": Three religions under one roofOfficial "House of One" website
Related Topics
Christianity, Dialogue of Religions, Islam in Germany, Judaism | Jews, Places of Dialogue
All Topics

Giessen, Eichsfeld, Kusel, Berlin – cars bearing old German number plates are the latest trend on the streets of Cairo. Many Egyptians regard the discarded plates as chic. What ... END_OF_DOCUMENT_TOKEN_TO_BE_REPLACED

Tunisia has been going through a severe economic and political crisis in recent years. More than one in three young people there are unemployed. For many skilled, qualified and ... END_OF_DOCUMENT_TOKEN_TO_BE_REPLACED

German imams have publicly expressed their solidarity with the women of Afghanistan. In a letter of protest, the clerics say that the Taliban regime's decree barring women from ... END_OF_DOCUMENT_TOKEN_TO_BE_REPLACED

At the end of every year, the team at Qantara.de gives you a run-down of the ten most-read articles on the site over the past 12 months. Here is a quick overview of the stories ... END_OF_DOCUMENT_TOKEN_TO_BE_REPLACED

Social engagement is often motivated by religious factors. A new book explores the background to these community efforts and appraises how effective they are in helping to ... END_OF_DOCUMENT_TOKEN_TO_BE_REPLACED

The government in the Netherlands, one of the last European nations to abolish slavery, has made an historic apology. But some feel that there is still a long way to go. By Ella ... END_OF_DOCUMENT_TOKEN_TO_BE_REPLACED
Author:
Christoph Strack
Date:
Mail:
Send via mail

END_OF_DOCUMENT_TOKEN_TO_BE_REPLACED
Social media
and networks
Subscribe to our
newsletter