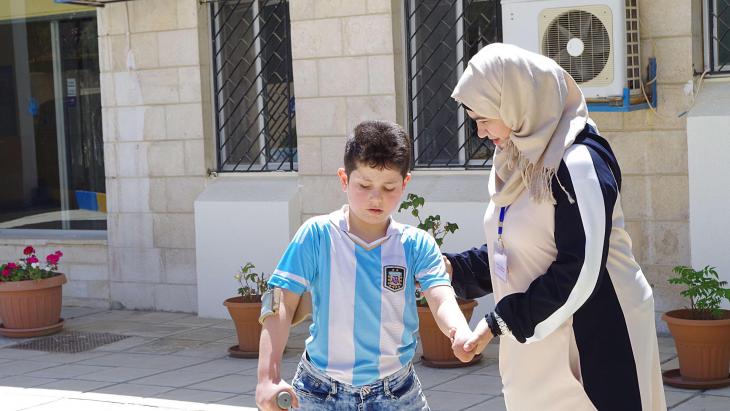 The lesser-known victims of war

Syrian refugee children with disabilities and war injuries are especially in need of help. The Al Hussein Society in Jordan offers them more than just therapeutic support; it also promotes the participation of people with disabilities in society. A report from Amman by Claudia Mende

Basil stands at the kerbside, undecided. "I'm scared," he says, but then he takes the plunge. On the way to the orthopaedic workshop he has to master a kerb that's almost 30 cm high. He is determined to conquer it. Carefully, he braces himself on his crutch with his healthy right arm and swings his left hip slightly forward. Physiotherapist Rasha Qasim supports the stump of his other arm and spurs him on. He made it! A broad smile spreads across Basil's face.

Basil Al-Riyabi is ten years old. Both his legs are amputated below the thigh and he has lost his left hand: the result of a barrel bomb attack by the Syrian air force on his home village in south-eastern Syria two years ago. Shrapnel has also left traces on his face and upper body. In his new life in Jordan, Basil first has to learn to walk with a prosthesis.

Some 600,000 Syrian refugees are now officially registered with the UNHCR in Jordan. Together with those who are not registered, they make up a total of 1.5 million – in a country with 6 million inhabitants. About one in three refugees suffers from a disability, war injury or chronic disease, as shown by a 2014 study conducted by the aid organisations HelpAge and Handicap International.

A modicum of UN support

Officially registered refugees receive a modicum of support from the United Nations, but there are no extra funds available for families with disabled children. Food subsidies for Syrian refugees have been reduced by half since early 2015. No international donors have come forward to help the UN maintain the previous level of support. And this aid is not even sufficient for minimum subsistence let alone special hardship cases.

It is non-governmental organisations such as the Al Hussein Society that take care of refugees with disabilities. This largest disability organisation in the country, founded in 1971, operates a special school in Amman for about 90 children aged ten years and under with various disabilities.

Basil is one of ten Syrian refugee children attending the school. He was placed in first grade, because after years of school closures in Syria he had forgotten almost everything. After a short time, he was the best in his class, and today he's the class clown. Many children can switch to a state school after the fourth grade. Hardly anyone pays tuition, because school is free of charge for children from socially disadvantaged families, whether Jordanians or refugees. Buses pick up children all over greater Amman in the morning and bring them back to their families in the afternoon. 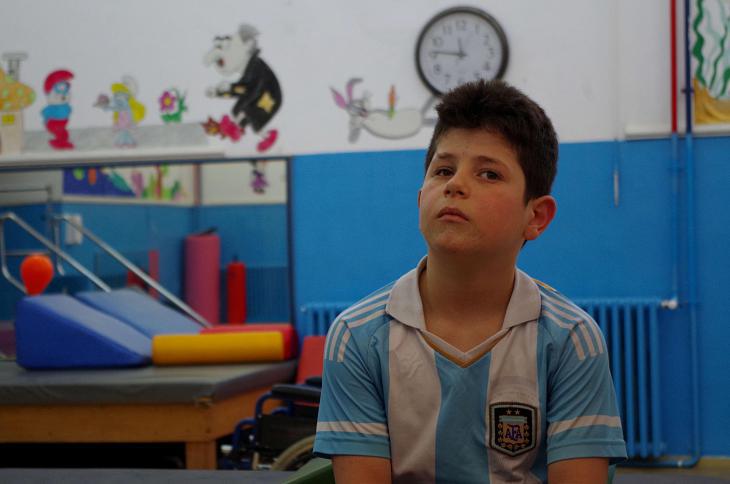 Passionate about football: although he's wearing the blue-and-white-striped jersey of the Argentine football hero Lionel Messi, Basil quickly points out that he's really a Real Madrid fan. You don't notice that he is severely traumatised

Once Basil has made it to the orthopaedic workshop, Dave Evans, a US rehabilitation specialist, takes a close look at his prostheses. Regular check-ups are necessary to make sure that tissues have not become inflamed. The prostheses have to fit exactly and be adjusted frequently as bones continue to grow. "For this boy, the war in Syria will never be over," says Evans. But with his strong will to live, he could very well lead an independent life someday.

These days he is still being carried every day by helpers when he has to climb stairs or overcome other hurdles. The private relief organisation "Syrians across the borders" took him in at one of their residences. He shares a room with two other underage boys. On the top floor of the home is a foosball table, which he absolutely loves. Basil's biggest passion is football in any form. Although he's wearing the blue-and-white-striped jersey of the Argentine football hero Lionel Messi, he quickly points out that he's really a Real Madrid fan. You don't notice that he is severely traumatised.

Psychologist Salwa Jarah tells us the whole story. When Basil came to the Al Hussein Society about one-and-a-half years ago, he was at once shy and aggressive. He cried constantly and cursed angrily at anyone who approached him. And no wonder, considering what he had been through. Right after the air strike he was driven in an ambulance across the border to Jordan and had surgery in Zaatari, a large refugee camp near the Syrian border. This is the only reason he survived at all. His father and brother were killed and the fate of his mother was unknown at first. He was finally able to get in touch with her again this year.

A new lease of life

After his life-saving amputation, Basil was first sent to live with a relative in the border town of Ramtha. But she sent him out on the street to beg. She put photos of him on Facebook to get compassionate souls to send her money – another fate facing children injured in the war. After a while, she simply left the boy to his own devices. Aides from the Al Hussein Society came to the rescue. Talking with the psychologist and finally living in a stable environment gave Basil a new lease of life. 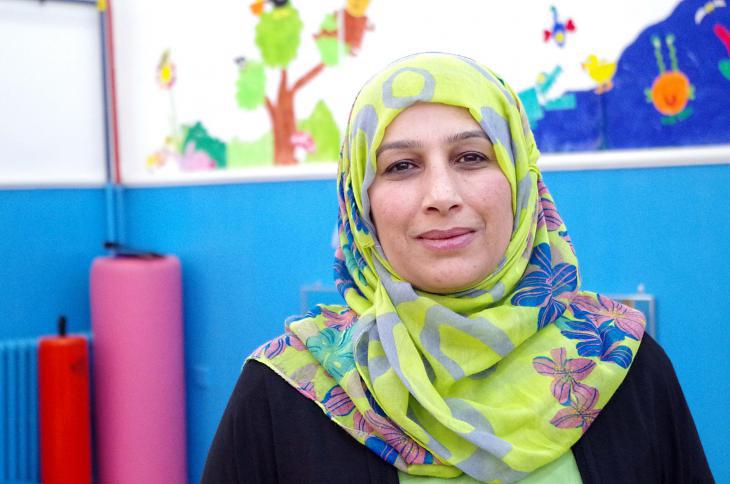 The recurring trauma of war: psychologist Salwa Jarah tells us that when Basil came to the Al Hussein Society about one-and-a-half years ago, he was at once shy and aggressive. He cried constantly and cursed angrily at anyone who approached him. And no wonder, considering what he had been through. Right after the air strike he was driven in an ambulance across the border to Jordan and had surgery in Zaatari, a large refugee camp near the Syrian border. This is the only reason he survived at all

The Al Hussein Society is financed through private donations, a small contribution from the Jordanian government and international patrons. More international funds have been forthcoming since the beginning of the crisis in Syria. Thanks to the support of the Christoffel-Blindenmission in Germany, wheelchairs, prosthetics and walking aids can be provided for free by the workshop in Amman to people all over the country.

Healthcare stations have been made wheelchair-accessible, also benefiting native Jordanians. The organisation aims not only to provide therapeutic help, but also to promote inclusion in society. The influx of refugees has made the issue of war injuries much more visible today in Jordan. People in wheelchairs or using walking aids are no longer an uncommon sight on city streets. This helps to break down prejudices and make disability a matter-of-course part of society.

These developments are very important for families with disabled children, who often suffer from the negative attitudes of those around them. Doaa Wyss, 24 years old, comes from Aleppo. After the health care system in Syria broke down, she fled to Jordan in 2013 with her husband, their two daughters and the now six-year-old Faisal.

Faisal has suffered since birth from the consequences of spina bifida and he needs intensive care. The lively boy is now in first grade at the special school. He enjoys painting and is good at arithmetic, but he can't walk on his own and needs a special walker as well as constant physiotherapy.

Wyss could never pay for this on her own. Her husband has found work as a mechanic in Zarqa, but still doesn't earn nearly enough to feed his family of five. A physiotherapist from the Al Hussein Society does exercises with the boy every week to increase the mobility of his legs. His mother has also been taught how to do the exercises at home with him.

Doaa Wyss can't imagine ever returning to Syria. Faisal could not be treated there. Acceptance is also much higher in Jordan. "In Syria, I faced a lot of negativity about Faisal," she says. "Here there is less prejudice and the neighbours love him". Help for refugee children in Jordan like Basil and Faisal is not only a major challenge. It also brings with it the chance for greater acceptance by society of people with disabilities.

Jordanian author Amjad Nasser, who died in 2019, presents an impressive tale of homelands, life in exile and the hardships of returning home. His profound eloquence and use of ... END_OF_DOCUMENT_TOKEN_TO_BE_REPLACED

Ten years after the start of the Arabellion in North Africa and the Middle East, many view the movement as a failure. But rather than being over, it has now entered a more mature ... END_OF_DOCUMENT_TOKEN_TO_BE_REPLACED

Financial woes had been part and parcel of UNRWA's work for years. In 2018, however, President Donald Trump dealt the organisation a deadly blow, deferring payment of U.S. yearly ... END_OF_DOCUMENT_TOKEN_TO_BE_REPLACED

The Human Rights Film Festival Berlin has been held for the third time in 2020 under the patronage of Nadia Murad. In just a short time, this festival, which was initiated by the ... END_OF_DOCUMENT_TOKEN_TO_BE_REPLACED

In recent weeks, Jordan's social media has been awash with photos and videos of demonstrators gathering in cities all over the country, chanting "Long live the teacher" and "we ... END_OF_DOCUMENT_TOKEN_TO_BE_REPLACED

Renowned Jordanian Islamic scholar Fehmi Jadaane vehemently objects to the transformation of Islam into an ideology. The religion ends up mired in a political swamp, he says, its ... END_OF_DOCUMENT_TOKEN_TO_BE_REPLACED
Author:
Claudia Mende
Date:
Mail:
Send via mail

END_OF_DOCUMENT_TOKEN_TO_BE_REPLACED
Social media
and networks
Subscribe to our
newsletter