Virtual Journey to the Artistic Treasures of the Islamic World

Much of Islamic art is in danger because of lack of preservation. Now curators from Europe and Islamic countries in an unparalleled concerted effort have initiated an Internet project to document an endangered cultural heritage. Ariana Mirza reports

The facade of the Mshatta palace is today kept in Berlin's Pergamon Museum, Germany, where it became an important source of information for oriental studies of Muslim art and decoration

​​The foundation of the 1260-year-old Mshatta Palace is located in present-day Jordan, yet for over 100 years the facade to its main entrance has been on display at the Museum for Islamic Art in Berlin. This architectural treasure from the Umayyad period was the gift of a Turkish sultan to the then German Emperor. Such an act of generosity was not an isolated case.

In addition, numerous finds from various archeological sites and the sale of antiquities have led to the remaining artifacts of Umayyad culture being dispersed among many museums and countries. The situation is similar with respect to other masterworks of Islamic architecture and art created in the Mediterranean region over the past 1300 years.

The Internet portal "Discover Islamic Art" focuses on the bountiful artistic treasures found in the Mediterranean region. Visitors to the virtual museum rooms will find interrelated exhibits, edifices, and archeological sites presented for the first time in their original context.

The recently opened web site features a permanent exhibition with over 1350 exponents of Islamic culture spanning 13 centuries and accompanied by descriptions placing the works in context. Starting in 2007, special exhibitions on particular themes will also be on display.

The curators of participating museums have carefully chosen exponents and have reconstructed how they interconnect. The organizers of the project are certain that both specialists and the general public will profit from the portal.

"Now it is possible to easily have a comprehensive grasp of the history of Islamic art from anywhere in the world," organizers stated at the presentation of the project in Berlin.

"Discover Islamic Art" was the result of a year long tour de force, involving the participation of a total of 42 museums from North Africa, the Middle East, and Europe. Not less than 17 museums from 14 countries act as coordinators on an equal basis.

The impetus for this cooperation was provided by the "Museum with No Frontiers" initiative. Its director Eva Schubert took a leading role in the project. It has been a task demanding unrelenting commitment. "I once had to answer an SMS at three o'clock in the morning, because someone in Syria urgently required information," she recalled. 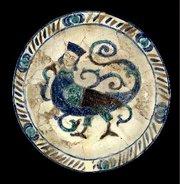 The project has initiated cooperations among Museums, for instance among the National Museum in Damascus and the British Museum in London

​​Representatives of Arab and European cultural institutions have established a closer relationship through their joint work on the "Discover Islamic Art" project. "Our current cooperation opens the door to further cultural contacts between the participating countries," explained Mohamed Najjar from the Department of Antiquities in Amman, Jordan.
The multilateral character of the project

It is also hoped that the Internet portal will provide a boost to private tourism to regions of North Africa and the Middle East. The original sites of these cultural treasures have been receiving renewed attention. Visitors to the portal can explore historically significant regions on its so-called "exhibition streets". This virtual travel should encourage viewers to embark upon a real excursion.

The multilateral character of the project is also reflected in the presentation of the virtual museum. Dates are provided according to both the Islamic and Christian calendars. English, French, and Arabic equally serve as the main languages of the portal. The web pages exhibiting exponents from the Museum of Islamic Art in the Berlin Pergamon Museum also feature commentary in German.

As of 2007, "Discover Islamic Art" can also be accessed in participating museums on special computer terminals. Museum guests are expected to be particularly interested in the ability to zoom in on images displayed on the computer.

"This will enable viewers to first appreciate the facade of the Mshatta Palace in its entirety and then use the computer display to explore details that are 8 or 10 meters up on the structure," explained Claus-Peter Haase, director of the Museum for Islamic Art.

Translation from the German: John Bergeron

Discover Islamic Art
Developing a "Museum with No Frontiers"
Experts from 15 countries met in Berlin to prepare a new project, aiming to create a virtual network made up of various museums north and south of the Mediterranean. Youssef Hijazi participated in the event

"Museum with No Frontiers"
Countering the Destruction of Islamic Culture
The conflict in the Middle East is a threat to many valuable objects that are part of the Palestinian cultural heritage. A European-Mediterranean collaborative organization is trying to do something about it. By Werner Bloch