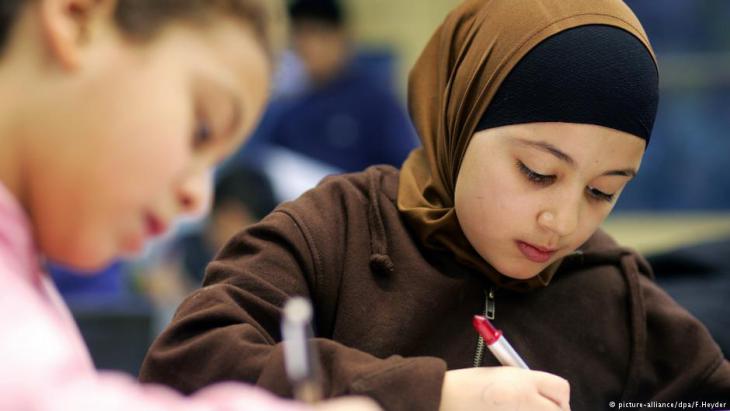 Discrimination in schools
Better marks without a headscarf

All children are supposed to have equal educational opportunities – that sounds good in theory. In reality, however, many pupils of migrant origin experience discrimination. A number of initiatives in Berlin are committed to changing this. By Nicole Sagener

Amina Nisic′s daughter never really had any problems at her school, until she wanted to switch to a grammar school where she would be able to do her university entrance exams. ″At a meeting to discuss pupils′ marks, the teachers decided against recommending her for the sixth form, claiming that my daughter wouldn′t be up to it in any case,″ explains Nisic. She found this incomprehensible because her daughter had the best marks in her year. This is not the first time that Amina Nisic has seen her 16-year-old daughter confronted with such hurdles. The girl has insisted on wearing a headscarf ever since fourth year.

Whenever obstacles are placed in her daughter′s path, 42-year-old Nisic goes into action. Because teachers at her previous school had repeatedly advised the girl to remove her headscarf in order to get better marks, she started looking for another school in the area. Nisic also spoke to her daughter′s class teacher at the new school, who had greeted the girl in front of her classmates with the words: ″look, here comes a girl in a full-body condom.″

The teacher apologised, claiming that it had been ″only a joke.″ However, when it came to recommending her for the sixth form, the teachers dug in their heels. Her daughter was only given permission to switch to a grammar school after Nisic made an appointment with the regional school supervisory board in Berlin Neukolln and talked to the department head there. By then it was too late to submit an application to a school, however. ″Very frustrating,″ says Nisic.

There are many examples: a lack of help with translation at parents′ evenings, the fact that educated parents of non-migrant origin dominate parent teacher associations, a ban on speaking Turkish in the playground and experiences such as Amina Nisic′s. A ″non-German″ appearance also plays a major role, she explains – which just goes to show how frequently certain physical characteristics are equated with being German. 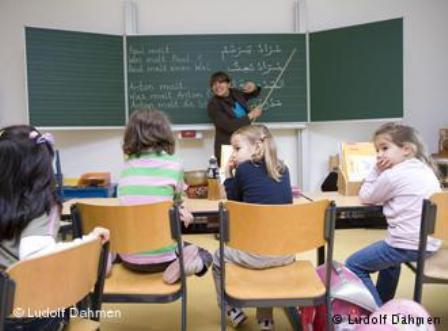 "Many of the problems can be avoided by investing at an early stage, for instance by providing language tuition to pupils with shortcomings or by having teachers and social workers of migrant origin," says district mother Emine Elci

And yet things don′t have to be this way, as Emine Elci knows. Born in Berlin to Kurdish immigrants from Turkey in the early 1970s, she was one of the first ″guest worker″ children there. ″I hardly spoke any German, but the teachers supported me a lot,″ she says. ″That gives you lifelong strength.″

Today Elci has five children herself and hears time and time again about children of her friends and family ″who are written off by their teachers as being the long-term unemployed of the future simply because of their ethnic background or social status.″ In many cases, it is also said that girls who wear a headscarf will only end up as housewives anyway.

Elci knows the problems in Berlin′s Neukolln district only too well. After qualifying there as a ″Stadtteilmutter″ – a ″district mother″ – she spent several years providing support to people who do not have sufficient knowledge of German or of the local bureaucracy. She later worked as an interpreter, gave private tuition classes and began running guided tours of the district – partly in a bid to put an end to prejudices and cliches. ″No matter where I go,″ she says, ″my headscarf initially causes irritation, which is part of everyday life even in Neukolln with its large migrant population.″

Teachers at schools also have certain expectations that parents from non-European countries often do not really know how to deal with, says Elci. ″Because nobody explains to them that teachers here are not the only authority, some are surprised to be invited to a parents′ evening or are taken aback by the fact that parents have rights of codetermination.″

What helps, she adds, is for parents to engage in an exchange, for example in the parents′ cafes that have been set up at some schools. ″Many of the problems can be avoided by investing at an early stage, for instance by providing language tuition to pupils with shortcomings or by having teachers and social workers of migrant origin.″

Many initiatives, such as the Turkish Parents′ Association in Berlin-Brandenburg and the Yekmal Association of Parents from Kurdistan, have long been committed to improving the educational opportunities for pupils of migrant background. As Ellen Kollender stresses, however, parents are neither able to nor should they have to face prejudices and discrimination all on their own – she believes that politicians and schools also need to take action.

Meanwhile there are an increasing number of positive developments, such as intercultural seminars in teacher training programmes in some of Germany′s federal states. Other approaches are aimed at inclusive nurseries and schools – like the Berlin-based ″Fachstelle Kinderwelten″ initiative. Emine Elci is also hoping to see further progress being made. ″Schools are simply made of bricks and mortar and cannot do anything wrong per se,″ she says, explaining that the key point is what the school system does with them. Nonetheless, Amina Nisic′s daughter can only hope that the situation will be better for future pupils – she herself has to accept the fact that she was unable to switch to a grammar school and now has to attend a less academic secondary school.

Home
Print
Newsletter
More on this topic
Freedom of religion at work: Islam – a disruptive influence?The perception of Islam as the enemy: When fear creeps inIslam and the West: What Islamisation?Qantara dossier: Clothing controversy – the headscarf debate in Germany
Related Topics
Education, Islam in Germany, Racism | discrimination, The Headscarf Controversy
All Topics

Award-winning poet Dincer Gucyeter’s debut novel is a tour de force through the German reality he experienced as an artist and son of Turkish immigrants, written with an unsparing ... END_OF_DOCUMENT_TOKEN_TO_BE_REPLACED

Sudanese protesters have been calling for the removal of German diplomat Volker Perthes from the UN mission to the country. Despite the fractious nature of post-dictatorship ... END_OF_DOCUMENT_TOKEN_TO_BE_REPLACED

We are in favour of human rights. But One Love armbands are self-righteous and ignore some fundamental issues. Stefan Buchen examines the debate surrounding the World Cup in Qatar END_OF_DOCUMENT_TOKEN_TO_BE_REPLACED

Education for girls and women is still possible in Afghanistan, says Reinhard Eroes of the Kinderhilfe Afghanistan initiative. In interview with Elisa Rheinheimer, he talks about ... END_OF_DOCUMENT_TOKEN_TO_BE_REPLACED

In Doha, Arabs from Morocco, Tunisia, Egypt and Algeria are gathering to celebrate the first ever FIFA World Cup to be held on Arab soil. The criticism from Europe? Over the top, ... END_OF_DOCUMENT_TOKEN_TO_BE_REPLACED

Canan Topcu came from Turkey to Germany as a child. In her essay, she describes how bothered she was by the racism she encountered in her country of origin when she travelled ... END_OF_DOCUMENT_TOKEN_TO_BE_REPLACED
Author:
Nicole Sagener
Date:
Mail:
Send via mail

END_OF_DOCUMENT_TOKEN_TO_BE_REPLACED
Social media
and networks
Subscribe to our
newsletter