For more than 50 years, the Bedoons have been living in Kuwait without citizenship status. Now, it seems this problematic situation is finally being addressed. There may be light at the end of the tunnel. By Dina Elbasnaly

"I have a dream: that my child and yours can live as equals, and that my child will not feel inferior to yours." This is the message that Alaa al-Saadoun recently shared on social media in the hopes that Kuwait will afford citizenship rights to the country's stateless Bedoon minority.

Alaa al-Saadoun is a Bedoon herself. The Arabic term roughly translates to "without nationality," and refers to a group of people who live in Kuwait, yet have neither that country's nor any other citizenship. They are a stateless people.

Saadoun is deeply concerned about the future of her children, whose national identity has not been officially certified. They are still too young to go to school. But Saadoun fears they will be refused an education because of their Bedoon status.

Like all Bedoons, she is troubled by being denied citizenship rights. "They are refusing to respect our human rights," she says. She adds that despite having a Bachelor's degree in English literature from Kuwait University, she cannot find work because of her legal status.

Saadoun is among Bedoon protesters who were recently arrested by Kuwaiti authorities after a demonstration. The rally was triggered by the suicide of a young Bedoon man.

He had been denied an official Kuwaiti ID and subsequently lost his job.

At least 15 Bedoons were arrested in connection with the demonstration. Among them was the prominent human rights lawyer Abdelhakim al-Fadhli. 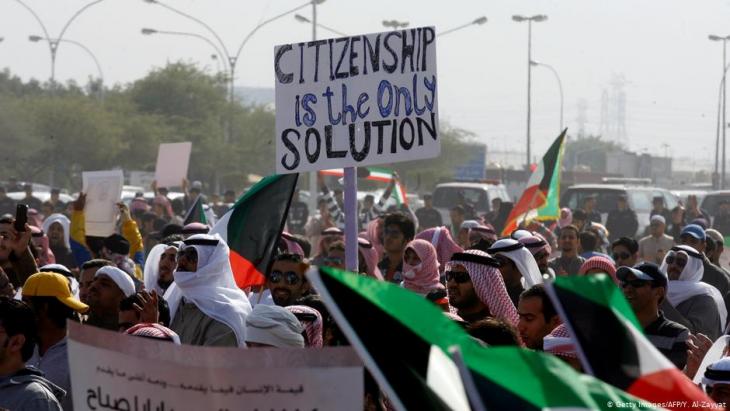 Expressing the hopes of many: "I have a dream: that my child and yours can live as equals, and that my child will not feel inferior to yours." This is the message that Alaa al-Saadoun recently shared on social media in the hopes that Kuwait will afford citizenship rights to the country's stateless Bedoon minority

The history of the Bedoons

The history of the Bedoons goes back to 1961, the year Kuwait gained independence from Britain. At the time, a number of people living in the region – particularly Bedouins – did not deem it necessary to apply for citizenship. According to Kuwaiti law, they have "undefined citizenship status".

Kuwaiti nationality law has not been reformed since, and many of these "undefined citizens" still have not applied for Kuwaiti nationality. They, along with their offspring, are officially stateless, which has made their lives tremendously difficult.

After the recent protests, the state reportedly took questionable measures against the activists. One protester who had been arrested was described by the Kuwaiti Interior Ministry's Twitter account as an "illegal resident."

A 2018 report by the group Human Rights Watch says there are approximately 100,000 Bedoon people in Kuwait. A special Kuwaiti state department deals with regulatory issues and renews their security cards, yet these do not count as proper proof of identity.

In an official statement, the Kuwait Society for Human Rights criticises the situation of Kuwait's Bedoons as "worse than ever before". It argues that the "state department responsible for them has taken arbitrary measures and is exerting pressure on the majority of the Bedoon people."

During the Iraqi invasion on Kuwait in 1990, some Bedoon people sided with the aggressor. Since then, parts of Kuwaiti society reject the Bedoons as disloyal. That some of them fought alongside Kuwaiti nationals against Iraqi forces has done little to dispel this prejudice. Some Bedoon people, incidentally, also fled to neighbouring Saudi Arabia when war broke out.

The recent arrests of Bedoon protesters "aggravates an already tense situation," says Amnesty International's Middle East Research director, Lynn Maalouf. She adds that "authorities denying them citizenship are denying them a range of basic rights, including the right to health, education and employment. They are also making it impossible for them to become an integral part of Kuwait's vibrant society."

These arbitrary arrests primarily targeting peaceful protesters, activists and human rights defenders in #Kuwait are not only unlawful, but are set to exacerbate an already tense situation brought to the fore by the young man’s suicide- @lynn_maalouf https://t.co/8qMpLIBorR

Time to solve the problem

Alaa al-Saadoun says Kuwaiti "citizenship is the prerequisite for all other rights." And that is why she wants to "solve this issue as soon as possible, to spare my children such a difficult situation."

In 1999, former Kuwaiti Emir Jaber Al-Ahmad Al-Sabah issued a decree according to which each year, 2,000 Bedoons would be granted citizenship. Yet according to media reports, such a small annual contingent has done little to improve their lot overall.

Lynn Maalouf says "it is time that authorities tackle this issue head on. They should ensure that all Bedoon people can make use of independent, fast and fair legal procedures when applying for citizenship."

An end to the suffering?

Thamer al-Suwait, deputy spokesperson of the National Assembly, also urges that a solution to the Bedoon issue must be found. "The state must recognise their citizen and social rights, while insisting they respect the law," he said.

The parliament's Twitter account recently announced that Kuwaiti authorities were looking into solutions and would present the results in the next legislative term. This would bring an end to decades of uncertainty and suffering for the Bedoons.

Home
Print
Newsletter
More on this topic
Interview with Rola Dashti, member of the Kuwaiti parliament: "Kuwait is a democracy"Interview with Mohamed Al Rumaihi: "Kuwaiti women are pioneers of reform"Book review: "The Bamboo Stalk" by Saud Alsanousi: A life uprooted and replanted
Related Topics
Democracy and civil society, Human rights, Iraq War, Islam and democracy, Rule of law
All Topics

Philosopher Juergen Habermas was due to be awarded a major Arab prize in Abu Dhabi, but has turned it down following criticism. This decision torpedoes Arab efforts at a ... END_OF_DOCUMENT_TOKEN_TO_BE_REPLACED

In his book "Ground Zero: 9/11 und die Geburt der Gegenwart" (Ground Zero: 9/11 and the Birth of the Present) Islamic scholar Stefan Weidner analyses the consequences of the ... END_OF_DOCUMENT_TOKEN_TO_BE_REPLACED

As Qatar prepares to host the 2022 FIFA World Cup, the country has come under fire for its treatment of migrant workers, with some nations calling for a boycott of the contest. ... END_OF_DOCUMENT_TOKEN_TO_BE_REPLACED

German Middle East analyst Guido Steinberg and television journalist Ulrich Tilgner have both published new books on the conflicts in the Middle East. Their analyses and their ... END_OF_DOCUMENT_TOKEN_TO_BE_REPLACED

Televised Turkish dramas are all the rage in the Middle East. A young Ottoman TV Empire has been expanding its soft power by harnessing regional dialects, Arabic names and viewers ... END_OF_DOCUMENT_TOKEN_TO_BE_REPLACED

Comments for this article: The Bedoons – Kuwait's stateless minority

In the aftermath of the Gulf war, after Kuwait's liberation from Iraqi troops, I was entrusted, in the context of a Joint UN Support to war victims, returnees, refugees etc., as the IOM Chief of Mission in Iraq, with the reception and handling of populations deported from Kuwait which were pushed over the border to Iraq. The deportees were mostly Palestinians living and working in Kuwait, but also numbers of Bedoons were affected: obviously, the re-instated authorities in Kuwait intended to use the overall post-war chaos to get rid of that unwanted minority. UN / IOM took care of these deportees at the border, and could negotiate with Saddam's government a temporary acceptance of these displaced Bedoons in Iraq. While Saddam was politically exploiting this humanitarian move, the blame was now clearly on Kuwait. But neither the Liberation Coalition, nor the Arab League criticised Kuwait on this action. UN as well did not go to the public, at the time, for opportunistic reasons.

END_OF_DOCUMENT_TOKEN_TO_BE_REPLACED
Social media
and networks
Subscribe to our
newsletter