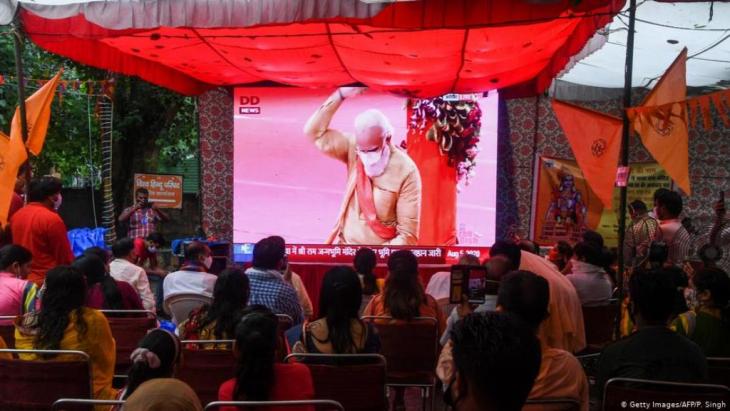 With the construction of a controversial Hindu temple in the city of Ayodhya, Indian Prime Minister Narendra Modi is marginalising the Muslim community. With his rhetoric, he is intentionally breaking with the post-colonial legacy of the Indian independence movement that saw India as a secular, multi-faith state. By Dominik Müller

In the summer of 2020, right in the middle of the coronavirus lockdown, Prime Minister Narendra Modi travelled to Ayodhya. This city in central India has been a political hotspot for decades: it is where the new temple to the Hindu deity Ram is due to be built on the site of the Babri Mosque, which was destroyed in 1992 by followers of the BJP, the Indian People's Party, which is now in government.

It was only in November 2019 that the supreme court in New Delhi gave the green light for the controversial temple to be built, after a decades-long legal battle between the two religious communities.

Modi came to lay the foundation stone for the Ram temple, for which his party and many Hindu nationalist organisations have been mobilising support for more than 30 years. The building of this temple was one of the central campaign promises in the election to India's lower house in 2019.

"This temple will become a symbol of our heritage, our unshakeable faith," Modi announced triumphantly. He began his political career in the Hindu nationalist volunteer organisation RSS, with the promise to dedicate his life to the fight for a "Hindu India".

The day on which the foundation stone was laid at the supposed site of the god Ram's birth, had "a significance for the country similar to that of Independence Day," he said. Just as "every part of society supported the struggle for freedom," he said, the building of the temple was founded on the "cooperation of people all over the country." 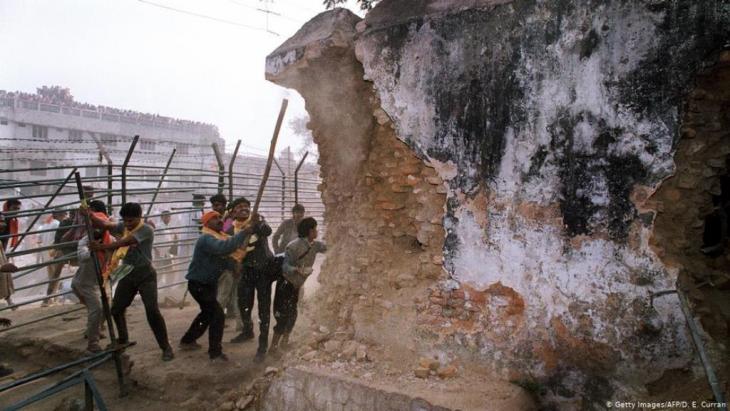 Destructive fanaticism in the fight for a Hindu India: the 16th-century Babri Mosque in the state of Uttar Pradesh was torn down in December 1992 by Hindu nationalists who wanted to build a temple to Ram on the site. Hindus believe that Ram was born in Ayodhya. The demolition of the mosque led to the worst religious riots in India since the country gained independence in 1947. Over 2,000 people lost their lives in the violence that followed

The RSS – which was founded in the 1920s and modelled on Mussolini's "black shirts" in Italy – played no role in India's battle for independence from the British colonial system. It was no match for the two most popular personalities in that movement, who took a very different political line: Jawaharlal Nehru, who later became prime minister of India, and Mahatma Gandhi.

Both had visited Europe and largely shared the anti-fascist attitude of their contacts there. They could not even contemplate the idea of cooperating with the axis powers of Japan, Germany and Italy in their fight against the British colonial masters.

Rewriting the history of the struggle for independence

Indian Muslims, by contrast, played a substantial role in the independence movement. Their share of the total population at that time – when the colonial empire encompassed modern-day Pakistan and Bangladesh – was much greater than it is now. By comparing the construction of the Hindu temple to the struggle for independence, Modi is deliberately excluding the 170 million Muslims in India today.

Two Muslim representatives may have been present at the laying of the foundation stone, but their function was little more than window dressing: the religious minority had most certainly not mobilised support for the building of the Ram temple. Since the Babri Mosque was destroyed 25 years ago, pogroms and lynchings against the religious minority have risen steeply, accompanied by hate propaganda from many BJP politicians.

Modi's comparison is another, symbolic break with the post-colonial legacy of the independence movement, which regarded the new India as a secular, multi-faith state. 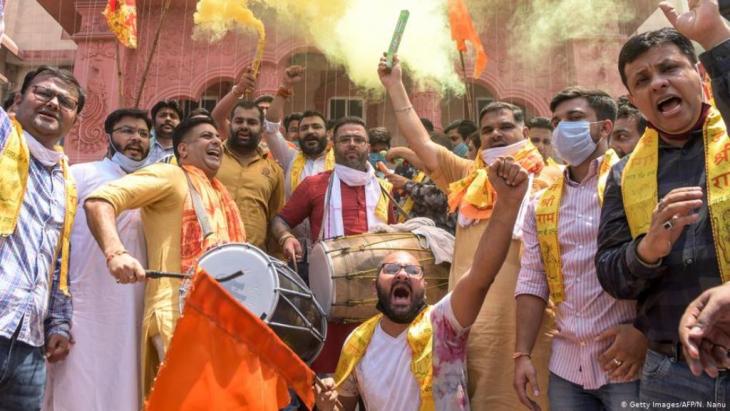 People celebrating in Ayodhya. In November 2019, India's Supreme Court ruled that the disputed holy site of Ayodhya should be given to Hindus, who want to build a temple to Ram on it. The case has been bitterly contested for decades by Hindus and Muslims. The court also ruled that Muslims would be given another plot of land for the construction of a mosque. The ruling led to protests across the country

"There is no comparison between the freedom struggle, which was a unifying struggle in which all sections of the country took part, and the Ramjanmabhoomi [building of the Ram temple] agitation, which was intended to polarise society and has been divisive," according to a lead article in the Deccan Herald the day after Modi's speech.

Hindu nationalists have been wanting to appropriate the independence movement for years, to increase their acceptance among the general population. To this end, the ruling Bharatiya Janata Party and its volunteer organisation RSS are cultivating a mythology of victimhood. India, they say, has throughout its history been repeatedly attacked by "foreign invaders" who oppressed the Hindu majority: first the Muslim Mogul rulers and later the British colonisers, who ruled over India until 1948. Gandhi, the icon of the independence movement, is hated by many Hindu nationalists: they hold him partially responsible for the "partition" of the former British Raj territory into India and Pakistan. Gandhi's murderer, Naturam Godse, also invoked this ideology, accusing Gandhi of having been too indulgent to Muslims.

Surging coronavirus cases in many parts of the world have overshadowed the start of this year's Muslim holy month of Ramadan, with festivities once again curtailed by contagion ... END_OF_DOCUMENT_TOKEN_TO_BE_REPLACED

As Qatar prepares to host the 2022 FIFA World Cup, the country has come under fire for its treatment of migrant workers, with some nations calling for a boycott of the contest. ... END_OF_DOCUMENT_TOKEN_TO_BE_REPLACED

The farmers' protests in India show no signs of abating – despite repressive measures. Government attempts to stigmatise the farmers have only prompted sections of the urban ... END_OF_DOCUMENT_TOKEN_TO_BE_REPLACED

Fanna-fi-Allah is the West's most renowned Qawwali ensemble. It stands out not only for its strong stage presence, but also for its commitment to preserving the centuries-old ... END_OF_DOCUMENT_TOKEN_TO_BE_REPLACED

Arundhati Roy's recent volume of essays and lectures provides an eye-opening account of current political developments in India. Written during the run-up to the last general ... END_OF_DOCUMENT_TOKEN_TO_BE_REPLACED

The ''German Khars'' are a family of craftsmen known in Srinagar for their skills repairing old German-made medical equipment. Their craft has been preserved for decades, but ... END_OF_DOCUMENT_TOKEN_TO_BE_REPLACED
Author:
Dominik Müller
Date:
Mail:
Send via mail

END_OF_DOCUMENT_TOKEN_TO_BE_REPLACED
Social media
and networks
Subscribe to our
newsletter