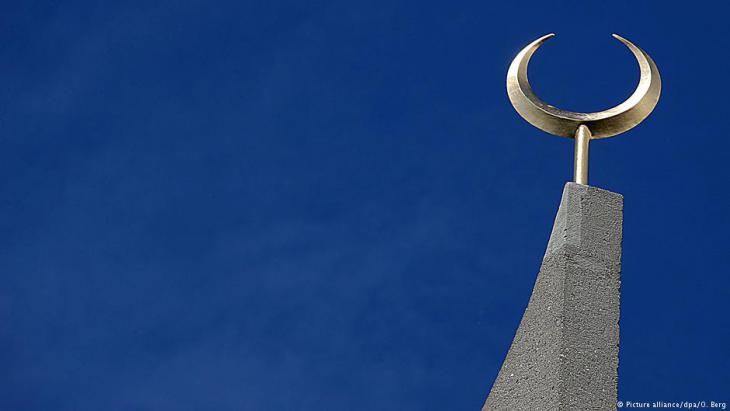 A place to pray, a place to meet

For many Muslims in western Germany, a dream has finally come true. Years behind schedule, the Central Mosque in Cologne finally opened its doors in the middle of Ramadan. The faithful can now pray there every day. Ulrike Hummel went along to see it

The gilded crescent was attached to the building just a few days before the opening and the pale green carpet was laid just in time. On the second Friday of Ramadan, one of the largest and most imposing mosques in Germany finally opened its doors after many years of construction. On this day, Friday prayers were held for the first time in the magnificent dome-topped prayer hall, the heart of the mosque.

"It is a wonderful feeling; a huge weight has been lifted from our shoulders," said Bekir Alboga, Secretary-General of the Turkish-Islamic Union for Religious Affairs (DITIB). Now at last, he said, the public can be invited in: "come and visit our open mosque. Speak to us about Islam, about DITIB; not without us, but with us."

For about 20 years now, members of Cologne's Muslim community with Turkish roots have been longing for an appropriate place to hold religious, cultural and social gatherings. Now that the main prayer hall has been opened for prayer, the days of having to pray in mosques that were hidden away in back streets and alleys are finally over. That in itself sends out an important message to all of society.

The semi-transparent dome curves above the prayer hall, reaching about 36 metres at its highest point. Light streams in through a huge star in the centre of the dome. A massive chandelier highlights the Arabic calligraphy; the minbar (pulpit) and the mihrab (prayer niche) are on the front wall of the hall. At any one time, up to 1,200 people can pray in the hall, the walls of which are decorated with 1,800 stucco panels. 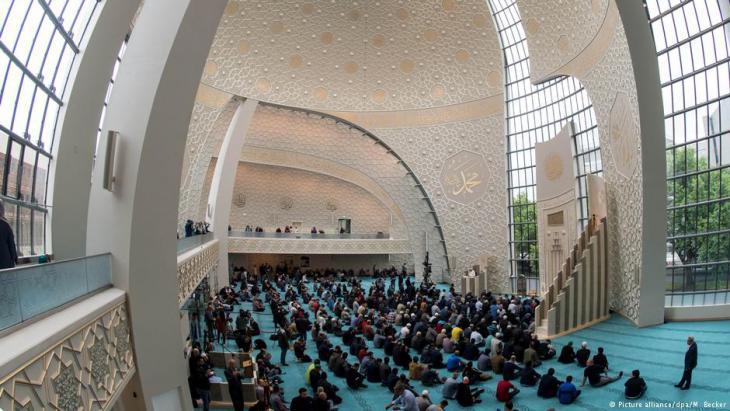 Imposing domed hall: the semi-transparent dome curves above the prayer hall, reaching about 36 metres at its highest point. Light streams in through a huge star in the centre of the dome. A massive chandelier highlights the Arabic calligraphy; the minbar (pulpit) and the mihrab (prayer niche) are on the front wall of the hall. At any one time, up to 1,200 people can pray in the hall, the walls of which are decorated with 1,800 stucco panels

The interior design combines oriental elements with contemporary Islam, which is reflected in the ceiling medallions with Arabic inscriptions in gold leaf. "These feature the names of all the great prophets who play an important role in Jewish, Christian and Islamic history," says Bekir Alboga. This, he says, is an invitation to interreligious theological discussion.

The renowned architects Gottfried and Paul Bohm won the architectural competition for the design of the mosque and were commissioned with its construction. "For Muslims, it is lovely to pray in a space like this. I hope that members of the majority society will come here, look at the mosque and experience the openness of the building," says Paul Bohm. As in many conventional mosques, a separate prayer-space is reserved for women: in this case it is a generously proportioned gallery that affords women an unobstructed view of the imam leading prayers. The gallery is reached by staircases along the side.

Separate areas for ritual ablutions can also be accessed from the gallery. "I think it is important that the women's area is just as beautiful as the men's," says 17-year-old schoolgirl Didem Dege, who came to Cologne from Plettenberg near Ludenscheid especially to see the mosque. She finds the mosque "really beautiful". "I've already taken photos and posted them online."

Visitors will want to linger on the imposing flight of stairs leading to the magnificent main prayer hall. The two minarets, from which there will be no calls to prayer, are 55 metres high, that's about a third the height of Cologne Cathedral. 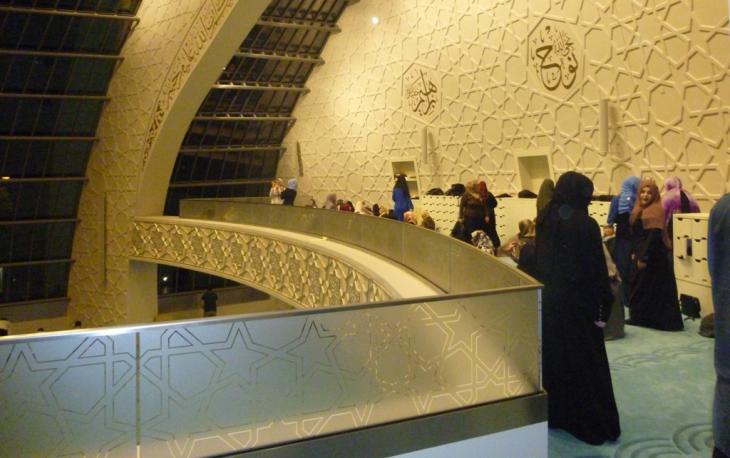 Before the mosque was built, debates about the shape and height of the minarets were often heated. In addition to the main prayer hall, the heart of the building, the complex includes seminar rooms, an administration wing, a library, a conference room and a shopping arcade.

The much-discussed problem of a lack of parking spaces has been resolved by the construction of an underground carpark. Construction of the complex cost about €30 million. According to DITIB, two-thirds of this sum were provided by donors; there were no public subsidies whatsoever. The mosque, which will be officially opened at a later date with a list of prominent guests, is now 95 percent finished, says Alboga. "The bazaar area is still not finished and a number of cosmetic repairs need to be carried out in the conference room."

Muslims can now pray in the mosque five times a day at fixed times. Friday prayers are open to all. "I think the mosque is beautiful and I'm definitely going to go and pray there," says Sarjas Hussein. The 27-year-old student has Kurdish roots and hopes that "the Friday sermons will always be translated into German". He says that he doesn't have a problem with attending a DITIB mosque as a Kurd. "I don't differentiate between Turkish, Kurdish or Arab Muslims. For me, all Muslims are brothers in faith."

Even renowned critics of DITIB, such as the Green MP from Cologne, Volker Beck, congratulated Germany's largest umbrella organisation for Muslims: "I am delighted that the permanent construction site is consigned to the past and congratulate DITIB on this success." Beck went on to say that the building also symbolises a promise that must be kept, namely "a modern Islam that is open towards Germany society and liberates itself from the binds of its migratory history and countries of origin" – something leaders in Ankara and Cologne still have to bring themselves to do. 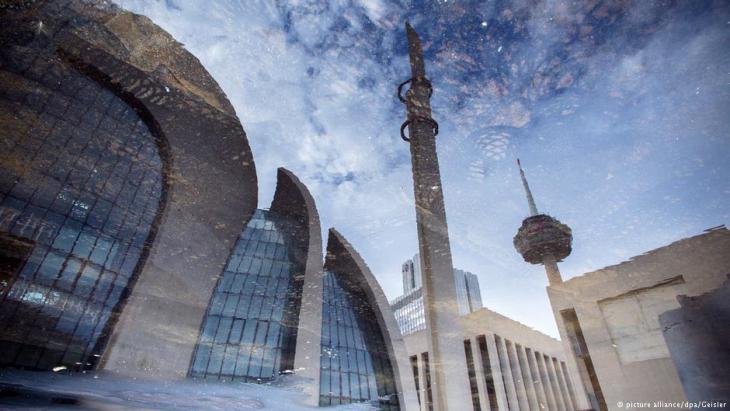 Seven and a half years since the laying of the foundation stone in November 2009 and Cologne′s Central Mosque with integrated community centre is for the most part complete. Despite the topping out ceremony having been held in February 2011, structural problems meant postponing the opening several times. The construction of the mosque triggered heated debate in some quarters. According to the architects′ drawings, the mosque features two 55-metre high minarets and a 37-metre semi-transparent dome. The complex also includes seminar rooms, an administration wing, a library, a conference room, a shopping arcade and an underground carpark

In recent months, DITIB has been in the headlines for all the wrong reasons. First of all, the wider public discovered that the union is influenced directly by the Turkish government of President Erdogan. Theologian and Professor Nevzat Yasar Asikoglu, is not only the chairman of the DITIB board, but also religious attache at the Turkish Embassy in Berlin and the representative of Turkey's Directorate of Religious Affairs (Diyanet) in Germany. At the Iftar reception on the evening of the day the mosque was opened, he emphatically rejected accusations of DITIB's dependency on Ankara.

Diyanet is based in Ankara and reports directly to the office of the Turkish Prime Minister. The close link between DITIB and Diyanet in Ankara is not least the result of the fact that the salaries of DITIB imams in Germany are paid by Ankara. However, political and social leaders have been aware of the link for years. 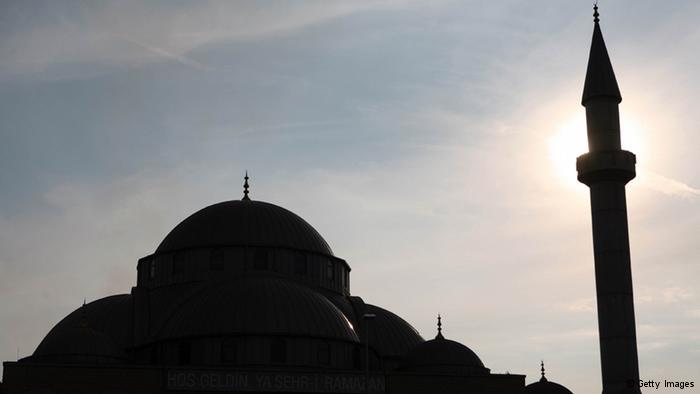 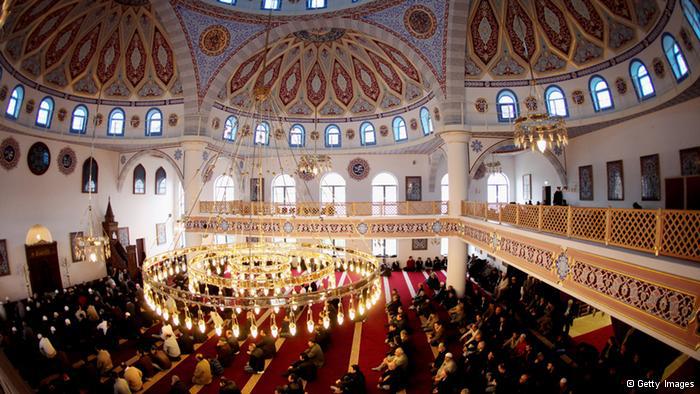 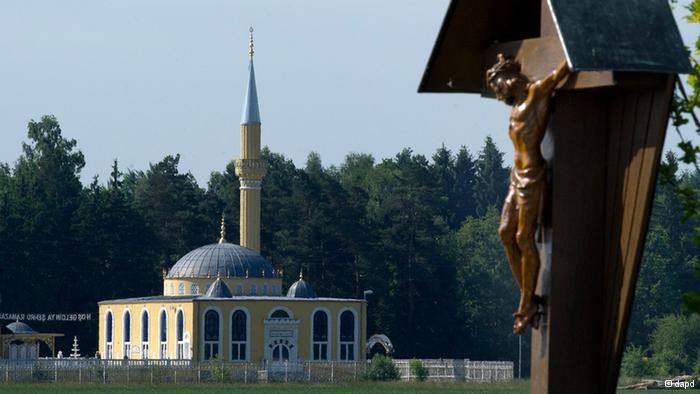 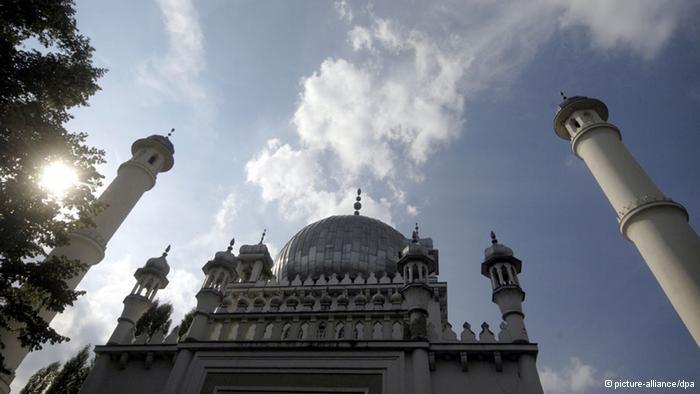 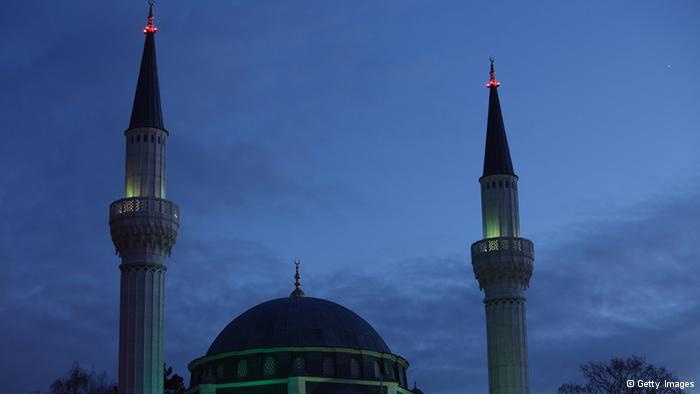 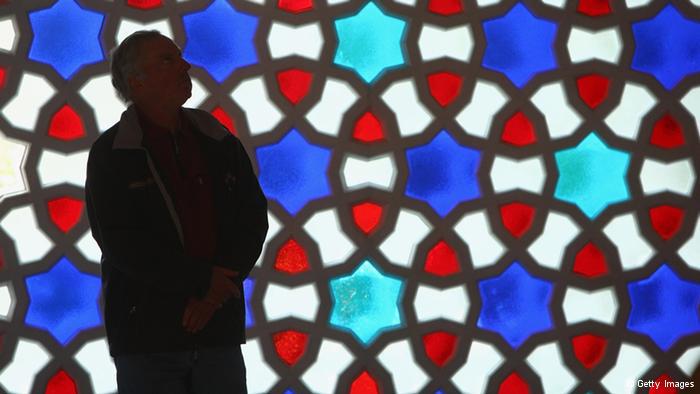 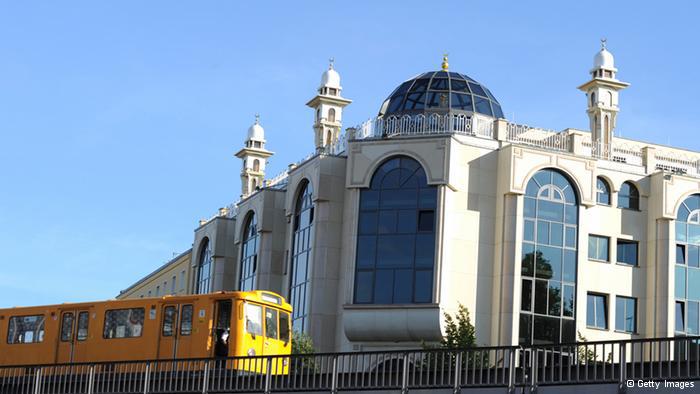 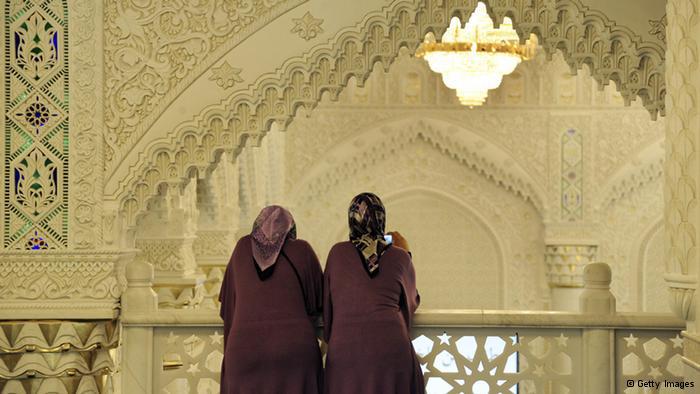 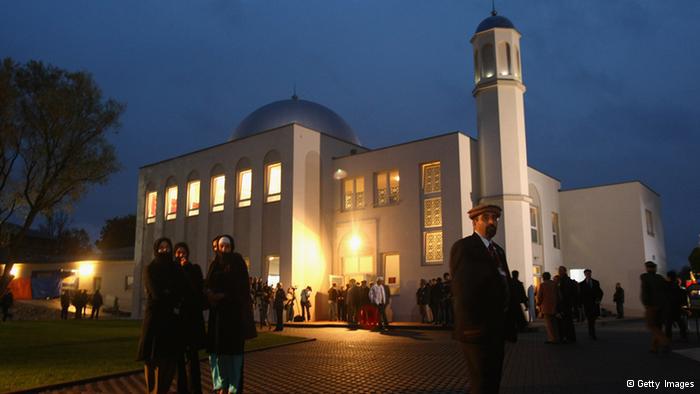 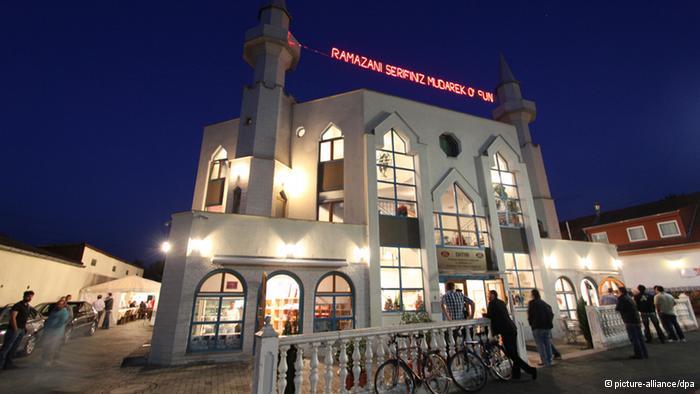 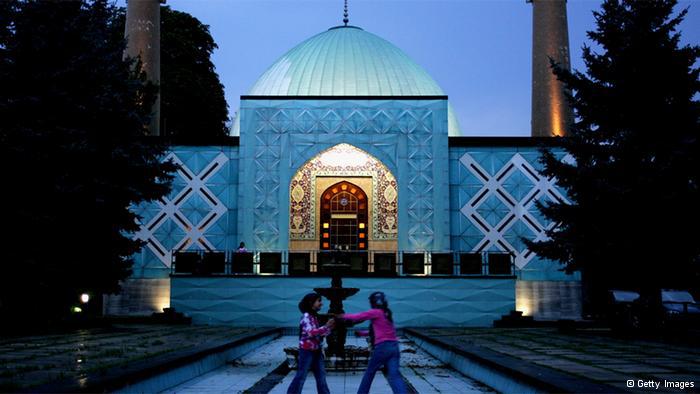 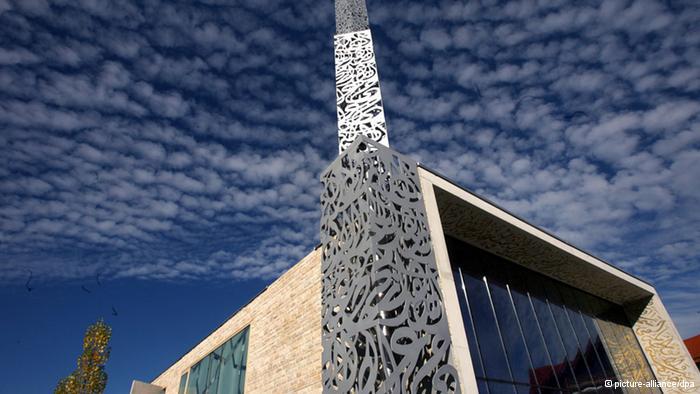 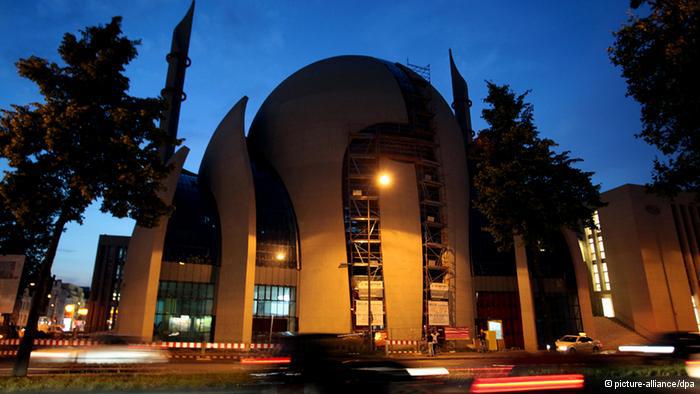 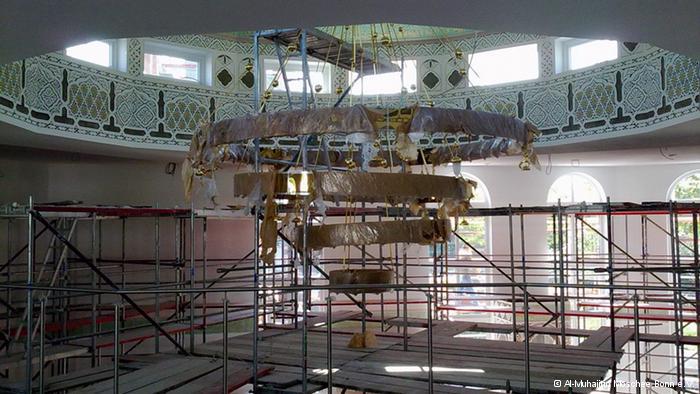 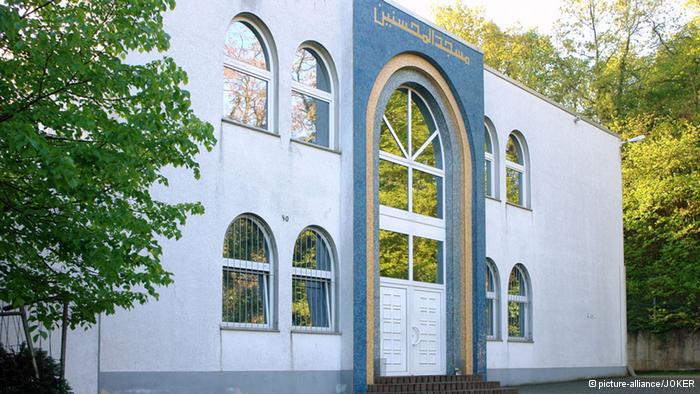 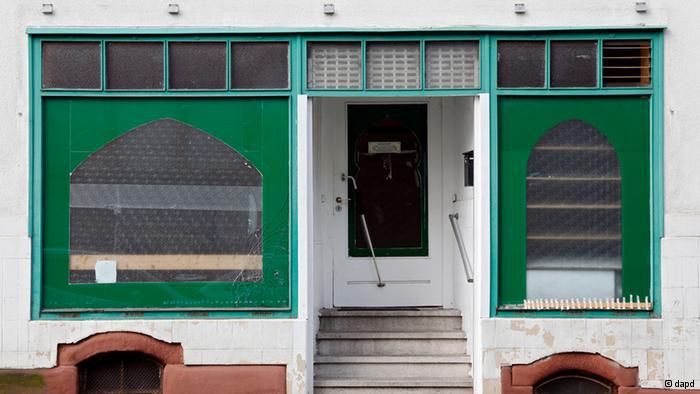 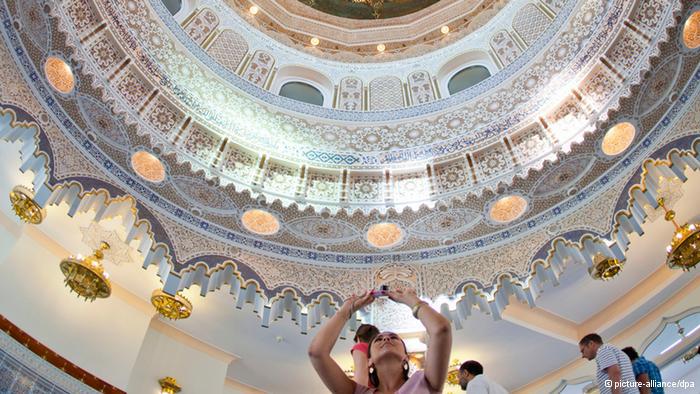 The second reason for the negative press coverage was the discovery that several DITIB imams were suspected of spying on supporters of the Turkish Gulen movement in Germany. The Turkish government accuses Fethullah Gulen, preacher and President Erdogan′s one-time close ally, who now lives in the United States, of being responsible for last summer's attempted coup in Turkey.

Early this year, DITIB conceded that some of its imams had been spying for the Turkish state. Germany's Public Prosecutor General responded by launching investigations into the imams on suspicion of working as agents for an intelligence service. According to the Federal Office for the Protection of the Constitution in the state of North Rhine Westphalia (NRW), 13 imams are currently being investigated. The government of NRW also distanced itself from DITIB and called on the union to detach itself both structurally and financially from Ankara. The dialogue between DITIB functionaries and German politicians faltered as a result.

The Federal Ministry for Family Affairs, Senior Citizens, Women and Youth temporarily stopped support for four of the six DITIB project currently receiving funding from the German government. "We are now back negotiating with a variety of ministries at federal and state level," says Bekir Alboga There are, he says, politicians who believe that DITIB should be removed from the line of fire as quickly as possible because of its indispensable services to integration.

The discussions with politicians, continues Alboga, focus among other things on a continuation of a variety of integration projects, but also on the establishment of a Muslim welfare association. Other important issues, he says, remain Islamic religious education and the "recognition of DITIB and other communities as Islamic religious communities."

Some companies in Germany are reluctant to hire Muslims. But it is not only the Muslim applicants who are losing out, so too are the companies. After all, there are multiple ... END_OF_DOCUMENT_TOKEN_TO_BE_REPLACED

The European Court of Justice has given its backing to companies that don't allow female Muslim staff members to wear headscarves – as long as they don't permit the wearing of ... END_OF_DOCUMENT_TOKEN_TO_BE_REPLACED

Ayaan Hirsi Ali’s new book "Prey" claims to examine how Muslim immigration threatens the rights of Western women. Indeed the injustices women face only seem to matter to her when ... END_OF_DOCUMENT_TOKEN_TO_BE_REPLACED

The Saudi national team is set to play the German Olympic squad at the Olympics in Tokyo later this month – a chance for the outsiders to make their mark. At the same time, and ... END_OF_DOCUMENT_TOKEN_TO_BE_REPLACED

I regret very much that I worked for the Bundeswehr. If the Taliban knock on my door, I hope they shoot me right away. Guest article by Ahmad Jawid Sultani END_OF_DOCUMENT_TOKEN_TO_BE_REPLACED

END_OF_DOCUMENT_TOKEN_TO_BE_REPLACED
Social media
and networks
Subscribe to our
newsletter