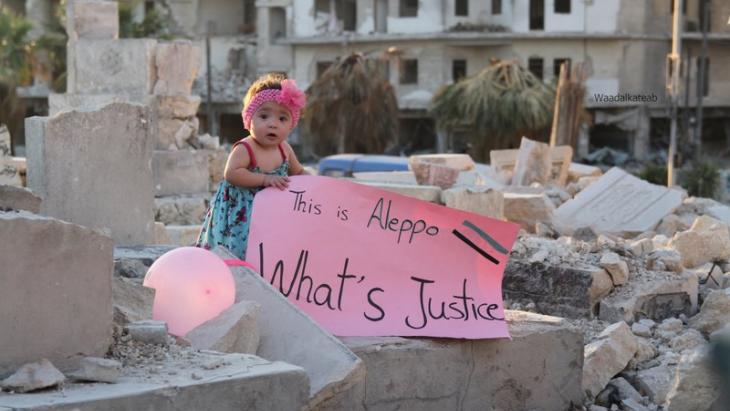 "For Sama", the film by Waad al-Kateab and Edward Watts that was crowned best European documentary at the last European Film Awards, gives us a very personal view of the war in Syria and the suffering of the civilian population. By Schayan Riaz

It looks like a scene from a horror film: a pregnant woman is admitted to a hospital in Aleppo with serious injuries. She has been caught in an aerial bombardment and her body is covered in wounds. The doctors have to act fast, so they opt for an emergency caesarian. To no avail, as it first appears. The newborn is completely motionless. The doctors massage its back, smack it gently on the bottom - they do everything in their power, of course, to save this baby. And suddenly, as if by some miracle, it opens its eyes. It starts to cry.

Edward Watts' and Waad al-Kateab’s "For Sama" is not for the faint-hearted. The documentary is full of uncomfortable moments like this, which make you hold your breath as you watch. The Syrian film-maker and journalist Al-Kateab, who has been reporting on the Syrian civil war for the British broadcaster Channel 4 since 2011, does not mince her words. She shows us the unutterable atrocities of the Syrian conflict with perfect clarity.

More than once as you are watching, you wonder how much more death and misery you can bear. And it is for this very reason that the film is essential viewing. It affords a genuine insight into the Syrian conflict, taking us beyond all the usual headlines.

In another scene, for example, you see two little boys mourning their brother, who has been hit by a shell. They are beside themselves; they had only just warned him not to play outside. They weep as they say their goodbyes to him, kissing his body. Their mother bursts into the hospital as well, wanting to carry her dead son away herself.

At this point it becomes clear that as a film-maker, but above all as a mother, al-Kateab is preoccupied with one question – and in a certain way, also with a sense of guilt: what does it mean to raise a child in a war zone, when other children are dying around you every day?

A love-letter and a time capsule

Al-Kateab approaches this in a direct way – she films her daughter Sama, and as she does so, she wonders if Sama will ever forgive her. She often speaks in two voices: first her own, and then her daughter’s: "Why did you give birth to me? The war has raged every day since I came into this world," she asks herself.

It is obvious that Waad wants to give her daughter a good life despite all this. And that fact gets under your skin: at the beginning of the film, we see Waad singing Sama a lullabye. Suddenly a bomb explodes somewhere outside, and the innocent Sama starts to smile. The family rush to escape down to the cellar, and even there, in the midst of the fear and uncertainty, they manage to keep Sama cheerful.

This time, it’s her father Hamza, head of the "Al-Quds Hospital", who pulls faces and makes Sama giggle. Whatever situation the couple find themselves in, however horrific their surroundings, Sama always has to be alright.

"For Sama" is first and foremost a love-letter from a mother to her growing daughter. But it is much more than that: Waad al-Kateab keeps her camera running constantly, telling the story of the Syrian civil war alongside the personal story of her own family, so that this film also functions as a time capsule.

The political background to the conflict is not explained in any detail – the focus is too heavily on the eponymous Sama for that – but you still get a good sense of the country and its people, and way they keep going in spite of it all. There is suffering everywhere, but people still get married, children are still born. People rejoice any time they get to see fresh fruit.

Waad’s wedding to Hamza is shot in intimate close-ups, so the viewer feels like they are in the room with them. Later, when Waad is pregnant and says this aloud for the first time in front of a mirror, she once again allows the viewer to participate in a very personal moment.

Hope for the future

"For Sama" is in dialogue with Feras Fayyad’s documentary "The Cave", which takes a similar approach. The film focusses on an underground hospital in the Ghouta region. In summer 2013, poison gas attacks were carried out on civilians there, and Fayyad shows the doctors giving their patients courage despite the horrific situation, making jokes and even celebrating birthdays on the ward. In short: life goes on, even in wartime. These scenes create a spark of hope, much like the scenes in "For Sama" described above.

Waad al-Kateab now lives in London. She managed to flee Syria with her family, and thankfully, Sama will not have to grow up in a warzone. "For Sama" has won a number of prestigious film prizes, and has rightly achieved worldwide recognition. But we must also think about all the children left behind in Syria, for whom the war is still a terrible reality. I am reminded of the little boy who tells Waad in the film that when he grows up, he wants to be an architect, so that he can rebuild Aleppo. I wholeheartedly hope he will realise his ambition.

For years the Arab intellectual elite looked to Lebanon, coveting its atmosphere of freedom. Feigning the non-existence of repression, Beirut welcomed intellectuals from across ... END_OF_DOCUMENT_TOKEN_TO_BE_REPLACED

The foreign policy direction favoured by Washington's new incumbent is putting a strain on relations with Turkey. The two nations look set to clash over a whole host of issues, ... END_OF_DOCUMENT_TOKEN_TO_BE_REPLACED

On the 10th anniversary of the Arab Spring we can’t quite escape that substance called remembrance. Yet, eschewing facile modes of nostalgic remembrance and/or tragic lamentation ... END_OF_DOCUMENT_TOKEN_TO_BE_REPLACED

Mass protests began in Egypt on 25 January 2011. They triggered the overthrow of long-time ruler Mubarak. Ten years later, many human rights activists and journalists are in ... END_OF_DOCUMENT_TOKEN_TO_BE_REPLACED

END_OF_DOCUMENT_TOKEN_TO_BE_REPLACED
Social media
and networks
Subscribe to our
newsletter