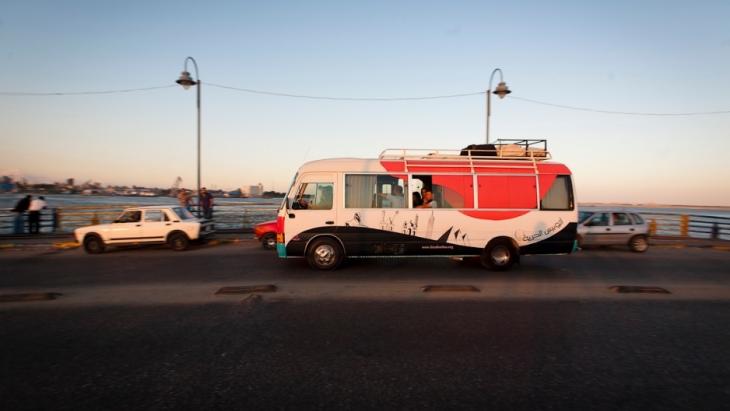 In 2011, the German-Iranian film director Fatima Geza Abdollahyan followed the "Freedom Bus" on its tour of Egypt. Along the way, she experienced many of the difficulties the campaign encountered in its attempts to raise awareness of the principles of democracy. Nevertheless, the resulting film makes compelling viewing. By Maha El Nabawi

Like her debut film in 2010, "Kick in Iran", Fatima Geza Abdollahyan's second documentary is devoted to a politically charged topic. The 90-minute documentary "Freedom Bus" takes the viewer on a journey through Egypt, a country making slow progress on the road to the unknown territory of democracy.

"Freedom Bus" tells the story of 39-year-old Ashraf Sharkawy, who abandons his comfortable life as a successful manager in Germany to launch a democratisation campaign in Egypt – by the people and for the people – shortly after the overthrow of Mubarak.

Sharkawy, who was born into an Egyptian family in Germany and grew up there, developed the Freedom Bus campaign with the help of a few volunteers. The aim was to raise awareness of the basic ideas and concepts behind democracy in order to encourage and enable Egyptians to take their future into their own hands.

From March to December 2011, Abdollahyan accompanied Sharkawy and his Freedom Bus on every kilometre of the journey through the provinces and witnessed the many failed attempts and obstacles that plagued this non-partisan democracy campaign in Egypt. Her film focuses mainly on the implementation of the project from an organisational standpoint, while also helping viewers to understand the emotional conflicts Sharkawy faced.

The film also highlights the often polarised views of democracy held by the Egyptian people. As they travel from city to city, Sharkawy and his team are continually bombarded with questions about their party affiliation and sponsors and are asked to respond to the ongoing debate about the possibility of a liberal form of Islam in Egypt.

Alienated from one's own culture 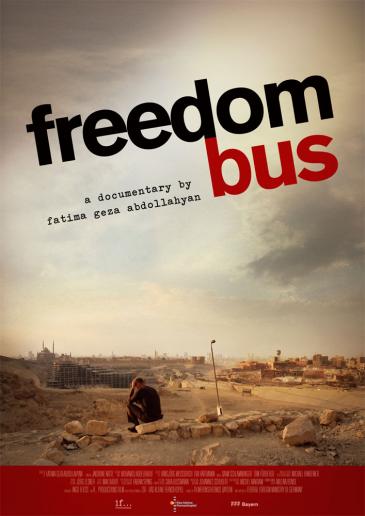 Carrying democracy to the people: the documentary film "Freedom Bus" tells the story of 39-year-old Ashraf Sharkawy, who abandons his life in Germany to launch a democratisation campaign in Egypt shortly after the overthrow of Mubarak in 2011

With a bachelor's degree in political science, a master's in international relations and an additional degree as a documentary filmmaker, Fatima Geza Abdollahyan certainly has an interesting background. The German-Iranian director gets her inspiration from Middle Eastern legends in particular.

Asked where she got the idea for "Freedom Bus", she replies, "Ashraf and I are old friends. We have much in common, since we were both born in Germany, come from middle-class families and have enjoyed an excellent education, as well as all the privileges that come from growing up in Germany."

In recent years, she and Ashraf often discussed what they owe their parents and their native countries for all they have done for them. She notes however that "at the same time, we often felt alienated from our cultures and sought ways to get back to our roots."

According to the director, Sharkawy had the idea for the Freedom Bus shortly before Mubarak's resignation. In March 2013, he decided to drop everything and return to Egypt to put his idea into action. He wanted Abdollahyan to join him on his journey with the Freedom Bus and to document the project from start to finish.

Although Abdollahyan considers the Freedom Bus film project to have been an overall success, the struggle to educate people about democracy in Egypt was a bumpy ride. This is illustrated by a scene showing a heated dispute between two men about whether there could ever be such a thing as a liberal form of Islam. Conflicts arose again and again when visitors to the bus called into question the organisers' agenda and intentions – a sign of growing xenophobia in post-revolutionary Egypt.

"It was difficult for us as a film team to document the work of the Freedom Bus," says Abdollahyan. "At some point we had to stop shooting on location and send our camerawomen back. We then had to work with an Egyptian cameraman in order to overcome some difficulties. Sometimes visitors to the bus did not let us film, calling us 'Americans' and wondering what the film had to do with the actual Freedom Bus campaign."

"Some of their reactions make sense though," adds Abdollahyan. "After the revolution, the country was like an open wound – people didn't know who to trust and who to believe. So I understood their mistrust."

Despite many positive experiences during the Freedom Bus campaign and the fact that the film project was very successful, not enough information about the goals of the campaign was communicated either through the Egyptian news media or by the film itself. Although prominent politicians, such as Pakinam Sharkawy, Mohamed Morsi's assistant during his one-year term in office, or the liberal industrialist Ziad Ali, do make appearances in Abdollahyan's documentary, these cameos go without comment, raising questions as to the film's orientation and intentions.

Not an expanded form of journalism

Furthermore, the documentary offers little relevant background information on important political events that coincided with filming, such as the brutal clashes on Mohamed Mahmoud Street and the Maspero massacre in Cairo in the autumn of 2011.

Abdollahyan is known for her minimalist style. She deliberately avoids using background music and narrative in her films and lets only a few figures speak on film.

"I believe that documentaries can only arouse sympathy; they are not an extended form of journalism. After all, journalism deals only with facts. So if I manage to open up a space where I can have my own personal experience, and if I manage to move the viewer emotionally, then they will want to seek out the facts for themselves," she says.

"I would never make a film and claim that I'm an expert on that topic – my expertise lies in the point of view of my protagonists," she adds.

Sharkawy is still living in Egypt and trying to get a permit to go on a second tour with the Freedom Bus. That would be an excellent opportunity for Abdollahyan and Sharkawy to join forces again and to document possible changes that have taken place in Egyptian society since the beginning of the 2011 campaign.

Home
Print
Newsletter
More on this topic
The Democratic Process in Egypt: The Success of Democracy is Not a Question of EducationThe ''Tahrir Lounge'' in Cairo: Grassroots DemocracyRevolutionary Films in the Arab World: Taking Stock
Related Topics
Arab cinema, Democracy and civil society, Egypt Revolution 2011, Islam and democracy
All Topics

Two refugees detained in Egypt are facing deportation to Eritrea. The expulsion of the Eritreans, who have been incarcerated in Cairo for more than eight years, has been halted ... END_OF_DOCUMENT_TOKEN_TO_BE_REPLACED

International relations are shifting across the Middle East as regional powers adapt to America's retrenchment and China's growing influence. Although the region could become the ... END_OF_DOCUMENT_TOKEN_TO_BE_REPLACED

Germany's foreign policy is explicitly values-based. But what happens, Ralf Bosen asks, when democracy, the rule of law and human rights collide with the logic of trade and ... END_OF_DOCUMENT_TOKEN_TO_BE_REPLACED

"The people aren’t ready for democracy" has been the constitutional basis for Arab tyranny, its favourite slogan and its sacred narrative for more than a century. Yet, asks Khaled ... END_OF_DOCUMENT_TOKEN_TO_BE_REPLACED

A new global database shows a significant gap in reported COVID-related deaths, suggesting the actual worldwide death toll is short by at least 1 million. That's due in part to ... END_OF_DOCUMENT_TOKEN_TO_BE_REPLACED

Two decades after the attacks of 11 September 2001, the West faces the shattered debris of its failure – not only in Afghanistan, but also in Iraq, Syria, Libya and Yemen. What ... END_OF_DOCUMENT_TOKEN_TO_BE_REPLACED
Author:
Maha El Nabawi
Date:
Mail:
Send via mail

END_OF_DOCUMENT_TOKEN_TO_BE_REPLACED
Social media
and networks
Subscribe to our
newsletter