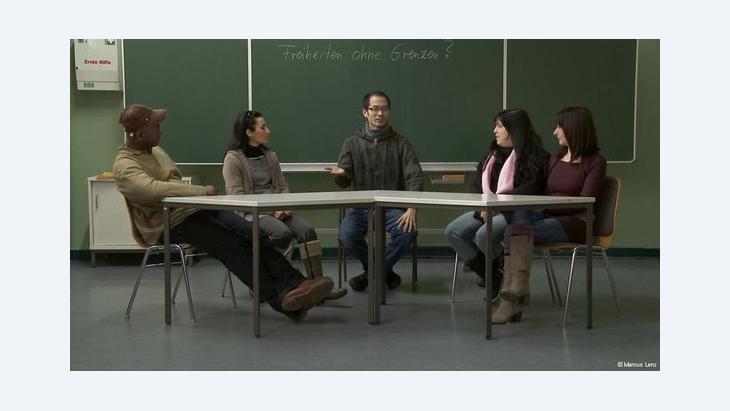 Documentary on Integration Courses in Germany

How to Become a German

Is it possible to learn integration? Germany thinks so. Since 2005, special courses have been helping immigrants become familiar with German language and culture. But do they really work? A Berlin film-maker wanted to find out. Melanie Lachner watched the resulting documentary

Insaf Azzam furrows her brow as she stares at her exercise book. "Is the cleaning job still available?" she reads in broken German. Job search role-playing is part of the curriculum here. Azzam, who was born in Syria and wears a headscarf, is taking part in an integration course in Berlin, together with 20 other immigrants from Bangladesh, Argentina and Eastern Europe.

Film director Britt Beyer has been following a course like this one for the past ten months. The resulting documentary film entitled Werden Sie Deutscher (How to Become a German) offers rare insights into the practical side of Germany's immigration policy. "I thought it was going to be a lot more difficult," she says, "but there was a great deal of openness." Although her film is full of comical situations, it does encourage critical debate.

In many cases, the people attending these integration courses have already been living in Germany for decades. They've put down roots here without ever really feeling at home. Just like Insaf Azzam, who came to Germany 20 years ago with her husband. Although they have been here a long time, the family has never felt really welcome. As a homemaker, Azzam has learned very little German over the years; she gets by speaking Arabic in her Berlin neighbourhood.

The family's residency permit has now been extended for two years instead of just for a few months like it used to be. Successful completion of the integration course was a condition for the extension. Insaf Azzam saw it as a chance to finally learn German. She no longer wants to feel like a foreigner in Germany and, for her, the course is a first step. For many participants, the pressure to pass the final exams is enormous. Those who fail could have their social benefits cut or, in the worst case scenario, could be deported. 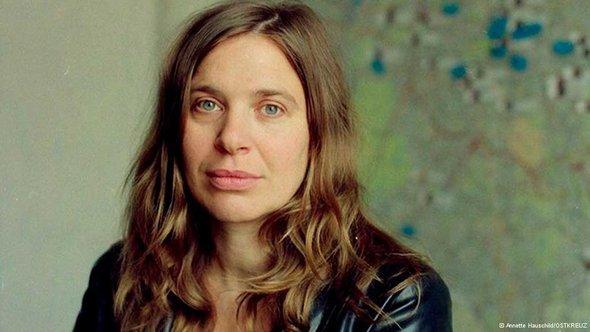 What makes someone a good German? Separating your rubbish? Being punctual and orderly? Film director Britt Beyer wanted to find out what immigrants who attend integration courses are taught. The result is her documentary "How to Become a German"

The basic idea of the integration courses is praiseworthy, and at just one euro per lesson, they are unbeatably cheap. Above all, however, with these courses, Germany is sending out a clear signal that immigrants are no longer seen as guests, but are recognised as valued members of society. "It took 50 years for someone to make them this offer," says director Britt Breyer.

That being said, the implementation of this long overdue measure is questionable. Orderliness, diligence and punctuality are described in the text books as desirable German traits, creating a picture of Germany that is entirely built on clichés.

For Beyer, it is "time to get rid of these stereotypes." She feels that the content of the course is evidence of an attempt to hold fast to a set of ideals that is as unrealistic as it is outdated. It sometimes seems as if there is a fear that a little bit of German identity is lost with the arrival of every immigrant even though such courses are an opportunity to promote cultural diversity in Germany.

At the end of the film, Insaf Azzam receives the result of her exam. She has passed! But does a boring old certificate make her part of Germany? Does she feel more integrated now after years of living in a parallel society? Not really. Germany, a self-declared country of immigration, continues to foster integration "in instalments".

The European Court of Justice has given its backing to companies that don't allow female Muslim staff members to wear headscarves – as long as they don't permit the wearing of ... END_OF_DOCUMENT_TOKEN_TO_BE_REPLACED

The disappearance of Razan Zeitouneh and her colleagues has been one of the greatest mysteries of the Syrian war – until today. DW's investigative unit hunted clues across six ... END_OF_DOCUMENT_TOKEN_TO_BE_REPLACED

Muslims in Europe regularly experience threats, witness attacks and are the target of hate across national borders. Now the Council of Europe, the continent's leading human rights ... END_OF_DOCUMENT_TOKEN_TO_BE_REPLACED

The West is pulling out of Afghanistan after 20 years, but the conflict remains – and the Taliban are stronger than they have been for a long time. And now? The renowned Taliban ... END_OF_DOCUMENT_TOKEN_TO_BE_REPLACED

United States and NATO troops are leaving Afghanistan after 20 years, despite the fact that the Taliban is still advancing. The German Bundeswehr is already out. Sandra Petersmann ... END_OF_DOCUMENT_TOKEN_TO_BE_REPLACED
Author:
Melanie Lachner
Date:
Mail:
Send via mail

END_OF_DOCUMENT_TOKEN_TO_BE_REPLACED
Social media
and networks
Subscribe to our
newsletter