Documentary series: "Paradises of the earth"
The time is now

Nadir Bouhmouch, director of the ground-breaking web documentary series ″Paradises of the earth″, talks about the inception of the project and the urgency of telling North African stories

A testimony to Morocco′s 2011 February 20th uprising, my first documentary film ″My Makhzen and Me″ began with a sequence which transported the viewer through a North Africa which had suddenly rebelled against dictatorship and social inequality. Naturally, this sequence began in Tunisia – the birthplace of our glorious revolutions. Little did I know that years later I would find myself filming ″Paradises of the Earth″ in Tunisia′s southern margins, the very places from which the 2011 revolutions began.

​Between then and now, many things have changed – and not just at the geopolitical level – but also on a personal, introspective level. Since then, I have taken time to reflect, to think, to find inspiration and to learn. This long process of reflection and growth in political consciousness ran in parallel with the political and economic changes in our region, the ebbs and flows between revolution and counter-revolution.

This documentary has therefore come at an appropriate time, it is a way for me to revisit 2011. Whereas my first documentary focused on my individual interaction with popular revolt in the urban centre, this one explores a dialectical relationship between different people, from different places and their collective interaction with the struggles on the margins. Whereas before I called for pity, now I call for solidarity. Whereas before I detached present from past, here I seek to express historical continuity as it is made by people and not individuals.

In many ways, 2017 has been a year of experimentation for me, a year where I try to apply the ideas which I have formed and the ideas which have inspired me over the last six years. This project is the second of three experiments I have conducted this year. One in which I am seeking ideological harmony between the modes of production I employ, the themes I choose to focus on, the filmic and artistic forms I use to express these themes and the mediums of distribution and exhibition by which the final filmic product reaches its audience. 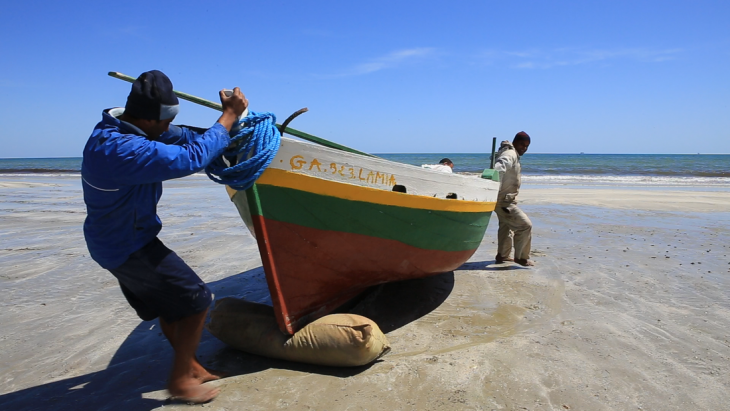 A process of personal development: "whereas my first documentary focused on my individual interaction with popular revolt in the urban centre, this one explores a dialectical relationship between different people, from different places and their collective interaction with the struggles on the margins. Whereas before I called for pity, now I call for solidarity. Whereas before I detached present from past, here I seek to express historical continuity as it is made by people and not individuals," writes Bouhmouch

Like all experiments, this one has had its successes and shortcomings. It has successfully managed to involve some of the film′s subjects as producers, empowering those in front of the camera to have a say in how they are being portrayed. It has also been successful in making itself accessible and independent of states, corporations and elitist film institutions. Another of its successes lies in its emphasis on internationalism and border-defying solidarity.

This is not only true for its choice of subjects who come from all over the region, but also for its production team. It is a North African production par excellence, refusing the usual absurd national labels accorded to films and embracing a borderless and de-colonial vision of North Africa. As for its shortcomings, I will write more about these later when they become more apparent, but what is certain for now is that we did not do enough to give more voice to women.

Tourists have been returning to Tunisia, Egypt and Morocco. But, given the global uncertainty caused by the Ukraine war, will the comeback be enough to save a struggling sector, ... END_OF_DOCUMENT_TOKEN_TO_BE_REPLACED

By 2050, the Middle East and North Africa could be dealing with many more elderly people suffering from dementia. A lack of facilities, specialists and local knowledge means the ... END_OF_DOCUMENT_TOKEN_TO_BE_REPLACED

Tunisians are set to vote on a new constitution on 25 July. The prominent lawyer and women's rights activist Yosra Frawes fears the referendum could facilitate a return to ... END_OF_DOCUMENT_TOKEN_TO_BE_REPLACED

END_OF_DOCUMENT_TOKEN_TO_BE_REPLACED
Social media
and networks
Subscribe to our
newsletter