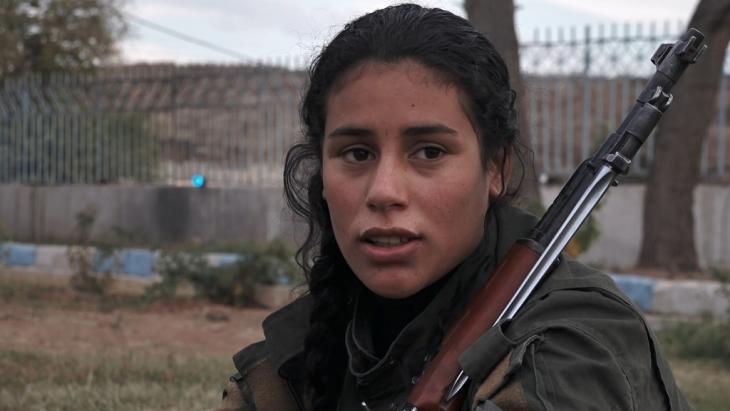 The documentary "The Other Side of the River" shows how women in the Kurdish regions of northern Syria fight for their rights under the most difficult conditions. By Aviva Freudmann

The personal is political – and vice versa. Nowhere is this connection more evident than in war-torn north-eastern Syria. On a political level, there are still sporadic outbreaks of violence here. Government troops, the extremist Islamic State (IS), Kurdish and Arab insurgents, and various international armies are fighting for their influence in the region. The Kurdish-led Syrian Democratic Forces have established their Autonomous Administration of Northeast Syria in this region.

Meanwhile, on a personal level, some young women are becoming aware of the entrenched patriarchal norms that keep them powerless. These women, though few in number, are rebelling against oppression. At the same time, they are fighting for more grassroots democracy.

This juxtaposition of the personal and the political drew German filmmaker Antonia Kilian to north-eastern Syria in 2016. Her original destination, the town of Manbij, is one of the areas under the control of the Syrian Democratic Forces, but was still contested. At the time, the Kurdish militias were in the process of driving IS out of the city.

As the city was too dangerous for filming at that time, Kilian was referred to a police academy for women on the other side of the Euphrates River, about 30 kilometres away. There she met 19-year-old Hala Mostafa, who had fled Manbij to escape her father’s plan to marry her off to an IS fighter.

Policewomen should protect women from violence

The documentary, based on a year of filming, tells the story of Hala’s experiences during her training on “the other side of the river” and her eventual posting to Manbij. Her job as a police officer is to protect women from violence in a Kurdish Women's Protection Unit. The film shows her growing resolve to support self-determination for women in general and for her own nine younger sisters in particular.

The young women's training at the academy includes physical drills and lessons on the rationale for their future police work. Both trainers and trainees share their experiences, and they do not mince words. One tells the harrowing story of a woman stoned to death by her own family and neighbours. Another warns that men use women sexually: “A man is interested in that one night to satisfy his lust; after that night he would open the door and kick you out, if he could.” A third says, “Marriage is an instrument for suffocating women, and women are supposed to just believe it is their destiny.”

Hala absorbs these lessons and is strengthened by them. In a personal victory, she persuades her sister Sosan to join her at the academy, against their father’s strenuous objections. This works out well for the sisters, at least for a while.

But eventually Sosan buckles under the paternal pressure. The father, who may have ties to the IS, tells Sosan that if she returns and agrees to an arranged marriage, she can erase “the dishonour that Hala has brought on the family”. Sosan obliges and is married off to a man of her father’s choosing. 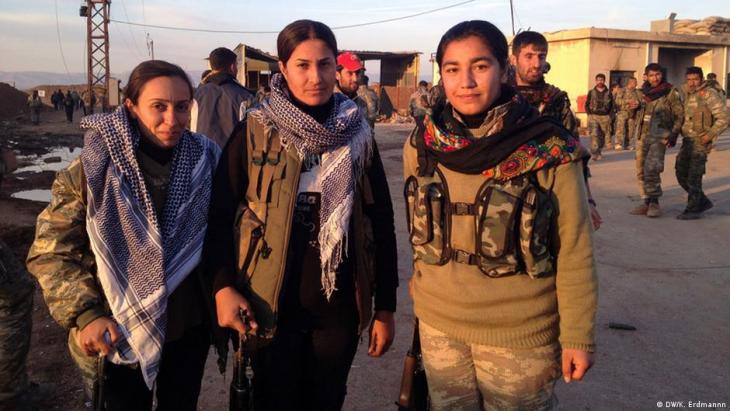 Female fighters belonging to the Kurdish YPG militia in northern Syria: the documentary film "The Other Side of the River" by Antonia Kilian is also set in the Autonomous Administration of North-East Syria and is about the difficult attempt of a young woman to free herself from male paternalism

The patriarchy strikes back

A scene just before Sosan’s wedding shows how patriarchy maintains control. Sosan sits in the small family courtyard in all her wedding finery, surrounded by her younger sisters. A young man, ostensibly an IS fighter, bursts in, shoots his rifle several times in the air and delivers this message: “Tell Hala her father says he can take care of her with one bullet.”

Hala, however, is undeterred. She continues her police work in Manbij. However, she is so upset by Sosan’s decision and so determined to save her other sisters from a similar fate, that she does something illegal and hot-headed: she tries to extract her younger sisters from the family home by force. This, naturally, lands her in trouble with the police, who are also her employers. Hala spends a few days in jail, and it is not clear what impact her actions will have on her policing job.

In their police work, the recruits try to bring the message of emancipation to civilian women as well. In one scene, a woman fleeing domestic violence seeks help from the police and receives it. That is one of the connections the film makes between the personal and the political. The subtitle of the film says it all: “No women, no revolution”.

Home
Print
Newsletter
More on this topic
Kurdish autonomy in northeast Syria: Between Assad and ErdoganJoey Lawrenceʹs "We came from fire": A tribute to the KurdsFilmmaker Mariam Ghani: The power of propaganda
Related Topics
'Islamic State' | IS, Assad regime, Gender, Human rights, Kurds, Muslim women, Sexism and violence against women, Women in the Islamic world
All Topics

A lot is happening in Syria’s Sweida Governorate – foreign intervention there is unprecedented both in terms of scale and number of actors – yet Damascus remains the dominant ... END_OF_DOCUMENT_TOKEN_TO_BE_REPLACED

When she ascended the throne, millions of Muslims still lived under British rule. Later, Elizabeth II appealed for tolerance in a multi-religious society. She was the first ... END_OF_DOCUMENT_TOKEN_TO_BE_REPLACED

Following months spent considering a military incursion into northern Syria, Turkey now appears to want talks with Syria to ensure security and the return of refugees. From ... END_OF_DOCUMENT_TOKEN_TO_BE_REPLACED

In this essay, renowned Lebanese journalist and writer Hazem Saghieh asks whether the Arab Levant, which stretches from Iraq in the east to Egypt in the west, will remain an ... END_OF_DOCUMENT_TOKEN_TO_BE_REPLACED

Since Ali Khamenei, Iran's most powerful man, has openly and unconditionally come out in support of Putin's war in Ukraine, logistical help is on its way, with an allegedly ... END_OF_DOCUMENT_TOKEN_TO_BE_REPLACED
Author:
Aviva Freudmann
Date:
Mail:
Send via mail

END_OF_DOCUMENT_TOKEN_TO_BE_REPLACED
Social media
and networks
Subscribe to our
newsletter