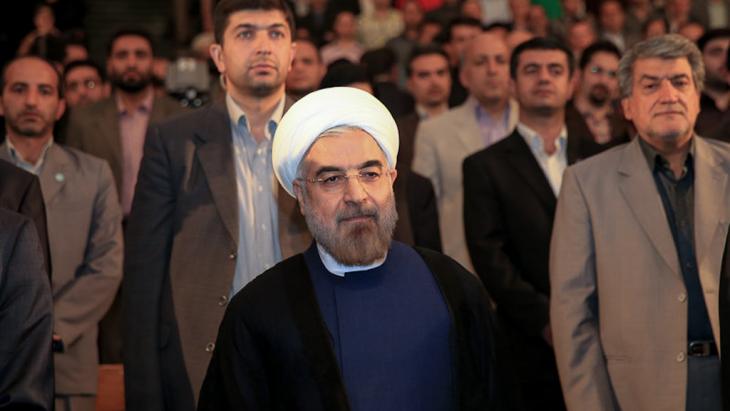 Iran's conservatives – whose representatives were defeated by Hassan Rouhani in the presidential election earlier this year – have maintained their grip on power in important areas of state such as the judiciary, the armed forces, the Revolutionary Guard and the security forces. Because the liberal Rouhani does not want to wage war on two fronts, it is inevitable that he will disappoint his supporters. A commentary by Rudolph Chimelli

Iranian President Hassan Rouhani does not want to wage war on two fronts. In his first one hundred days in office, he concentrated fully on improving the relations between his country and the West. After all, the country's staggering economic problems can only be solved by the lifting of sanctions and the resolution of the dispute about Iran's nuclear programme. The president is avoiding any additional resistance to his policy from the ultra-conservatives by putting off the domestic liberalisation of Iran, even though he is dashing the hopes of many of his supporters by doing so.

Whether he is postponing such reform or whether things will remain as they are indefinitely is hard to say. The conservative forces, whose representatives were defeated by Rouhani in the presidential election, have maintained their grip on important areas of state such as the judiciary, the armed forces, the Revolutionary Guard and the security forces. 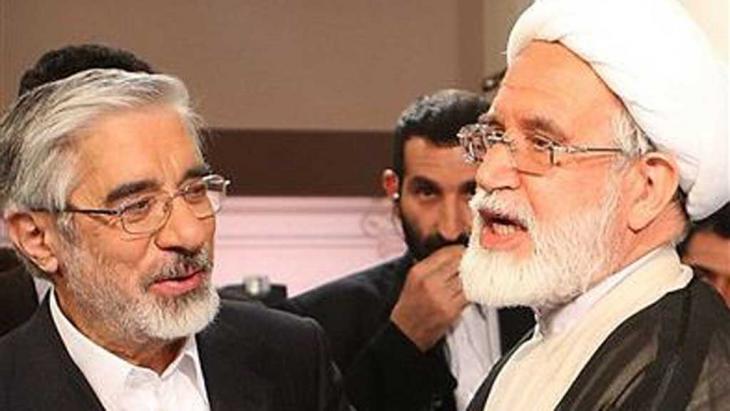 Silenced opposition: over 100 political prisoners are currently being held in Iran, among them the two opposition leaders Mir Hossein Mousavi (left) and Mehdi Karroubi. All of them accused Mahmoud Ahmadinejad of electoral fraud four years ago and refused to recognise his re-election as president

It is the former Interior Minister Abdallah Nouri, who was sentenced to five years in prison for speaking his mind while still a member of the government, who has been most outspoken in his criticism of the current situation. Nouri visited the family of presidential candidate Mehdi Karroubi, who is under house arrest, and reminded Rouhani that he had been elected because Iranians were fed up with lawlessness, civil rights violations and "narrow-mindedness" in the Islamic Republic.

Ayatollah Ali Mohammed Dastgheib, who is held in high regard by the opposition and is a member of the Assembly of Experts, which elects the Supreme Leader of Iran, has made similar statements. Dastgheib reprimanded Rouhani for saying nothing when the daughters of presidential candidate Mir Hossein Mousavi, who is also under house arrest, were mistreated by a female guard when they went to visit their father.

"The reason we cast our votes the way we did was so that you would try to release all political prisoners and, in particular, to release Mousavi and Karroubi from house arrest," said the ayatollah. However, very few prisoners have been released so far.

It came as a shock to people in Iran that a newspaper was banned at the end of the month. It was the first time such a step had been taken since Rouhani came to power. On the occasion of Eid al-Ghadeer, the day on which Shias celebrate Muhammad's appointment of Ali as his successor, the pro-reform newspaper Bahar discussed whether Ali, one of the Shias' favourite historical figures, was more a religious or a secular leader. 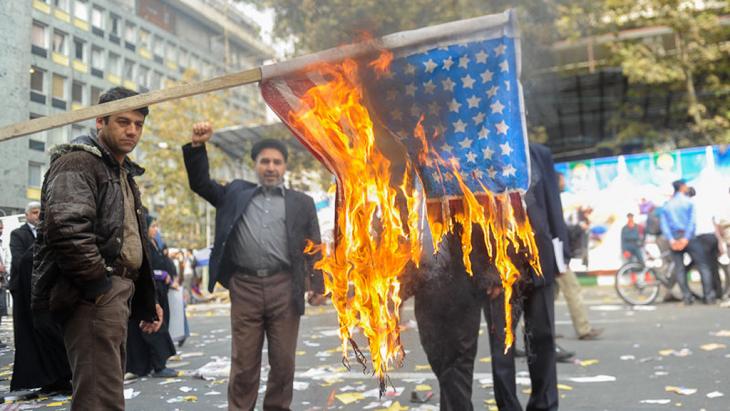 Annual ideological ritual: to mark the 34th anniversary of the storming of the American Embassy in Tehran, several thousand Iranians demonstrated against the United States on 4 November

Despite issuing an apology for publishing the article, the editor-in-chief of the newspaper spent several days in prison. The cultural minister, who is considered a liberal, accused the newspaper of having fuelled religious conflicts. The judiciary issued a statement saying that every newspaper that adopts unacceptable political viewpoints could be punished by either a temporary or permanent ban. Anyone who had hoped for an easing of restrictions after the pledges made by Rouhani in the run-up to the election are sure to have received the message loud and clear.

Iranian journalists' hopes that they would be able to re-activate their professional association have also been dashed for the moment. The journalists' association was closed four years ago. Gholam-Resa Edschei, spokesperson for the judiciary, announced that the association would remain closed. About 20 Iranian journalists are currently in prison; most of them have been there since the controversial presidential election of 2009. The three journalists who were recently released from prison had completed their prison sentences.

The hardliners did not have to forgo their usual battle cry of "Death to America!" on the 34th anniversary of the storming of the American Embassy in Tehran. This time, they used it to show Rouhani the boundaries of his influence. 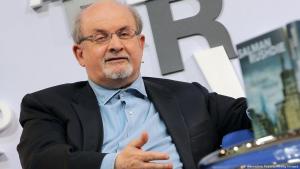 The shocking knife attack on author Salman Rushdie has fanned interest in his works – above all, "The Satanic Verses", which left him living for years under a looming death threat. END_OF_DOCUMENT_TOKEN_TO_BE_REPLACED

Since Ali Khamenei, Iran's most powerful man, has openly and unconditionally come out in support of Putin's war in Ukraine, logistical help is on its way, with an allegedly ... END_OF_DOCUMENT_TOKEN_TO_BE_REPLACED

A sci-fi film lampooning the Islamic Republic and all that its regime holds sacred premiered quietly at a nondescript venue in Los Angeles in July. The title, “Velayatnameh”, is a ... END_OF_DOCUMENT_TOKEN_TO_BE_REPLACED

The Palestinian militant organisation Hamas, with Hezbollah's help, is building up a military presence in Lebanon, the ultimate consequences of which could be devastating, writes ... END_OF_DOCUMENT_TOKEN_TO_BE_REPLACED

With his fist bump greeting for a man he previously called a pariah, US President Biden has paved the way for Saudi Crown Prince Mohammed bin Salman's return to the international ... END_OF_DOCUMENT_TOKEN_TO_BE_REPLACED
Author:
Rudolph Chimelli
Date:
Mail:
Send via mail

END_OF_DOCUMENT_TOKEN_TO_BE_REPLACED
Social media
and networks
Subscribe to our
newsletter