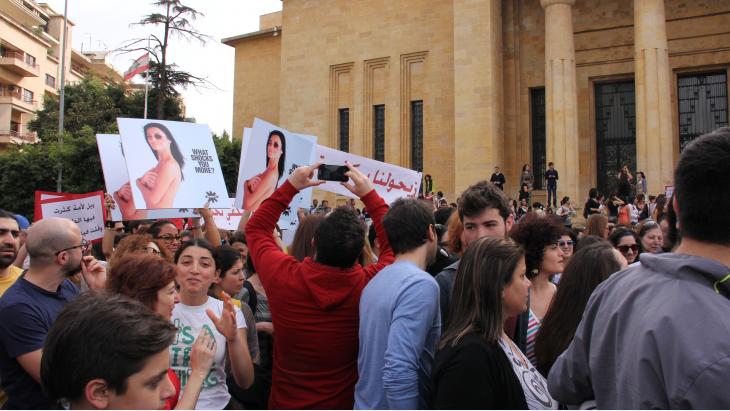 Domestic violence against women in Lebanon
Protection, yes, but not enough

On 1 April, the Lebanese parliament approved a law designed to curb domestic violence. However, the women's rights organisation KAFA, which ran a high-profile campaign demanding a law to protect women against domestic violence, is disappointed with the outcome and says the law does not go far enough. Background information from Juliane Metzker in Beirut

Tala and Sara were forced to watch as their raging father bludgeoned their mother with a pressure cooker. A marital dispute turned into a struggle for life or death. Manal al-Assi succumbed to her injuries 12 hours later in a Beirut hospital.

Fatima al-Nashar from Tripoli was pregnant when she lost the voucher for the next water delivery. Furious about the loss, her husband, his brother and her mother-in-law ambushed her and beat her. Fatima and her unborn child only survived the attack by a hair's breadth. Prior to the assault, she had made repeated complaints to the police about her violent husband. But the police did not get involved, regarding both of these cases as family matters.

Sadly, tragic events such as these are not exceptional in Lebanon.

For several years now, KAFA ("Enough"), a Lebanese civil society organisation, has been demanding a law that protects women from domestic violence. In co-operation with 60 other NGOs, KAFA prepared a draft bill which the Lebanese parliament handed over to a committee last year for revision.

Several religious dignitaries and politicians criticised the parliament's decision to even consider such a bill. "They fear a domino effect. They know that this law may lead to dramatic changes in Lebanon's confessional society," explains Abbani. Confessionalism is the Lebanese system which sees government posts and the seats in parliament allocated among the country's religious communities.

Although Lebanon is deemed one of the Arab world's most liberal countries, when it comes to civil rights, women are still at a disadvantage compared to men. For example, Lebanese women are not able to transfer their citizenship to their children if the father of the children is foreign.

"If a law is passed specifically for women, then one day this citizenship law could also be overturned, as well as many others," says Abbani, adding: "Equal rights for women present a threat to Lebanon's system of confessionalism. Many women would immediately divorce their violent husbands if they were protected by law."

KAFA also called for a government fund that would make grants available to women who are financially dependent on their husbands, especially women who have recently been through a divorce. These grants could only be requested, though, if the law applied to women only.

For International Women's Day on 8 March, KAFA organised a mass demonstration in Beirut under the slogan: "If we must protest to pass this law, we will!" According to the organisation, some 5,000 people marched from the National Museum to the Palace of Justice.

"I am here because there have been cases of domestic violence in my family too," said a 21-year-old protester. "My mother was able to leave my father just in time before he killed her. I remember that we informed the police several times about his violent outbursts, but they always told us that it was not their duty to intervene in such cases."

Progress in a number of areas

In this respect, thankfully, any refusal on the part of the Lebanese security forces to provide assistance in cases of suspected domestic violence was made punishable in the middle of 2013. Moreover, the Internal Security Forces (ISF) have enlisted KAFA as monitoring body.

In co-operation with ISF, KAFA now educates police on how to deal with victims of domestic and sexual violence. A seminar on gender-specific violence has already been introduced into the Lebanese police academy's syllabus. In November 2013, security forces launched a large-scale campaign, handing out fliers with the heading "We have a mission" encouraging women to dial the emergency number 112 if they felt threatened. 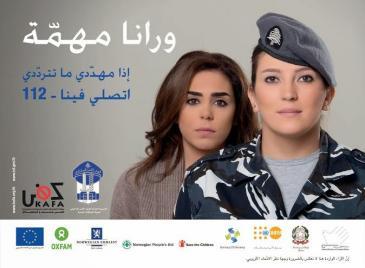 Although Lebanon is often considered one of the most liberal countries in the Arab world, it lags behind many countries in the region in terms of women's civil rights. In November 2013, the Lebanese security forces launched a large-scale campaign, handing out KAFA fliers encouraging women to dial the emergency number 112 if they felt threatened

KAFA considered the campaign a great success; since the fliers were distributed, the police have put over 100 women in touch with the organisation. This number continues to increase, reports Abbani: "We are getting more and more calls. KAFA is currently supporting between 300 and 500 women. But I am sure that there are many more women out there who should pluck up the courage to take this step."

In March, the women's rights activist seemed confident that the law would be introduced with their proposed amendments: "The majority of members of parliament are in favour of the bill in principle, and they would vote for it." As it was, the bill that was passed on 1 April was a watered down version of the one activists had hoped to see, providing only limited protection for women.

So what happened? The new government under Prime Minister Tammam Salam was deeply divided on a number of issues, which meant that it was in deadlock and unable to begin its work for approximately a year. Once the deadlock was broken, Parliament passed the law swiftly, albeit without the amendments demanded by activists.

There was much disappointment among campaigners. Although the law makes provisions for restraining orders against violent family members, the definition of domestic violence is too narrow and doesn't include the criminalisation of marital rape.

The parliamentary committee also modified the original bill, changing the title to "Law for the protection of women and family members from domestic violence". This means that children and men would also be protected under this law.

Abbani disapproved of this decision: "It may appear like a good idea at first. However, violence against women is a highly special case that requires specialised protection mechanisms." In this context, Abbani points out that children are already protected by Act 442 and that men have the final word anyway in matters of divorce, inheritance and custody.

In short, Lebanon may have passed a new anti-domestic violence law, but there is still much for KAFA and similar organisations to do.

Home
Print
Newsletter
More on this topic
The Uprising of Women in the Arab World: Fighting Patriarchal Tyranny"Women's Power in Arabic": Long-overdue ConfrontationsWomen in Morocco: Rape victims no longer forced to marry their aggressors
Related Topics
Gender, Hezbollah, Muslim women, Sexism and violence against women, Women in the Islamic world
All Topics

November 2022 sees the Arab world firmly in the spotlight with the COP27 in Egypt and the FIFA World Cup in Qatar. Public trust in MENA governments is weak, thanks to their ... END_OF_DOCUMENT_TOKEN_TO_BE_REPLACED

"You are not my guide... I am the compass. Iranian women have spoken, freed themselves, and unleashed a revolution despite smelling death. They have cut their braids in anger; ... END_OF_DOCUMENT_TOKEN_TO_BE_REPLACED

In “The Wrong End of the Telescope”, Rabih Alameddine draws us away from the headlines and into the personal story of one individual. Mina is complex, compelling and very real. By ... END_OF_DOCUMENT_TOKEN_TO_BE_REPLACED

How are comic book artists in the Arab world responding to the political situation in the region? Lena Bopp talks to illustrators Lina Ghaibeh and George Khoudry about young ... END_OF_DOCUMENT_TOKEN_TO_BE_REPLACED

The clashes in Baghdad between supporters of Muqtada al-Sadr and pro-Iranian militias show that an intra-Shia power struggle is in full swing. An analysis from Cairo by Karim El- ... END_OF_DOCUMENT_TOKEN_TO_BE_REPLACED

Comments for this article: Protection, yes, but not enough

The new law still needs adjustments. The date of the detention should not determine the fate of the victim.

END_OF_DOCUMENT_TOKEN_TO_BE_REPLACED
Social media
and networks
Subscribe to our
newsletter