Since the war in January 2009, Domestic violence against women in the Gaza Strip has markedly increased. The strict rule by Hamas has only worsened the situation. Yet, with the assistance of NGO initiatives, afflicted women can once again experience hope. Ruth Kinet reports 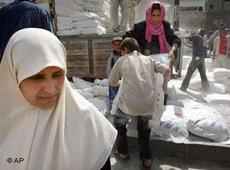 Women as victims of military conflict. During the last war, many families in the Gaza Strip have broken up and sexual violence against women has increased, reports an NGO representative in Gaza

​​ Wafa (name changed by the editors) is 55-years-old. She covers her body with a black veil. It has been six months since her divorce. Finally – after enduring more than 30 years of marriage and innumerable violent outbursts from her husband.

Wafa has six children, five sons and one daughter. She had to wait a long time for the divorce. Medical statements were required. She had to file charges against her husband with the police. Now, she is a divorced woman without her own home. She sleeps in the hallway of a one-room apartment in Gaza City, in which her oldest son, his wife, and their children live.

Wafa doesn't complain about her fate. "This is the lot that God assigned to me," she says. But when she tells of the darkest hours of her life, her eyes fill up with tears and her chin trembles. She tries to remain strong and not give in to the pain. She's had lots of practice.

Torment to the point of torture

"Once my husband threw me on the bed, poured kerosene all over, set it on fire, and locked the bedroom door," recalls Wafa. "I screamed for my very life. The neighbours heard me and rescued me." Her husband once broke her arm. He even tormented the children, sometimes to the point of torture.

As their daughter was seven, for instance, he seared her hands with a piece of red-hot iron. He often threw his children out on to the street naked in winter. "He is sick," says Wafa soberly. "He suffers from a hyperactive brain." Yet, he wouldn't submit to medical treatment. Wafa quietly endured all of this for the sake of her children. She never said a word. She didn't want her children to suffer a bad reputation. 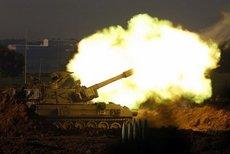 Violence breeds more violence: according to Palestinian sources, more than 1400 Palestinians were killed and a further 5500 wounded during the war in Gaza between the end of December 2008 and mid-January 2009

​​ Today, Wafa sits in the office of Ola Hassaballa, a psychologically trained worker with the NGO called Palestinian Working Women Society for Development, PWWSD for short. Encouraged by Ola Hassaballa, Wafa has begun to talk about her traumatic experiences. "This has really helped me," she says. "I now feel that there are still good people in the world and this gives me hope."

The PWWSD has six help and information centres in the Gaza Strip, providing places of refuge for women who are victims of domestic violence. Over a period of three months, every woman receives a private session with a therapist. Even after the therapy phase is concluded, the PWWSD psychologists maintain contact with their clients and follow their further development. This work is financed to a significant extent by cdf, a Swiss feminist peace organization.

Domestic violence as a consequence of war

Hysteria, depression, and schizophrenic behaviour – these are the most frequent diagnoses for women who have been the victims of domestic violence, says Hassaballa. For the last year, in particular, the services of the centres have been increasingly in demand. Ola Hassaballa ascribes this to the war of January 2009.

"The women are under a great deal of stress. During the war, many families have broken up. In particular, sexual violence has markedly increased during the war. This is especially the case for families whose houses were destroyed and then were forced to live in tents lacking any kind of private sphere."

Talking freely in a safe space

Deir al Balah is located 20 kilometres southwest of Gaza City. In a ruined building directly next to a bombed-out lot from the last war, twelve women in black veils sit on uncomfortable metal chairs in an austere room with bare walls. The room belongs to the local office of PARC (Palestinian Agricultural Relief Committee), an NGO founded 27 years ago to promote development in rural areas and, in particular, to support local women. 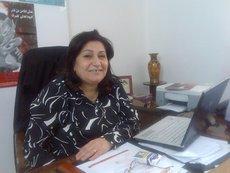 "Every woman exposed to domestic violence can apply for divorce. But in practice, the judges tend to prologue the process," reports the lawyer El Ghunaimi

​​ Najàd (name changed by the editors) meets with the other women every day at PARC. She speaks unreservedly about what took place in her marriage. She knows that she is safe in this room. "My husband beat me with an electric cable. At first, I endured it and was patient. Then, one night, he abused me with electric shocks. I fled after that."

Najàd has been divorced now for two years. In the 23 yeas she was married, she bore ten children. Her oldest son is 22 and her youngest daughter is three. Her husband married one of his relatives even before the divorce and threw his first wife Najàd out of their common home. Since then, she has been homeless.

The strict rule of Hamas

Because she doesn't have her own home, Najàd is not allowed to keep her four youngest children, who are all younger than nine. And she isn't even permitted to see her older children either. This is in accordance with Sharia law, which rules over all domestic affairs in the Gaza Strip. When a couple divorce, the father is given custody of any children younger than nine. The age limit used to be 15. Since Hamas assumed power, the age was reduced to nine, explains Islah Hassania.

Hassania is a lawyer and she defends women before the religious court. She works closely with Zainab El Ghunaimi, another woman lawyer. She directs a legal consultation centre for women, which, in part, receives support from the Heinrich Böll Foundation and the Global Fund for Women.

Every woman exposed to domestic violence can apply for divorce, says El Ghunaimi. But in practice, the judges tend to prolong the process. The procedures are bureaucratic and complicated, she says. Many women have to wait 15 years for their divorce.

"In order for the court to acknowledge that a woman has suffered violence, she has to have been severely beaten. She must offer proof through medical statements and also has to file charges against her husband with the police. And sometimes even this is not enough."

There is no safe refuge in the Gaza Strip for women during the divorce process. To date, it has proved impossible to establish a women's refuge.

"He has the right to beat me"

​​ Violence by husbands against their wives is socially acceptable, complains Reem Al Nairab. She coordinates a programme for the Woman's Affairs Center (WAC) in Gaza City to promote economic independence for women through interest-free micro credit. Al Nairab has frequently heard men say that a woman is like a carpet. The more it is beaten, the cleaner it gets.

"It is incredibly difficult to get such ideas out of people's heads," says Reem Al Nairab. "Many women say, 'My husband has the right to beat me. I am the one at fault when he beats me.' And here they cite the Koran."

In Verse 34 of the fourth Sura, men are granted full responsibility and authority over their wives. Women must be submissive and obedient. When they fail in these duties, they should be admonished, be expelled from the marital bed, and, finally, be beaten.

Economic independence is the first step

Reem Al Nairab and her colleagues from the women's centre work against this religiously legitimized oppression of women. Frequently, women speak there for the first time about their violent husbands and they hear about the universality of human rights as well as the equality of the sexes. In video courses, they are shown how to document their violent experiences on film. The final stage, however, concerns the establishment of an independent existence, says Reem Al Nairab.

"When a woman stands on her own two feet economically, she is also in the position to separate from her husband. Even a small business in embroidery or painted glass can be enough for a 'no' to their husbands and a 'yes' to divorce."

Economic independence, however, has been destroyed by war. For most in the Gaza Strip, left barren by the Israeli blockade, it is hardly more than a beautiful dream. But Najàd has since found the courage to dream. "I want a job, a small home, and I want to see my children again."

Interview with Amira Hass
Peace Process as an Empty Phrase
Amira Hass is the only Israeli journalist who shares the day-to-day lives of the Palestinians she writes about. In this interview, she talks about her new book (“Gaza”)and about the situation facing Palestinians who live in the occupied territories. Lennart Lehmann talked to her

END_OF_DOCUMENT_TOKEN_TO_BE_REPLACED
Social media
and networks
Subscribe to our
newsletter