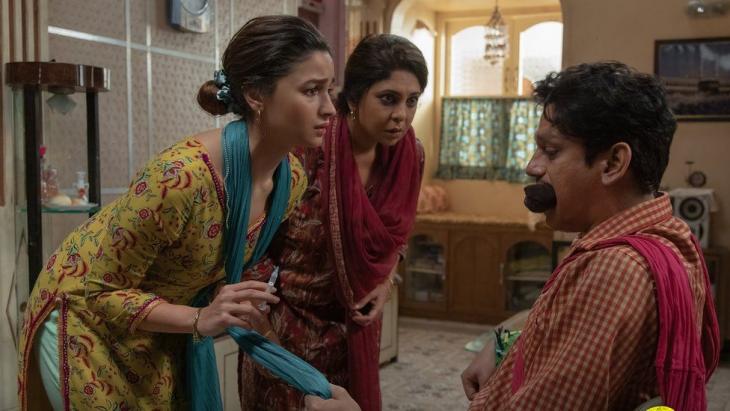 Domestic violence is no laughing matter, but a dark comedy streaming on Netflix on the topic is wowing audiences in India

Starring Bollywood actress Alia Bhatt, Shefali Shah and Vijay Varma in the lead roles, Darlings is the story of a young Muslim couple in love – and violence and revenge. The film opens with the lovers – Badrunissa (Bhatt) and Hamza (Varma) – deciding to get married, but theirs is not a happily-ever-after story.

Three years into the marriage, the couple have made a home in a lower middle-class housing tenement, but Badrunissa is sleeping with the enemy. He's the classic abuser, who batters her every night and says sorry in the morning. His justification for hitting – and her acceptance of it – is love. "Yes, I'm a bastard, but I hit you only because I love you," he says.

And she is a victim who lives in denial, believing that he'll come around if only she can make him stop drinking or if she has a child to cement their relationship.

But when the savagery continues and he finally crosses a line, rage takes over and halfway through the film, the tables are turned – the abused, with a lot of help from her mother Shamshunissa (played by Shefali Shah), becomes the abuser.

My last interview for #GulfNews is with #Bollywood's 'Little Miss Sunshine' @aliaa08 as she talks about her @NetflixIndia film #Darlings and why the film - which she also produces - shocked her at every turn #AliaBhatt (PS: they have fixed the typo) https://t.co/P06YepumXw

Home
Print
Newsletter
More on this topic
The "India Love Project" on Instagram: Fighting hate with loveAsma Jahangir, winner of the Right Livelihood Award: "Every restriction is based on religion"Qantara dossier: Sexism and violence against women
Related Topics
Cinema, Forced marriage, Islam in Southeast Asia, Muslim women, Sexism and violence against women, Women in the Islamic world
All Topics

COP27 in Sharm el-Sheikh is turning into a PR disaster for Egypt’s military regime. Instead of praise for the host, the news is full of solidarity for imprisoned activist Alaa ... END_OF_DOCUMENT_TOKEN_TO_BE_REPLACED

India is projected to see an explosion in its urban population in the coming decades, but its cities already cannot cope and climate change will make living conditions harsher ... END_OF_DOCUMENT_TOKEN_TO_BE_REPLACED

Indian Americans from diverse faith backgrounds have peacefully co-existed stateside for several decades. But events in the U.S. – and violent confrontations between some Hindus ... END_OF_DOCUMENT_TOKEN_TO_BE_REPLACED

Following the recent brutal attack on Salman Rushdie, famous writers have been reading passages from his works. Torsten Landsberg takes a look at the struggle in 1988 to publish " ... END_OF_DOCUMENT_TOKEN_TO_BE_REPLACED

The Biden administration could have used Pakistan’s economic crisis to compel the country to sever its longstanding ties to terrorist groups. Instead, the U.S. protects and ... END_OF_DOCUMENT_TOKEN_TO_BE_REPLACED

For some in India, the death of Queen Elizabeth II has provoked sympathies for a deeply respected figure, while for a few others, it jogged memories of a bloody history under the ... END_OF_DOCUMENT_TOKEN_TO_BE_REPLACED
Date:
Mail:
Send via mail

END_OF_DOCUMENT_TOKEN_TO_BE_REPLACED
Social media
and networks
Subscribe to our
newsletter