A Life Full of Holes

Driss ben Hamed Charhadi was an illiterate Moroccan servant and street vendor, Paul Bowles was a renowned American novelist and essayist. In 1964 they published "A Life Full of Holes" – a congenial project of literary cooperation. Richard Marcus reviewed the new edition of the book

​​ The legacy of American Paul Bowles (1910 – 1999) can be divided equally between his three major areas of interest: his writing, his musical compositions, and his translation and transcription of the work of Arabic writers of his adapted home, Morocco.

Unlike many ex-patriots from the West who settled in the Arab world only to isolate themselves from the people whose country they lived in, Bowles not only incorporated that world into his own writings and musical compositions, but also collaborated with local Maghrebi writers in translating their work and, in some cases, lent them his name in order to ensure their publication in the West.

While his most prolific relationship was with Mohammed Mrabet, who published a dozen books of stories between 1967 and 1986, his earliest collaboration has also proved to be one of the most enduring. A Life Full of Holes by Larbi Layachi – better know by the pen name Driss ben Hamed Charhadi – was first published in 1964 and has seen many new editions since then, including its most recent through Harper Collins.

A reader searching the Internet for information of either Larbi Layachi or his invented name of Driss, is going to draw pretty much a blank. The most you'll find is passing reference to the fact he eventually moved to America, published two other books, and the fact that he went by two names. We do know that he was born in 1937 and when he met Bowles in 1961 he was an illiterate street vendor.

Bowles himself never explains how the two men struck up a friendship, but Layachi was often a visitor to Bowles' house. It was during one evening visit that the idea for A Life Full of Holes was born, after a discussion during which Bowles had to explain how it was permissible to lie in a book. (At the time Arabs of limited education like Layachi thought of books only in terms of "The Book" the Koran, so the idea of fiction was alien to him.)

The intensity of Charhadi's eloquence

It wasn't until Bowles likened his novels to the stories that men told each other in the market place that Layachi understood the concept and that anybody could write a book, as long as they had a story to tell. 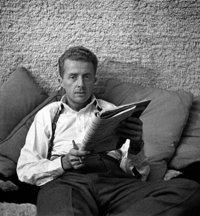 ​​ As Bowles tells in his introduction, they "wrote" A Life Full of Holes over the course of a series of evenings where Layachi would narrate his story into a tape recorder. Bowles was amazed at how his friend was able tell the story without pause, and only rarely needed to edit or correct any of what he had dictated. According to Bowles, "Charhadi never hesitated ... never varied the intensity of his eloquence."

A Life Full of Holes tells the story Ahmed Ben Said Haddari from his early childhood through adulthood as he struggles to survive. While poverty would be enough of a burden for a young child, Ahmed's life is compounded by his widowed mother's re-marriage. While life wasn't too bad as long as he was the only child, once his brother is born it becomes clear that his step-father doesn't have any use for him: "Unless he works to bring money into the house I see no reason to feed or clothe him."

Running afoul of the legal system

While that might have been a somewhat understandable attitude if expressed about a teenager who refuses to do nothing more than lounge about the house being waited on hand and foot, for a young child it's another story. So at an age when most of us were only concerned with attending school, Ahmed had already been sold into the equivalent of indentured slavery a couple of times over, as he never saw any of the money he made as his employers sent all the money directly to his step-father who never gave him a cent.

It's not surprising therefore that he soon falls into a life of crime. However even before he actually commits what is a criminal offence, we see how easy it is for an Arab to run afoul of the legal system as administered by the colonial masters in Morocco at the time. He and his mother are imprisoned while travelling to her father's village as they have no written proof that they indeed have relations in the village they're travelling to. Arabs were only allowed to travel within their own country with papers authorizing their movements or proof that they had some sort of family connection with their destination.

If, as it seems, Ahmed's life is fairly typical of that of any poor Arab of his generation, it goes a long way towards explaining where the resentment towards the West and their former colonial masters was born. Although the Nazarenes, as the poor Arabs call their Christian overlords, exist on such an exalted level and hardly ever directly impact upon Ahmed's or his friend's lives, they are a constant presence and the ultimate arbitrator of justice.

When Ahmed is caught selling hash, his jail sentence is dictated by the government's efforts to make people switch to smoking tobacco at the behest of European growers. The Nazarenes may leave the dirty work to their Arab underlings, but it's their hands pulling the strings that result in people like Ahmed being caught in the endless cycle of poverty and crime.

Magic and immediacy of oral story-telling

While the descriptions of Ahmed's deprivations and difficulties are disturbing enough, what gives A Life Full of Holes its real power is the immediacy that comes from it being told to you, instead of narrated in an impersonal third person.

While Charhadi electing to tell it from the point of view of his lead character helps create that impression, the fact that it is told completely in the present tense gives it an immediacy that's normally lacking in a written narrative. Each stage of Ahmed's life is recounted while he is living it, so we are experiencing it at the same time he does with none of the usual division between characters and readers.

Usually when a story is transcribed the tendency is to adapt it into a novel. That's not been the case here, and the result is quite unique. A Life Full of Holes is thus not only a powerful and slightly horrifying portrayal of life of the poorest of the poor in colonial Morocco in the 1960's, it's also a brilliant example of how it's possible to recreate the magic and immediacy of oral story-telling in writing.

END_OF_DOCUMENT_TOKEN_TO_BE_REPLACED
Social media
and networks
Subscribe to our
newsletter