Skip to main content
Dror Zahavi: "For My Father"

In his third feature film, the German-based Israeli director Dror Zahavi has broached a taboo subject: the protagonist is a Palestinian suicide bomber who falls in love with an Israeli woman. Following protests and calls to boycott screenings, the film has now been nominated for seven Israeli film awards. Stefan Franzen reports

​​ "Since I was born, I haven't even been allowed to dream," says the militant Palestinian activist to his young compatriot Tarek. "We don't have planes, so you're our plane." The explosive belt Tarek wears on his friend's instructions is packed full of nails, to sow the greatest possible destruction in the middle of a Tel Aviv marketplace. But the switch is defective, the bomb doesn't go off – and Tarek experiences 48 hours that change his life.

On his search for a replacement part for the killer detonator, he lands slap-bang in the middle of everyday Jewish life on the wrong side of the tracks. It's not the modern young Tel Aviv with its hip beach that interests Dror Zahavi. He has his protagonist Tarek (Shredi Jabarin) submerge into a scruffy side street, where the eccentric electronics dealer Katz (Shlomo Vishinsky) has his shop and the young and rebellious Keren (Hili Yalon) runs a kiosk next door.

A question of honour and guilt

In this shabby setting, the director weaves a romance on Shabbat, revealing just how similar the Jews and Palestinians are, burdened by notions of honour and guilt set in stone on both sides of the conflict.

The film's star Jabarin, an up-and-coming talent from Tel Aviv's Habima National Theatre, acts out his character's imprisonment in hopelessness with defiant melancholy. He brings instant credibility to the biography of a promising football star, who once played in Nazareth until he was refused entry. His father cooperates with the Israeli border troops in the hope of giving his son a chance at reaching his dreams. Tarek's task is to restore the family's honour – as a human bomb.

​​ Instead, however, Tarek saves the life of Katz's gloomy wife, hesitantly befriending the stubborn tradesman despite their initial distrust.

Katz seems to have an idea of what is going on inside the young Arab's head, eventually even letting him in on his own family's dark secret. He tells Tarek how his own son, a recruit to the Israeli army, fell victim to the perverse practice of "water discipline". We have to break the tragic cycle of violence, the old man seems to be telling him. In the course of events, Tarek takes the place of his son.

God's punishment for an immoral way of life

Keren is fighting on a different front: the young woman is under pressure from religious zealots after opting out of her ultra-orthodox family. They see the loss of her child as God's punishment for her immoral way of life. When Tarek steps in to protect her, the two of them are consumed by passionate emotions, and the more strongly Keren falls in love, the more intensively the actress Hili Yalon opens up into her role.

In the classic pattern, the drama's inevitability is an emotional corset laced tighter and tighter, perfectly captured by Zahavi's stifling direction and intensified by the ingenious and dynamic camerawork.

At close quarters, we see how political faultlines are reproduced in private lives, taking effect on individual destinies. The director and the scriptwriter, 21-year-old Ido Dror, have mastered the difficult art of avoiding either taking sides or taking pity, through their gripping composition. 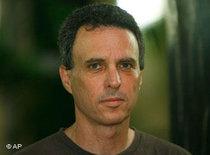 The Israeli director Dror Zahavi graduated from Potsdam Film School in the 1980s. "For My Father" is his first feature film

​​ Zahavi, a former student at the Babelsberg Film School outside Berlin with a background in the Israeli peace movement, is currently working on a film version of the biography of Germany's outspoken literary critic Marcel Reich-Ranicki. Through his very refusal to withdraw to the abstract level on the Middle East conflict, he has prompted strong reactions.

Israeli audiences criticised the film for showing a Palestinian mother crying for her son – they were unwilling to grant her emotions. Jabarin, the only Israeli actor who dared take on the role of a Palestinian suicide bomber after endless rounds of casting, was insulted on the street for "fouling the nest". The co-producer Zvi Spilman ("Schindler's List") reports that the dividing line between rejection and endorsement of the film ran right down the middle of Jabarin's family.

Despite all the critique, the German-Israeli co-production was in fact nominated for the Israeli Film Academy Awards in seven categories. And during filming, the criticism prompted understanding for the other side of the conflict right down to the lighting crew and drivers, said producer Heike Wiehle-Timm.

At the end of the film, children paste martyr posters onto walls – a banal ritual without the slightest shimmer of hope. Yet there is something that remains, a picture we're not familiar with from the daily news: a ring that Tarek made for Keren out of the nails in his bomb. His last greeting to the world is one of love.

Interview with Eytan Fox
Falling in Love with the Enemy
"The Bubble" is the story of three young Israelis in Tel Aviv, and a tragic love affair between one of them and a Palestinian. This Israeli film won the Panorama Award from the International Confederation of Art House Cinemas. Igal Avidan spoke with director Eytan Fox

END_OF_DOCUMENT_TOKEN_TO_BE_REPLACED
Social media
and networks
Subscribe to our
newsletter