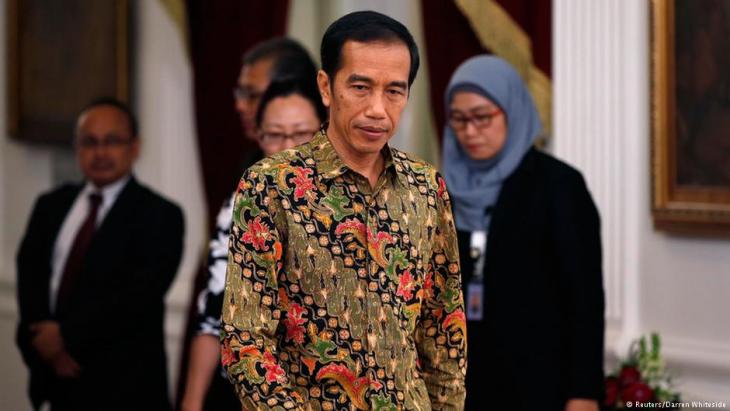 Anti-narcotics laws and their enforcement tend to be tough in Southeast Asia. In Indonesia, however, drug use is not in decline, despite attempts by President Widodo to crack down on durg dealers and cartels. By Edith Koesoemawiria

Be prepared. If you are planning a visit to Indonesia while still under treatment with narcotic-based medication, be sure to have an official medical statement from a doctor or hospital about your condition and an extra prescription. You may be questioned at customs about your medication. Without proof of its necessity, it may be seized.

Worse still, if the monitoring officers believe these "drugs" were intentionally hidden, you could be charged with smuggling. Having to face the law is not a happy way to start a vacation or business trip anywhere in the world. In Indonesia it could be particularly bad.

Illegal drugs, generically called "narkoba" in Indonesia, are considered a major problem. If convicted, smugglers, traffickers, dealers, manufacturers and even users of illegal drugs can be sanctioned to imprisonment between two to 20 years. Depending on the type and amount of narcotics, even capital punishment or life sentences are possible.

Only rarely are court rulings comparatively mild. Fidelis Arie Sudewarto received an eight month jail term and a fine worth € 60,000 for trying to grow cannabis because he wanted to allay the excruciating pain of his wife, a cancer patient. He benefitted from a massive show of support from the media and civil society. The fine was ultimately waived.

When it comes to defining "narkoba", the National Narcotics Agency (BNN) sticks closely to the English acronym NAPZA, which stands for narcotics, psychotropic and addictive substances. Besides natural substances like cannabis, cocaine, opiates and their derivatives, highly addictive synthetic drugs are covered too. They include pharmaceuticals like Valium and Mandrax, as well as party drugs like ecstasy. Even alcohol can be considered narkoba. Indonesia is a predominantly Muslim country, and Islam forbids the drinking of alcoholic beverages. 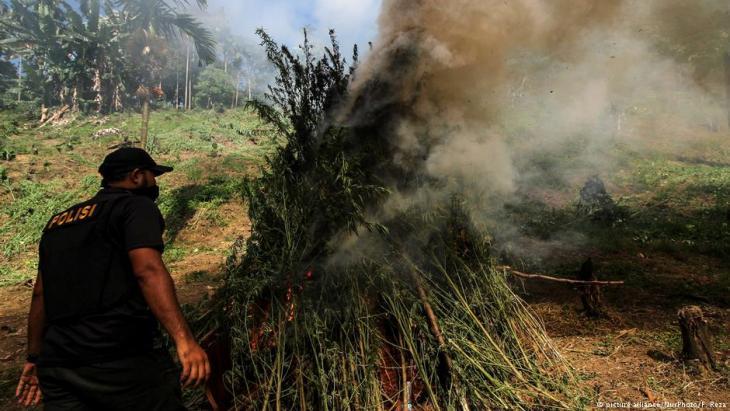 Impact of Widodoʹs "war on drugs" negligible: for unscrupulous crime syndicates, illegal drug cultivation and trafficking in Indonesia is a billion-dollar business. The gangs do not shy away from violence and go to extreme lengths to control the black market

Early on in his presidency, Indonesian President Joko Widodo called for a war against drugs in 2015, arguing that about 30 people die because of drug abuse every day. Ever since, drastic measures have included shooting smugglers, traffickers and manufacturers dead if they resist arrest. Warnings against illegal drugs are posted in public spaces and flit across TV screens during commercial breaks.

In 2015 and 2016, Indonesia executed 18 drug offenders. Some of them were foreign nationals. Indonesian and international human-rights organisations demand that the death penalty must be abolished, but so far, their calls have fallen on deaf ears. According to the BNN, there were almost 50,000 illegal drug cases in 2017, with 79 suspected drug dealers shot during arrest.

On the other hand, BNN statistics show that the number of drug offenders is not in decline. A BNN survey carried out in 13 provinces revealed that some 3.5 million Indonesians are drug users. This number amounts to 2.2 % of the people. According to the BNN data, 72 % of drug users are men.

One survey result was that about one third of the drug users try to quit their habit on their own, while others turn to private rehabilitation centres or hospitals.

Ill prepared for a life in freedom

Evy Harjono, the founder of "Second Chance", a civil-society organisation that supports prison inmates, sees poverty and population growth as major drivers of drug abuse. While the government is concentrating on building infrastructure to ease poverty in the long run, economic disparities will be acutely felt for many years to come.

"We must work at many levels," Harjono says. "There are currently not enough medical rehabilitation centres for drug addicts, so once they are sentenced, they end up in jail with dealers, manufacturers and other criminals." She insists that more rehab centres are needed for all addicts to be able to undergo medical and social rehabilitation, which is required by law. 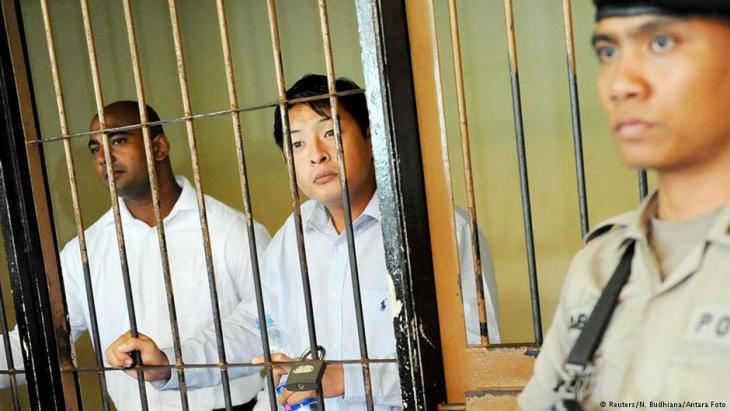 Draconian sentences for drug traffickers: in February 2015, several death sentences against foreign drug criminals caused diplomatic uproar. In addition to the Brazilian drug dealer Marco Moreira, Australians Andrew Chan and Myuran Sukumaran were also sentenced to death. The government and the judiciary in Jakarta justify their tough stance with the fact that Indonesia has developed into one of the world's largest markets for drug trafficking

According to Harjono, there are currently over 260,000 inmates in Indonesia’s 600 prisons, 482 correctional facilities and 118 detention centres. These institutions tend to be in miserable conditions and overcrowded. Harjono says the inmates are not being prepared for a life in freedom.

Many lack vocational skills. Most have spent whatever savings they had on lawyers. Released from detention, moreover, they will face stigma. The civil-society activist expects many to fall back into their drug habits, while some will be recruited into organised crime.

"Second Chance" currently works in 11 of Indonesia’s 34 provinces. The foundation offers inmates skills training – from basic literacy to handicrafts and theatre classes. The idea is to allow drug addicts to become self-sufficient. Starting in detention, they generate small incomes, and related savings are useful when they are set free.

The war on drugs is a challenge for Indonesia. The archipelago of more than 17,000 islands has many small and informal ports where smuggling is easy. Some 5,000 BNN officers are co-operating with the police and armed forces across the nation. The illegal drug trade is a multimillion-dollar business run by ruthless crime syndicates. The gangsters do not shy away from using violence. They do what they can to get control of the black narcotics market and exploit the addiction of vulnerable people. For hardened criminals the death penalty is no deterrent.

Confusing victims with perpetrators compounds the problem – and so does conflating highly addictive substances like heroin with comparatively harmless ones like cannabis. Indeed, cannabis was only made illegal by the Dutch colonial power in the early 20th century. Some people wonder to what extent the war on drugs is preventing harm – and to what extent it is actually causing suffering.

Edith Koesoemawiria is a freelance journalist based in Jakarta and Frankfurt.

Home
Print
Newsletter
More on this topic
Attempts to decriminalise hashish in the Arab world: To legalise or not to legaliseDrug trafficking in Tajikistan: Fighting a losing battleAfghanistan: Drugs problem deeply ingrained in society
Related Topics
Drugs, Economy, Joko Widodo
All Topics

Indonesia has become a primary battleground between democratic and autocratic visions of Islam in the 21st century, with Nahdlatul Ulama pitted against Abdullah bin Bayyah, a ... END_OF_DOCUMENT_TOKEN_TO_BE_REPLACED

Research project "The Global Qur'an", brainchild of Professor of Islamic Studies Johanna Pink and sponsored by the European Research Council, analyses the history and ... END_OF_DOCUMENT_TOKEN_TO_BE_REPLACED

At a time when even some rich democracies are electing con men as their political leaders, the success of Indonesian President Joko Widodo deserves wider acclaim and appreciation ... END_OF_DOCUMENT_TOKEN_TO_BE_REPLACED

On the Indonesian island of Java, one librarian has started a mobile library, lending books to children in exchange for plastic rubbish. The idea is that they will learn to take ... END_OF_DOCUMENT_TOKEN_TO_BE_REPLACED

Water buffalo and oxen have been part of the work in Indonesian fields for centuries. But the draught animals are no strangers to sport either, as can be seen in two traditional ... END_OF_DOCUMENT_TOKEN_TO_BE_REPLACED
Author:
Edith Koesoemawiria
Date:
Mail:
Send via mail

END_OF_DOCUMENT_TOKEN_TO_BE_REPLACED
Social media
and networks
Subscribe to our
newsletter