If Europe and the US had their way, the drugs from Afghanistan would end their journey to the west at the border with Tajikistan. But such a proposal requires more resources than such a desperately poor country can manage. Tobias Asmuth reports 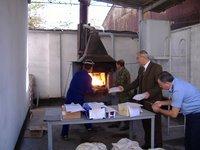 Almost eighty percent of the world's opium and heroin come from Afghanistan. Much of it goes via Tajikistan on its way west. Authorities have confiscated 43 tonnes of drugs in the last five years

​​The battlefront starts where the Pjanj river flows lazily through the plain after rushing down from the glaciers in the mountains of the Pamir range. On the other side of the river cotton fields glisten in the sun and there are mountain peaks on the horizon. That's Afghanistan, and that's where the enemy comes from—by boat, or over the bridges by car or by truck, or even avoiding the Pjanj altogether by flying in on nighttime helicopters.

Commander Halimov has orders to stop the enemy; he and his soldiers are supposed to track down the drugs—opium and heroin—which are smuggled through Tajikistan to Russia and Western Europe. The generals say it is their sacred duty to protect their country. So since last summer, it's the Tajik army instead of its Russian ally which guards the 1,344-kilometre-long border with Afghanistan.

The war on drugs is now a national task; Tajikistan needs successes which it can present to the international community. Statistics have become important.

Foreign support for an impoverished nation

Commander Halimov's troop has built a small fort close to the river, hidden among the reeds, entrenched behind machine-gun emplacements. The smugglers come when the poppy fields are being harvested in Afghanistan. They are well equipped: they drive fast Landrovers, they even own helicopters. Halimov's people use old-fashioned night-sights to see in the dark, and make their way along the dusty tracks in rattling jeeps. Whenever the weather's bad, the soldiers in the fort lose their radio contact.

​​The European Union and the USA plan to support the border troops with 25 million euros over the next few years for new equipment. But Commander Halimov's enemies will not be defeated with a bit more horsepower and good radio links. The drug smugglers have an important ally: Tajik poverty. Tajikistan is the smallest of the five Central Asian republics—it's also the one with the least raw materials and certainly the one which is most dependent on foreign support.

Already, back in Soviet times, Tajikistan, on the border with China, was seen as backward and had to be supported by the central government in Moscow with billions of dollars. After independence in 1991 the country was plunged into a cruel civil war. Unlike in its neighbours Kyrgyzstan and Uzbekistan, the old Communist Party chief was not able to take over as the new president.

The militias of the old regime, the yurchikis, fought against Islamist warlords, the wovchikis. Both of them plundered the cities and the villages, and killed almost 60,000 people. The war was over in 1997, and Emomali Rahmonov, a former communist party functionary, emerged as president.

Every other Tajik unemployed

After the war, the World Bank listed the country as one of the thirty poorest countries of the world. Its Gross Domestic Product stands at 190 dollars a year per head. Over a million of the 6.3 million people in the country take up seasonal work in Russia. Half the population at home is unemployed. Under such circumstances, smuggling drugs is a big temptation.

The profit margins are huge. In Kundus in northern Afghanistan, a kilogramme of heroin costs 1,500 dollars; in the Tajik capital, Dushanbe, the price has already risen to 20,000 dollars. By the time it's got to Moscow the price has gone up to 100,000, and a kilogramme will cost 250,000 dollars once it's arrived in Western Europe.

But Rustam Nazarov also has statistics to quote. He's director of the Tajik anti-drug authority in the capital Dushanbe, and it's his job to organise the fight against the enemy from Afghanistan. He says he's confiscated 43 tonnes of drugs in the last five years, 22 tonnes of which was heroin.

"The route via Tajikistan is more important than the route via Uzbekistan or Turkmenistan," he says. The opium and the heroin are carried in trucks and cars via Russia, Belarus and Ukraine to central Europe. Europol believes this so-called Silk Route will gain in significance since the authorities are controlling the so-called Balkan route—via Turkey, Bulgaria, Rumania, Serbia and Montenegro, Hungary, the Czech Republic and Austria—much more rigorously, and are taking much firmer action against the drug trade there.

The international smugglers react quickly and flexibly to such losses. And that means Rustam Nazarov will have plenty to do. He has nearly 350 staff working for him. His office is supported by the United Nations and will have received 4.5 million dollars by the end of this year. Nazarov is particularly proud of the laboratory on the fifth floor of his old office building. It's equipped with computers by Dell and Compaq, and the gas chromatograph, which identifies the chemical make-up of the drugs, comes from Germany.

The Tajik foreign minister, Talbak Nazarov, says it would help if the international community did more to fight poppy cultivation in Afghanistan. He's been foreign minister for twelve years—an elderly gentleman with a good reputation and many wrinkles in his face. "Fewer drugs would mean less smuggling for us," he says.

Nazarov sits at a huge table in his office in the centre of Dushanbe and explains that Tajikistan will continue to take part in the war on drugs: "We will make every effort to equip our border troops and our police with the right equipment."

But resources are limited, the current situation difficult. Five years of civil war saw the country's economy shrink by two-thirds. The recovery since then has brought it back up to half its former level. And the country's geographical situation is also a problem:

"We Tajiks live in a sack," says Talbak Nazarov. "We're surrounded by high mountains and other countries. It's a long way to the nearest sea." Without help from abroad there'll be no progress. "The drug trade is an additional danger for our development."

That's an assessment which is shared by many international observers in Dushanbe. A study by the United Nations International Drug Control Programme finds that smuggling is the main reason for the growing crime rate in Tajikistan. The drug mafia, which is built on the traditional clan structure, is undermining the state. The International Crisis Group believes that members of the military, the justice system, even senior members of government are profiting from the drug trade.

Dirty money encourages corruption. In a country where a doctor earns three dollars a month and a teacher five, almost anything has its price, whether it's information, silence, or just looking the other way.

Islamists in Tajikistan
Fragile Peace Teetering on the Brink
Tajikistan is facing economic collapse. While the powers that be are still mourning the passing of the Soviet Union, the Islamist resistance in the Fergana Valley continues to grow. Tobias Asmuth reports

END_OF_DOCUMENT_TOKEN_TO_BE_REPLACED
Social media
and networks
Subscribe to our
newsletter