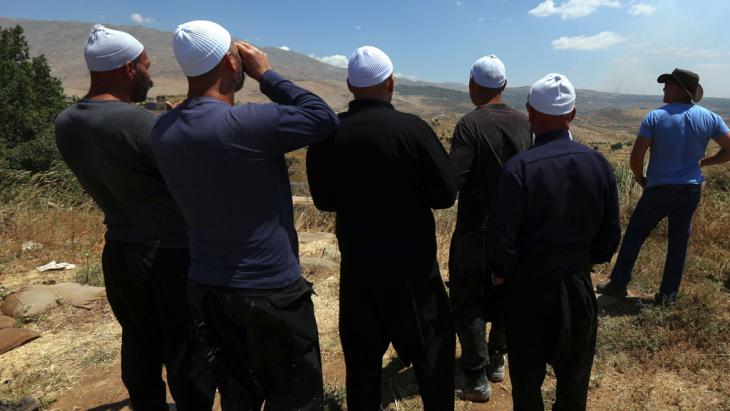 Druze in the Golan Heights
Squeezed between occupation and civil war

The Golan Heights were unilaterally annexed by Israel in 1981. At the time, many Syrian residents fled. Most of those who remained belong to the Druze community. In this article, Ylenia Gostoli takes a closer look at the situation for the Druze in the Golan Heights and shines a light on their relationship with both Syria and their co-religionists in Israel

For residents of the Druze village of Majdal Shams in the Israeli-occupied Golan Heights, the civil war raging across the border is more than the sound of shelling that can be heard as often as every other day.

Home to about 10,000 people, Majdal Shams is the largest of the four villages that were left after 130,000 Syrian Druze were expelled from their lands when Israel seized the area from Syria during the 1967 Six-Day War and later annexed it, a move that was never recognised by the international community. Thirty-three Jewish-only settlements populate the rest of the Golan, illegal under international law.

Close ties were maintained between Golan residents and the Syrian motherland, not least because the vast majority have relatives in Syria. Many separated families would meet in Jordan or see each other at Shouting Hill. Quneitra, the only border crossing between Syria and the Israeli-occupied Golan Heights, was only open to students, brides and pilgrims. Apples from the Golan were the only existing trade between the two. But the war has inevitably altered some of those ties. 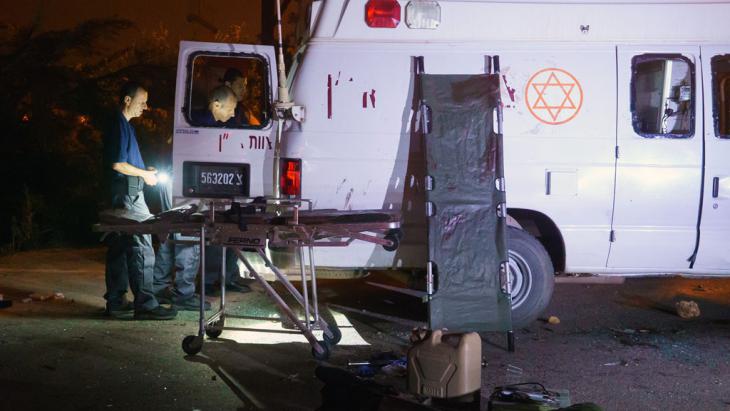 Israeli security personnel check an Israeli military ambulance that was attacked by Israeli Druze in the Israeli settlement of Neve Ativ, near Majdal Shams, as it was on its way to a hospital carrying two injured Syrians for treatment on 22 June 2015. It was reported that around 200 Druze from Majdal Shams pelted the ambulance with stones, forcing it to stop, and dragged the wounded Syrians from the vehicle, leaving one dead and the other in a serious condition

When, last June, the al-Qaida-affiliated group Jabhat al-Nusra massacred 23 residents – including children – of the Druze village of Qalb Luza in Idlib province, Druze residents of Israel took to the streets demanding the Israeli government intervene to protect Druze in Syria – a Shia minority considered heretical by Sunni groups.

Also in June, the town of Hadar, just a few kilometres away from Majdal Shams, on the opposite slope of Mount Hermon – the last remaining Syrian government stronghold along the Golan ceasefire line – was put under siege by rebel forces.

Tensions in the area then flared when a mob of 200 people from Majdal Shams attacked an ambulance carrying injured Syrians who they alleged were Syrian rebels. One of the injured was beaten to death; another was seriously injured. The attack was widely condemned. For the past two years, the UN Disengagement Observer Force (UNDOF), whose mandate is to maintain the ceasefire between Israeli and Syrian forces in the Golan, has been documenting interactions between opposition fighters and the Israeli army. While Israel maintains its involvement is purely "humanitarian" and limited to treating the wounded in Israeli hospitals, critics accuse Israel of aiding al-Nusra. 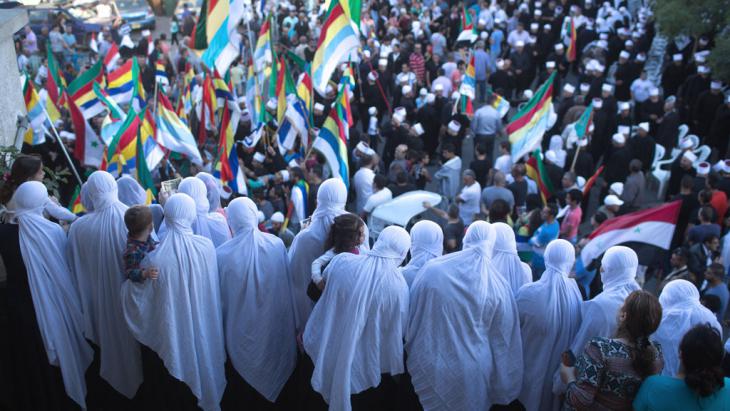 The Druze in Golan and Israel

Apart from the protest mentioned above, however, most Golanese Druze have distanced themselves from the position of their co-religionists inside Israel.

"Over the last decades, the relationships between the Druze in Israel and those in the Golan has been very cold and distant," said Tobias Lang, a political scientist who wrote a book about the Druze minority in Syria and Lebanon. "The majority of the Druze in Israel serve in the army and accepted a particularistic Israeli-Druze identity, whilst Golani Druze stayed loyal to the motherland."

"We don't share most of their demands," said Salman Fakhr Edeen, a resident and researcher at a local human rights NGO. "I myself am against the war. To increase killing on the other side, that's not a peaceful position. We are talking about our families, our people."

"It's cynical to talk about economic issues when you compare it to the lives lost," adds Fakhr Edeen, "but it's true that we [in the Israeli-occupied Golan Heights] had a lot of benefits from Syrian government, and the regime is losing its influence."

For many years, 400 to 500 young people from the Israeli-occupied Golan Heights would cross into Syria to attend university there, encouraged by the fact that there were no fees and that the Syrian government even provided a small monthly stipend. Security concerns have now left students with two choices: enrolling at universities in Israel or going abroad. 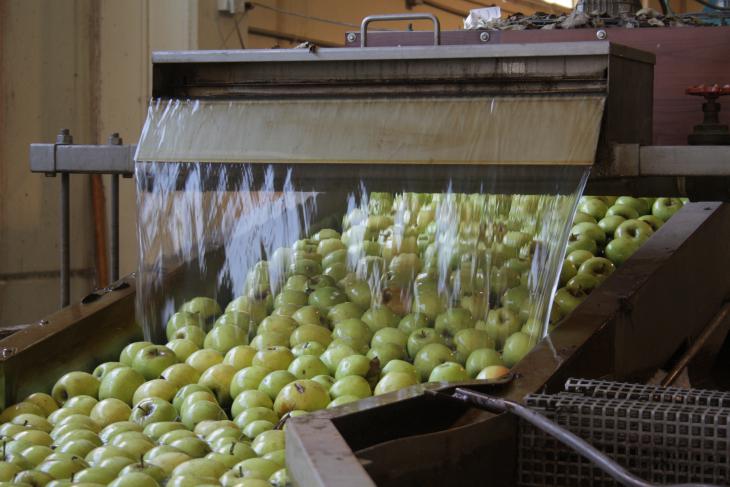 Students and apples used to be some of the few things allowed to cross Quneitra, the border checkpoint between the Israeli-occupied Golan Heights and Syria. "We used to sell up to 20 per cent of the product to Damascus," said Tayseer Maray, director of the NGO Golan for Development. "But since Jabhat al-Nusra first attacked the Quneitra crossing two years ago, trade stopped. We are still searching for alternatives"

Apples from the Golan

Since 2005, the ICRC had helped Golan farmers sell their apples to Syria, whose government bought about 20 per cent of the total production. But apples from the Golan were more than a trade: the Syrian government used to buy them at a higher price than that offered on the Israeli market.

"In 2013, we could still market 14,000 tonnes of apples in Syria," Asaad Safadi, manager of an apple processing plant in Majdal Shams told Qantara.de. "But this year and the previous season have been problematic. We've had lots of apples and the prices on the Israeli market are very low. We don't have the ability to compete with settlers' apples. First because they get four times more water than we get, and secondly because we are all small farmers, we don't have the same marketing power," Safadi said, adding that in some years, farmers' expenses exceed their income.

"I do it to protect my land," said Sameh Ayoub, a small farmer and activist from Majdal Shams, "for many farmers here it is the same. Very few people own enough land to still make a living out of it. So we go to work in Tel Aviv or the settlements in order to bring in money to protect the farms," he says. According to Israeli law, if agricultural land is not planted for 15 years, it becomes government land. 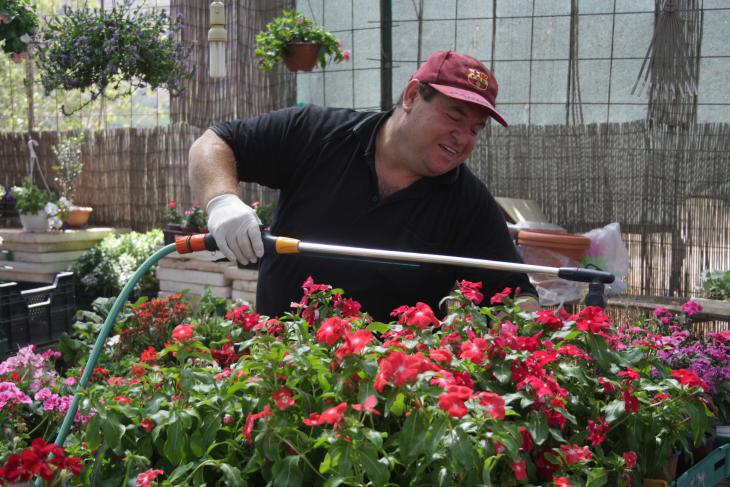 Even though expenses exceed income for farmers some years, many still work the land in order to prevent it from becoming government land: "Very few people own enough land to still make a living out of it. So we go to work in Tel Aviv or the settlements in order to bring in money to protect the farms," says Sameh Ayoub, a small farmer. Pictured here: Samir Owidat in his flower shop in Majdal Shams

Split between supporters and opponents of the Syrian regime

Samir Owidat, 55, is less interested in apples. An electrician on weekdays, he plants and sells flowers as a hobby.

"Of course what happens in Syria affects us all. People have turned against each other," he said referring to the growing split between supporters and opponents of the regime. Some of his family still lives in Damascus and when he studied there, he says, "I didn't know or care who was Druze or Christian or Muslim. We were all Syrians."

In 1981, Israel tried to impose Israeli citizenship on the Golan Druze. The four villages responded by discarding their blue IDs on the streets and with a six-month strike, at the end of which the government gave in. As a result, today most residents have no passport or citizenship – they carry a travel document that designates their nationality as "undefined". According to the Israeli media, in recent years more people, particularly among the younger generation, have been taking up Israeli citizenship for various reasons, including the practicalities of finding work in Israel. However, official numbers have never been published.

Shada Safadi, a 32-year-old artist, was among those that took advantage of the possibility to study in Damascus, where she completed a degree in Fine Arts. In the Syrian capital, she also built strong ties with the young intellectuals who took a stance against the regime and were at the forefront of the Syrian uprising before the brutal crackdown by the regime.

"Many times since I have been invited to exhibit my work in Tel Aviv, Netanya, or other Israeli cities, but I refused," said Safadi, whose work has been exhibited in London and Ramallah. "We didn't used to raise the Druze flag all the time, now they even distribute it in the schools," she said. "As for myself, I identify as Syrian."

A leading light of Israeli theatre, Ofir Henig has directed the Israel Festival and is the only female director to have been awarded the Israel Theatre Prize. These days, however ... END_OF_DOCUMENT_TOKEN_TO_BE_REPLACED

With the current leadership of Iran quick to lay the blame for the Iran protests on Israel, the chances of harmonious relations between the two countries still seems remote. Yet, ... END_OF_DOCUMENT_TOKEN_TO_BE_REPLACED

Daniel Barenboim is not only a world-famous pianist and conductor. He has also worked tirelessly to foster understanding and reconciliation between Palestinians and Israelis. By ... END_OF_DOCUMENT_TOKEN_TO_BE_REPLACED

After a two-year hiatus, the Arab League re-convened at the beginning of November in Algiers against a backdrop of uncertainty and discord. By Pierre Boussel END_OF_DOCUMENT_TOKEN_TO_BE_REPLACED

On 1 November, elections are set to take place in Israel for the fifth time in four years. If Arab minority voters decide to stay home out of frustration at their divided parties ... END_OF_DOCUMENT_TOKEN_TO_BE_REPLACED
Author:
Ylenia Gostoli
Date:
Mail:
Send via mail

END_OF_DOCUMENT_TOKEN_TO_BE_REPLACED
Social media
and networks
Subscribe to our
newsletter