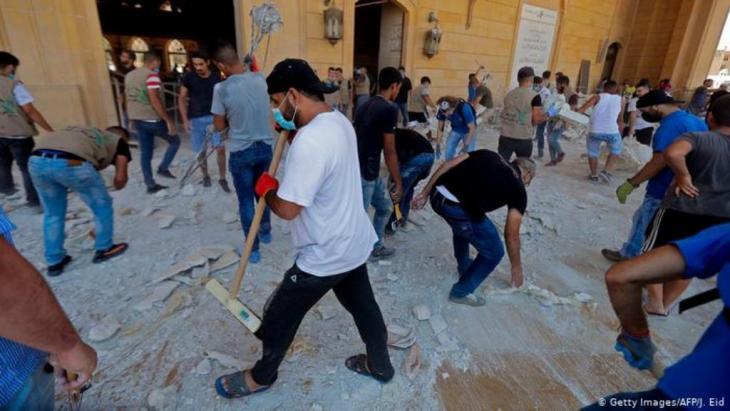 The political and economic crisis in Lebanon started long before the devastating explosion on 4 August 2020. But since then, the country has been in freefall. Young people in particular are asking whether they have a future there at all.

For months, the Lebanese people have been calling for regime change. The government resigned at the end of 2019 after months of sometimes violent protests, but the economic situation is still deteriorating.

The Lebanese currency is in freefall, the price of food is rocketing and to make matters worse, the number of coronavirus infections is rising dramatically.

The people saw the explosion in Beirut’s port area on 4 August as another symbol of political failure. More than 170 people were killed and around 6,000 people injured, and an estimated $15 billion worth of damage done.

Documents reveal that the authorities were aware of the improper storage of the highly explosive ammonium nitrate, which is why Nour Bassam and her fiance Hussein Achi are not giving up. The young couple have been fighting for political change since autumn 2019.

Immediately after the explosion, Hussein and his organisation, "Min Tishreen", set up an emergency aid centre in the ruins of the Mar Michael district. But Hussein is concerned with more than distributing food and medicines and rebuilding the destroyed city.

While many of his friends are deserting their country, he wants to establish a new political culture in his homeland. Hussein senses the people’s anger at the country's old political elite. Will they succeed in asserting themselves against their corrupt rulers?"

Home
Print
Newsletter
More on this topic
Interview with Lebanese political scientist Bassel Salloukh: Will a new Lebanon arise from the ashes of Beirut?Lebanon after the explosion: Beirut's aftermath – shattering as 15 years of civil warBeirut on the brink: Regardless of corona, Lebanon is at economic breaking point
Related Topics
Confessionalism, Coronavirus, Democracy and civil society, Economy, Hezbollah, History of the Near and Middle East, Lebanese Civil War, Poverty, Social movements
All Topics

November 2022 sees the Arab world firmly in the spotlight with the COP27 in Egypt and the FIFA World Cup in Qatar. Public trust in MENA governments is weak, thanks to their ... END_OF_DOCUMENT_TOKEN_TO_BE_REPLACED

"You are not my guide... I am the compass. Iranian women have spoken, freed themselves, and unleashed a revolution despite smelling death. They have cut their braids in anger; ... END_OF_DOCUMENT_TOKEN_TO_BE_REPLACED

In “The Wrong End of the Telescope”, Rabih Alameddine draws us away from the headlines and into the personal story of one individual. Mina is complex, compelling and very real. By ... END_OF_DOCUMENT_TOKEN_TO_BE_REPLACED

How are comic book artists in the Arab world responding to the political situation in the region? Lena Bopp talks to illustrators Lina Ghaibeh and George Khoudry about young ... END_OF_DOCUMENT_TOKEN_TO_BE_REPLACED

The clashes in Baghdad between supporters of Muqtada al-Sadr and pro-Iranian militias show that an intra-Shia power struggle is in full swing. An analysis from Cairo by Karim El- ... END_OF_DOCUMENT_TOKEN_TO_BE_REPLACED
Date:
Mail:
Send via mail

END_OF_DOCUMENT_TOKEN_TO_BE_REPLACED
Social media
and networks
Subscribe to our
newsletter