How active are Islamist groups in Sri Lanka? Could they have launched multiple, well-coordinated terrorist attacks in different parts of the country without the support of global jihadist organisations? By Shamil Shams

The Sri Lankan government said on Monday that National Thowfeek Jamaath (NTJ), a local Islamist extremist group, was behind the deadly bombings on Easter Sunday that killed nearly 300 people.

Government spokesman Rajitha Senaratne, who is also a Cabinet member, said the Sri Lankan government was investigating whether NTJ had "international support."

"We don't see how only a small organisation in this country could do all that," he said. "We are now investigating international support for them, their other links, how they produced suicide bombers here, and how they produced bombs like this."

It was reported on Sunday that Sri Lanka's police chief had issued a warning on 11 April, saying that a "foreign intelligence agency" had warned that NTJ was planning attacks on churches and the Indian High Commission.

Police also said on Sunday that they had arrested 13 Sri Lankan citizens in connection with the attacks.

What is National Thowfeek Jamaath?

"We don't know much about NTJ, but it looks similar to many other terrorist groups active in South Asia, such as the Ansarullah Bangla Team (ABT) in Bangladesh. Like the ABT in Bangladesh, it appears that NTJ is also inspired by al-Qaida," commented Siegfried O. Wolf, a South Asia expert at the Brussels-based South Asia Democratic Forum.

"Its main goal is to spread a jihadist ideology and create fear and hatred. It is also against any kind of national reconciliation and thus works to keep ethnic and religious conflicts alive," he added.

Ties between Sri Lanka's majority Buddhist community and the Muslim minority have been tense for the past few years.

In March 2018, the Sri Lankan government declared a country-wide state of emergency to suppress communal violence between Muslims and the primarily Buddhist majority Sinhalese on the Indian Ocean island. But analysts say that although Sri Lanka was ravaged by decades of the Tamil separatist insurgency that was crushed militarily in 2009, the country has little history of Islamist violence.

Sri Lanka is a Buddhist-majority country, with just 6% of the population adhering to the Catholic faith. Muslims make up 10% of the total population.

"Local Islamist groups are not very strong in Sri Lanka. But it is also a fact that the government says that most suspects of Sunday's blasts belong to the Muslim community," explained S. T. Nalini, a Sri Lankan rights activist.

"Religious extremism is growing throughout South Asia. Sunday's attacks could have been triggered by the conflict between Buddhists and Muslims, not only in Sri Lanka, but also in Myanmar. So extremist Muslim groups and radical Buddhist organisations are active in the region," Nalini added.

But the question remains as to why Sri Lanka's local Islamists chose to target churches and foreigners on Easter, rather than trying to inflict harm on Buddhists?

"International terrorist groups are increasingly hijacking local conflicts to extend global jihad to different parts of the world. The Uighur conflict in China's western Xinjiang province and the Rohingya conflict in Myanmar are two examples. In both cases, global jihadist organisations seek to instrumentalise local issues to broaden their support," Wolf said.

Analysts say that militant groups like Islamic State and Al-Qaida in the Indian Sub-continent (AQIS) are becoming increasingly active in South Asia, with their affiliates also focussing on countries other than Afghanistan and Pakistan, where they are already quite strong.

"Sri Lanka turned into one of the most popular tourist destinations in the last 10 years with tremendous efforts from the government. Such attacks promise international attention," said Wolf, adding that churches in Sri Lanka are "soft targets" for terrorists.

The Brussels-based scholar said that Sri Lankan militant groups have a long history of linking up with international terror organisations.

"The necessity of generating funds prompted even separatist groups like the Tamil Tigers to seek outside help," said Wolf.

Sunday's attacks have also raised fears of a resurgence of the communal violence that has often plagued Sri Lanka. Police reported late on Sunday that a mosque in the northwest had suffered a petrol-bomb attack and that two Muslim-owned shops in the west were targeted by arsonists.

Top Muslim leaders have condemned the church and hotel attacks, describing them as "dastardly acts" that deserved "maximum punishment."

"On behalf of the Sri Lankan Muslim community, we offer our condolences to the people of Christian faith and extend our hands of friendship in solidarity," said the All Ceylon Jamiyyathul Ulama, or council of Muslim theologians.

The bombings are a huge setback for Sri Lankan authorities, as they have managed to rein in some of the violence in the country over the last 10 years. The decades of Tamil insurgency in the country's north had killed thousands of people until former president Mahinda Rajapaksa defeated the Liberation Tigers of Tamil Eelam (LTTE) separatist movement in a 2009 military operation.

But analyst Wolf said the absence of violence did not mean that Sri Lanka had overcome its serious social and political divisions.

"The ethnic-religious conflict between the Buddhist Sinhalese majority and the Hindu Tamil minority officially ended in 2009, however, the conflict still exists in the country as there hasn't been any political solution to this multi-faceted problem," said Wolf, adding that increasing economic and financial tensions are also mounting due to the implementation of the Chinese Belt and Road infrastructure initiative.

"Despite the boom in tourism, unequal development and foreign interventions are also functioning as a catalyst for political conflicts in Sri Lanka," he said.

Obscurantism is making it harder to prevent Covid-19, not only in Southeast Asia. Though India's lockdown was poorly planned, we must hope it will prove effective. By Aditi Roy ... END_OF_DOCUMENT_TOKEN_TO_BE_REPLACED

Islamophobia is rife in Sri Lanka, Myanmar and Thailand, with Buddhist monks heading up the hate campaigns against Muslims. Yet the roots of the conflict run deep. A report by ... END_OF_DOCUMENT_TOKEN_TO_BE_REPLACED 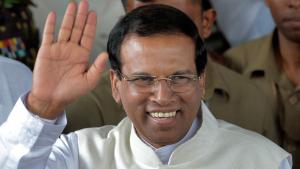 Maithripala Sirisena was the surprise winner of last week's presidential election in Sri Lanka. He was swept to power on a platform of political reform and an end to corruption. ... END_OF_DOCUMENT_TOKEN_TO_BE_REPLACED 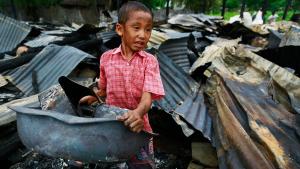 Nationalist Buddhist monks in Myanmar and Sri Lanka are playing a key role in instigating hatred and provoking violence towards the Muslim minorities in both countries, claiming ... END_OF_DOCUMENT_TOKEN_TO_BE_REPLACED
Author:
Shamil Shams
Date:
Mail:
Send via mail

END_OF_DOCUMENT_TOKEN_TO_BE_REPLACED
Social media
and networks
Subscribe to our
newsletter