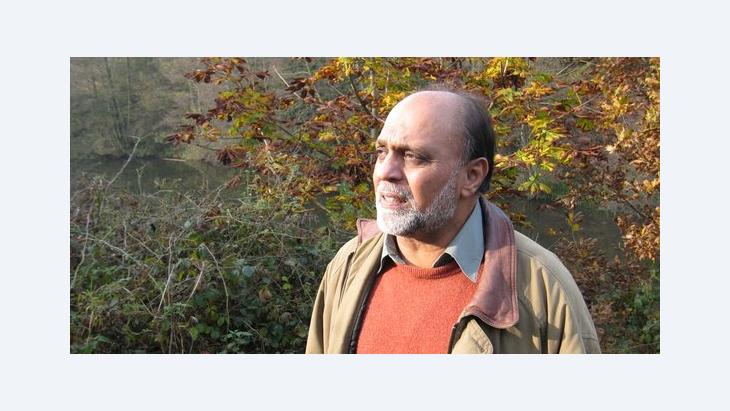 Eco-Islam Pioneer Fazlun Khalid
''Allah Does Not Love the Wasters''

﻿It's not enough to simply pray for a better environment, you have to stand up and take action, says Fazlun Khalid, one of the world's leading eco-theologians. He believes religion can help save the planet. Interview by Franziska Badenschier

﻿Mr. Fazlun Khalid, every three years around ten million Hindus attend the Kumbh Mela festival and take a bath in the Ganges River. Each year, three million Muslims travel to Mecca in Saudi Arabia, and some religions encourage believers to have many children. With all due respect, it seems that being religious is not very environmentally friendly. Is it?

Fazlun Khalid: Religious traditions existed long before modernity, before the industrial revolution. There is no evidence that these pilgrimages caused global environmental pollution or an increased carbon footprint. What people are practicing today is what their ancestors have practiced before for centuries – with the difference that we are living now in an age of mass transportation, mass communication and almost mass everything. So now, millions of pilgrims go to places like Mecca. And of course, when people come together in a concentrated space in a small time scale, there is bound to be an environmental impact.

But this will not have an impact in long-term scales. There are now tentative discussions about restricting these pilgrimages to one per person per lifetime but this produces administrative nightmares. And what does the society do about mass tourism which is a growth industry transporting millions of people to environmentally sensitive places all over the earth? Millions do it and their environmental impact is far greater than that of the pilgrims. 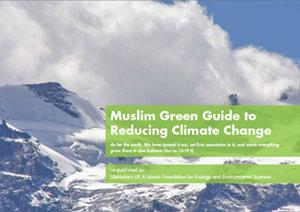 "We all share a common planet and there is no escape. So we need to talk to each other and work together." - Pictured: Cover of the IFEES's "Muslim Green Guide to Reducing Climate Change"

​​You are working to ensure that your religion, Islam, helps to protect the environment. How? Does the Koran instruct Muslims to protect nature or even become environmentalists?

Fazlun Khalid: The Koran lays down quite basic ethical principles. And these are interpreted by the prophet in the way he behaved. For example, the Koran says quite emphatically in Chapter 6, verse 141: "Allah does not love the wasters." This verse was exemplified by the Prophet when he chided one of his companions for throwing away water he had left over in his bowl after he had washed himself. The Prophet told him to return the surplus water back to the river so that other people who need it further downstream can use it.

In 1994, you founded the Islamic Foundation for Ecology and Environmental Sciences, or IFEES, in Birmingham, England. But before that, you worked in the interior ministry in the UK. What made you quit your job in politics and focus on religion and environment?

Fazlun Khalid: That's a long story because there is not one special moment that made me change my course. But to cut it short: I was born in Sri Lanka in 1932 and came to the United Kingdom in 1953 to join the Royal Air Force; I wanted to become an aeronautical engineer. I got involved in trade union activities after I left the Royal Air Force in 1962 and got drawn into industrial disputes involving new immigrant labour and insensitive management.

These activities politicized me and I decided to abandon the engineering career I had set my heart on and turned to serving people. I then spent short spells in university and as a social worker. And in 1968, I was recruited as a conciliation officer by the Race Relations Board, subsequently the Commission for Racial Equality. 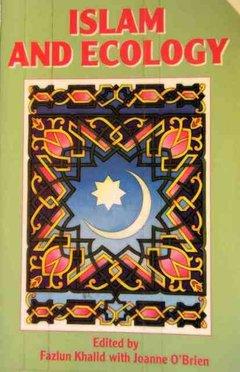 Universal Islamic ethics: "Every single thing we do affects other people, other things," Fazlun Khalid says. - Cover of "Islam and Ecology", co-edited by Fazlun Khalid

​​I was further politicized by my experiences in these organizations which led me to believe that issues relating to race, poverty and debt in the Third World had common origin: political domination. At the same time, I started going to meetings organized by environmental organizations like WWF. At one of these meetings in the early 1980s I was asked: what has the Islam to say about the environment? I did not have an answer but this led me on a path of enquiry which took me to Koran scholars and teachers of Islam.

None of them could give me a satisfactory answer that suited the needs of the times. So I left my senior position in the Ministry when I was 58 years old and re-entered university to research the basis of Islamic environmentalism. In 1994, I founded the Islamic Foundation for Ecology and Environmental Sciences (IFEES). With this environmental charity we are for example working on reforestation programs with pupils in religious schools in Indonesia.

Were there any IFEES projects in your homeland Sri Lanka?

Fazlun Khalid: We gave a small workshop once, but there were no real projects. But one personal experience in my home country was important to me. When I began to have an environmental consciousness, one of my brothers who still lives in Sri Lanka took me to visit the tea plantation areas in the mountains. I thought: "All the tea we drink in the world comes from areas which were once pristine rain forest; how could you have done this?" Of course, it changed the economy of Sri Lanka and tea is now a large foreign exchange earner. But we have to reflect on this: globalization has a profound impact on the natural world.

One of your biggest successes with the Islamic Foundation for Ecology and Environmental Sciences was your project in Zanzibar. How did that come about?

Fazlun Khalid: In 1999, I got a call from the program officer for CARE International in Zanzibar. Fishermen couldn't feed their families anymore because overfishing and dwindling resources had left very little for them. So the fishermen threw dynamite into the coral reefs to get fish from there. We then went to them and did a two-day-workshop based on the Koran. Within 48 hours we achieved what international organizations couldn't do in four years: namely to stop the fishermen from dynamiting the coral reefs.

What exactly made the fishermen change their minds? 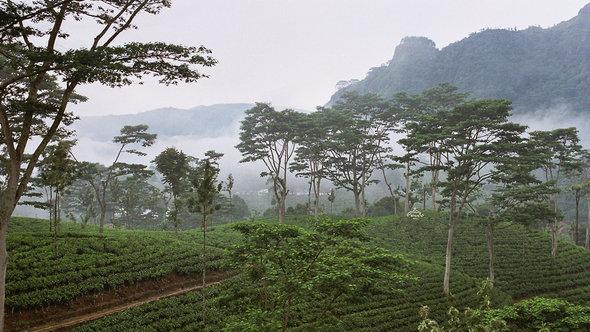 Globalization's impact on the natural world: Many tea plantations in Sri Lanka are located in former rainforests. The Koran, however, teaches man to respect the environment, Fazlun Khalid says, quoting Sura 40, verse 57: "Everything in creation is bigger than you"

What about other religions? Are they competitors in terms of evangelizing for environmentalism?

Fazlun Khalid: Take this metaphor: People of different religions are sitting in one room and then the roof falls down on their heads. Would you really leave the room saying: "You are a Catholic, you are a Hindu, and this is not my business, so I leave you behind"? We all share a common planet and there is no escape. So we need to talk to each other and work together. I chaired a conference on Religions, Land and Conservation in Japan in 1995: Nine different traditions were represented and we arrived at ten points that were common to us all. For example we had no problems in agreeing that all our traditions call us to care for the earth. That is perhaps an obvious point but evidence of this is not reflected in our actions.

You are now 80 years old and still working to make Eco-Islam more popular. And you seem to be still very enthusiastic – where does your energy come from?

Fazlun Khalid: I don't know. Perhaps because as a believer I am required to place my forehead on the earth five times a day. Maybe my power comes because of my seven lovely grandchildren. I have inherited a wonderful green planet – and I would like to leave it for them in a better condition than I found it. What am I leaving behind for my children and grandchildren? This is a question which – if honestly answered – could make environmentalist of all of us. Sure, this is a more general advice, not a religious one. But the Koran also says in chapter 40, verse 57: "Everything in creation is bigger than you." This is so even if Allah has given us a special standing because of our intellect.

We need to realize that there is no such thing as a solo act which we refer to in this modern society of ours as individualism. Every single thing we do affects other people, other things. If I cut down a tree here in England somebody in Germany will eventually feel the consequences of that action; or if somebody in China plants a tree somebody in Europe will benefit from it. We have to change our lifestyles because the consequences of modern life are global and lethal. We have to reduce this high-carbon footprint; we need to consume less; to travel less. To carry on as we do has consequences. And that is a form of collective suicide.

One year ago the Taliban returned to power, seizing Kabul; the U.S. and its allies made a panicked exit from the country. Of all the books written on the subject, four stand out ... END_OF_DOCUMENT_TOKEN_TO_BE_REPLACED

In "Iran. Die Freiheit ist weiblich", journalist Golineh Atai describes the dogged resistance of courageous Iranian women against the Islamic Republic and the mullahs who have ... END_OF_DOCUMENT_TOKEN_TO_BE_REPLACED

Unflattering terms were used at a German Football Association human rights congress aimed at "intensifying the discussion" ahead of the World Cup. One speaker in particular made ... END_OF_DOCUMENT_TOKEN_TO_BE_REPLACED

Egyptian authorities have Mada Masr in their sights once again after critical reporting. But the editor of the country's last independent news source is adamant they will continue ... END_OF_DOCUMENT_TOKEN_TO_BE_REPLACED

Like Christianity, Europe's history is one of migration. Both have strong roots in the Orient and in cultures thousands of years old. Cultural historian Bernhard Braun invites us ... END_OF_DOCUMENT_TOKEN_TO_BE_REPLACED
Author:
Franziska Badenschier
Date:
Mail:
Send via mail

END_OF_DOCUMENT_TOKEN_TO_BE_REPLACED
Social media
and networks
Subscribe to our
newsletter