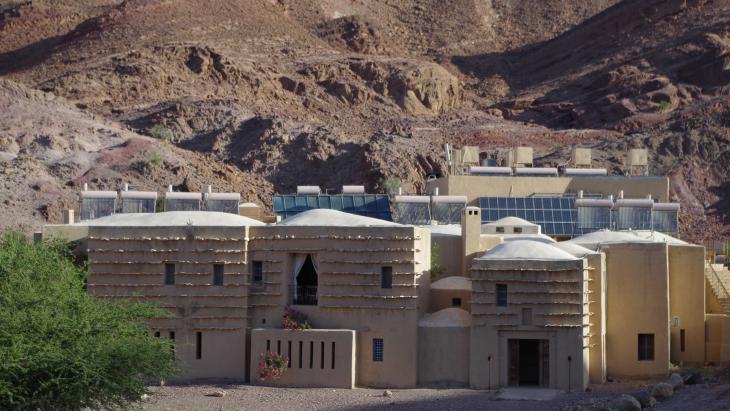 Guests of the Bedouin

The Feynan EcoLodge in southern Jordan is one of the few socially and ecologically sustainable tourist destinations in the Middle East. The project, managed and run by a group of local Bedouin, gives visitors an intriguing insight into a culture in transition. Claudia Mende reports from Feynan

Suleiman Hassaseen gracefully tosses a ball of chickpea dough into hot oil. Beside him, an American tourist watches his every move and then manages to follow his example without burning her fingers. Bedouin Hassaseen is demonstrating the making of falafel and other local delicacies to a small group of tourists. He bakes flatbread and prepares a tahini salad with them. Eating is done together. A stay at the Feynan EcoLodge in southern Jordan is all about getting involved. Visitors arrive as tourists but soon come to see themselves as guests of the Bedouin who live in this valley.

Feynan EcoLodge is located in the remote Wadi Araba region of southern Jordan, around a two hour drive from the capital city of Amman and close to the Dana Nature Reserve. The valley is home to around thirty or forty nomad families, who still follow what is very much a traditional way of life, living in tents woven from the hair of their own sheep and goats. The lodge stands at the end of the valley; a minimalistic mud brick building, it looks more like a desert monastery than a place to take a holiday. Top Jordanian architect Ammar Khammash is the designer of this, his country's first, eco-lodge.

A socially and ecologically sustainable project

Lodge manager Nabil Tarazi is convinced that the region urgently needs to encourage socially and ecologically sustainable tourism. The sort of hotel complexes built along the Red and Dead Sea coasts, mere copies of the seaside resorts of the Caribbean or the Canary Islands, are not the answer when it comes to attracting tourists in the long term, he feels. It is not only political instability that keeps tourists away; it is also the lack of the right sorts of facilities. "What we are doing represents a radical departure from old-style tourism", explains Tarazi. Feynan is more than just an eco-lodge; it is a socially and ecologically sustainable project and one that has been integrated into its surroundings in a culturally sensitive way.

Suleiman Hassaseen is a native of Wadi Araba. The 27-year-old lives with his parents and ten siblings in a traditional Bedouin tent about 500 metres from the lodge. As a child, it was his job to herd the goats and the sheep, so he knows every inch of the rugged mountain landscape and every plant that grows there. Hassaseen is one of around 20 employees who run the lodge more or less independently. They work as a team, he says, all of them members of local Bedouin families. In order to involve as many families as possible, usually no more than one person from each clan will be taken on.

Hassaseen accompanies tourists on their walks. He points out the wild plants used by the Bedouin in their herbal remedies and passes on his knowledge of them and of the geology of the mountains to them and shows visitors the best places to go bird watching. Patiently, he sits his guests down with the Bedouin in the valley, where the tea flows freely and the talk is sprinkled lightly, to while away the passing hours. 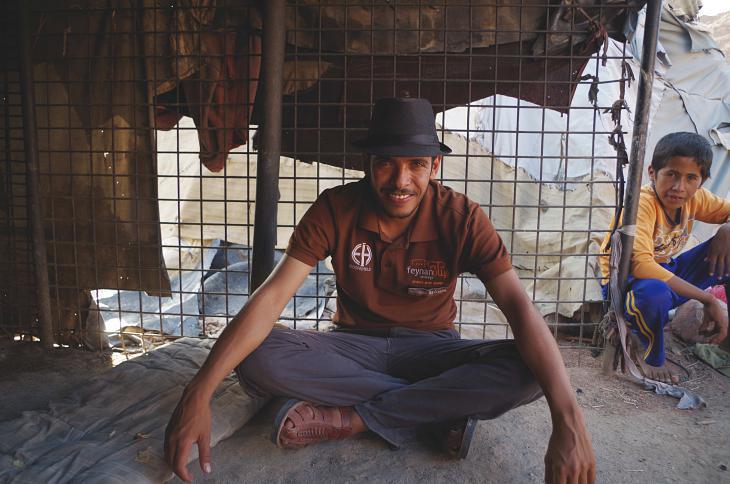 In harmony with nature: "Suleiman Hassaseen is a native of Wadi Araba. The 27-year-old lives with his parents and ten siblings in a traditional Bedouin tent about 500 metres from the lodge. As a child, it was his job to herd the goats and the sheep, so he knows every inch of the rugged mountain landscape and every plant that grows there," writes Claudia Mende

Manager Tarazi, on the other hand, is not a native of Wadi Araba. Born in Ramallah, in the Palestinian Territories, he grew up in Jerusalem and studied in London. He worked for years as a senior manager in a Canadian IT company, until, one day, he decided he had had enough of the business world. After a year-long sabbatical, during which he travelled through Asia and the Arab world, he resolved to do something more meaningful with his life – "give something back to the community," as he puts it.

When, in 2009, the Jordanian "Royal Society for the Conservation of Nature", which owns the lodge, was looking for someone to put forward a strong ecological concept for its future, Tarazi jumped at the chance. He had found his calling. The sustainability of Feynan is his driving passion. Photovoltaic panels on the roof of the lodge generate the electricity for the 26 rooms and produce hot water. Paper, plastic and metal waste is collected and recycled in Amman. Only glass is something of a problem, because there is no longer any glass recycling facility in Jordan. Cheap imported Chinese glass has made it not worthwhile. Lighting in the evening comes from around 300 candles; only the bathrooms and offices have electric lights and there is no air-conditioning. Water, which is used sparingly, is supplied by a mountain spring.

Tarazi is particularly proud of the fact that Feynan is a plastic-bottle-free-zone. They are a plague in Jordan. In the ruined city of Petra alone, between one and two million bottles are dropped every year and left lying around. A catastrophe, says Tarazi. At Feynan, they use handmade clay pottery produced by a women's co-operative near Petra and for hiking trips a lightweight alternative made of an eco-friendly synthetic material has been developed. It all adds up to a reduction of around 15,000 plastic bottles a year.

Although Feynan has also been affected by Jordan's slump in tourist numbers since 2015, it has done considerably better than other tourism providers with 5,500 visitors coming to the lodge every year. The people of Wadi Araba, therefore, continue to benefit directly from the project. The baker's wife, Umm Khaled, for example, supplies flatbread to the lodge, enabling her to earn some additional income for her family.

Umm Khaled bakes in a small stone hut next to her tent. It has a fire, a griddle and little else, yet she still manages to bake up to 80 flatbreads a day. Around fifty years old – though no one seems to know precisely how old she is – she is happy to have people drop by to admire her dough-making skills – all done to the lively accompaniment of straying goats and playing children. The bread at the Feynan EcoLodge is very fresh! 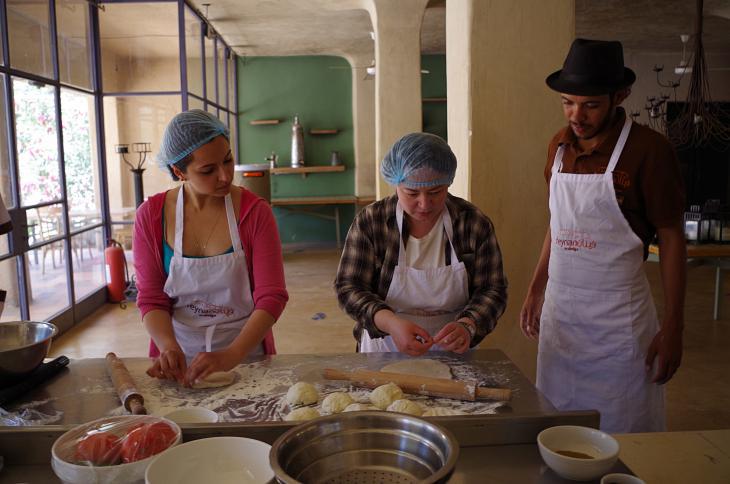 Cooking the Bedouin way: the "Feynan EcoLodge" offers visitors an intriguing insight into the day-to-day life and culture of the Bedouin in Jordan. Cookery courses, hiking trips and direct contact with the locals all feature in the lodge′s sustainable eco-tourism concept

It's unusual for a woman in Wadi Araba to earn her own money. The life of the Bedouin here still follows traditional patterns and it is very rare for women to work outside the home. Some of the men here have several wives – permitted under Jordanian law – but while the idea of the nuclear family has become the norm in the capital, it is not so among the Bedouin. Life here is dictated by a special code of honour. Hospitality is considered sacred; so it is necessary to keep sheep and goats to slaughter when guests arrive. A chicken is not enough and would be seen as an affront to guests. But only in good years is there a living to be had from the animals. Fifty percent of the revenues from "Feynan EcoLodge" go directly to the local Bedouin families, a crucial extra source of income that makes it possible for them to continue living here.

It's a way of life that is changing very rapidly. Only around one percent of the population of Jordan is nomadic or semi-nomadic. As elsewhere in the country, the government has resettled many Wadi Araba families in stone houses, although by no means all were happy to do this. In some cases, they have even put up tents to live in alongside their houses. Suleiman Hassaseen is one of those who finds the idea of living in a house of stone unthinkable. He values the simplicity of life in a tent. But how will his children want to live later? "In a tent of course," Hassaseen says with conviction.

Nabil Tarazi has a more pragmatic attitude. He cannot imagine that the next generation will still be living in tents. "Our project is part of the cultural change that is going on," he says. It is not, he feels, about trying to preserve Bedouin culture as if it were a museum piece, but about smoothing the transition to a modern life without them having to give up their culture completely. It is important, therefore, that the Bedouin culture is valued and not just put on show as a tourist attraction, as often happens in Petra or Wadi Rum.

In Feynan, the old and new cultures co-exist. In the evening, up on the flat roof of the lodge, Suleiman Hassaseen is talking about the stars. With the aid of a modern high-powered telescope, powerful enough to reveal the moons of Jupiter, he tells his guests Bedouin stories about the constellation Ursa Major. They are stories of love and death, happiness and loss – stories of long ago. 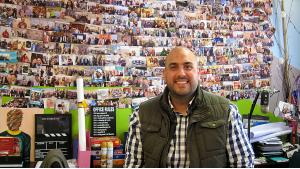 Business in the Middle East

Young people in Jordan are increasingly turning to digital start-ups to improve their prospects, rather than relying on the countryʹs rigid labour market. Claudia Mende reports END_OF_DOCUMENT_TOKEN_TO_BE_REPLACED

Coronavirus continues unabated. Iran remains a hub of infection, war-torn Syria has recorded its first case and Yemen is bracing itself for the worst. Here’s the latest from ... END_OF_DOCUMENT_TOKEN_TO_BE_REPLACED

With borders closing and the opportunities for international travel shrinking by the hour, we take a look at coronavirus developments across the Middle East and the wider Muslim ... END_OF_DOCUMENT_TOKEN_TO_BE_REPLACED

As the global economy reels and everyday life grinds to a standstill, we take a look at the spread of coronavirus across the Middle East and the wider Muslim world – and the ... END_OF_DOCUMENT_TOKEN_TO_BE_REPLACED

Education is the key to the future. Muzoon Almellehan has known this since she was 14 years old. But she lives in a Jordanian refugee camp. And since then she has been fighting ... END_OF_DOCUMENT_TOKEN_TO_BE_REPLACED

END_OF_DOCUMENT_TOKEN_TO_BE_REPLACED
Social media
and networks
Subscribe to our
newsletter