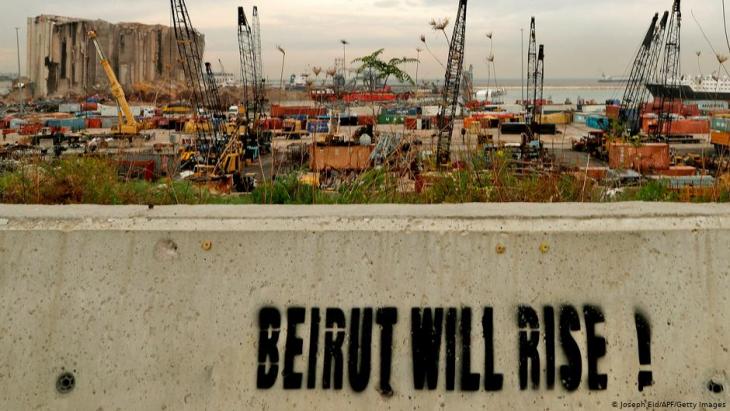 Flour, medicine, fuel … a whole range of essential goods is subsidised in Lebanon. If the subsidies stop, then prices, poverty and the possibility of conflict increases. If they don't, the country runs out of money. Local experts say they have an answer. They just need politicians to act on it. Cathrin Schaer reports from Beirut

As the country's financial crisis continues, Lebanon's central bank has warned it could run out of money to pay subsidies on basic goods by early 2021. If this happens, observers, including the United Nations and local NGOs, have warned of disaster. They say if authorities do stop subsidising certain goods – especially flour, fuel and medication – prices will rise massively, potentially leaving over three-quarters of Lebanese living in poverty.

Beirut bakery owner, Mona Mallah, is only too aware of what could happen if subsidies go. Her business is already suffering because the price of flour has risen during the country's ongoing financial and political crisis, the pandemic and the lasting social impact of the explosion in Beirut's port.

"The price has doubled," Mallah told DW. "Everything we earn barely covers our expenses. If they remove subsidies on bread and fuel, we will end up living in the dark with no running water," she complains. "Why are people accepting this?"

There have already been protests against the weakening of subsidies, with demonstrators burning tyres and blocking Beirut streets. This month, the Lebanese General Labor Union threatened a nationwide strike if subsidies were removed.

"If subsidies are just completely cut off all at once, it might lead to complete chaos in the country, Wissam Hmeidani, who works for an insurance company in Beirut, says. "It will be too much for people to handle." 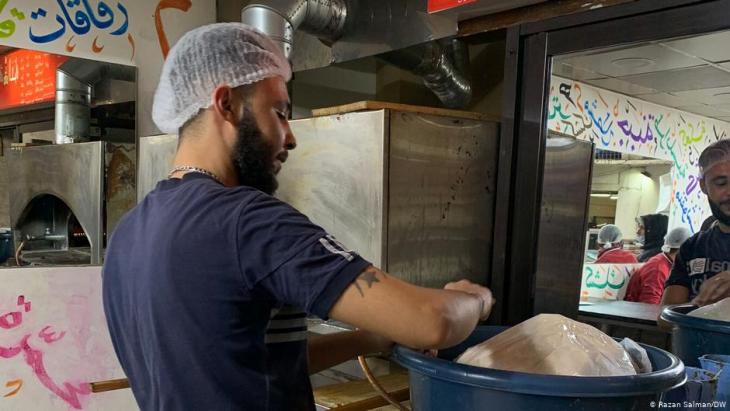 Astronomic inflation: the Lebanese pound has lost 80% of its value. According to Steve Hanke, professor of Applied Economics at the Johns Hopkins University and a central banking expert, the annual inflation rate recently rose 365%, the highest inflations rate in the world after Venezuela. According to the UN, 55% of Lebanese people now live in poverty – twice as many as last year. Pictured here: an employee at Mona Mallah's bakery in Beirut

Subsidies: not as good as they look

Surprisingly, and despite popular support for subsidies, there is a growing group that believes that Lebanon's subsidy system actually needs to be reconsidered.

"[Subsidies] are arguably not the best nor the fairest way of spending a very large amount of money to support households," Yukie Mokuo, UNICEF's representative in Lebanon, and Ruba Jaradat, regional director for the International Labor Organization, wrote in a December op-ed.

"Subsidies are not the solutions for addressing long lasting inequality and inequity in the country," Lebanon's Collective of Independent Social Protection Experts agreed, in a position paper also published in early December.

Until recently, subsidies cost the Lebanese government around $750 million (€613 million) a month, though cost-cutting this month reduced this to about $450 million.

But these subsidies are not direct payments. The Lebanese central bank, Banque du Liban, simply offers importers of certain goods a better exchange rate for US dollars. The subsidy is the difference between the official government exchange rate and the market rate, currently around six times higher.

For example, flour mill owners pay US dollars for imports of wheat. Because of the favourable exchange rate they're offered, around 85% of the cost of wheat is covered.

In November, the governor of Lebanon's central bank said they could only afford to cover another two months' worth of subsidies. The bank has not run out of money: in late August, it still apparently had $19.5 billion in foreign currencies. It's just that its own rules say it must keep a certain amount – around $17 billion – in reserve. 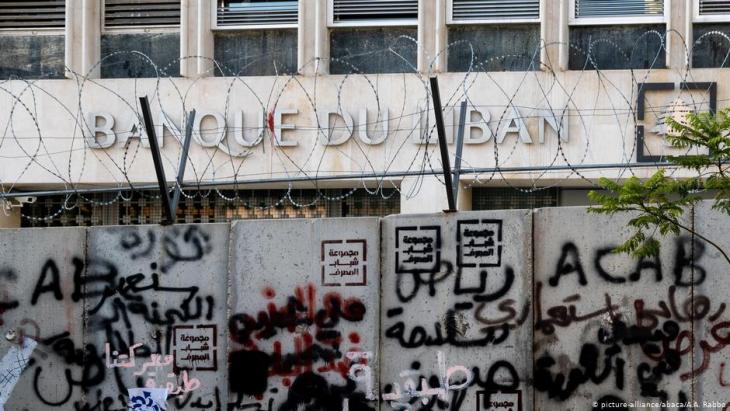 Teetering on the brink: over half of the population of Lebanon now lives in poverty. International donors want to help, but insist that Beirut has to act. But so far none of the pressure has had an impact: former president Hassan Diab is a caretaker leader, while the designated head of government, Saad Hariri, has not yet succeeded in forming a new cabinet despite being appointed to the office for a fourth time in October

Besides cutting costs, there has also been discussion about changing the rules to reduce that ratio and free up more money for subsidies. But foreign currency reserves are important for maintaining the value of local currency and the Lebanese pound has already devalued substantially over the past year.

So, is it worth it? The experts say no. Local market research company InfoPro Research reports that most subsidised products are not being consumed by Lebanon's poorest locals. For example, subsidized wheat is used to make bread. But it is also used to make croissants, pizzas and sweets — the kind of thing poorer families can't afford. And everyone puts fuel in their cars, whether rich or poor.

The crisis might even be making this inequality worse, as locals, fearing subsidies will end soon, hoard subsidised goods. Poorer Lebanese families can't afford to hoard anything.

There is also thought to be abuse, with importers known to stockpile subsidised goods and smuggle them over the borders, where they make bigger profits. For the corrupt, there's a lot of money at stake in the subsidy system, critics say.

Gilbert Doumit, a consultant from the Beirut-based Beyond Group, who has been working with both the Lebanese government and UNICEF on this topic, says there is no easy answer. "It's not about whether we remove the subsidies, or whether we keep the subsidies," he told DW. "It is about making sure we spend government money in the most efficient way, so it reaches the people in most need. Any immediate measures should be part of a comprehensive, universal-rights-based, long term plan." Lebanon needs a genuine social protection plan, he argues.

Besides the impact fewer subsidies would have on the country's most vulnerable, Marie-Noëlle AbiYaghi, director of local research institute, Lebanon Support, also worries about divisions in Lebanese society.

As the International Monetary Fund has pointed out, Lebanon has continuously spent less on a social safety net than other countries in the region and social welfare here tends to be informal, based on aid from family members or politically-motivated charities.

"If the subsidies stop abruptly, and without any social mitigation plan, it may lead to social tensions on the one hand and, on the other, could reinforce traditional political and confessional parties, through their networks of charities," AbiYaghi says.

Doumit points out that with just three months' worth of subsidies – he's talking about the previous monthly budget of $750 million – the country's health and education infrastructure could almost be rebuilt. "Lebanon's a small country, this is possible, But the problem right now," he concludes, "is that the political will isn't there to undertake those reforms."

Bassel Aridi and Razan Salman contributed to this report from Beirut.

Home
Print
Newsletter
More on this topic
Emigrating from Lebanon: Traumatised Beirutis ready to "leave for good" One month after the Beirut port explosion: "We sweep trauma under the carpet and carry on"Interview with Lebanese political scientist Bassel Salloukh: Will a new Lebanon arise from the ashes of Beirut?Beirut in crisis: Can things get any worse for the people of Lebanon?
Related Topics
Confessionalism, Coronavirus, Democracy and civil society, Economy, Health, Hezbollah, Humanitarian aid, Lebanese Civil War, Poverty, Rule of law
All Topics

Moncef Marzouki was Tunisia's first democratically elected president after the fall of dictator Ben Ali. Today he is the most prominent critic of increasingly counter- ... END_OF_DOCUMENT_TOKEN_TO_BE_REPLACED

Asef Bayat, professor of Sociology at the University of Illinois, Urbana-Champaign, has been studying revolutions and how they affect people since 1979. In his recent book, " ... END_OF_DOCUMENT_TOKEN_TO_BE_REPLACED

The 2020 Beirut port blast was a traumatic experience for many people in Lebanon. A large number sought therapy in the aftermath. But, with doctors leaving the country, help is ... END_OF_DOCUMENT_TOKEN_TO_BE_REPLACED

A pandemic, civil strife and an economic meltdown have conspired to bring Beirut's vibrant club scene to its knees. Yet the city needs parties more than ever. Kate Martyr reports END_OF_DOCUMENT_TOKEN_TO_BE_REPLACED

A group of 20 social media influencers in Lebanon is seeking to de-escalate political tensions and overcome sectarian problems. Their outreach is impressive among the young and ... END_OF_DOCUMENT_TOKEN_TO_BE_REPLACED

END_OF_DOCUMENT_TOKEN_TO_BE_REPLACED
Social media
and networks
Subscribe to our
newsletter