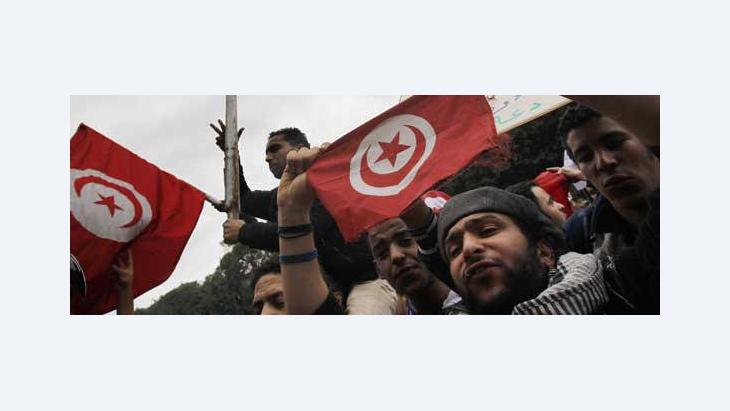 Education and Democracy in Tunisia

An Ideology-free Sphere in the Shadow of Dictatorship

﻿The curriculum in Tunisian schools and universities was remarkably progressive, even under the dictatorship of Ben Ali, because it wasn't exploited for political purposes. In an interview with Qantara.de, Najib Abdelmoulah explains to what extent the relatively good level of education led to the democratic revolt

Mr Abdelmoulah, you are active in the field of education as a cooperation partner with the Arab Institute for Human Rights. How long has human rights been taught in Tunisian schools and how did this programme develop?

Najib Abdelmoulah: Human rights act as a force against discrimination and promise people a dignified life. As such, human rights education in Tunisia has been offered since 1958 with the introduction of the country's first law on education. The law established equality in the area of school education. The principles of freedom, dignity, and equality are enshrined in many of its passages. The law from 1991 constitutes an important moment in the development of human rights education as it introduced compulsory education. In addition, civic education was first offered as an independent subject that has since been taught by teachers with training in law or philosophy.

What models were used by the curriculum developers and school textbook authors? 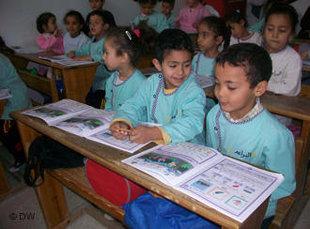 A progressive law on education under the dictatorship? Pictured: School children in class during the Ben Ali era

​​Abdelmoulah: The curriculum for schools in Tunisia primarily consists of various materials based on our Arab-Islamic heritage. However, texts in rationalist philosophy and from the Enlightenment belonging to this heritage are also selected. These works played a significant role in the development of the universal heritage of ideas and the history of European ideas. The second component of the curriculum comes from Western modernity. It includes works from the Italian Renaissance and the European Enlightenment. Since the founding of the Sadiqi School by Khair ad-Din Pasha in the 19th century even before Tunisian independence, Tunisian schools could claim to be enlightened. Graduates of the Sadiqi School played an important role in the liberation movement and in the establishment of the state after independence.

There are vast variety of references in Tunisian school books, both European and Arab, yet there are seldom any references to Ben Ali's governing party or to Islam. What kind of strategy lies behind this?

Abdelmoulah: Human rights are explained in Tunisian school books with the aid of European as well as Arab sources and thereby stress the tendencies of modernity via the contributions from both cultures. References to Islam are found only in books for Islamic education. Ben Ali's party was not a party of ideas or values, but was instead based on personal networks. The school book authors therefore had no need to make any particular reference to the governing party. There was no competition of ideas taking place here.

There were vast contradictions between the ideals of human rights education in the school books of the "Civic Education" programme and the political realities of the former regime. How can this be explained and how did the educational planners deal with this issue?

Abdelmoulah: It is normal that there are inconsistencies between ideal values found in school books and real life situations. The regime of Ben Ali had overlaid an understanding of rights with its corruption and repression. The curriculum was not, however, exploited for ideological purposes. The law on education bears testimony to respect towards others, their identity, dignity, freedom, and national as well as regional background, while simultaneously opening a horizon to the universal dimension of human rights. The law on education is progressive and framed outside of the dominant ideology of the day.

Do you see any connections between human rights education in schools and the overthrow of Ben Ali's regime? 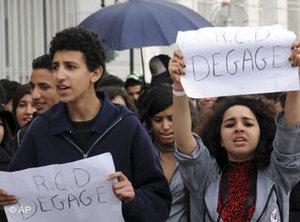 Opposed to authoritarian one-party rule and for democracy and equality in the sphere of education: Students in Tunis demand the dissolution of the RCD governing party as well as more rights in schools and universities

​​Abdelmoulah: There is only an indirect connection. The methodical education in human rights provided students with the ability to critically view things from various perspectives. They thereby learned to expose the falsehoods of the regime – falsehoods through which the regime attempted to position itself on the right side of events and hide its violations of human rights. As the dictatorship became unbearable, this provoked a strong reaction from all members of society.

To what extent is Tunisia a special case among Arab countries?

Abdelmoulah: In comparison to other Arab countries, Tunisia stands out in not being subject to confessional, ethnic, or religious divisions. Most of the population follow Sunni Islam. In addition, since independence in 1956, the state was established on a foundation of modern values. These values, for instance, have improved the situation of women through civil status and family law. Moreover, the general access to education has played a decisive role in changing mentalities. The Ben Ali dictatorship, however, prevented education and the freeing of women from truly bearing fruit.

What prospects for the future do you see for human rights education in Tunisia as well as in the Arab world as a whole? What barriers have to be overcome?

Abdelmoulah: What happened on January 14th in Tunisia was truly remarkable, because it broke down the wall of fear that prevented people from fighting the dictatorship. On the one hand, students were taught about freedom of expression, equality before the law, the supremacy of the constitution, and the independence of the justice system. On the other side, they could see real injustices. This situation led to a decline in public commitment by young people.

The situation today has changed. People feel that Tunisia is their country. Legal norms have regained credibility. Yet, every new change also entails difficulties. No longer is there any difference between the right to freedom and freedom in the everyday sense of the word. Freedom in its absolute sense can lead to anarchy and the violation of others' rights. The question that arises today is how to further develop an awareness of one's rights in civil society.

The citizens of Tunisia face important tasks – the establishment of a constituent national assembly and the carrying out of democratic elections. This requires a culture of aware commitment on the part of the public, the implementation of laws without corruption or falsification, and getting accustomed to control mechanisms aimed at preserving the common good.

Healthcare systems in Tunisia and Egypt are in a catastrophic state. The governmental response to the crisis in both nations could not be more different. Sofian Philip Naceur ... END_OF_DOCUMENT_TOKEN_TO_BE_REPLACED

Coronavirus continues unabated. Iran remains a hub of infection, war-torn Syria has recorded its first case and Yemen is bracing itself for the worst. Here’s the latest from ... END_OF_DOCUMENT_TOKEN_TO_BE_REPLACED

With borders closing and the opportunities for international travel shrinking by the hour, we take a look at coronavirus developments across the Middle East and the wider Muslim ... END_OF_DOCUMENT_TOKEN_TO_BE_REPLACED

As the global economy reels and everyday life grinds to a standstill, we take a look at the spread of coronavirus across the Middle East and the wider Muslim world – and the ... END_OF_DOCUMENT_TOKEN_TO_BE_REPLACED

Why are predominantly Muslim countries lagging behind when it comes to democracy and human rights? Dutch sociologist Ruud Koopmans uses a lot of figures to underpin his theory ... END_OF_DOCUMENT_TOKEN_TO_BE_REPLACED

While Tunisians remain committed to democracy, they are feeling the painful lack of economic and political progress. Much has been achieved in the way of personal freedoms, but ... END_OF_DOCUMENT_TOKEN_TO_BE_REPLACED
Author:
Susanne Kröhnert-Othman and Sarhan Dhouib
Date:
Mail:
Send via mail

END_OF_DOCUMENT_TOKEN_TO_BE_REPLACED
Social media
and networks
Subscribe to our
newsletter