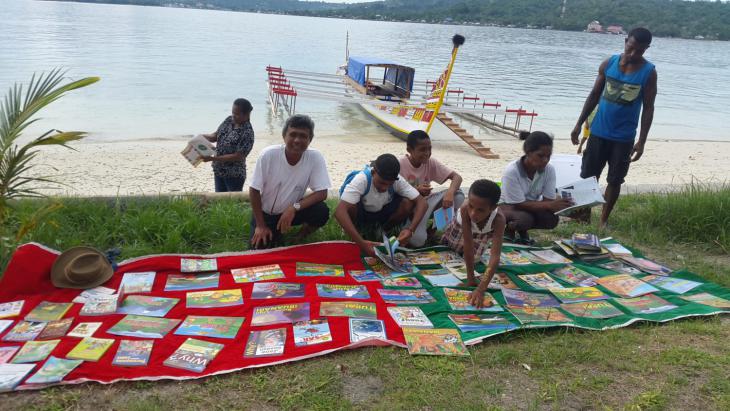 Education in Indonesia
Boatloads of books

Grassroots initiatives are ensuring that children have access to books in some Indonesian villages. Appreciation of books is rising in general. By Edith Koesoemawiria

Books need readers and even in our digital age, readers still need books. Novels, comics and other printed material are like doors for the mind. They help to expand knowledge, imagination and creativity.

Indonesia′s literacy rate is above 90 %, according to UNESCO and the World Bank. Yet in this country of 250 million people, writers complain that only few people read. They would like more people to have access to books.

In fact, books are expensive and often unavailable. Indonesia has 17,000 islands, some far more developed than others. For people in remote areas, it is much harder to get services, education and information than for those living in the cities. It is no different with books.

Sari Meutia from Mizan Publishing sees distribution as one of the major problems. She says: ″Although scholastic material is partially subsidised by the state, the distribution of other reading material, like novels, comics or special interest books is solely dependent on market dynamics.″ Bookstores in Indonesia generally sell on a consignment basis. Distribution thus involves costly postal and courier services to get books to their destination – and back, if they are not sold. The costs weigh heavily on publishers.

Transporting books and passing on knowledge

Various efforts are being made to rise to this challenge. Ridwan Sururi′s Pustaka Kuda (″horse library″), for example, is making a difference in Central Java. The young man relies on a horse to bring books to children in Java′s rural Purbalingga on Tuesdays, Wednesdays and Thursdays. His own school-aged daughter enjoys reading. He loves horses and wanted to reconcile his hobby with providing a service for the community. Thanks to his initiative, his daughter and other children in the area have access to books.

This idea came about while talking to Nirwan Arsuka, an essayist and editor, who also has a penchant for horses and was able to send him the books to start the library. Arsuka has similarly supported another rural library in West Sulawesi across the Java Sea.

Hailing from Sulawesi, Arsuka knows the limitations children face there. His heart went out to those living on the surrounding small islands, so he contacted activists and intellectuals and his idea literally took sail. A traditional cargo boat is used to carry books to the islands, as well as to up-river villages on Sulawesi. Junk boats of its kind were traditionally used to ship rice and other commodities. Children are attracted in hordes.

The boat′s captain is Muhammad Ridwan Alimuddin. He used to work as a maritime researcher, but has become a full-time librarian. He also uses a bike, a horse carriage and a motorbike to bring cases of books to village kids.

Small libraries are also mushrooming in other places in Indonesia. The focus is often on children. The libraries are run and supported by people who know that stories and books are a source of dreams and aspirations.

The promotion of literacy, creativity and public awareness has a tradition dating back to colonial times in Indonesia, but it ebbed under the Suharto dictatorship that lasted three decades, from the 1960s to the 1990s. In those dark years, books were burned and censored. Being found with printed material that the government did not approve of could mean imprisonment and torture. Books were burned, street libraries broken up and publishing companies raided. 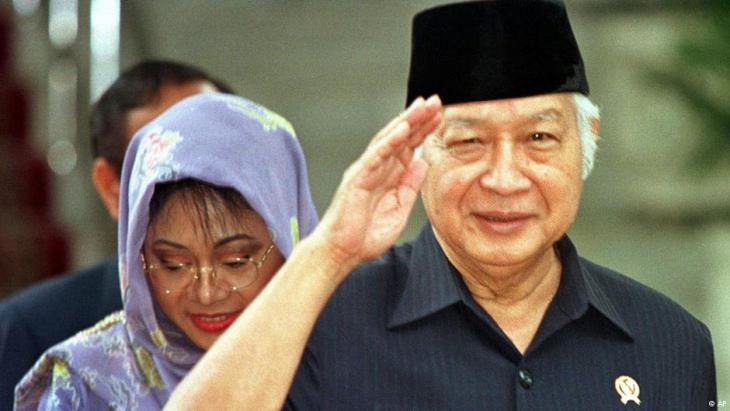 Literacy, creativity and education suffered considerably during the Suharto years. During this period books were burnt and censored

Since Suharto′s fall, cultural activities have been gaining momentum again. Some projects reach out to street children, some to village children, including ″Sokola Rimba″ in Sumatra, ″Rumah Dunia″ in West Java, ″Komunitas Kaki Abu″ in Papua or ″Rimba Baca″ in Jakarta. Many individuals privately travel to distant villages to donate books or organise creative workshops.

Film-maker Rony Sanjaya is one of them. He belongs to the civil-society group ″Ngibing″. The term means dancing, but is an acronym for ″frame filling″. He enjoys working with kids and adults: ″It is satisfying to see them gain confidence through drawing and creatively developing story lines in comic form.″

Publishers have jumped on the band wagon. Mizan publishing has started a programme that allows children to create their own books, for example. Adibintang and Zikrul publishing run writing classes for children.

The Ministry of Education and Culture recently launched a school literacy programme. It not only targets students, but also trains teachers to promote creativity. The idea is not simply to make people learn how to read and write, but actually encourage them to make use of these skills.

The government programme is still in its infancy. Hopefully, it will lead to a new mindset. To date, many people are still concerned that publications might tackle controversial historical issues or indecent sexual passages. On the other hand, young and old people alike are increasingly realising that books matter. The more one reads, the better one can decide for oneself.

Research project "The Global Qur'an", brainchild of Professor of Islamic Studies Johanna Pink and sponsored by the European Research Council, analyses the history and ... END_OF_DOCUMENT_TOKEN_TO_BE_REPLACED

At a time when even some rich democracies are electing con men as their political leaders, the success of Indonesian President Joko Widodo deserves wider acclaim and appreciation ... END_OF_DOCUMENT_TOKEN_TO_BE_REPLACED

On the Indonesian island of Java, one librarian has started a mobile library, lending books to children in exchange for plastic rubbish. The idea is that they will learn to take ... END_OF_DOCUMENT_TOKEN_TO_BE_REPLACED

Water buffalo and oxen have been part of the work in Indonesian fields for centuries. But the draught animals are no strangers to sport either, as can be seen in two traditional ... END_OF_DOCUMENT_TOKEN_TO_BE_REPLACED

According to the latest Reuters tally, more than 2.54 million people are now reported to have been infected by the novel coronavirus globally and 177,004 have died. As Muslims ... END_OF_DOCUMENT_TOKEN_TO_BE_REPLACED
Author:
Edith Koesoemawiria
Date:
Mail:
Send via mail

END_OF_DOCUMENT_TOKEN_TO_BE_REPLACED
Social media
and networks
Subscribe to our
newsletter