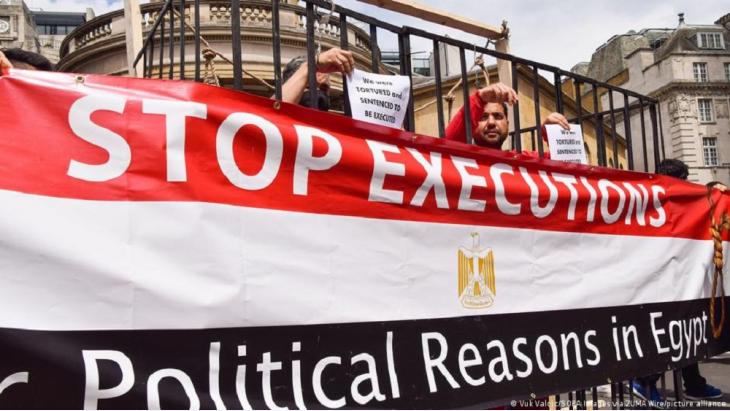 For years, EU states have held back from criticising Egypt’s military regime for its human rights crimes. NGOs and a European parliamentary initiative are now seeking to change that, urging the UN Human Rights Council to act. By Sofian Philip Naceur

Systematic police violence, torture in police custody, extrajudicial executions, arbitrary prison terms and other reprisals against journalists, opposition figures and activists and their families: while independent media and civil society are constantly muzzled and existentially threatened, the regime of Egypt's President Abdul Fattah al-Sisi continues to mercilessly crack down on any form of free speech critical of the government – and all this without any serious criticism from Brussels, Paris or Berlin.

International NGOs and the few Egyptian human rights organisations that still publicly oppose Sisi’s policies despite the ongoing threat of reprisals continue to report regularly on the countless human rights violations committed by Egyptian authorities in an attempt to at least raise public awareness about the human rights crisis in the county. But Sisi's allies in Europa and North America only seem prepared to criticise Egypt’s disastrous human rights record behind closed doors or – if at all – very quietly.

In Europe’s parliaments, however, tentative resistance is stirring against the silence of European officials. 175 members of the European Parliament and national European parliaments signed an open letter to the UN Human Rights Council (UNHRC), which was published on 3 February 2022. In it, they call on the UNHRC and the foreign ministers of its member states to set up a monitoring and reporting mechanism designated for Egypt at the upcoming session of the UN Human Rights Council in March. Such a step is "long overdue", the letter says.

A lack of political will

Compared to other attempts to condemn Egypt’s regime for its human rights abuses by the EU Parliament or at the UN, the letter does not mince words. Under Sisi, the Egyptian authorities rule with an "iron fist" and dissenting voices are "brutally and systematically" repressed. The letter condemns both the military and emergency courts that have been used by the regime for years, as well as the systematic torture employed by Egyptian police and intelligence agencies. 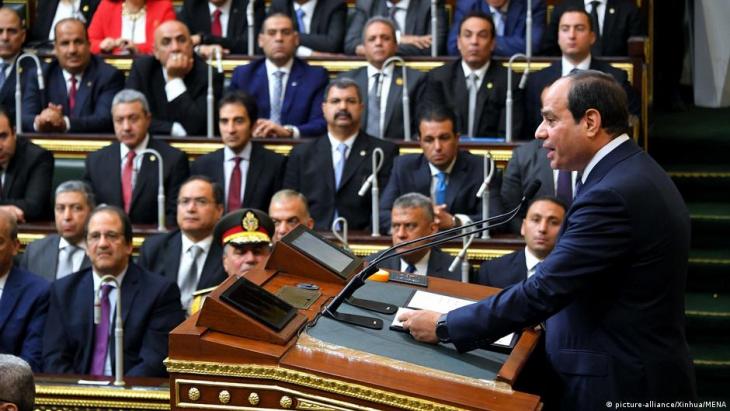 What human rights? The military regime of Abdul Fattah al-Sisi (pictured here in the Egyptian parliament) stands for systematic police violence, torture in police custody, extrajudicial executions, arbitrary prison terms and other reprisals against journalists, opposition figures and their families. So far, he has not had to fear any serious criticism from Brussels, Paris or Berlin. The new German government is expected to put an end to the status quo regarding its approach toward Egypt's military regime. Last year's outgoing administration approved arms exports worth 4.34 billion Euro to Egypt in 2021 alone – an all-time record

The international community has persistently failed to take any meaningful action to address Egypt’s human rights crisis, the letter reads. "This failure, along with continued support of the Egyptian government and a reluctance to even speak up against pervasive abuses has only deepened the Egyptian authorities' sense of impunity".

In this letter, the signatory parliamentarians are unusually upfront in attacking their own parties, especially those that have approved arms exports to the Sisi regime while in government and given Egypt political support in recent years. Cairo's poor human rights record has not prevented the EU "from handing unconditional military, political and economic support to Egypt’s abusive government," admits EU member of parliament and Spanish left-wing politician, Miguel Urban Crespo, to Qantara.

Alongside the EU, Spain’s Social Democrat-led government is yet another accomplice of the Egyptian regime. "In December, Pedro Sanchez became the first Spanish prime minister to visit Egypt since 2009. In his appearance with Sisi, Sanchez made no mention of human rights and assured that the two countries will strengthen their trade relations after his visit," Urban Crespo explains, slamming that this promotes economic interests over fundamental rights of the Egyptian people.

The seriousness of the open letter to the UNHRC should not be underestimated, however: it has been signed across several political parties and representatives of social democratic, green, left-wing and liberal parties. These parliamentarians are now expected to exert pressure on their own parties – especially those in government. The new German government is also expected to put an end to the status quo regarding its approach toward Egypt's military regime. Last year's outgoing administration under Angela Merkel approved arms exports worth 4.34 billion Euro to Egypt in 2021 alone – setting an all-time record.

This is another reason left-wing German politicians are currently appealing to the Social Democratic and Green parties to hold Egypt more accountable in the future. "I am pleased many of my Social Democratic and Green colleagues have signed the letter. In recent years they have always remained silent when their own foreign ministers and ministers of economic affairs have co-operated with or exported arms to the Egyptian regime," Ozlem Demirel, Euro MP for Germany's Die Linke, tells Qantara. Though she warns that, in terms of the ministries of foreign affairs and the economy now held by the Greens in Germany, there is a chance this policy could continue.

Meanwhile, Urban Crespo insists that the situation in Egypt is sufficiently serious for abandoning the strategy of "quiet diplomacy". "Since Abdul Fattah al-Sisi came to power in 2013, Egypt has become a human rights black hole," the left-wing politician says.

#Egypt is in a human rights crisis. Freedom of speech is being curtailed, dissidents oppressed, journalists mulled and the world is failing to react. Me and 174 signatories, from all over EU call on the @UN_HRC to establish a HR monitoring mechanism in Egypt. Join our call. pic.twitter.com/2QPO8bP4oo

More proactive intervention by the UN Human Rights Council is not unrealistic. At the last UNHRC session in 2021, Finland was already pushing a declaration in which dozens of states clearly condemned Egypt’s government for its human rights violations. "This set an important precedent. For the first time in seven years, states jointly addressed Egypt‘s human rights crisis at the UN," explains director of the Cairo Institute for Human Rights Studies' (CIHRS) Geneva office, Jeremie Smith.

Egypt did indeed react sensitively to the UNHRC statement, apparently taking multilateral action far more seriously than bilateral action and criticism raised behind closed doors. The question whether such a UN-level monitoring tool, called for by countless human rights groups and now also European parliamentarians, can be effective or not is disputed. But Egypt’s civil society is running out of time. "The stakes are high. If states fail to act, independent civil society in Egypt may be eradicated," urges Smith.

The Egyptian NGO has itself been a target of state reprisals. As recently as 2020, CIHRS Director Bahey eldin Hassan was sentenced to 15 years in prison by a Cairo terrorism court. While numerous NGOs are threatened with dissolution in light of Egypt’s new restrictive NGO law, the human rights organisation Arab Network for Human Rights Information (ANHRI) ceased its work entirely in January 2022 due to ongoing reprisals against the group by Egyptian authorities.

It is therefore small wonder that more than 100 human rights organisations had already signed a statement addressed to the UNHRC last year: "The inaction of Egypt’s partners and member states of the UN Human Rights Council has emboldened the Egyptian government to silence dissent and dismantle independent civil society altogether",  it reads. In the statement, the NGOs were already calling for the UNHRC to establish a monitoring instrument responsible for Egypt. If a majority is found at the upcoming UNHRC session, the demand could well be heard after all.

Read more on the human rights situation in Egypt

Egypt, Alaa Abd El-Fattah and democracy: "You have not yet been defeated"

Alaa Al Aswany on Egypt – "The Republic of False Truths"

The West and the Islamic world: The despotic temptation

Egypt hopes to jump-start the action needed to face a warming world when it takes the presidency of major UN climate talks in November, but warns that countries need a "reality ... END_OF_DOCUMENT_TOKEN_TO_BE_REPLACED

A ceasefire has been in effect in Libya for the past year and a half. Yet after Russia's attack on Ukraine, another proxy war looms in Africa's most oil-rich country. Mirco ... END_OF_DOCUMENT_TOKEN_TO_BE_REPLACED

It is the biggest order in the history of the Siemens Group: a 2,000-kilometre railway network for high-speed trains is to be built in Egypt. But the project raises numerous ... END_OF_DOCUMENT_TOKEN_TO_BE_REPLACED

Archaeologists have discovered 250 sarcophagi and 150 bronze statues during excavations in the necropolis on the western bank of the Nile. ... END_OF_DOCUMENT_TOKEN_TO_BE_REPLACED

The lack of grain supplies from Ukraine is forcing Egypt to act. Now even the Toshka project is being revived to grow grain in the desert. Birgit Svensson travelled to see it END_OF_DOCUMENT_TOKEN_TO_BE_REPLACED

END_OF_DOCUMENT_TOKEN_TO_BE_REPLACED
Social media
and networks
Subscribe to our
newsletter