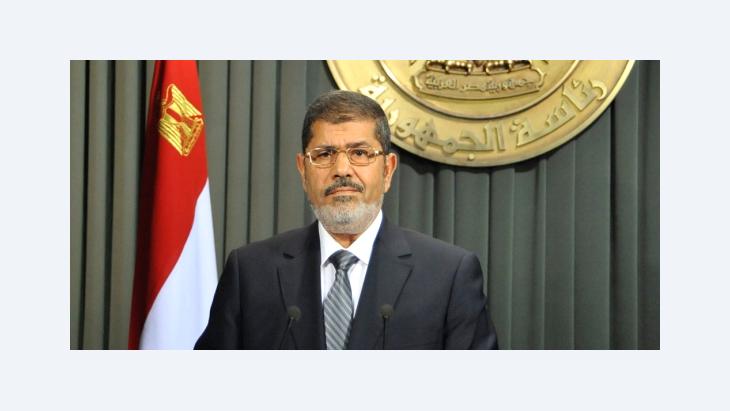 Egypt and Its New Constitution
A National Unity Government for Egypt!

Egypt is bitterly divided like never before. That doesn't take a genius to realize. But that's exactly what President Mohamed Morsi, his masters in the Muslim Brotherhood (MB) guidance bureau, and their far right Islamist allies have so far failed to come to grabs with, never mind Morsi's razor-thin victory in the country's first presidential elections.

As president, Morsi's first challenge was to bring his divided country together and to act as the President for all Egyptians, as he himself promised. Without missing a beat, he did exactly the opposite. He exacerbated the very deep and serious suspicions that many Egyptians have vis a vis the Muslim Brotherhood.

Time and time again, he chose to appease and to co-opt Egypt's deep-state rather than to bring fellow revolutionaries on board to shoulder the responsibility of bringing to life a faltering nation. 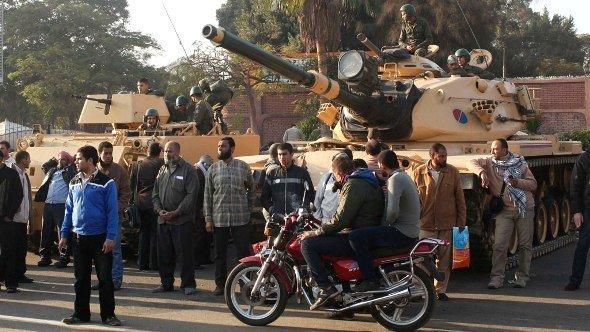 "This is certainly not how legitimacy is defended." Supporters of the Muslim Brotherhood stand near tanks that were deployed outside the Egyptian presidential palace in Cairo. Militant Islamists forcibly dispersed peaceful activists demonstrating against Egypt's constitution on 6 December

​​And now, by his doing, even the most basic demands of the ordinary Egyptian (that doesn't necessarily realize that he/she has a major stake in the current constitutional conundrum) are held hostage to the completion of the Muslim Brotherhood's power grab.

The executive played off against the judiciary

Morsi is the legitimate President of Egypt. Let's get that very clear at the outset. That, however, does not mean that we Egyptians should sit idly watching our democratically-elected President overstep his authority or resort to undemocratic means. That is true of his Reichstag moment, in which he placed his executive and legislative actions beyond judicial review.

Morsi's Islamists supporters – and shockingly many Western commentators –want us to accept that Morsi's decision had the country and its revolution's best interest in mind. Well, we don't. After all, our revolution was not about bringing down a dictator to have another one replacing him, even temporarily. That message, one would have thought, has been made loud and clear during 18 eventful days in 2011 and all through the two years that followed. Apparently, some were not listening. Well, they should now.

Moreover, Islamists – and again shockingly a whole bunch of Western commentators –want the rest of us to accept a flawed constitutional draft - prepared by an unrepresentative committee - one that fails terribly short of guaranteeing our most basic rights and freedoms, let alone the aspirations of our revolution, as the legitimate outcome of a democratic process. Well, wrong again.

In a political environment devoid of rules (thanks in no small part to the lousy transitional path that we have taken ever since Mubarak's downfall), where government authorities are pitted against each other in a fight that bloodies all (the executive vs. the judiciary in this case), and where institutions that should sit on the sidelines of politics, like the military, are either invited (or invite themselves) to interfere, the constitution and the process of drafting it could have really helped restoring confidence between the various factions and setting the rules of the game.

"Liberal and secular forces in Egypt were right to want to fight to the very end against Morsi's constitution, even now the outcome proves bitter for them." But, says Ashraf Swelam, just as important is the upcoming parliamentary election. The graffiti reads: 'The constitution does not include us"

​​Unfortunately, that's an opportunity that has now been missed, absent a major change of fortunes.

From the moment it was clear that Islamists are the biggest winners of the Arab Spring, the one question looming heavily on the minds of everyone was about their true colors. Will they play by the democratic rules or is it – as many have speculated – a case of one man, one vote, one time? Many have rushed to the conclusion that it is the former.

Not so fast. The crisis unfolding in Egypt should actually give everyone a pause. The scene of arms-wielding militia-like members of the Muslim Brotherhood dispersing peaceful protestors in front of the presidential palace, leaving behind a dozen killed and hundreds wounded, isn't exactly how legitimacy is defended. Encircling the Supreme Constitutional Court – the highest court of the land – preventing its judges from entering their halls or ruling on the cases before them, is anything but rule of law.

The opposition must mobilize voters

Blocking entrances to Cairo's Media City, home to most of Egypt's independent network stations, in anything but freedom of press and speech. As a result of such images, and in less than six months of his presidency, Morsi's legitimacy is suddenly on the line, eroding faster than anyone would have thought, as millions - many of whom had voted him to power - are back on the streets demonstrating against him; some even asking for his downfall (prematurely in my opinion, which might very well change in the next few hours).

The way out of the current crisis is clear. Mohamed Morsi should postpone the referendum on the flawed constitution, and call for a meaningful dialogue with the opposition. The agenda of such dialogue should address not only the constitution and the parliamentary elections, but also the composition of a national unity government. So far, Morsi has chosen a different route.

On their side, Egypt's liberals and seculars are right to fight the constitutional battle to the end, even if they end up losing, but equally important is the parliamentary election.

The challenge ahead for the National Salvation Front, the umbrella organization comprising Egypt's opposition parties, is to turn its now-proven ability to fire up hundreds of thousands of protestors, into a ground operation that drives supporters to the ballot box. Many liberals, including this writer, believe that the majority of Egyptians are against the theocratic state the MB, and more so its Salafi allies, want to build. But absent electoral victories to support that claim, the Egypt that we dreamt of will be decades away.

Ashraf Swelam served as advisor on policy and economic issues to the former Egyptian presidential candidate Amre Moussa. He teaches as guest lecturer at the American University in Cairo. He worked as a diplomat and later headed Egypt's International Economic Forum, an NGO focusing on economic reform and business development.

Home
Print
Newsletter
More on this topic
Referendum on the Constitution in Egypt: Resistance from the ''Cradle of the Revolution''Constitutional Referendum in Egypt: The Islamists' Pyrrhic VictoryEgypt's Opposition Leader Sabahi: ''The Spirit of the Revolution Will Be Trampled Underfoot''
Related Topics
Arab Spring, Arabellion, Democracy and civil society, Egypt Revolution 2011, Islamism | Political Islam, Mohammed Morsi, Muslim Brotherhood, Power struggle in Egypt
All Topics

Alaa Abd el-Fattah, arguably Egypt’s most prominent democracy activist, has just been handed another lengthy prison sentence. Despite this, a book of his writing has recently been ... END_OF_DOCUMENT_TOKEN_TO_BE_REPLACED

People in Arab countries have been talking more openly about sex and sexuality for some time now, especially on social media. And for the first time ever, they have the vocabulary ... END_OF_DOCUMENT_TOKEN_TO_BE_REPLACED

A prominent rights group in Egypt, the Arabic Network for Human Rights, is ending operations just as the country braces for a controversial NGO law. Is this the beginning of the ... END_OF_DOCUMENT_TOKEN_TO_BE_REPLACED

Moncef Marzouki was Tunisia's first democratically elected president after the fall of dictator Ben Ali. Today he is the most prominent critic of increasingly counter- ... END_OF_DOCUMENT_TOKEN_TO_BE_REPLACED

Asef Bayat, professor of Sociology at the University of Illinois, Urbana-Champaign, has been studying revolutions and how they affect people since 1979. In his recent book, " ... END_OF_DOCUMENT_TOKEN_TO_BE_REPLACED

Every year in December, the team at Qantara.de takes a look back at the articles that proved most popular with our readers. This year is no different. Here is a run-down of the ... END_OF_DOCUMENT_TOKEN_TO_BE_REPLACED
Author:
Ashraf Swelam
Date:
Mail:
Send via mail

END_OF_DOCUMENT_TOKEN_TO_BE_REPLACED
Social media
and networks
Subscribe to our
newsletter