After the overthrow of President Hosni Mubarak and the coup against his successor, Mohammed Morsi of the Muslim Brotherhood, many Egyptians were relieved and delighted that Abdul Fattah al-Sisi was at the helm. Civil society, however, has paid a high price. By Diana Hodali 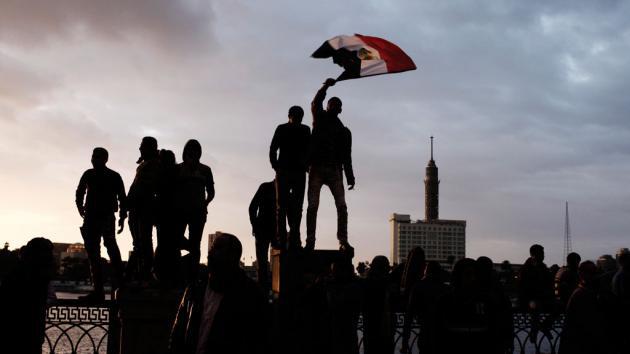 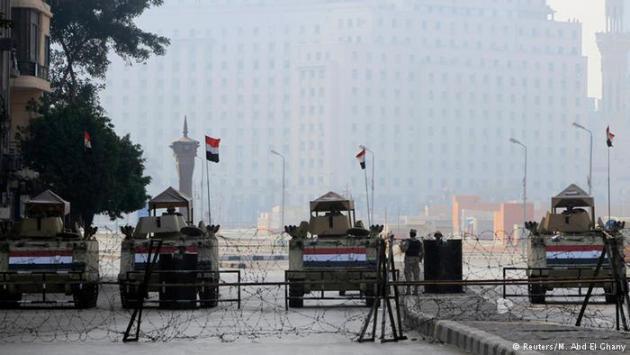 Sunday, 25 January marked the fourth anniversary of the start of protests against the long-ruling authoritarian leader Hosni Mubarak. Over 800 people died during the 2011 rebellion. Four years on, there were no commemoration ceremonies for the dead on the day of the anniversary. Quite the opposite: the government completely cordoned off Tahrir Square (see above) and banned all demonstrations – for security reasons, it said. 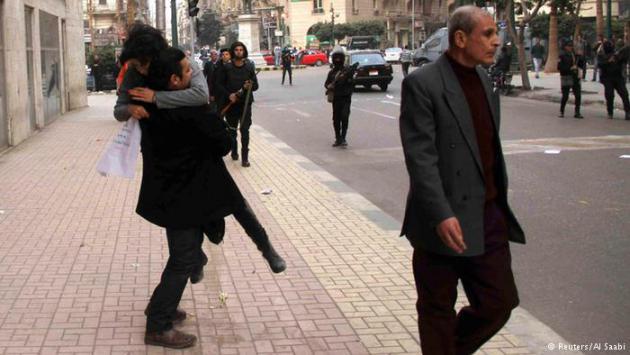 This photo, which was taken on the weekend of the fourth anniversary of the revolution, will forever be associated with this anniversary. It shows Shaima Al-Sabbagh being carried away from the scene of her shooting. She and others were on their way to Tahrir Square to commemorate those killed in the 2011 uprising when she was shot from behind. Demonstrators blame the police; the Ministry of the Interior issued no details except to say that an unnamed 'armed person' was to blame. 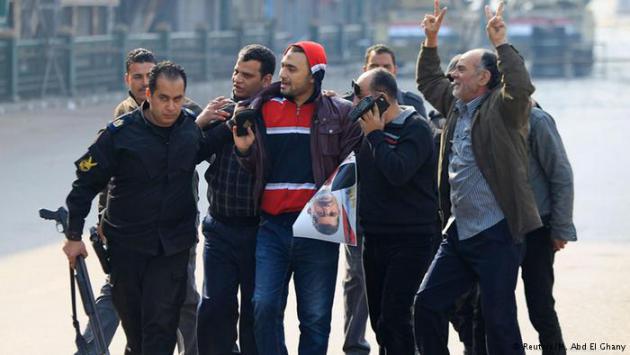 Muslim brotherhood supporters being led away: freedom of expression and assembly, for which the protest movement fought, have also fallen victim to rigid suppression. A controversial law on demonstrations forbids spontaneous rallies. Civil society activists who belong to the generation that led the revolution in 2011 and members of the Muslim Brotherhood alike have been arrested and imprisoned on a massive scale. 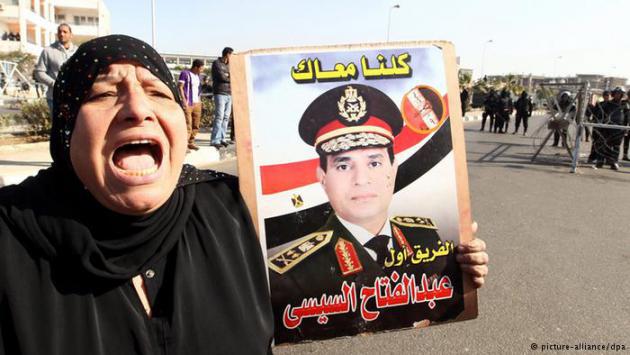 The hopes raised by the revolution in 2011 were immense. The overthrow of Mubarak led to Egypt's first free elections and a new constitution. Mohammed Morsi of the Muslim Brotherhood was elected president. Often heavy handed and sometimes autocratic, he provoked mass protests. In 2013, he was ousted by army chief Abdul Fattah al-Sisi, who was then elected president. 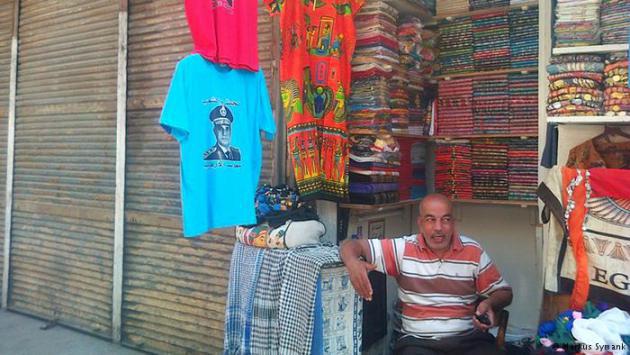 Many Egyptians hope that President Sisi will lead them out of the economic crisis and restore security. However, many human rights activists fear that his election will result in the end of democracy and a return to dictatorship in Egypt. 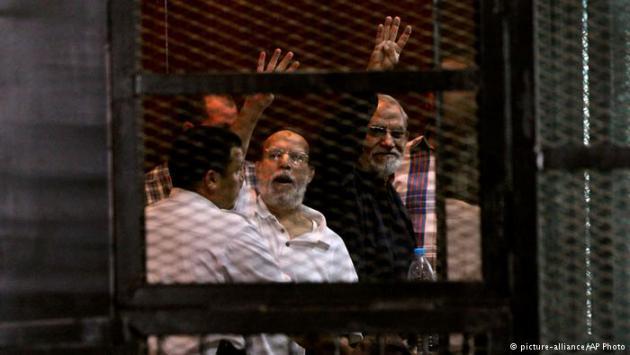 Members of the Muslim Brotherhood behind bars: even before his election, Sisi had the Muslim Brotherhood placed on the list of terrorist organisations. In March, a court in Al-Minja sentenced 529 supporters of the organisation to death. At a subsequent trial in April, the judges handed down a further 683 death sentences. Most were later commuted to life sentences; some cases are being retried. 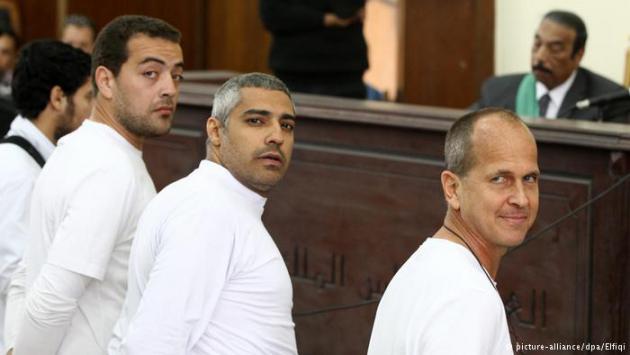 General crackdown: by putting pressure on homosexuals and atheists, the authorities are seeking to demonstrate their religious morals and credentials. Moreover, hundreds of activists are currently behind bars. Many lawyers and journalists have also been arrested without charges and often for no discernible reason. Such is the plight of the journalists pictured here, who work for the Qatar-based broadcaster Al Jazeera. 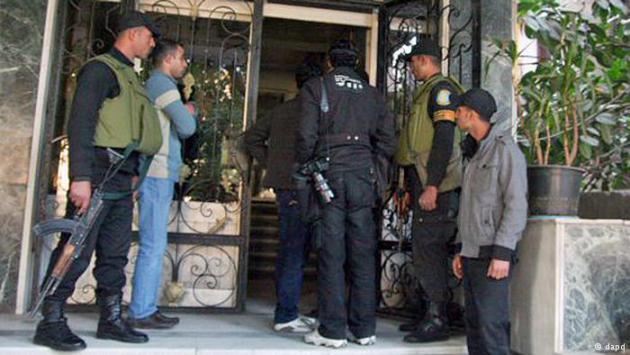 Egyptian military police search the offices of an NGO in Cairo. President Sisi has enacted a number of laws to further weaken civil society. In particular, he has tightened criminal law. Accordingly, organisations can be charged if they receive funding from abroad and thereby harm the interests of the Egyptian state. During the Mubarak era, similar laws gave the government carte blanche to silence undesirable NGOs. 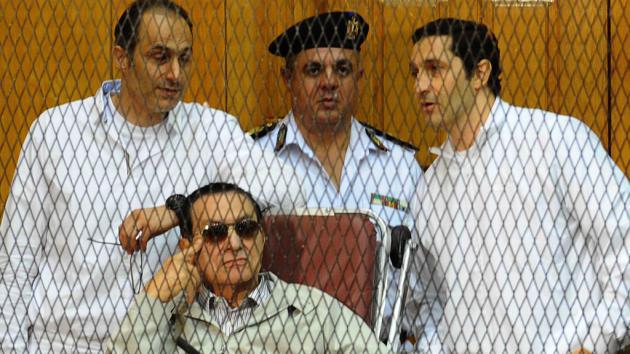 Hosni Mubarak and his sons in court: Late last year, an Egyptian court decided to drop charges against the former president over the killing of hundreds of demonstrators during the Tahrir Square revolt in January 2011. The sons of the deposed Egyptian president, Alaa and Gamal Mubarak, were released from prison on the day after the fourth anniversary of the uprising, pending their retrial on corruption charges.

END_OF_DOCUMENT_TOKEN_TO_BE_REPLACED
Social media
and networks
Subscribe to our
newsletter