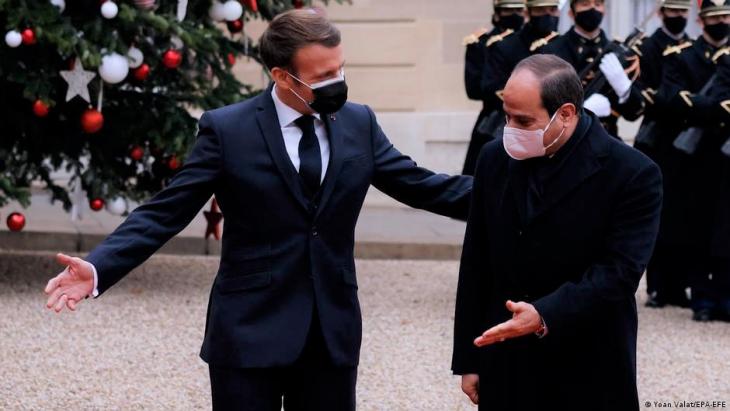 A growing alliance between Cairo and Paris is resulting in significant foreign policy coordination, with political and economic repercussions on the horizon for both Egypt and France. By Maged Mandour

On 21 November, the French NGO Disclose leaked a set of classified French intelligence and military documents, which revealed an extensive alliance between the French state and the Egyptian government. The leak, dubbed the "Egypt Papers", had two major revelations: the first was regarding Operation Sirli, which began on 13 February 2016, in the Western Desert close to the Libyan border.

According to the documents, French intelligence officers, pilots and technicians embedded themselves within the Egyptian Armed Forces with the declared purpose of combatting suspected militants infiltrating the 1200 km border with Libya. The leaked papers also revealed that the operation also led to human rights violations, a fact that was corroborated by local media reports, which documented a case where three civilians were killed in an airstrike in the Western Desert in July 2017, as well as the killing of 21 Mexican tourists in 2015, also in an airstrike, in the Western Desert.

The second revelation revolves around the deployment of the highly advanced electronic surveillance systems Nexa Technologies, Ercom and Suneris, and Dassault Systemes – all of which are French companies. The sale was approved, in 2014, by the French Ministry of the Economy, headed at the time by now-President Emmanuel Macron.

The alliance between the French state and the Egyptian government is based on a complex set of financial interests, parallel foreign policy objectives and ideological affinities. Most notably, these shared financial interests include massive arms deals between Cairo and Paris.

Between 2016-2020, French arms exports increased by 44 percent compared to 2011-2015, with Egypt receiving 20 percent of French arms exports – making it the second-largest customer for French arms after India. The costliest purchases so far have been French Rafale jets, purchased in two major arms deals in 2015 and 2021, worth 5.2 billion EUR and 4.5 billion EUR respectively. 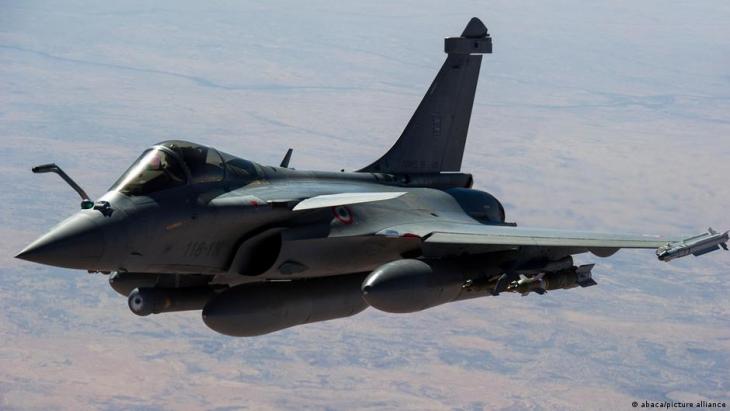 Massive arms deals between Cairo and Paris: "Between 2016-2020, French arms exports increased by 44 percent compared to 2011-2015, with Egypt receiving 20 percent of French arms exports – making it the second-largest customer for French arms after India," writes Mandour. "The costliest purchases so far have been French Rafale jets, purchased in two major arms deals in 2015 and 2021, worth 5.2 billion EUR and 4.5 billion EUR respectively"

At the expense of Egypt's lower and middles classes

The structure of these arms deals is also worth noting: some of the largest arms transfers are financed through French loans, including a 3.2 billion EUR loan in 2015, as well as an undisclosed loan to finance the latest 4.5 billion EUR deal in 2021. The regressive nature of the Egyptian tax system, where the tax burden is shouldered by the lower and middle classes, means that this arrangement is effectively transferring wealth from the lower and middle classes to the French arms industry.

It also means that besides profits from the arms deals, interest payments provide another avenue of profit for French creditors, including the French state. The importance of these arms deals to the French state was reflected in the dominance of the French military, rather than the French foreign ministry, in managing the state’s relationship with the Egyptian government.

This pattern of financing is not limited to the arms deals, with France investing 4.6 billion EUR in the Egyptian government’s infrastructure projects. The deal was signed on 14 June and it includes 800 million EUR in government loans, 1 billion from AFD – the French Development Agency – and 2 billion EUR in bank loans guaranteed by the French state. The projects are to be executed by French companies.

In addition to facilitating capital flows and wealth transfer to France, France and Egypt have similar foreign policy objectives, most notably in Libya. Both parties have provided support to the Libyan general and now presidential candidate Khalifa Haftar in his effort to wrest power from the Government of National Accord (GNA) in Tripoli, which was at the time the internationally recognised government in Tripoli (between 2019-2020).

This policy, among other factors, exacerbated the country’s civil war and emboldened the general to attempt seizing Tripoli by force, which ultimately backfired as a result of heavy Turkish intervention in January 2020. 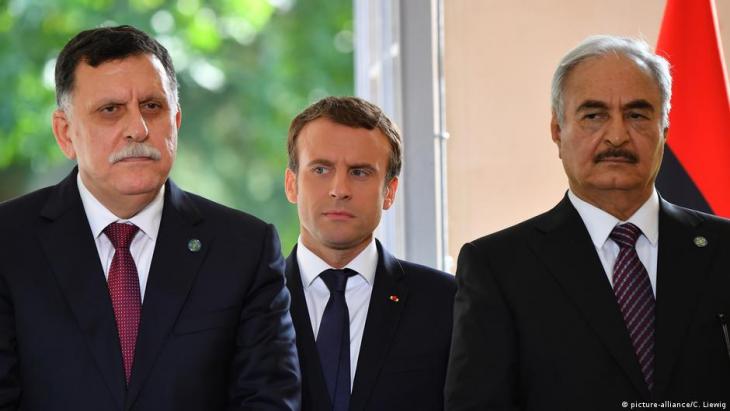 Both France and Egypt provided support to the Libyan general and now presidential candidate Khalifa Haftar (seen here on the right) in his efforts to wrest power from the Government of National Accord (GNA) in Tripoli, which was Libya's internationally recognised administration between 2019 and 2020

The two allies are also strongly opposed to the Turkish presence in Libya; after Haftar’s defeat at Tripoli, Egyptian President Abdul Fattah al-Sisi threatened direct military intervention and proclaimed that any attempt by Turkish-backed GNA forces to seize the city of Sirte would be crossing a red line for Egyptian national security.

This sentiment was echoed by Macron, who stated in June 2020 that France "will not tolerate Turkey’s role in Libya", and called for Turkey to withdraw its troops. It is worth noting, however, that Egyptian-Turkish relations have since shown signs of improvement. Despite this cooling of tensions, however, Turkey has rebuffed calls by Sisi and Macron to withdraw foreign troops from Libya. The results of the rapprochement remain unclear and a softening of positions remains a looming possibility.

United in their desire to "reform" Islam

Finally, both Macron and Sisi have shown a remarkable ideological resemblance regarding their desire to "reform" Islam and, by extension, their staunch opposition to political Islam. Interestingly, they both aim, within different contexts, to appropriate politicised Islamic discourse and bring it under state control. For example, in October 2020, President Macron called Islam "a religion in crisis", while proclaiming his government’s intent to issue a law for combatting "Islamic separatism".

This was followed by the issuance of a law in December that strengthens the state’s oversight over schools, mosques and sports clubs, allowing public officials to close mosques and dissolve religious organisations without a court order. Even though Islam is not mentioned explicitly in the law, there is little doubt that it targets French Muslims. This change in policy should be seen in the context of growing competition between Macron and the far right in the sphere of identitarian politics – more specifically that of which concerns immigration, minorities and the place of Islam and Muslims in France.

On the other hand, President Sisi has repeatedly called for Islamic renewal in an attempt to consolidate the government’s control over religious discourse and eliminate competing centres of social power: namely, the Al-Azhar, the leading religious institution in the country. The government’s attempts to exert control over religious discourse can be understood within the context of its attempt to centralise social power and create a state-sponsored version of Islam anchored in a deeply conservative social ethos. 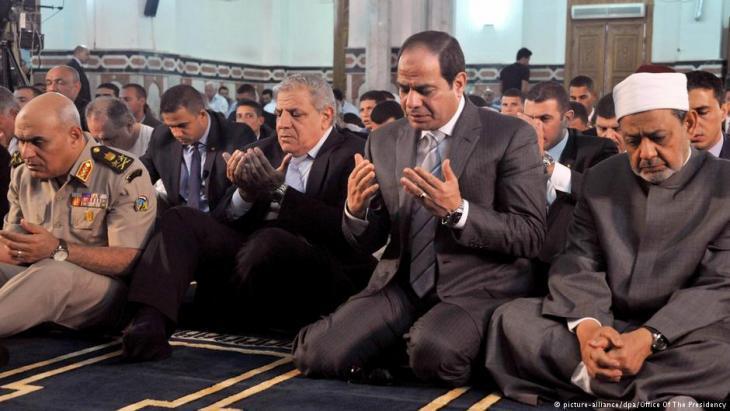 Remarkable ideological congruence: Egyptian President Sisi's attempts to exert control over religious discourse are intended to centralise social power and create a state-sponsored version of Islam anchored in a deeply conservative social ethos. For his part, France's Emmanuel Macron has set out to combat "Islamic separatism" by strengthening the state’s oversight over schools, mosques and sports clubs, allowing public officials to close mosques and dissolve religious organisations without a court order

Even though the context is different, this ideological congruence is remarkable, as it partially clarifies the ideological justification for French support of a government with an atrocious record of human rights violations.

The consequences of the alliance between Macron and Sisi may threaten the long-term regional stability of both the Middle East and North Africa and Europe. French support for the Egyptian government does not reduce repression and contributes to the impoverishment of Egypt's middle and lower classes.

It is also important to note that the alliance between Sisi and Macron is part of a wider European policy, with countries like Italy and Germany following very similar routines in terms of arms exports and financial dealings, albeit in less blatant fashion.

These relations, if predicated on a policy of ignoring human rights violations and economic pressures, will only risk increasing social unrest, violent radicalisation and possibly encourage refugee flows due to worsening repression and deteriorating living conditions.

Maged Mandour is a political analyst and writes the “Chronicles of the Arab Revolt” column for Open Democracy.

The devaluation of the Egyptian pound combined with rising food prices is taking its toll on Egypt. More and more people are slipping into poverty. Karim El-Gawhary reports from ... END_OF_DOCUMENT_TOKEN_TO_BE_REPLACED

Egyptian Sufis have been on the defensive against the country's Islamists for decades. Meanwhile, interest in mysticism is growing among the young members of Cairo’s middle and ... END_OF_DOCUMENT_TOKEN_TO_BE_REPLACED

Abortions are illegal in Egypt unless they are necessary to save a married woman's life. But that doesn't stop local women from having one. Egyptian society needs to acknowledge ... END_OF_DOCUMENT_TOKEN_TO_BE_REPLACED

Food prices doubled, salaries halved, banks restricting withdrawals: Egyptians now have the same problems as the Lebanese. But if things get worse here, the fallout will be far ... END_OF_DOCUMENT_TOKEN_TO_BE_REPLACED

Giessen, Eichsfeld, Kusel, Berlin – cars bearing old German number plates are the latest trend on the streets of Cairo. Many Egyptians regard the discarded plates as chic. What ... END_OF_DOCUMENT_TOKEN_TO_BE_REPLACED

END_OF_DOCUMENT_TOKEN_TO_BE_REPLACED
Social media
and networks
Subscribe to our
newsletter