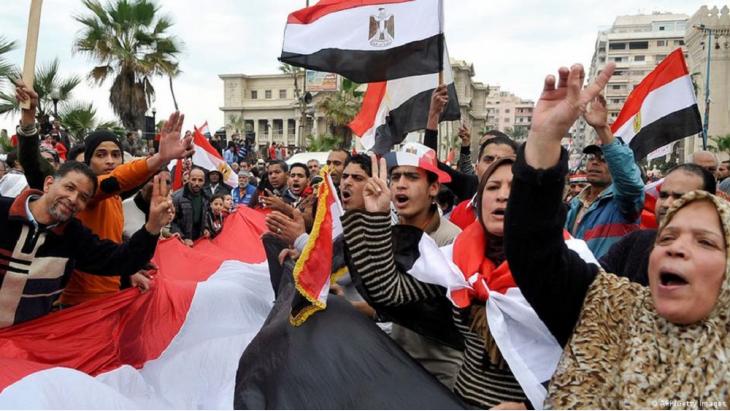 Egypt
The revolution did not fail

Ten years ago, the Egyptians overthrew ruler Hosni Mubarak. Although this did not bring them more freedom, they did gain something. An essay by Andrea Backhaus

There is a scene in the movie The Square that aptly portrays the state of affairs in Egypt today. The activist Ahmed Hassan is seen walking through the streets of Cairo, telling in a voiceover of life under the dictatorship. It is an undignified and unjust life, with no hope of a better future. He describes oppression under a ruthless regime and dictator. "The regime," Hassan says, "has always worked against the people, tormenting them, torturing them with electric shocks, beating them with extreme brutality."

Oppression by a police state is part of everyday life in Egypt today under the dictator Abdul Fattah al-Sisi. But Hassan is not speaking of the situation today – the film is ten years old. Rather, he is recounting exactly what many Egyptians found they could no longer bear back in January 2011 – and what drove them to revolt.

The documentary The Square, released in 2013, portrays the events of the Egyptian revolution from the point of view of the activists, among them Ahmed Hassan. The film documents an era when people from Tunis to Sanaa rose up against their oppressors. It is an ode to Cairo's Tahrir Square, which has become a powerful symbol. A symbol of the courage of those who peacefully fought for a better Egypt and paid a high price for their boldness. Hassan remembers in the film being overwhelmed when he went out onto the street: "Everyone felt what I felt."

We see tens of thousands of women and men pouring into the square, shouting: "The people want an end to corruption!" Police officers break up the crowd, shooting at the protesters. Civilians fall to the ground or are pulled by their companions out of the line of fire.

Watching these scenes today, it is easy to get the feeling that there is no escape in Egypt from the cycle of oppression, rebellion, crackdown and more oppression. And yet, these images also attest to what is possible.

Talking to Egyptians about those days of turmoil in early 2011, which began on 25 January and culminated on 11 February with the resignation of Hosni Mubarak, many recall above all the feeling of being united as one people fighting together for "bread, freedom and social justice". And they remember how, at least for a brief moment, all social and political divides were overcome.

Back then, the demonstrators who set up tents and stages in Tahrir Square included women with and without headscarves, men wearing traditional garb and others in business suits or work clothes. They all ate and sang protest songs together. When Vice President Omar Suleiman announced Mubarak's resignation on 11 February 2011, they cried and yelled, united in their relief, shot fireworks into the evening sky and waved the Egyptian flag.

They thought they had succeeded. But they were mistaken.

Attitudes toward the military divide society

After Mubarak stepped down, the Supreme Council of the Armed Forces (SCAF) took control. At first, the army posed as protector of the demonstrators, but that quickly changed. Instead of transferring power to a civilian government without delay as promised, the military gained more and more influence and postponed parliamentary and presidential elections. Revolutionaries who continued to take to the streets campaigning for more co-determination were beaten down with clubs. The soldiers tormented the female demonstrators with pointless virginity tests – ordered by Field Marshal Abdul Fattah al-Sisi, today president of the country.

In June 2012, the leader of the Muslim Brotherhood, Mohamed Morsi, won the presidential election. It was the first democratic election in Egypt, but it brought to power a president who would not govern democratically. He set out to elevate religion to state doctrine. Many mocked the inept autocrat, but others feared that society would regress.

Morsi's term in office was marked by a constant power struggle with the military, which secured ever-greater authority and finally staged a coup in the summer of 2013, unseating Morsi with the support of the populace. For many Egyptians, the army appeared to offer deliverance from the Islamists, while the future President Sisi took on the aura of a saviour. Sisi quickly made clear, however, just how he would deal with his enemies: persecute, arrest, destroy. His motto: whoever is not with me is against me.

In August 2013, police and security forces raided Rabaa al-Adawiya Square in Cairo. Supporters of the Muslim Brotherhood had set up a tent camp there from which they protested for weeks against Morsi's ouster. In the end, more than 1,000 people were dead and thousands injured. According to Human Rights Watch, the Rabaa massacre was one of the most horrific mass executions of demonstrators in recent history.

The brutality of the military regime soon divided Egyptian society, with supporters and opponents irreconcilably opposed. The rift also ran through the very same group of the secular democracy movement that had been instrumental in launching the 2011 revolution. Many of the former Tahrir activists felt betrayed by one and all: by the military council, by Morsi, by the Salafists, who had first gone along with the demonstrators but then made pacts with the military, and finally by the military itself, which under Sisi became more influential than ever before.

The truth is that quite a few of the revolutionaries supported the military for a long time, even after its vicious actions against supporters of the Muslim Brotherhood. Some Egyptian intellectuals, leading figures of the revolution, were incited in part by their hatred of the Muslim Brotherhood, writer Alaa Al Aswany, for example. And many liberals did not realise how dangerous Sisi was until he began to crack down on them as well.

People like Alaa Al Aswany are today bitter opponents of Sisi. The democracy movement did not succeed in converting the protests into a political agenda, nor was it able to mobilise Egyptians who were not as cosmopolitan, well-educated and comparatively wealthy as its members. And yet those in the movement risked their lives so that they and their fellow citizens could live in dignity. Many are still doing so today.

Since President Abdul Fattah al-Sisi seized power in Egypt in 2013, he has ruled the country with an iron fist. Civil society, opposition and free press struggle to survive. Tens ... END_OF_DOCUMENT_TOKEN_TO_BE_REPLACED

The lack of grain supplies from Ukraine is forcing Egypt to act. Now even the Toshka project is being revived to grow grain in the desert. Birgit Svensson travelled to see it END_OF_DOCUMENT_TOKEN_TO_BE_REPLACED

In this unusually beautiful book of images and text, published in German and Arabic, artist Marianne Manda presents her own unique take on the megacity of Cairo. In over fifty ... END_OF_DOCUMENT_TOKEN_TO_BE_REPLACED

A stage, lights, a mesmerised audience: it looks like an Egyptian folkloric concert, but Umm Sameh is singing to heal the sick by driving out the demons that possess them END_OF_DOCUMENT_TOKEN_TO_BE_REPLACED
Author:
Andrea Backhaus
Date:
Mail:
Send via mail

END_OF_DOCUMENT_TOKEN_TO_BE_REPLACED
Social media
and networks
Subscribe to our
newsletter