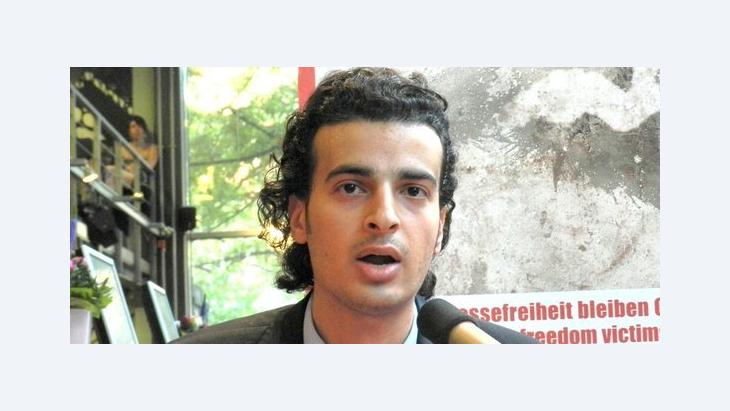 Egyptian Blogger Maikel Nabil Sanad
''The Elections Are a Deception''

"The presidential elections are not free and democratic," says Egyptian human rights activist Maikel Nabil Sanad, who was arrested and imprisoned and freed in January following widespread international protest. By Bettina Marx

At an event organized by Reporters Without Borders and Amnesty International in Berlin last Wednesday (23 May), the 26-year-old blogger sketched a gloomy picture of the situation in his country 15 months after the spectacular ousting of President Hosni Mubarak.

"The elections in Egypt are a deception," says Nabil. "They are trying to convince the public and the international community that the people have the choice. But in reality the military decides who the president is."

The Supreme Council of the Armed Forces, which has ruled the nation on the Nile since the forced resignation of Mubarak on 11 February 2011, determined who was allowed to stand in the elections, says Nabil. This in effect rules out a completely free poll, he adds. In addition, even a president elected with a large majority can be deposed at any time by the generals and made to appear before a military tribunal. Even after the elections, the military remains the definitive force in Egypt, says Nabil.

Omnipotence of the military council

"The elections took place in an atmosphere of oppression," says Nabil and recalls that since the revolution, more than 2,000 people have been sentenced and jailed for their political views. "No one in Egypt can freely express their opinions and there is no freedom of assembly," he continues. Anyone who demonstrated against the prevailing conditions was persecuted and killed. More than 12,000 citizens have been arrested, according to Nabil. 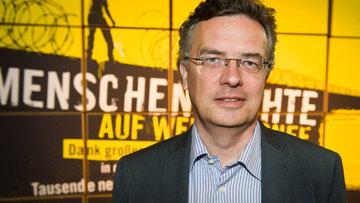 Relieved at Nabil’s release from jail: "I was very worried that he would suffer both physical and emotional damage during his incarceration and through his hunger strike," explained German government human rights commissioner Markus Löning

​​In addition to this, the evolution of civil society is being massively obstructed, says Nabil. Egyptian and international human rights organisations are being severely restricted in their work, and in some cases even banned. As a result, it was impossible to arrange for democratic groups to monitor the presidential poll.

Maikel Nabil also met with the German government’s commissioner for human rights Markus Löning last Wednesday. Like a number of other western states, Germany had lobbied for the young blogger’s release from prison.

Löning had attempted in vain to visit him in prison late last year. Speaking after their meeting in Berlin, Löning said he had been keeping a close eye on the blogger’s case over a period of many months. "I was very worried that he would suffer both physical and emotional damage during his incarceration and through his hunger strike. That makes me all the more content today to see him healthy and politically active again."

Conscientious objector and critic of the military

Maikel Nabil, who had already served time as a conscientious objector before the start of the revolution, was arrested in March last year and initially sentenced by a military court to three years in prison. This punishment was later reduced to two years. He was accused of insulting the army, disseminating false information and undermining public security. He had published articles on Facebook and his blog, questioning whether the military represented the interests of the people. 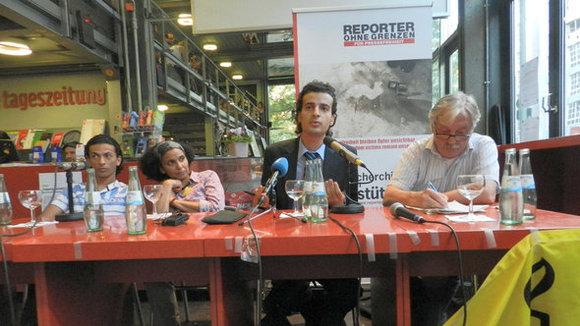 "We may have got rid of the dictator, but not the dictatorship": 26-year-old Maikel Nabil Sanad published reports critical of the military during the revolution and was the first blogger to be arrested following the resignation of Hosni Mubarak. A military court sentenced him to three years in prison for libel in April 2011, but he was pardoned and released on 25 January

​​"The army has never been on the side of the people," he wrote. "We may have got rid of the dictator, but not the dictatorship." Nabil began a hunger strike in August last year that soon became life threatening after he also refused water and medication.

Following massive protests by human rights groups in Egypt and abroad, he was eventually pardoned and freed in January 2012, on the first anniversary of the revolution.

"The army realised I would do them more damage if I was in prison, than if they set me free," says Maikel Nabil during his visit to Berlin. Bolstered by such levels of support, he has in the meantime been able to express his views relatively freely and travel abroad.

Things look rather different for his younger brother Mark, who supported him throughout his time in jail, campaigned for his release and who is now accompanying him on his trip to Berlin. Now his activities are being hampered by the Egyptian authorities.

Algeria‘s regime is again cracking down on anti-fracking activists and the unemployed in the country‘s south. Yet EU countries remain keen to scale up their energy cooperation ... END_OF_DOCUMENT_TOKEN_TO_BE_REPLACED

The murder of a female student at Mansoura University in the Nile Delta has sparked a long overdue debate on femicide in Egypt. Karim El-Gawhary reports from Cairo END_OF_DOCUMENT_TOKEN_TO_BE_REPLACED

Syria, Egypt, Saudi Arabia and the UAE are among those countries increasingly misusing cybercrime legislation to silence dissent and curb freedom of speech. Could a new global ... END_OF_DOCUMENT_TOKEN_TO_BE_REPLACED

Egypt hopes to jump-start the action needed to face a warming world when it takes the presidency of major UN climate talks in November, but warns that countries need a "reality ... END_OF_DOCUMENT_TOKEN_TO_BE_REPLACED

A ceasefire has been in effect in Libya for the past year and a half. Yet after Russia's attack on Ukraine, another proxy war looms in Africa's most oil-rich country. Mirco ... END_OF_DOCUMENT_TOKEN_TO_BE_REPLACED

It is the biggest order in the history of the Siemens Group: a 2,000-kilometre railway network for high-speed trains is to be built in Egypt. But the project raises numerous ... END_OF_DOCUMENT_TOKEN_TO_BE_REPLACED
Author:
Bettina Marx
Date:
Mail:
Send via mail

END_OF_DOCUMENT_TOKEN_TO_BE_REPLACED
Social media
and networks
Subscribe to our
newsletter