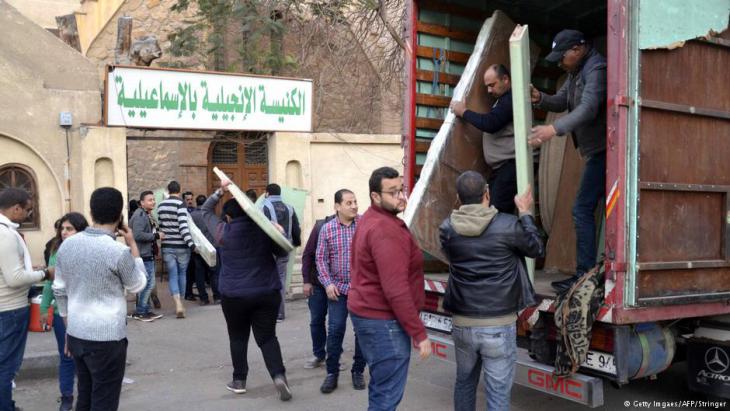 Egyptian Copts flee the Sinai
"They're slaughtering us like chickens"

Christians living in the Sinai are an easy target for IS jihadists. They began carrying out a series of murders aimed at intimidating the religious minority and causing panic. The result is a Christian exodus from the northern Sinai. Karim El-Gawhary reports from Ismailia

In the small Evangelical church in the Egyptian town of Ismailia on the Suez Canal, half a dozen Christian families wait to see what fate has in store for them next. They are among those Christians who have, over the past few days, fled IS terror in North Sinai. The older people look tired, sit around on chairs and drink tea. A few children are playing football.

They have fled from El Arish, the largest city in North Sinai, which is less than two hours by car from here. For years the city has been the scene of fighting between militant IS jihadists and the Egyptian army, which has already lost hundreds of soldiers.  No one knows how many people have been killed on the other side and whether those victims really were militant Islamists. The media are de facto barred from North Sinai.

Then two weeks ago, reports arrived in Cairo that gave the conflict a new dimension. This was the point when they began killing Christians. Unlike the military, these Coptic Christian families living in North Sinai were an easy target for the militants. The murders always followed the same format. A handful of masked men arrived at the home or workplace of Christians and executed them in cold blood. At the same time, IS released a new propaganda video warning of its continued "campaign against Christians and crusaders" in Egypt, after bombing a Coptic Christian cathedral in Cairo last December and killing 28 people attending a Sunday service.

A Christian exodus from North Sinai

Now the terror is being aimed against Christians in the North Sinai Governorate. "They've killed seven or eight Christians in the past few days alone," says Coptic grocer Adel Munir, who sits with his wife in the church courtyard after arriving in Ismailia three days ago. "They slaughtered us like chickens. How can we stay in El Arish? They suddenly appear in your house, their car is waiting outside with the engine running and then you're executed," he continues, describing the IS approach that has triggered outright panic among Christians in North Sinai and resulted in a mass exodus. 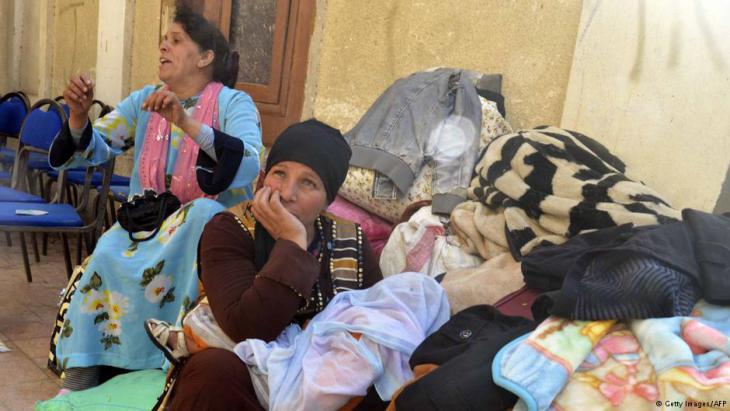 Hunting Copts: in the face of brutal attacks by IS jihadists, hundreds of Copts have fled the Sinai peninsula. Many of them have sought refuge in Ismailia on the Suez Canal, where one single church has offered temporary shelter to some 250 Coptic refugees. Egypt′s minority has been the focus of radical Islamist aggression for years. A recent video in which the jihadist militia IS called upon its supporters to attack Copts is thought to have triggered the current escalation in violence

Of the 160 Coptic families living in North Sinai, around 100 arrived in Ismailia over a period of three days. For them, the Suez Canal is the dividing line between IS terror and safety. Adel says that for Christians in the North Sinai, life has gradually become more difficult in recent years. He summarises the past few years thus: firstly, they stole a piece of land, later his motorbike and then threatened to abduct his daughter. His family were repeatedly insulted as "infidels".

He is on friendly terms with many Muslims in El Arish, but even they are afraid of the IS jihadists. And then, he continues, the first death lists of Christian names began to circulate. Adel is furious, not only about the displacement of his family, but also with the Egyptian state. "Where are the security forces, where is the provincial administration, where is the government in Cairo?" he asks.

He has barely finished talking when a young man comes up. He still has family in El Arish and wants to remain anonymous. Then he begins to talk. For example, about Dr. Bahgat the Christian vet, shot dead in his practice by a group of hooded men. Or Gamal the teacher, whose name they called out at the bazaar. When he turned around, they executed him in front of everyone. Or Midhat and his father, a poor Christian family. They knocked on the door, shot the father when he opened it and later the son in the house, which they then set on fire. Charred remains were all that was left – no bodies to bury, says the young man bitterly.

Several small trucks pull up outside the church with donations from the people of Ismailia. A group of young people help to unload food, clothing and furniture. The youngsters know each other from the era of the anti-Mubarak rebellion. The group also includes the young Hadeer Bakr, who's wearing a brightly coloured necklace and an equally vibrant headscarf. "Most of those helping out here are Muslims. There are no problems between us, the Christians are our friends," she says. "If there are problems, then these are between ourselves and IS," adds the Muslim woman, who is studying law. 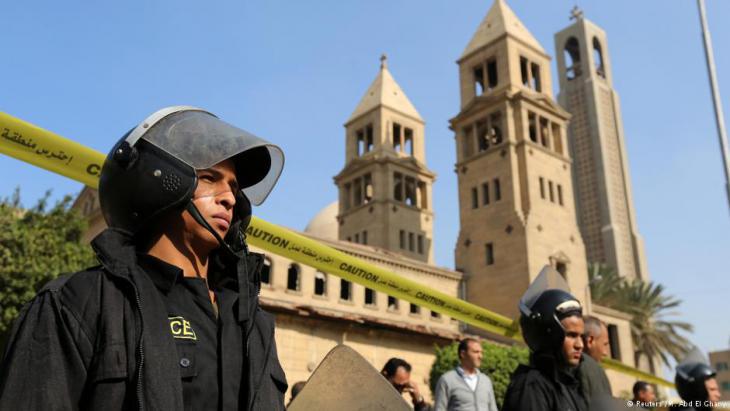 The Copts are the largest Christian community in the Middle East and account for approximately ten percent of Egypt′s 90 million population. Jihadist groups accuse the Copts of supporting the overthrow of the Islamist former president, Mohammed Morsi, in 2013. On 11 December a suicide bomber blew himself up during a Sunday service being held in the Coptic Church of St. Peter and Paul in Cairo. Twenty seven people lost their lives

The unscrupulous IS death squads

An old woman sits at the entrance to the church, huddled up on a chair, sobbing loudly. She is surrounded by a group of people who are trying to calm her down. "My son Wael, he was standing in our grocery shop and was playing with his mobile phone when they came in, held a gun to his chest and pulled the trigger. He didn't even have time to look up," says Magda Labib.

There was also a pregnant woman in the shop, they dragged her out onto the street and left her lying there, she continues. Then the perpetrators calmly helped themselves to things from the shop, drank cola and ate some crisps before leaving. "What kind of people are they?!" asks Magda. "And where were the police?"

All this took place on a main street in El Arish. None of the people passing by dared to intervene, she says. Then her voice cracks, as the tears stream down her cheeks. "They took my son from me. He was everything to me. Where are you now Wael? Who will tap me gently on the shoulder now?" she sobs. "They have broken my heart."

The devaluation of the Egyptian pound combined with rising food prices is taking its toll on Egypt. More and more people are slipping into poverty. Karim El-Gawhary reports from ... END_OF_DOCUMENT_TOKEN_TO_BE_REPLACED

Abortions are illegal in Egypt unless they are necessary to save a married woman's life. But that doesn't stop local women from having one. Egyptian society needs to acknowledge ... END_OF_DOCUMENT_TOKEN_TO_BE_REPLACED

Food prices doubled, salaries halved, banks restricting withdrawals: Egyptians now have the same problems as the Lebanese. But if things get worse here, the fallout will be far ... END_OF_DOCUMENT_TOKEN_TO_BE_REPLACED

Giessen, Eichsfeld, Kusel, Berlin – cars bearing old German number plates are the latest trend on the streets of Cairo. Many Egyptians regard the discarded plates as chic. What ... END_OF_DOCUMENT_TOKEN_TO_BE_REPLACED

Egyptian Sufis have been on the defensive against the country's Islamists for decades. Meanwhile, interest in mysticism is growing among the young members of Cairo’s middle and ... END_OF_DOCUMENT_TOKEN_TO_BE_REPLACED

END_OF_DOCUMENT_TOKEN_TO_BE_REPLACED
Social media
and networks
Subscribe to our
newsletter