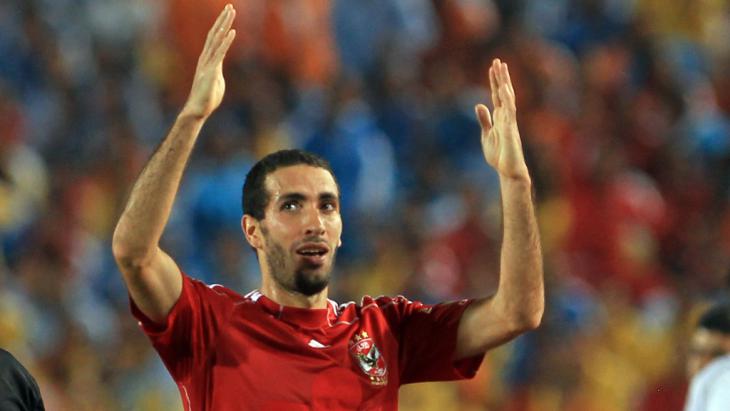 Few are able to bridge Egypt's deeply polarising divide between supporters and opponents of the Muslim Brotherhood following the 2013 military coup that toppled President Mohammed Morsi. Mohammed Aboutreika, Egypt's most celebrated and storied soccer player, is proving to be either the exception that proves the rule or an indication of shifting attitudes. By James M. Dorsey

Breaking the mould was always part of Mohammed Aboutreika's trademark. He was revered for having been declared African footballer of the year four times and having been instrumental in securing storied Cairo club Al Ahli SC's multiple African and Egyptian titles as well as many of the Egyptian national team's trophies despite controversy over his refusal to hide his Islamist and pro-Palestinian inclinations and support for Ultras Ahlawy, the militant, highly politicised Al Ahli support group that played a key role in the 2011 popular uprising and subsequent anti-government protests.

The outpouring of support following the freezing of the assets of a travel agency that he owns demonstrates not only Mr Aboutreika's continued popularity since his retirement in 2013 but also his ability to rise above Egypt's deep-seated fault lines. Among those who spoke out in favour of Mr Aboutreika were many of his fellow players, a group that has historically been careful to remain on the political sidelines and was glaringly absent during the popular revolt that toppled President Hosni Mubarak in 2011 and the mass protests that led to the overthrow of Mohammed Morsi in 2013.

Soccer players, who were feted by autocratic leaders and managers appointed by their regimes, long seemed the epitome of American-Palestinian scholar Hisham Sharabi's notion of neo-patriarchism, which he developed in a controversial 1992 book that is still banned in many Arab countries. 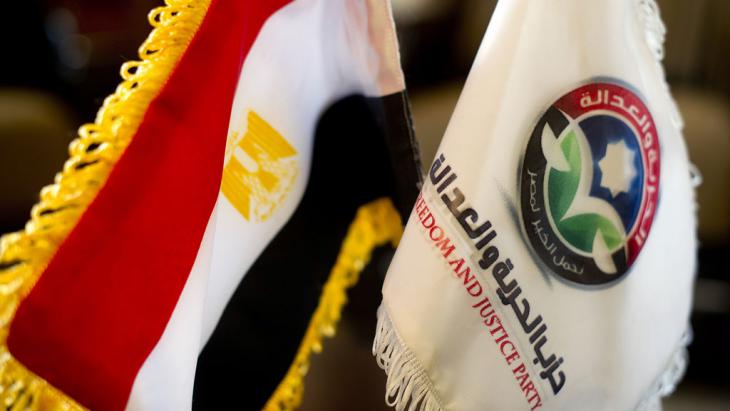 An Egyptian flag next to a flag of the Freedom and Justice Party, the political arm of Muslim Brotherhood. Recently, Egyptian authorities froze the assets of a travel agency owned by Mohammed Aboutreika on suspicion of funding the Muslim Brotherhood, which has been designated a terrorist organisation. The company's director was also arrested on suspicion of having funded violent attacks. These moves caused an uproar and resulted in an outpouring of support for the former footballer

Mr Sharabi argued that Arab society was built on the dominance of the Father (patriarch) around which the national as well as the nuclear family were organised. Between ruler and ruled, between father and child, there existed only vertical relations: in both settings, the paternal will was absolute, mediated in both the society and the family by a forced consensus based on ritual and coercion.

In other words, according to Mr Sharabi, Arab regimes franchised repression so that in a culturally patrimonial society, the oppressed participated in their repression and denial of rights. The regime's leader was in effect the father of all fathers at the top of the pyramid.

The identification of the deposed leaders of Egypt, Yemen and Libya – Hosni Mubarak, Ali Abdullah Saleh and Muammar al-Gaddafi – as well as former Iranian President Mahmoud Ahmadinejad and some of those that have succeeded them with their country's national soccer teams turned their successes and failures into barometers of how their regimes were faring.

They also turned celebrated soccer players and managers into regime supporters who saw the autocrat as their father figure. Egyptian players – apart from Aboutreika, who endorsed Morsi's presidential candidacy and Al Ahli striker Ahmed Abdel Zaher – were no exception. Abdel Zaher was sanctioned in November 2013 after he showed the four-finger sign raised by opponents of the coup in memory of the hundreds who were killed three months earlier when security forces broke up a Muslim Brotherhood sit-in on Cairo's Rabaa Al-Adawiya Square.

Response to the freezing of the assets of Asshab Tours by the committee tasked with confiscating property of the brotherhood, which has been designated a terrorist organisation, and the arrest of the company's director on suspicion of having funded violent attacks broke the Sharabi mould. The freezing galvanised the soccer community in a country in which football is a national craze. 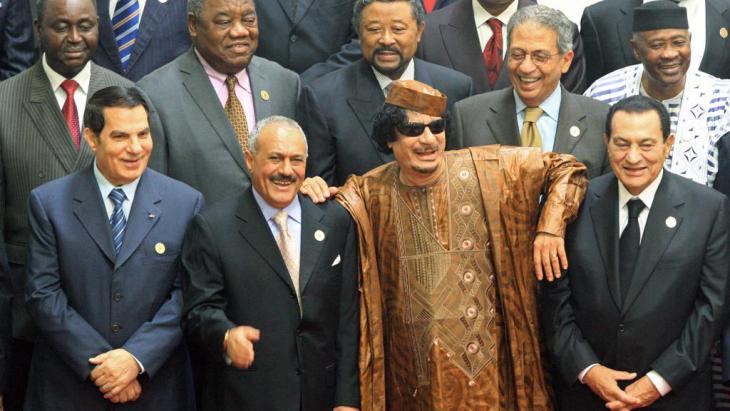 Front row from left: Zine el-Abidine Ben Ali, Ali Abdullah Saleh, Muammar al-Gaddafi and Hosni Mubarak. According to James M. Dorsey, the deposed leaders of Egypt, Yemen and Libya, former Iranian President Mahmoud Ahmadinejad and some of those that have succeeded them identified with their country's national soccer teams and turned their successes and failures into barometers of how their regimes were faring

Support for Aboutreika across the divide

Asshab Tours was one of eight travel companies targeted by the committee. Pro-government media asserted Mr Aboutreika had established Asshab Tours in 2013 with the explicit purpose of funding the brotherhood. The freezing followed repeated attacks on Aboutreika by pro-government sports journalists that focused on his alleged links to the brotherhood.

Aboutreika set off the uproar on social media by tweeting that "money comes to our hands, not our hearts. You can seize whatever funds you want, but I will never leave Egypt." Amid a multitude of pro-Aboutreika hashtags, Egyptian blogger Zeinobia noted that pro-government tweeters had countered with a hashtag identifying Aboutreika as a Muslim Brotherhood sheep.

In response to the attacks, former Ahli player Sayed Muawad wrote on Twitter: "I love you for the sake of Allah." Egyptian national team director Ahmed Hassan added that "apart from personal, political loyalty, I will continue to bear witness that this person upholds the highest moral standards until the end of my life" and Wadi Degla player Ahmed al-Mirghani warned that "freezing Treika's funds is catastrophic".

Al Zamalek Omar Gaber midfielder declared, "I'm so proud to have played with a legend such as yourself" in the Egyptian national squad. National team and Al Ahli goalkeeper Sherif Ekramy chimed in saying that "no one can doubt his national loyalty as well as his humane treatment of others. His money and sources of his income are an open book for all. Your place in Egyptian hearts is enough." 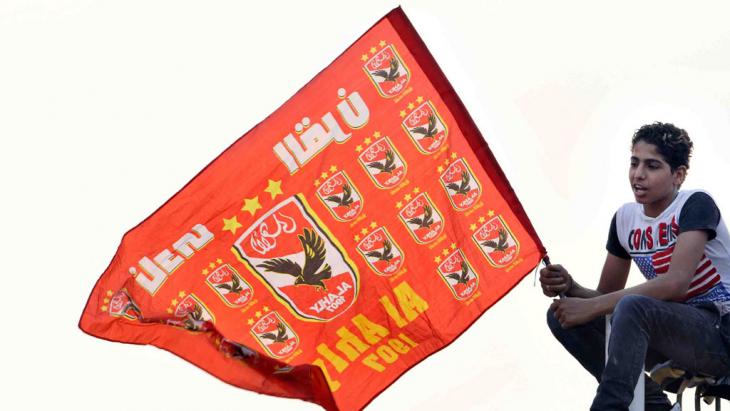 According to James M. Dorsey, Mohammed Aboutreika, who himself played for Cairo club Al Ahli SC, never made any bones of his Islamist and pro-Palestinian inclinations and support for Ultras Ahlawy, the militant, highly politicised Al Ahli support group that played a key role in the 2011 popular uprising and subsequent anti-government protests

Mohammed Aboutreika's popularity is as much a result of his soccer feats, including last-minute goals, as of his willingness to speak out on issues that stirred national emotions such as the publication in Europe of cartoons depicting the Prophet Mohammed that many in the Muslim world deemed disrespectful and blasphemy or the Israeli-Egyptian blockade of the Gaza Strip. "We sacrifice our lives for you, Muhammad," read Mr Aboutreika's T-shirt which he bared on the pitch after taking off his jersey off during the cartoon crisis. "Sympathise with Gaza," was Mr Aboutreika's message when he did the same in support of the Palestinians.

Aboutreika was outspoken in his support for Ultras Ahlawy after 74 of its members were killed in 2012 in a politically-loaded soccer brawl in Port Said in which many believe that the military and security forces acquiesced in a bid to teach militant soccer fans a lesson.

Aboutreika refused at the time to shake the hand of Field Marshal Mohamed Hussein Tantawi, the then head of the Supreme Council of the Armed Forces (SCAF) that governed the country during the transition from Mubarak to Morsi's election. "I was unhappy with the country's situation," said Aboutreika.

James M. Dorsey is a senior fellow at the S. Rajaratnam School of International Studies as Nanyang Technological University in Singapore, co-director of the Institute of Fan Culture of the University of Wurzburg and the author of the blog, The Turbulent World of Middle East Soccer, and a forthcoming book with the same title.

Alaa Abd el-Fattah, arguably Egypt’s most prominent democracy activist, has just been handed another lengthy prison sentence. Despite this, a book of his writing has recently been ... END_OF_DOCUMENT_TOKEN_TO_BE_REPLACED

People in Arab countries have been talking more openly about sex and sexuality for some time now, especially on social media. And for the first time ever, they have the vocabulary ... END_OF_DOCUMENT_TOKEN_TO_BE_REPLACED

A prominent rights group in Egypt, the Arabic Network for Human Rights, is ending operations just as the country braces for a controversial NGO law. Is this the beginning of the ... END_OF_DOCUMENT_TOKEN_TO_BE_REPLACED

Moncef Marzouki was Tunisia's first democratically elected president after the fall of dictator Ben Ali. Today he is the most prominent critic of increasingly counter- ... END_OF_DOCUMENT_TOKEN_TO_BE_REPLACED

Asef Bayat, professor of Sociology at the University of Illinois, Urbana-Champaign, has been studying revolutions and how they affect people since 1979. In his recent book, " ... END_OF_DOCUMENT_TOKEN_TO_BE_REPLACED

Every year in December, the team at Qantara.de takes a look back at the articles that proved most popular with our readers. This year is no different. Here is a run-down of the ... END_OF_DOCUMENT_TOKEN_TO_BE_REPLACED
Author:
James M. Dorsey
Date:
Mail:
Send via mail

END_OF_DOCUMENT_TOKEN_TO_BE_REPLACED
Social media
and networks
Subscribe to our
newsletter