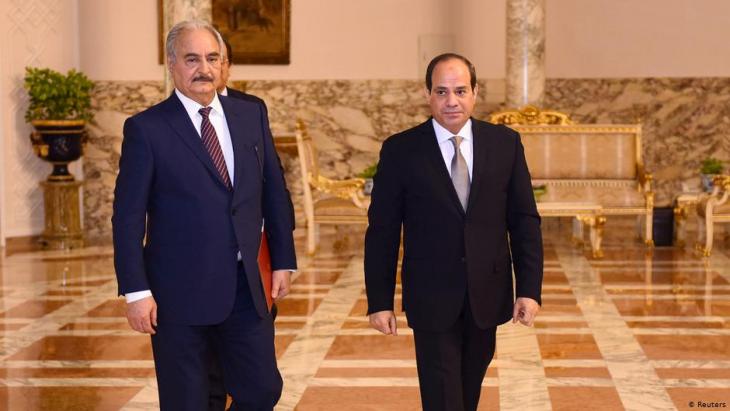 Political analyst Taqadum al-Khatib argues that Egypt can, in co-ordination with its European partners, develop a common vision to solve the complex conflict in Libya. For this to happen, however, Egypt must disengage its foreign policy from that of the UAE and Saudi Arabia

Since the uprisings in the Middle East, Egyptian foreign policy has seen a change in direction, falling into step with the policy decisions made by those countries opposed to the Arab Spring. This axis is led by the UAE and Saudi Arabia; Egypt’s role has shifted from one of leadership to that of a subordinate.

This shift is reflected in Egypt's foreign interests and national security. The first manifestation of this transformation and its damaging consequences was the concession of the islands of Tiran and Sanafir to Saudi Arabia in 2016; the islands are of strategic significance to the Sinai Peninsula and to Egypt's national security.

In a similar vein today, the complex Libyan crisis is having repercussions for Egypt’s security and is bound to become a threat on its western borders. From the first moment – as Egypt joined the axis of counter-revolution in supporting General Khalifa Haftar's forces against the internationally recognised government – Cairo sacrificed any leading role it might have played in finding a resolution. Egypt could have been a mediator between the conflicting parties, playing any number of cards to de-escalate the situation and to move towards a political solution.

Owing to the complexities on the ground and the escalating military confrontation, the situation in Libya today is so complex that the international community has so far failed to get to grips with it. The conflict now involves multiple parties: there is the Egyptian-Saudi-Emirati alliance facing the Turkish-Qatari alliance, and there is the Franco-Italian struggle alongside Russia’s anti-American agenda.

These conflicting and contradictory agendas in Libya represent a stumbling block in the way of any solution, and they underline the international community’s impotence. At the same time, the struggle has spread to the EU, which had been entrusted with finding a solution, but the rivalry between France and Italy, the old colonial powers in Libya, is complicating the EU’s task.

Whilst the French government has publicly adopted a position of support for the legitimate government of al-Sarraj, it has been secretly pursuing another agenda of support for Haftar's forces and his military campaigns. By contrast, Italy has adopted a different position in defiance of France and in line with its view of Libya as one of its former colonies, to which it retains "a historical right".

This conflict of interests has prevented a peaceful solution frorm being reached. Indeed, it has obliged the German government led by Chancellor Merkel to make numerous efforts to bring the French and Italian adversaries together, albeit such efforts have been in vain to date. Indeed, there are growing doubts as to whether the Berlin conference scheduled for Sunday 19 January will enable the parties to find a solution which is acceptable to all.

In a new development, Turkey has entered the fray; ideologically against the counter-revolution, it is sending forces to support the government of al-Sarraj. This Turkish military support is not new, nor are the Egyptian and Emirati weapons’ flows to the Haftar camp. Erdogan's support for al-Sarraj is not only military in nature, but also political, lending his country diplomatic cover in international fora. The conflict in Libya is now balanced between East and West, while accurately reflecting the struggle between opposing political agendas in the Middle East.And what about Egypt?

In all of this, Egypt still is not thinking in terms of its own national security, with Libya as an extension of its western flank. It continues to pursue a foreign policy that is mortgaged to the policy of the UAE, without proper regard for Egypt’s own security and status.

Egypt still does not have a coherent vision or a clearly defined position vis a vis Libya. Meanwhile the Sisi regime's media continues to promote demagoguery, without any proper understanding of the meaning and significance of national security or of Egypt’s geo-strategic interest. It simply can’t see the importance in setting its own foreign policy agenda and its own priorities. Moreover, it promotes the word of institutions in Libya where the concept is unknown.

The most serious point, to which Egyptian decision-makers and policymakers are oblivious, is that the conflict in Libya is more akin to the situation which existed in Somalia, than that which exists in Syria today. This is because the parties that were united in agreement in respect of Syria, are the very ones which are in conflict and disagreement in Libya. 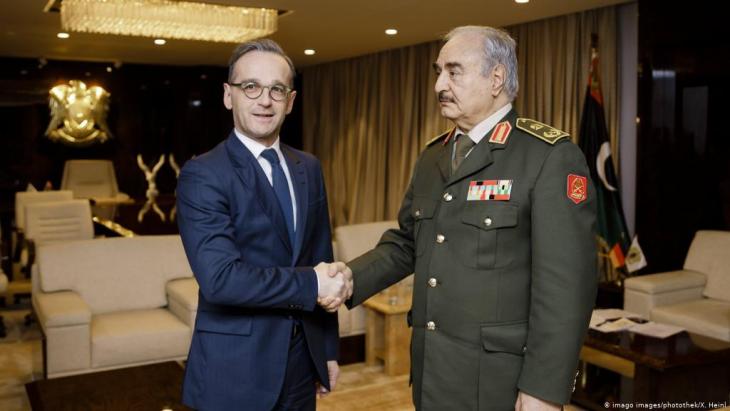 General Haftar gives his word: Merkel's foreign minister, Heiko Maas, visited Libya's eastern city of Benghazi on Thursday to press Haftar to attend the conference in the German capital on Sunday. After their meeting, Maas tweeted that Haftar had agreed in principle to accept the invitation and “contribute to making it a success"

Hence it is more likely that Libya will become a new Somalia, and the scene is closer to the situation in 1994 when Mohammed Farah Aidid entered the Somali capital, Mogadishu: it resulted in the fragmentation of society and the disintegration of the state.

Egypt doesn't need a second Somalia on its doorstep

Given the internal and external crises that Egypt is facing, there is no way it could bear the cost of a new Somalia (that is to say, a failed state) on its western border. It would be catastrophic were Libya to become a base for extremist groups and political opponents. Turkey, for one, would use the situation very obviously to put Egypt under pressure and threaten its security.

Egypt could, in co-ordination with the Europeans, find common ground and a settlement in Libya, at a time when the Turkish president's relationship with the Europeans is deteriorating. Europe particularly feels let down over the issue of immigration and the opening of borders, especially as President Erdogan has repeatedly threatened Europe with the opening of Turkey’s borders, which would doubtless trigger a new flood of refugees.

In other words, Erdogan’s move into Libya means that he will hold another important card relating to illegal immigration from the Libyan coast, and he may well use it to apply political pressure on the Europeans. Egypt would therefore be well-advised to show solidarity with the Europeans over this and push for a settlement, starting from the principle that, in politics, there are no enemies and no friends. In this way, Egypt could initiate a dialogue with Turkey over the situation in Libya, with the aim of playing a key role in the quest to resolve the conflict.

None of this will happen, however, unless Egypt can disengage its foreign policy from that of the UAE and Saudi Arabia. If Libya does indeed become a new Somalia on Egypt’s western border, neither the UAE nor Saudi Arabia will be affected; the main victim will be Egypt and its national security.

Decades after the first French nuclear test in Algeria, thousands of victims are still waiting for compensation. To date only 51 claims have been filed under French legislation ... END_OF_DOCUMENT_TOKEN_TO_BE_REPLACED

Few would have thought that Algeria's Hirak protest movement would still be mobilising the masses 12 months on from its first peaceful demonstration. According to Isabelle ... END_OF_DOCUMENT_TOKEN_TO_BE_REPLACED

Having seen a sharp decline in its influence in Tunisia and Algeria, France is eyeing China and Spain’s growing economic presence in Morocco with concern. Is Paris about to lose ... END_OF_DOCUMENT_TOKEN_TO_BE_REPLACED

Insults directed against Egyptian President Abdul Fattah al-Sisi have been particularly prominent among the hundreds of chants by Arab protestors in Algeria, Sudan, Iraq and ... END_OF_DOCUMENT_TOKEN_TO_BE_REPLACED

The upheavals of the past year in the MENA region are arguably as momentous as those of the Arab Spring in 2011. Yet perhaps the biggest difference is that our interest seems to ... END_OF_DOCUMENT_TOKEN_TO_BE_REPLACED

Algeria's political impasse has been going on for weeks. Attempts to calm the public mood by sacrificing some of the Bouteflika faithful has only served to fuel demonstrators' ... END_OF_DOCUMENT_TOKEN_TO_BE_REPLACED
Author:
Taqadum al-Khatib
Date:
Mail:
Send via mail

END_OF_DOCUMENT_TOKEN_TO_BE_REPLACED
Social media
and networks
Subscribe to our
newsletter