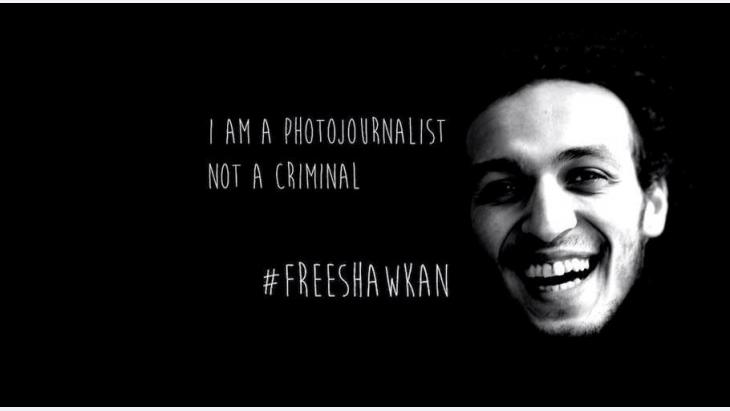 Mahmoud Abu Zeid, known as Shawkan, took some photographs at a Muslim Brotherhood demonstration. As a result he has spent almost four years in prison – without any verdict having been passed. By Karim El-Gawhary

The trial is adjourned for the third time. Without any hearing. It′s May 2017, in the courtroom of the special court in Egypt′s Tora Prison. Mahmoud Abu Zeid, known professionally as Shawkan, has been behind bars for three and a half years, accused of belonging to a terrorist organisation. But Shawkan is a photographer – and that is exactly what has sealed his fate.

On 14th August 2013, Shawkan went to Rabaa Adawiya Square in Cairo as a press photographer, on an assignment to take pictures of a Muslim Brotherhood protest camp for a photo agency. He found himself behind the line of the security services when the army and police broke up the camp. At the time, official reports spoke of hundreds of deaths; Human Rights Watch claims there were over a thousand and has called the bloodbath "Egypt′s Tiananmen", with reference to the Chinese massacre of 1989. Many of the demonstrators in Rabaa Adawiya Square in 2013 were shot by snipers and numerous others were arrested. As was Shawkan, the photographer, along with one French and one American colleague. Both were released the same day. Shawkan, however, is still in prison.

Outside the courtroom Shawkan′s brother, Muhammad Abu Zeid, is looking visibly disappointed. He visits his brother in prison once a week. "He′s not doing well. He′s depressed and suffering from Hepatitis C and anaemia, which aren′t being properly treated," he says. Shawkan shares a cell with 22 other people. They are allowed out for exercise once or twice a week. The rest of the time he spends penned in, his brother tells us.

The crime of photography

The trial against Shawkan and 400 other people began eighteen months ago, two full years after he was arrested. They are all charged with being members of the Muslim Brotherhood. The fact that, unlike most of his fellow defendants, Shawkan attended the protest as a reporter, not a demonstrator, seems to carry no weight with the court. 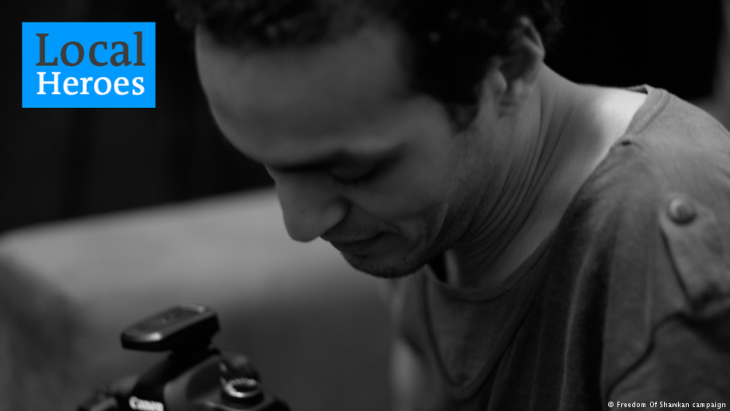 A thorn in the side of the Egyptian authorities: Egyptian photojournalist Mahmoud Abu Seid has been held without charge since August 2013. The photographer, who achieved acclaim under the pseudonym Shawkan, had worked as a freelancer for international media such as the photo agencies Demotix and Corbis. He was arrested on 14 August 2014, while reporting on the violent break-up of protest camps inhabited by supporters of the ousted President Mohammed Morsi

The judge has refused to admit as evidence the documents provided by Shawkan′s lawyers to prove that he was working under commission for the Demotix photo agency that day. Shawkan′s camera was confiscated during his arrest, together with the photos he had taken of the protest camp. It has since disappeared.

"I was just taking photos, your honour; that′s not a crime," Shawkan said in his defence during the trial. "I was doing exactly the same as the photographers here in the courtroom, many of whom I know personally."

Legally, after two years in custody without any verdict having been passed, Shawkan should have been released, says his lawyer Karim Abdel Radi. The court simply ignored this. In all that time, not one single piece of evidence had been presented to show that Shawkan was doing anything other than his job, Abdel Radi goes on. He says there are also no grounds whatsoever for the charge that he is a member of the Muslim Brotherhood. In fact, Shawkan was well-known for being politically opposed to them: he took part in demonstrations against Mohammed Morsi, the Muslim Brother who was elected president after Mubarak was toppled in 2011. Morsi was deposed by the military in 2013.

Since the fall of the Muslim Brotherhood, the government and justice system has been systematically taking action against media and journalists they suspect of having connections to, or even just sympathies for, the organisation. On the latest press freedom world map produced by Reporters Without Borders, Egypt is coloured entirely black. That means the situation for journalists is "very serious". The non-governmental organisation ranks the country at number 161 in the world. It says local journalists are particularly at risk. Many have found themselves locked up for years, often without charge. For this reason, self-censorship is widespread in the media. "Many openly side with the army and the government; only a few Egyptian journalists dare to say anything critical," says Reporters Without Borders. 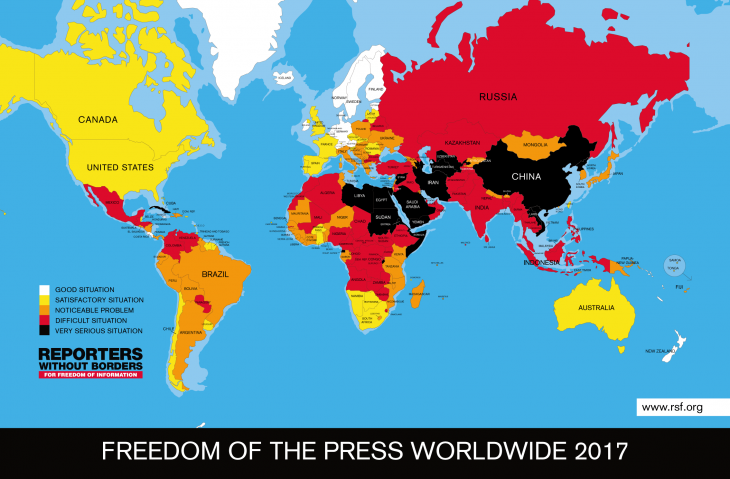 Situation bleak for media professionals: the latest world map released by Reporters without Borders on press freedom shows Egypt in black. This means the situation is "very serious " for journalists. The NGO places Egypt 161st on the list. Local journalists are particularly at risk. The danger of going to prison for years, often without charge, is very real

Journalists who get arrested are not directly charged because of their work, however, says Abdel Radi. "They invent some reason so they don′t have to admit that the imprisonment has to do with their job." The lawyer thinks that Shawkan may well be found innocent in the end. "But the long period of imprisonment is their way of punishing him for his work."

Amnesty International is not the only organisation that has now taken up the case. Many people have shown their solidarity on the Facebook page "Freedom for Shawkan". He used to print out the messages he got there for Shawkan′s release, his brother Muhammad Abu Zeid says. But he′s not allowed to bring them into the prison any more. "Now I learn them off by heart, so I can relay them to him."

Sometimes it has also been possible to smuggle a letter from Shawkan out of prison. In one of these, Shawkan appeals to all photographers across the world: "Fight for photography. We are the people who have made history, not the historians, our photos have captured the moment," he writes and ends with: "I beg you all: never stop taking pictures – for me."

On this day in May, once again there has been no movement in Shawkan′s case. "When I visit him, he asks me what′s happening in the trial," says his brother. "What can I tell him?"

Perhaps he can say there has been a tiny glimmer of progress: the court has admitted a medical report on the state of Shawkan′s health to the files.

Alaa Abd el-Fattah, arguably Egypt’s most prominent democracy activist, has just been handed another lengthy prison sentence. Despite this, a book of his writing has recently been ... END_OF_DOCUMENT_TOKEN_TO_BE_REPLACED

A prominent rights group in Egypt, the Arabic Network for Human Rights, is ending operations just as the country braces for a controversial NGO law. Is this the beginning of the ... END_OF_DOCUMENT_TOKEN_TO_BE_REPLACED

Moncef Marzouki was Tunisia's first democratically elected president after the fall of dictator Ben Ali. Today he is the most prominent critic of increasingly counter- ... END_OF_DOCUMENT_TOKEN_TO_BE_REPLACED

Asef Bayat, professor of Sociology at the University of Illinois, Urbana-Champaign, has been studying revolutions and how they affect people since 1979. In his recent book, " ... END_OF_DOCUMENT_TOKEN_TO_BE_REPLACED

Every year in December, the team at Qantara.de takes a look back at the articles that proved most popular with our readers. This year is no different. Here is a run-down of the ... END_OF_DOCUMENT_TOKEN_TO_BE_REPLACED

In this new bilingual edition, translated by Humphrey Davies, al-Jawbari, one of the thirteenth century's leading experts in skullduggery reveals all there is to know about the ... END_OF_DOCUMENT_TOKEN_TO_BE_REPLACED
Author:
Karim El-Gawhary
Date:
Mail:
Send via mail

END_OF_DOCUMENT_TOKEN_TO_BE_REPLACED
Social media
and networks
Subscribe to our
newsletter