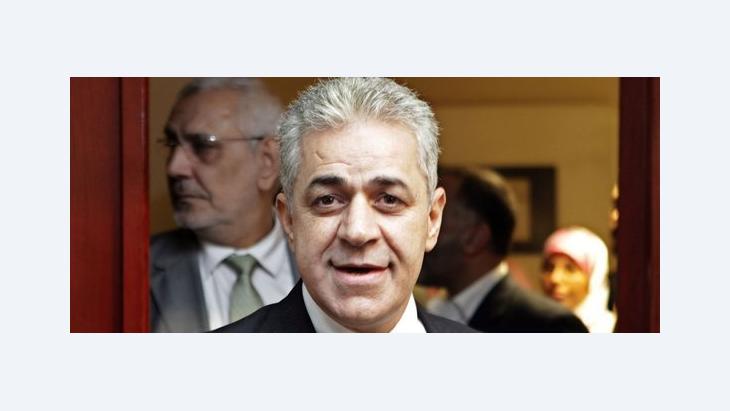 Up until recently, the chances of Hamdeen Sabahi were considered slim. But new polls suggest the left-leaning social activist is now one of the top contenders for the presidential office. Joseph Mayton met up with the idiosyncratic politician in Cairo

A few months ago, Hamdeen Sabahi was the pariah of the Egyptian presidential race, garnering little attention and lacking any hope that he could become a factor in the May 23-24 vote. Now, Sabahi has shown his determination to get his message out and this has resulted in a skyrocketing of possibilities for the quiet, down to earth man.

"I think we have seen a lot of changes in the way people are looking at the presidential office, and this has given me the chance to reach more people," he says in his Cairo office, as his staffers ran to and fro planning his next event.

Sabahi profile keeps getting larger as well, and his tireless fight for the poor and impoverished in Egypt is paying off, with a number of youth movements in the past two weeks throwing their support and weight behind his candidacy. For Sabahi, the leftist leader who speaks of social justice on a daily basis, this is a sign that Egyptians want change.

"I speak for all Egyptians and my campaign has always been for the poor and the end of the class struggle in Egypt," he continues. "My belief that Egypt can be better is why I am running for president. My plan can help end the poverty in the country." 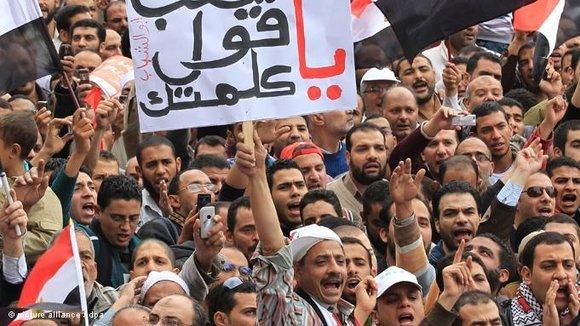 Holding on to the demands of the revolution: Hamdeen Sabahi is supported mainly by youth organizations who took part in the uprising against the Mubarak regime, as well as by social activists who denounce the uneven distribution of wealth in the country

​​"As a new president for a new Egypt, my first decision will be a quick rise in salaries for most of the working citizens in both the public and private sector, and also an aid programme for poor people," Sabahi added.

Fighting against the remnants of the Mubarak regime

Just last week, Sabahi received more support, from the Youth of the Revolution Movement, a conglomeration of youth groups and movements whose goal is to maintain and push the January 25 uprising forward into the presidential palace. For them, Sabahi is the candidate to do that, and to fight against the former remnants of the Hosni Mubarak regime.

The movement, in announcing their support for Sabahi, said he is "the model of an honest and loyal politician, who has a history of struggle as well as distinct political experience that allows him to assume the tasks and serious burdens in the current period to achieve a democratic political project that maintains Egypt's moderate and civil character."

Sabahi seems pleased with the support he has been getting in recent weeks, moving his campaign from an outlier to a serious contender. A recent poll conducted by the Egyptian information service of the Cabinet revealed he is rising in contention, now a solid fourth behind the big three: former Mubarak Prime Minister Ahmed Shafiq, moderate Islamist Abdel Moneim Aboul Fotouh and former Foreign Minister and Arab League Secretary-General Amr Moussa.

But Sabahi argues polls mean nothing, citing the one-third number who are unsure of who they will vote for, or if they will vote at all. His focus is instead on bettering Egypt as the country moves forward on its transition from Mubarak to the military to civilian rule.

At the heart of his message is social justice, which is a large reason he is receiving the backing of social movements, who also espouse a belief that Egypt can achieve a middle-ground of economic progress and justice for the now 90 million strong Egyptian population, many of whom live on around $2 per day. 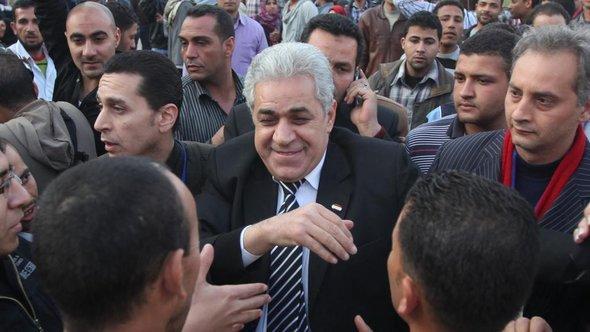 Commitment to the cause of Egypt's farmers and peasants: In the late 1990s, the Mubarak regime passed a law that stripped farmers of their right to own the land that they paid for and maintained, effectively. Sabahi staunchly opposed the enactment of this law and was consequently arrested for and tortured in 1997. Today, Sabahi affirms that "the peasants are the most important class in Egypt"

​​"Regarding the economy and social justice, I hope to establish a state-capitalist Egypt, in which the public and private sectors cooperate with one another. Egyptians should be entitled to eight things: housing, health care, food, free education, work, insurance, a fair wage, and a clean environment," Sabahi continued.

A lack of leadership

Still, what is holding him back from truly entering the top echelons of the political campaign are his lack of leadership and his tacit support for Saddam Hussein's government during the 1990s and early 2000s. Political analysts and some activists are not yet convinced he has the ability to lead the country forward.

Cairo University student and political blogger Ayman Yussif said that for him, Sabahi is an "idealist" but misunderstands where Egypt is heading. "I like the guy, he seems level-headed and says the right things on a daily basis, but one thing that I think he misses is the concept of unity and being able to actually lead the country," he said.

But with only Shafiq and Moussa as candidates with actual leadership roles, Yussif feels the country is caught in a tough position. "Egyptians understand what it means to lead, which is why Moussa is getting a lot of support. He was against Mubarak during the uprising and that has really helped him." But, he says, that isn't the only thing we should be looking at.

Yussif argues that Sabahi needs to show Egyptians that he can lead them into the future. "If he can do this and if people believe him, he could really surprise a lot of people." 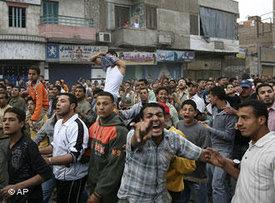 The 2008 protest against President Hosni Mubarak in El-Mahalla El-Kubra are said to have paved the way for the Arab Spring. The workers in the industrial city demanded political transparency and better wages. Sabahi says he would cater to their needs specifically, should he become president

​​And that is exactly what Sabahi hopes to do. He believes his platform of social justice and boosting the poor will resonate among the people. It is just a matter of getting his name out there and his ideas heard.

"I really believe that what I offer is the best for Egypt, or I wouldn't be running," said the former journalist and independent member of Parliament, elected in 2000. "Peasants and agriculture have a special place in my agenda, Egypt mainly is an agricultural country, and I will call off all their debts, which weigh heavily on every Egyptian peasant," he said.

Renegotiating the gas deal with Israel

Sabahi's stalwart belief in Egypt's national sovereignty is another aspect of his campaign that is getting noticed, at least on the ground. "I like the man because I think he is honest," said one café owner, who added that his vote will come down to Sabahi or the Muslim Brotherhood's Mohamed Morsi, an odd combination of left and right candidates.

Sabahi is winning points, and winning them before his counterparts, on his long held position toward Israel. He believes the peace treaty with Israel must be renewed and should give Egypt a greater say in its ability to deal with its borders.

"I will cut off natural gas supplies to Israel, which is not part of the [Camp David] treaty. We have no obligation to export gas to Israel," he said, nevertheless stressing the importance of peace with Israel to Egypt. Statements as these go over well with the general population, who for years have felt as though the treaty with Egypt puts Egypt in a second-class citizen position.

Sabahi says he hopes to rekindle Egypt's position atop the Arab world. "I know that Egypt has enormous potential, we just have to have solid plans and goals to turn this into reality," he added.

Two refugees detained in Egypt are facing deportation to Eritrea. The expulsion of the Eritreans, who have been incarcerated in Cairo for more than eight years, has been halted ... END_OF_DOCUMENT_TOKEN_TO_BE_REPLACED

International relations are shifting across the Middle East as regional powers adapt to America's retrenchment and China's growing influence. Although the region could become the ... END_OF_DOCUMENT_TOKEN_TO_BE_REPLACED

Germany's foreign policy is explicitly values-based. But what happens, Ralf Bosen asks, when democracy, the rule of law and human rights collide with the logic of trade and ... END_OF_DOCUMENT_TOKEN_TO_BE_REPLACED

Egyptian author Nadia Wassef talks about opening the first independent bookstore in her home country; and her latest book in which she celebrates books and booksellers. By Manasi ... END_OF_DOCUMENT_TOKEN_TO_BE_REPLACED

"The people aren’t ready for democracy" has been the constitutional basis for Arab tyranny, its favourite slogan and its sacred narrative for more than a century. Yet, asks Khaled ... END_OF_DOCUMENT_TOKEN_TO_BE_REPLACED

END_OF_DOCUMENT_TOKEN_TO_BE_REPLACED
Social media
and networks
Subscribe to our
newsletter