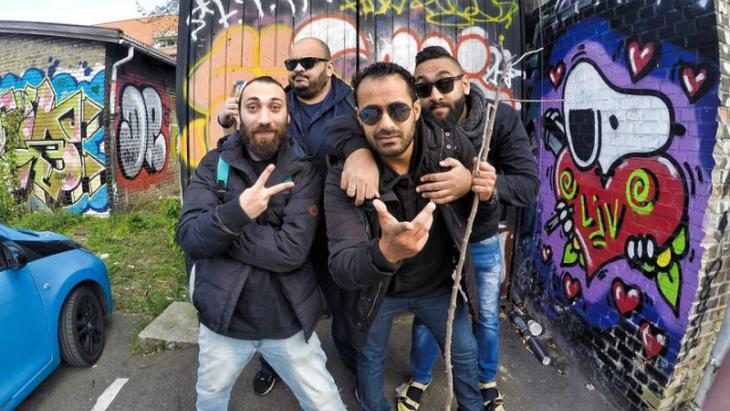 Politically outspoken rappers risk reprisals from the Egyptian state. Some have already been intimidated while others continue to push the boundaries of censorship with their music. Mat Nashed reports from Alexandria

"Egypt Rap School for Biggenas" is plastered across the wall of a tiny recording studio in Alexandria, Egypt. Above it, hang three portraits: Notorious BIG, Bob Marley and Tupac Shakur. Like millions of fans, Temraz – his stage name – grew up listening to these icons.

Now, the 29-year-old Arabic rapper is part of Revolution Records, an underground label that he helped establish in Alexandria 11 years ago. "We decided to name the label Revolution Records because we thought rap still sounded very weird to Egyptian ears," Temraz said, before rolling a cigarette. "We also named it 'revolution' because rap music is about rebelling. To us, rap is about rebelling against everything."

Fourteen artists are signed up with Revolution Records, which is one of many hip-hop movements in Egypt. Cairo, the capital, has a bustling scene. But Alexandria is considered the pioneer of rap music in the country.

Before the Arab Spring, rappers from Alexandria released tracks that mocked social norms and political cronyism among the social elite. The lack of mainstream attention even enabled some artists to push the boundaries of censorship. And while their music was gaining traction, it wasn't popular enough to invite a crackdown from the state. But in today's Egypt, where thousands of youth are in jail for criticising the regime, rapping about politics is riskier than ever.

Shakur is the stage name of a 31-year-old artist who is part of a group called DaCliQue 203. He said that most rappers have been reluctant to ridicule Egypt's President Abdul Fattah al-Sisi. His group, however, is one of few exceptions. In February 2014, DaCliQue 203 released "Ana Malak", which means "I'm the King". The track was a remix of a song that Shakur originally recorded in 2005. The new version was made to mock Sisi, who was in the process of consolidating his power base.

Show me the money

"The lyrics go like this," said Shakur, as he proceeded to recite his impersonation of Sisi. "I'm not on the right and I'm not on the left. I'm not an Islamist nor an anarchist. I just follow the money so show me the money." The song was daring. And yet, Shakur wouldn't record another track for three more years. He said he couldn't bring himself to make another one. Not after his younger brother, a former supporter of the outlawed Muslim Brotherhood, passed away suddenly in his home, just before "Ana Malak" was released.

"We always fought about my love for hip-hop," said Shakur. "My brother thought I was wasting my time. He thought I should be writing articles about politics instead. But at the same time, he remained curious. He always wanted to know about the lyrics I was writing."

While Shakur took a break from hip-hop, other rappers became increasingly political. In April 2016, Revolution Records released "Masahsh Keda" – "That's Not Right" – on YouTube. The group appropriated the phrase from Sisi, who often says it condescendingly when addressing his citizens. The group made a music video for the song and included English subtitles. "We sampled Sisi's voice and incorporated it in our music," explained Temraz. "The track did well when we first uploaded it. It got more than 200,000 likes."

Despite the success, Temraz feared that the song might bring reprisals. After the track was released, members of Revolution Records were invited to Denmark to perform in a concert. Temraz was anxious when he arrived at the Cairo airport. He thought he would be arrested. Lucky for him, nothing happened.

Weeks later, however, the group was informed that "Masahsh Keda" had crossed a line. Their friend, who worked in the presidential palace, warned them that the government wouldn't tolerate another track like that again. "We had to stop," Temraz said. "I have given up trying to change this country for the better."

Not everyone lost hope. Some rappers tried to broach sensitive topics without explicitly blaming the state. Y-Crew, which is one of Egypt's first hip-hop groups, released a track titled "Blinded" nine months ago. The song was about the abuse and violence that street children face in Egypt. "Mainstream music in Egypt is just about love. It doesn't talk about real problems," said Omar Bofolot, one of the original members of Y-Crew. "We want to talk about real stuff. But we don't want to preach to people about what they should do."

The group has recently moved to Dubai to work on their latest album. The rappers admit they are gradually losing hope that their music can have a positive impact in Egypt. "We been rapping about social and political issues since we started," said Shahin, the second member of Y-Crew. "Nothing ever changes and we're getting sick of it. Our next album is just going to promote peace, love and unity."

Shakur, however, isn't going to stop rapping about the issues that matter to him. In January, he released his comeback track. And now, he's writing lyrics about the refugee crisis in Egypt and Europe. Thousands of refugees and Egyptians have died trying to cross the Mediterranean from Alexandria. Shakur knows their stories firsthand. He's been a migration advocate for years and has even collaborated with some refugee rappers in Egypt.

The oppressive political climate doesn't scare him. Even if Egyptian rap becomes more commercial, he vows never to censor himself. "I have to keep it real," he says. "The price may be higher. But Egyptians are paying a heavy price anyway."

Alaa Abd el-Fattah, arguably Egypt’s most prominent democracy activist, has just been handed another lengthy prison sentence. Despite this, a book of his writing has recently been ... END_OF_DOCUMENT_TOKEN_TO_BE_REPLACED

People in Arab countries have been talking more openly about sex and sexuality for some time now, especially on social media. And for the first time ever, they have the vocabulary ... END_OF_DOCUMENT_TOKEN_TO_BE_REPLACED

A prominent rights group in Egypt, the Arabic Network for Human Rights, is ending operations just as the country braces for a controversial NGO law. Is this the beginning of the ... END_OF_DOCUMENT_TOKEN_TO_BE_REPLACED

Moncef Marzouki was Tunisia's first democratically elected president after the fall of dictator Ben Ali. Today he is the most prominent critic of increasingly counter- ... END_OF_DOCUMENT_TOKEN_TO_BE_REPLACED

Asef Bayat, professor of Sociology at the University of Illinois, Urbana-Champaign, has been studying revolutions and how they affect people since 1979. In his recent book, " ... END_OF_DOCUMENT_TOKEN_TO_BE_REPLACED

Every year in December, the team at Qantara.de takes a look back at the articles that proved most popular with our readers. This year is no different. Here is a run-down of the ... END_OF_DOCUMENT_TOKEN_TO_BE_REPLACED
Author:
Mat Nashed
Date:
Mail:
Send via mail

END_OF_DOCUMENT_TOKEN_TO_BE_REPLACED
Social media
and networks
Subscribe to our
newsletter